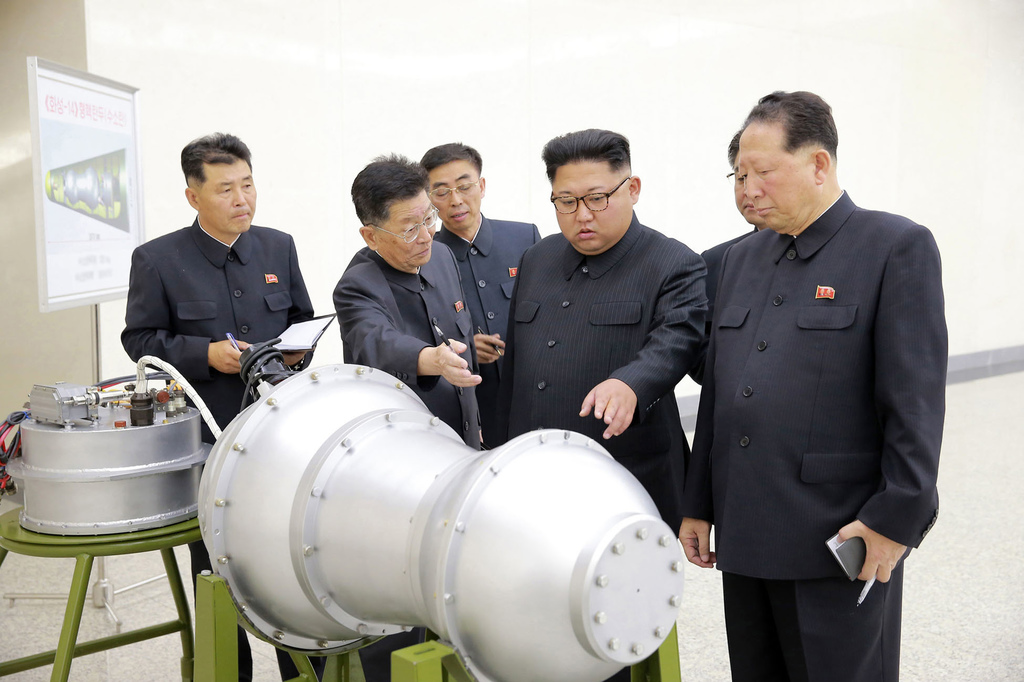 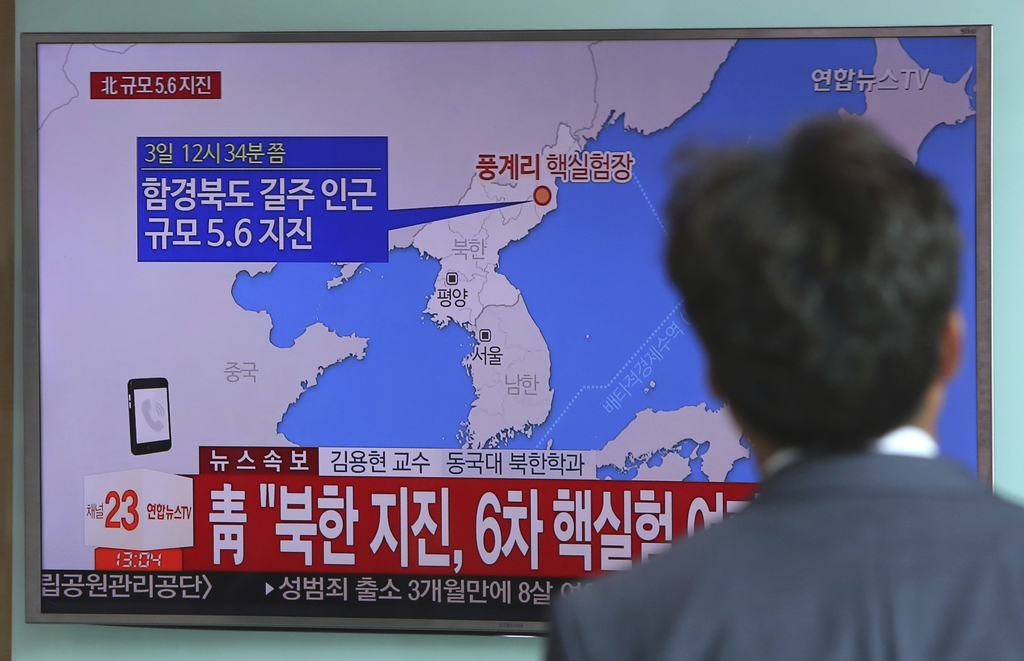 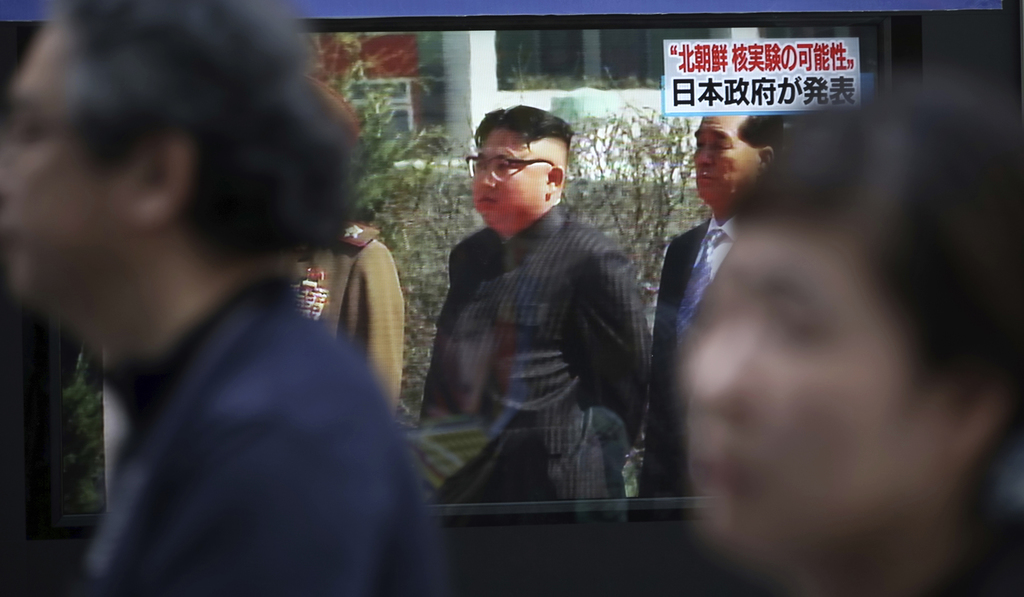 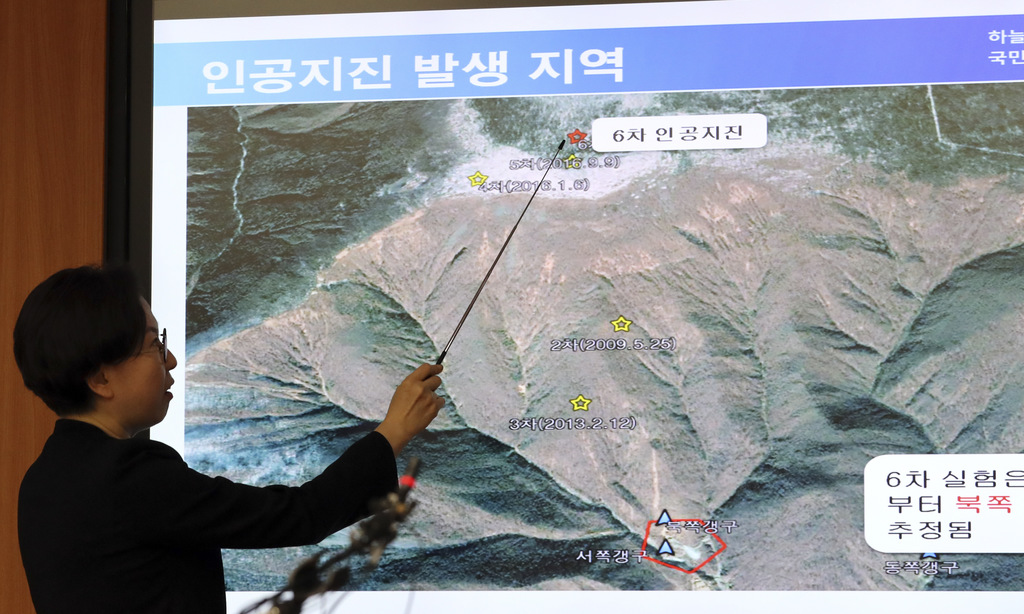 TOKYO (AP) — North Korea put on an extraordinary two-part show of its nuclear ambitions Sunday, releasing photos of leader Kim Jong Un next to what it described as a H-bomb for an ICBM, then actually detonating a device in its sixth and by far most powerful nuclear test to date.

The underground test, a major nose-thumb at Washington, Beijing and all of the North's neighbors, follows an intense few months that have seen Kim launching missiles at record clip and in ways that are much more provocative than usual.

It was almost certainly intended to get under the skin of one man in particular: U.S. President Donald Trump, whose first salvo back, in a tweet, was: "North Korea has conducted a major Nuclear Test. Their words and actions continue to be very hostile and dangerous to the United States."

Here's a closer look at what the North did Sunday, and some of the possible reasons why.

A front-page story in the ruling-party newspaper, Rodong Sinmun, carried photos of Kim watching a shiny, peanut-shaped device it said was a hydrogen bomb designed to be mounted into the North's new "Hwasong-14" intercontinental ballistic missile. The North's official news agency, KCNA, also released the photos, which were clearly intended to be seen by a global audience.

Whether the North can make a nuclear warhead small and light enough to put on top of a long-range missile has long been a matter of heated debate among foreign experts. This was clearly an attempt to address those doubts. The North in July had demonstrated for the first time that it has — or is very close to having — an operational ICBM, though experts still believe it could at best reach Chicago and will probably require another year or two to perfect.

The photos created a stir among missile and nuclear weapons experts on Twitter, with the general consensus being that the design appeared to look about right for a sophisticated thermonuclear warhead. The peanut shape is created by two rounded "stages" within the device that give it an extra boost and a far higher yield than simpler nuclear bombs.

The state media reports stressed that the bomb was made with domestic parts and workmanship, suggesting that more could be made without outside experts or imports.

Before North Korea watchers had a chance to digest that photo dump, the seismographs started recording a big tremor at about 12:30 p.m. North Korea time.

Ground motion is a great indicator of an underground nuclear test, and sometimes the only one. North Korea has proven itself adept at masking other telltale signs, such as the leakage of radioactive materials. The power of the blast, its location at the North's nuclear testing site and the shallow epicenter left little doubt.

North Korea has repeatedly stated that it will continue to pursue nuclear weapons and long-range missiles capable of reaching the U.S. because it sees that strategy as its only protection against what it believes is a hostile superpower bent on regime change or possibly outright invasion.

To that end, it must test its weapons to both perfect technologies and dispel doubts. Sunday's test went a long way toward doing that.

Although it doesn't prove a nuclear warhead can be fitted onto the Hwasong-14, thermonuclear devices can be lightweight and still produce tremendously high yields. The device that was detonated on Sunday is believed to have a much bigger yield than anything the North has ever demonstrated before — possibly 70 kilotons according to Japan's defense minister.

That's far more than the bombs that destroyed Hiroshima (15 kilotons) and Nagasaki (around 20).

Starting with the launches of two ICBMs in July that are believed to have the range to strike the U.S. mainland, North Korea has been far more aggressive in its military activities over the past few months than usual.

It's possible Kim Jong Un — feeling either threatened or emboldened by Trump — has decided to hurry to get that nuclear deterrent his country is after.

But tensions on the Korean Peninsula rise every year in the spring and late summer, when the U.S. and South Korea hold annual military exercises.

North Korea has stated it is, at least in part, responding to Washington's decision to hold the exercises, which ended last week. It has also protested a new round of sanctions recently approved by the U.N. and the repeated dispatch of B-1B bombers from the island of Guam to the skies of South Korea — a show of force from Washington to reassure allies in Seoul and Tokyo.

North Korea's state media reported that Kim said the launch of an intermediate range missile over Japan just a week ago was a "curtain-raiser" for more activity ahead.

But it will almost certainly raise the curtain on something else — a tougher response, either in sanctions, diplomatic isolation or a bolstered U.S. military presence — that Kim and his top lieutenants will have to take into consideration as well.