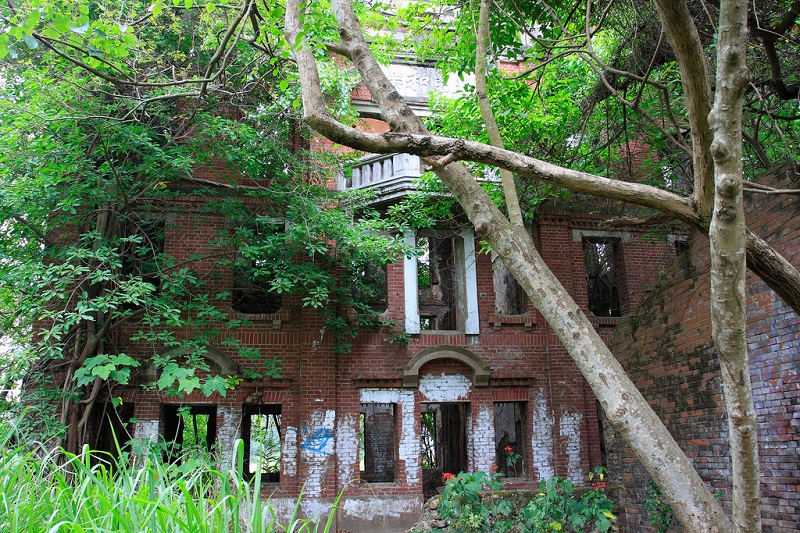 TAIPEI (Taiwan News)--During the 7th lunar month, also known as the ghost month, in Chinese culture, rumors of eerie and scary stories about encounters in and around spooky places spread. The following are a list and short descriptions of seven of the spookiest places in Taiwan.

Bei-Yi Highway, which is part of Provincial Highway No. 9, passes through mountainous regions and connects Taipei and Yilan County. The highway used to be most prone to fatal accidents in Taiwan because it’s narrow and curvy. Lots of ghost money (joss money) along the highway was a common sight in the past. The ghost money was scattered on the highway to appease the spirits. Recently, the highway becomes the most popular heavy motorcycle route in Taipei and frequent fatal accidents continue to mount, and so do ghastly rumors. The Dakeng Scenic Area, located in Taichung City, is the place where the footage of a spooky little girl dressed in red was captured on a camcorder in 1998. The video shows members of a family happily hiking on a trail in the area, but one of them at the front can be seen having buckteeth, who was said to have died not long after returning home. However, the more horrifying part of the video footage is the little girl, who nobody in the group knows is tagging along after everybody else. The footage was spread by TV and became the inspiration for the famous horror movie “The Tag-Along.” (The spooky video footage was broadcast by Taiwan EBC news) The deserted site of the Bitan Amusement Park is located on Hemei Mountain in the Bitan Scenic Area in Xindian, New Taipei City. The amusement park used to be a popular tourist destination, but it was shut down in mid 1980s due to declining business. It is said that a worker died during the operation of tearing down an old Ferris wheel, and after that rumors of ghosts haunting this place spread. Located in downtown Tainan City is the gruesome abandoned “Xinglin General Hospital,” which in the past was the largest hospital in the city. Any Tainan native will tell you a scary tale or two about the hospital that they heard. Rumors say that people often saw a long-haired woman inside the hospital, which has been abandoned for 20 years, gazing out of the window, and others say dreary sounds of crying were heard coming from the hospital. But according to daring people who had adventured into the hospital, the medial equipment and the stuff left behind by patients were still there and the atmosphere was very weird. The Minsyon haunted house in Chiayi County is probably one of the the most classic in Taiwan. It was the old residence of the Liu family, a big landlord in the Qing Dynasty. According to hearsay, the host of the house and a female servant fell in love, which was found out by the hostess. After that the hostess began to mistreat and abuse the servant, who couldn’t stand the treatment and committed suicide by throwing herself into a well. Some time after the incident, the servant’s spirit began to be spotted in the big residence. Rumor has it that some Japan soldiers once camped out in the house but one by one shot themselves to death without being attacked. All the dreadful talks painted a ghastly color for the house. The Wuri haunted house was selected by netizens in Taiwan as one of the most horrifying. According to local people, a female dancer fell in love with a wealthy businessman, but she grew very disappointed and felt cheated by the businessman emotionally. One day she dressed herself in red, went to the the main bedroom of the unfinished house, and killed herself by hanging. From that time on, stories about the sound of a woman weeping in the house after the sun goes down and the light in the main bedroom being turned on have circulated. The Keelung haunted house is deemed as the most expensive in Taiwan because it is located at an intersection in the busiest section of the city. The Baroque architecture of the house with a big old banyan tree growing at its roof is a ready-made haunted house for a horror movie. The local said the story of the house has been traced back to the 50’s when the owner of the house, a rich businessman surnamed Lin, opened a bar in his own house when American forces were based in Taiwan. A bar girl working in this bar was pregnant, the father, an American soldier, who not only refused to take her back to America but also taunted her. For taking revenge, the girl invited him to the bar for farewell in the night before he left Taiwan and set the bar on fire. The tragic arson took many people’s lives. After that, many people said they saw the bar girl with half-burned face in the house as well as green light and other gruesome stories.