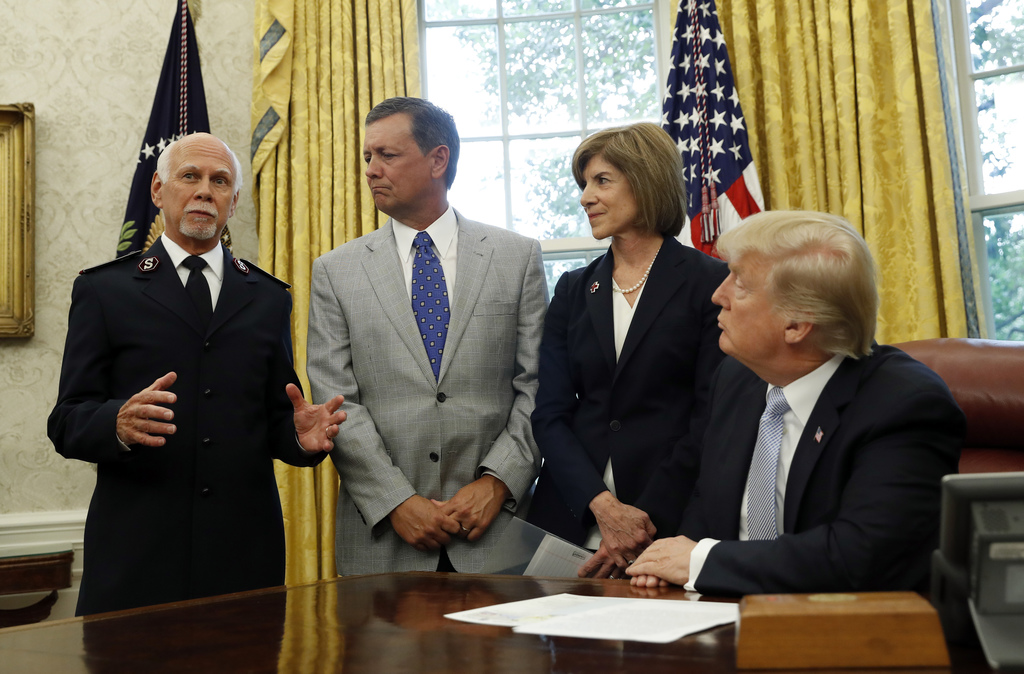 WASHINGTON (AP) — The White House is still trying to decide who will get President Donald Trump's pledged $1 million donation for Harvey storm relief efforts, one of the largest gifts ever given by a president but one that has evoked his checkered charitable past.

The president plans to make the donation, which is expected to come from his personal fortune, early next week, and it may be split among several groups doing relief work in storm-ravaged areas of Texas and Louisiana. White House press secretary Sarah Huckabee Sanders said Friday that the president hasn't finalized where the money will go, raising some concern that charitable groups may end up competing for the money.

For the second straight day, Sanders invited reporters to make recommendations for which groups should get the money.

"If you have suggestions, he is very open to hearing those," Sanders said.

The president met with three relief groups — the Red Cross, Southern Baptist Relief and Salvation Army — in the Oval Office on Friday and pledged the nation's support to those affected by Harvey.

"Families have given food and shelter to those in need. Houses of worship have organized efforts to clean up communities and repair damaged homes," Trump said during an earlier meeting with religious leaders. "People have never seen anything quite like this. Individuals of every background are striving for the same goal: to aid and comfort people facing devastating losses."

Trump traveled to Texas on Tuesday and is scheduled to return Saturday to meet with storm survivors and inspect some of the destruction.

There has been some concern that, if Trump opted to donate to only one group or just a few, there could be intense competition among relief agencies for the money and the publicity that comes with it.

"He should be looking to make an informed contribution, and it seems that he's doing so," said Cohen, noting that the president has stayed abreast of conditions on the ground and is planning to see it first-hand.

White House officials said the donation would come from the president's personal fortune and not his business, the Trump Organization, or his charitable foundation.

"You have to take him at his word," said Leslie Lenkowsky, a professor at Indiana University who focuses on philanthropy and who formerly headed the Corporation for National and Community Service. "If he wants to lead the way, that's one of the things that a president's supposed to do. ... He does like the image of himself as a compassionate person."

Trump's history of charitable donations features bursts of generosity frequently overshadowed by failed promises and questions about the source of the gifts.

The president has claimed to be worth $10 billion while experts have pegged his fortunate at far less. But Trump reportedly donates a far smaller percentage of his dollars than many of his fellow billionaires. The exact extent of Trump's charitable giving is not known since the president has broken with decades of tradition and not released his tax returns.

The Trump Foundation came under heavy scrutiny during the 2016 presidential campaign. It was revealed that Trump frequently did not follow through on his charitable promises. Records show that in the 15 years before his campaign, Trump made $8.5 million in pledges but paid out about $2.8 million, according to The Washington Post.

In January 2016, Trump held a high-profile fundraiser for veterans' causes, but it took him four months — and pressure from the media — to follow through on his pledge to donate $1 million of his own money to the cause.

Trump, one of the nation's wealthiest presidents, has also pledged to donate his annual $400,000 salary to charity. His first two gifts from his presidential earnings were to the National Park Service and the Education Department.

Other presidents, including Barack Obama, would customarily donate a percentage of their income — including money from outside sources like book sales — to charity every year.