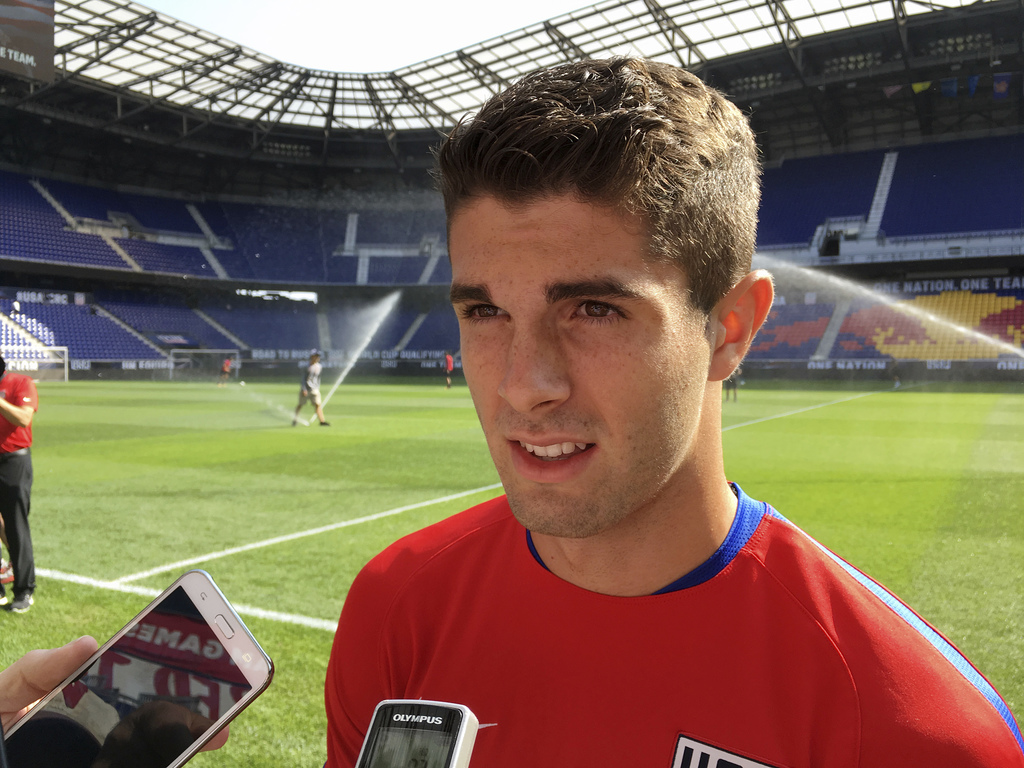 HARRISON, N.J. (AP) — As Christian Pulisic warmed up for training ahead of Friday's critical World Cup qualifier against Costa Rica, retired goalkeeper Kasey Keller marveled at the young American star who might wind up the country's best ever.

"I'm truly blown away with where he's at, where he can go," Keller said Thursday at Red Bull Arena. "I could see Christian being bought for $100 million by a Barcelona, a Real Madrid, a Manchester United, a Chelsea, a Bayern Munich. He has an opportunity to be that first kind of marquee U.S. national team player that's been bought for a ton of money and starred for one of the biggest teams in the world for a long time."

Even Pulisic acknowledges his ascent has been a whirlwind.

He left his Hershey, Pennsylvania, high school in February 2015 to join Borussia Dortmund's youth program. He made his first-team debut in January 2016 at age 17, and two months later was called up to the U.S. national team. At an age when most American soccer players still are establishing themselves in youth programs, he has seven goals in 16 international appearances, including five in World Cup qualifying.

"For me, everything happened a little bit too fast. Of course, the past year's been a roller coaster," Pulisic said. "Being able to play at a club level, at a high level, and then getting called into national team, it's amazing. But I'm just trying to stay as level grounded as I can, you know, finding the balance. I'm just honored that I'm here and so quickly I'm able to represent my club and country."

By April he was a cover boy for an American soccer gear catalog, status usually limited to greats like Lionel Messi or Cristiano Ronaldo.

"Of course, I hear about all this stuff. People talk about, you know, this kid. There's hype, whatever, but I just try to keep it out of my mind as much as I can because that doesn't really matter to me," Pulisic said. "I put enough pressure on myself. I don't need all this outside attention or whatever like that, so I just try to do the best I can for myself and the people around me."

Able to dribble past defenders with speed and cleverness rarely before displayed by an American, Pulisic was given the national team's No. 10 jersey — usually assigned to a top star — for the first time last September at 17 years, 349 days.

Used primarily as a flank midfielder at first by Dortmund coach Thomas Tuchel, Pulisic took on a more central role in the second half of last season when Marco Reus injured a knee. Pulisic had two goals in 12 appearances during his first senior team season, becoming the youngest foreigner to score in the Bundesliga, then added five in 43 games last year.

He scored against Bayern Munich in the German Super Cup to start the new season, then added a goal and assist in Dortmund's Bundesliga opener under new coach Peter Bosz, a 3-0 win at Wolfsburg.

"He handles everything in the right way," said U.S. coach Bruce Arena, who replaced Jurgen Klinsmann last November and has given Pulisic a more prominent role.

"I think he respects the senior players at his club, on the national team program. He just goes out and plays and enjoys himself and gets the job done. He's pretty impressive for a player his age."

After losing 2-1 at home to Mexico and 4-0 at Costa Rica under Klinsmann in the start of the final round of the North and Central American and Caribbean region, the U.S. has climbed the standings under Arena. The Americans won home games against Honduras and Trinidad and Tobago, and earned draws at Panama and Mexico.

There is a scenario that allows the U.S. to clinch its eighth straight World Cup berth on Tuesday at Honduras. But it is more likely the Americans will need points from their last two matches, at home versus Panama on Oct. 6 and at Trinidad four days later.

"It's been hard work to put ourselves in this position, to turn things around, and the foot can't come off the gas now," U.S. captain Michael Bradley said. "We've got to have this ruthless mentality that says in these last four games, when everything's on the line, we're going to use our good position and finish things off."

NOTES: The Americans are missing two of their top defenders because of injuries: center back John Brooks and right back DeAndre Yedlin. Arena said he did not pick Eintracht Frankfurt's Timmy Chandler because the oft-injured right back had not been with the team for any matches since he took over. "All the players that are on our roster for this competition have been with us this year, so I think it makes it easier for us to transition the team into these two games," Arena said. ... Six Americans enter the game with yellow cards and with another caution would be suspended for the next game: Bradley, Jozy Altidore, Paul Arriola, Alejandro Bedoya, Matt Besler and Geoff Cameron.