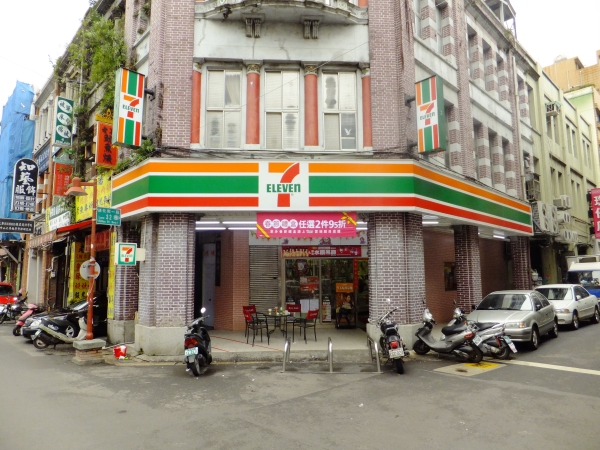 It is sometimes remarked that Taiwan possesses an excellent balance of influence from both Northeast and Southeast Asia, a geographic gem with a culture offering the best of both regions.

For example, Taiwan possesses the high culture of its Chinese heritage as well as a strong sense for propriety and efficiency imparted from the Japanese during the colonial period. On the other hand, the incredibly hospitable nature of Taiwanese society, along with an often laissez-faire attitude towards things like rules or regulations, reflects a character similar to the island nations of Southeast Asia.

So let us talk about one place where these two aspects of Taiwan really shine through: convenience stores. If you have ever had the pleasure of visiting the beautiful island of Taiwan, then you've seen them. They are almost everywhere, offering a modern part of life in Taiwan that delivers a bit of brilliance with every visit.

The skeptical among you are probably thinking one of two things at this point; either "There's nothing special, or even cultural about a 7-11," or perhaps "But wait, the modern convenience store is an import from the West." For that last one, yes, you are right. However, Taiwan has improved on the idea and placed it ever so neatly into its modern social apparatus.

And as for the former thought that there is nothing special about a 7-11, a Family Mart, a Hi-Life, or even an OK-Mart. Well, you're wrong. So what makes a Taiwanese convenience store any different from those of other countries?

For starters, convenience stores in Taiwan are not simply the "in and out" affairs you are accustomed to in most countries. People really don't mind spending time there, and perhaps more amazing, the proprietors and employees are genuinely accommodating in this regard. While not all convenience stores have the space to provide seating for their customers, many do, and with good lighting, air conditioning, and often 24 hour service, communities make good use of them.

The most general conception of a convenience store is just a place that sells the most basic items of necessity alongside snacks and beverages. But in Taiwan, they are so much more. The modern convenience store has become a kind of geographic lynch-pin for many communities in Taiwan.

Do you need a place to get away from the weather while making plans for the rest of the day? Go to Family Mart. Do you need a cafe to do some work, but don't want to spend 5 dollars on a cup of coffee? 7-11 has you covered with coffee for a third of the price, and they usually also have free wifi available in metro areas.

Perhaps you want to enjoy a few drinks with friends, but your budget is tight? That's right, convenience stores do not mind if you sit around with your friends buying each other rounds of beer. This one comes with a kind of caveat though, that the generally wholesome atmosphere of the store must not be disturbed.

Taiwan is a laid-back place, and one that has fostered a culture of responsible alcohol consumption. So as long as you're not disturbing others or making a mess, then convenience stores in Taiwan are absolutely OK with serving as a substitute watering hole for those who would rather not shell out for expensive drinks at the bar.

But wait, there's more! Did you get your gas bill, and want to get that paid while it's still on your mind? Well, you can pay that at the Family Mart, at the same time as you pay for a soda and candy bar. Or maybe you want to get some tickets for a concert or an art exhibition coming up? There's a kiosk at 7-11, where you can pick those up and pay at the counter. Observing life in Taiwan, it seems that socially, the country has developed around these chains of convenience stores, in the same manner that the United States developed around the transport hubs of modern gas stations. The crucial difference between the two societies is one of scale, and that also translates into a difference in character.

In Taiwan, a full tank of gas in a decent vehicle should take you all the way from one end of the island to the other. And with most people using scooters to travel short distances, along with well-developed public transportation throughout Taiwan, the presence of fueling stations, while still necessary, is not as central to transportation or the network of exchange that has developed in Taiwan.

Instead, the modern convenience store has adopted several important functions as a social venue, in addition to integrating and almost completely overtaking the market role of the traditional corner-store of Taiwan's past. While the decline of locally owned corner-stores is regrettable, all has not been lost.

Many traditional corner-store markets are either adapting to the modern competition, or have built a such a strong reputation with local communities that they will continue to persevere regardless. And for those that have stuck around, there is hope, as nostalgia for vintage and early modern style has become a market asset in its own right. When considering Taiwan as an open and democratic society, one that offers the genuine potential for class mobility, personal enterprise and exchange across the social spectrum, perhaps we might look at the the modern convenience store from a new perspective.

Data from the Ministry of Economic Affairs in 2016 states that the density of convenience stores in Taiwan is the highest in the world. Without even considering the monetary implications of that data, just imagine what percentage of the Taiwanese population has worked a part-time job in a 7-11, a Hi-Life, or a Family Mart.

If we consider the role these establishments serve for their local communities, then we can just as easily recognize how they might serve as geographic and economic guideposts for aspiring business owners or investors. And lastly, with the established brands as they are, the chains offer recognizable, reliable, and safe environments for individuals from every class or demographic throughout society.

Whether in Taipei to the north, or Pingtung to the south, you can see people across the economic spectrum peacefully sharing the space inside a modern convenience store. Students working together on their homework, seated beside a salary man enjoying a cheap meal of microwaved food or instant noodles.

A local homeless person may make use of the air conditioning or the dry space during rough weather, and the very same table might be used hours later by an insurance agent selling plans to a middle class family.

You might see groups of tourists smiling over drinks and cheap meals on the go, right next to architects analyzing blueprints for new construction projects. Rich businessmen in suits discussing deals might be casually seated across form a young mother treating her children to an ice cream snack. All the while helpful and mild-mannered employees will be greeting visitors with smiles as they come and go. While it may seem a bit silly to declare a 7-11 or a Family Mart as some symbol of an open and inclusive capitalist society, the modern convenience store in Taiwan does seem to reflect something like that. It is hard to deny the accessibility, convenience, and hospitality, offered in true Taiwanese style, which these establishments provide.

Convenience store chains and owners could probably learn a lot from studying stores in Taiwan. But I'd still have my doubts they could get the formula just right.