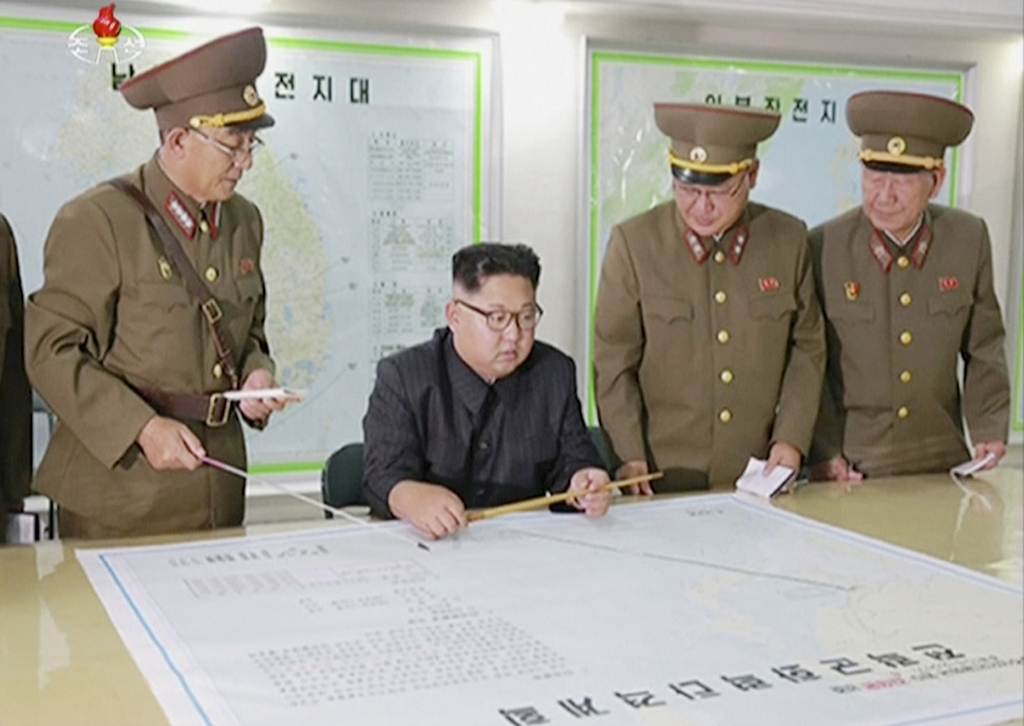 TOKYO (AP) — Conventional wisdom says that if North Korea were ever to use its nuclear weapons, it would be an act of suicide. But brace yourself for what deterrence experts call the "theory of victory."

To many who have studied how nuclear strategies actually work, it's conceivable North Korea could escalate to a nuclear war and still survive. Tuesday's missile test suggests once again it may be racing to prepare itself to do just that — but only if forced into a corner.

Every missile North Korean leader Kim Jong Un launches comes at a high cost. North Korea doesn't have an unlimited supply, and they aren't easy or cheap to build.

So when Kim orders his strategic forces to launch, it's safe to assume it's a move calculated to achieve maximum political, technical and training value. Tuesday's launch of a ballistic missile over Japan and into the open Pacific Ocean, once again blowing past warnings from the United States and its allies, is a prime example.

There is a solid strategy hidden in each launch. From Kim's perspective, here's what it looks like.

HOW THE NORTH COULD SURVIVE

North Korea has never suggested it would use its nuclear weapons to attack the United States or its allies completely out of the blue.

But, like Washington, it has stated quite explicitly that if it is either attacked or has reason to believe an attack is imminent, it has the right to launch a retaliatory or even a pre-emptive first strike.

The trigger for North Korea could be unusual troop movements in South Korea, suspicious activity at U.S. bases in Japan or — as the North has recently warned — flights near its airspace by U.S. Air Force B-1B bombers out of their home base on the island of Guam.

If Kim deemed any of those an imminent attack, one North Korean strategy would be to immediately target U.S. bases in Japan. A more violent move would be to attack a Japanese city, such as Tokyo, though that would probably be unnecessary since at this point the objective would be to weaken the U.S. military's command and control. Going nuclear would send the strongest message, but chemical weapons would be an alternative.

North Korea's ability to next hit the U.S. mainland with nuclear-tipped missiles is the key to how it would survive in this scenario. And that's why Kim has been rushing to perfect and show them off to the world.

"The whole reason they developed the ICBM was to deter American nuclear retaliation because if you can hold an American city or cities at risk the American calculation always changes," said Vipin Narang, an associate professor of political science at the Massachusetts Institute of Technology and a nuclear strategy specialist.

"Are we really willing to risk Los Angeles or Chicago in retaliation for an attack on a U.S. military base in the region?" he asks. "Probably not."

That, right there, is Kim's big wager.

If "no" actually is the answer, then North Korea has a chance — though slim and risky — of staving off a full-scale conventional attack by the United States to survive another day.

Kim isn't paranoid. He has good reason to fear an attack by the United States.

It's highly unlikely Washington would unilaterally start a war. But if it did, North Korea would face a far stronger and better equipped enemy able to — literally — bring the fight right to Kim's front door. A successful U.S. first strike could within hours or days take out North Korea's leadership, or at least seriously disrupt its chain of command, and destroy a good portion of the country's fighting power.

So North Korea has a very strong incentive to escalate fast, before all is lost.

Under Kim Il Sung and Kim Jong Il — Kim's grandfather and father — North Korea relied on conventional artillery just north of the Demilitarized Zone to keep Washington at bay, figuring the U.S. wouldn't make any moves that might risk an attack on South Korea's capital, Seoul, and the tremendous casualties and destruction that would bring.

Kim, fearing "decapitation strikes," has brought missiles and nukes into the mix for an added layer of protection.

His strategy is to neutralize Washington's military option by holding both Seoul and an American city hostage while building up his own ability to withstand a first strike or a massive wave of retaliation. To do that, North Korea is developing an array of missiles that can be launched by land or from submarines and easily hidden and transported to remote, hard-to-detect sites.

Reasonably enough, countries with big arsenals are generally considered less likely to feel the need to use them or lose them.

North Korea is believed to have an arsenal of perhaps several dozen nuclear weapons, growing by maybe a dozen or so each year. That's a lot, but some analysts believe it may take a few hundred to cure Kim of the itchy trigger finger syndrome.

In deterrence circles, ambiguity is considered a must. But confusion can be deadly.

In any confrontation, it's best that an opponent knows better than to cross the line — but not to know exactly where that line is. That fosters caution. Confusion, on the other hand, creates the incentive to make a move either out of frightened self-defense or confident opportunism.

That's what North Korea appears to be doing now, though it's not clear whether the motive is fear or arrogance.

Over the past several weeks, U.S. President Donald Trump has promised fire, fury and power like the world has never seen should North Korea issue even a vocal threat — which it did almost immediately, with no major consequences. Trump's Cabinet members walked that back, but in the process set or seemed to erase red lines of their own.

Some have suggested this is a deliberate "madman strategy."

Inspired by the writings of Machiavelli, President Richard Nixon gave this ploy a go against Vietnam in the late 1960s. His idea was to make the Vietnamese and their Communist allies think that Nixon would do anything, including use his nuclear weapons, to end the war.

But if Trump is doing the same, he isn't doing it very well, Narang said.

While Kim's government speaks with one voice and maintains consistency, which is what gives the madman approach its credibility, it's "really hard for Trump to make these crazy statements and not have them walked back by someone in his administration."

"At some point," Narang said, "the blurriness goes away and we just look incoherent."