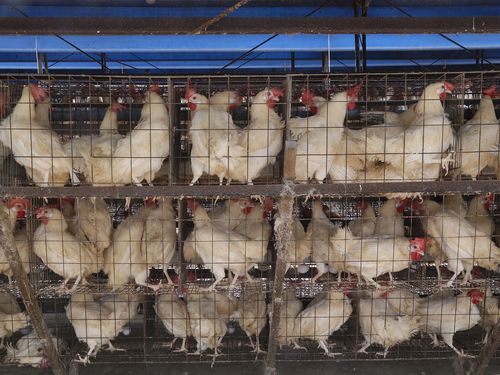 After days of inspections, eggs from 44 farms in Taiwan have been found to contain excessive levels of the insecticide fipronil, the Council of Agriculture (COA) said Friday.

COA deputy chief Huang Jin-cheng (黃金城) said the council has examined all of the egg samples collected from 1,451 farms around the country, and samples from 44 farms had concentrations of the toxic insecticide exceeding 5 parts-per-billion (ppb), or 0.005 mg/kg, a maximum residue limit set by the European Union.

Based on the findings, the COA has barred all of the eggs on those 44 farms in Changhua, Nantou, Chiayi and Pingtung counties and Kaohsiung, Taichung and Tainan cities from leaving the premises, Huang said.

As of noon of Friday, a total of 30,814 kilograms of eggs, or about 513,566 eggs, with excessive fipronil had been barred from leaving their farms, Huang said.

The COA launched an inspection of chicken farms around Taiwan from Aug. 20 as the fipronil scare hit the local market by collecting and examining samples.

The insecticide has contaminated eggs in Taiwan after similar incidents were seen in Europe and South Korea. The use of fipronil in producing food for human consumption in Europe is illegal.

The World Health Organization considers fipronil to be "moderately toxic" to humans. Long-term exposure to Fipronil can cause damage to kidneys, liver and thyroid gland. It can also cause "nausea, vomiting, abdominal pain, dizziness, and epileptic seizures."

The United States Environmental Protection Agency has classified fipronil as a possible human carcinogen based on an increase in thyroid follicular cell tumors in rats.