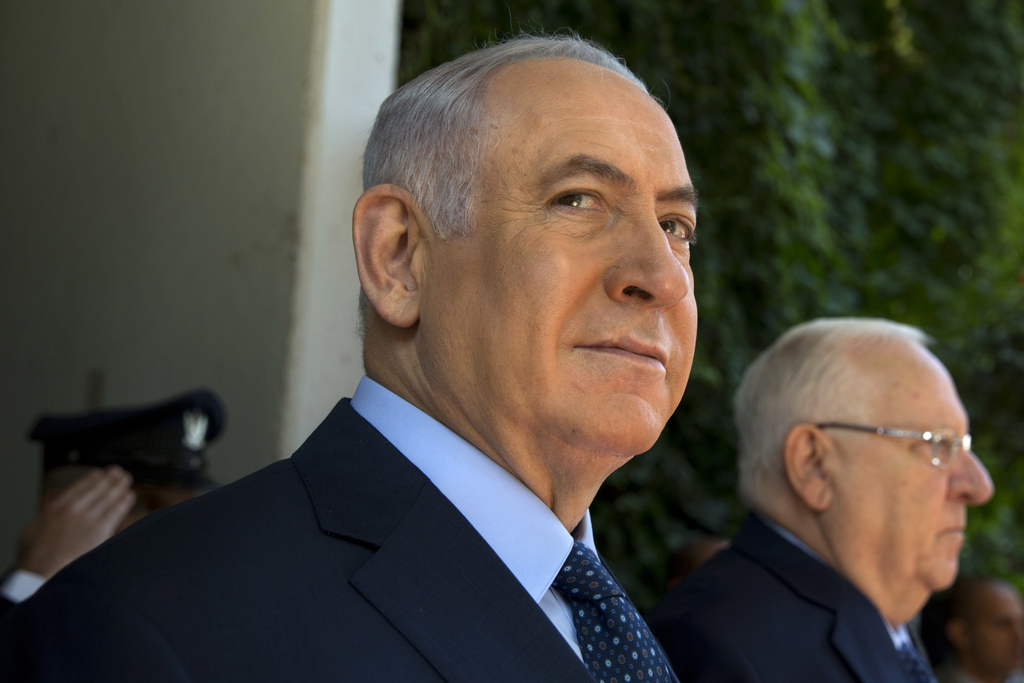 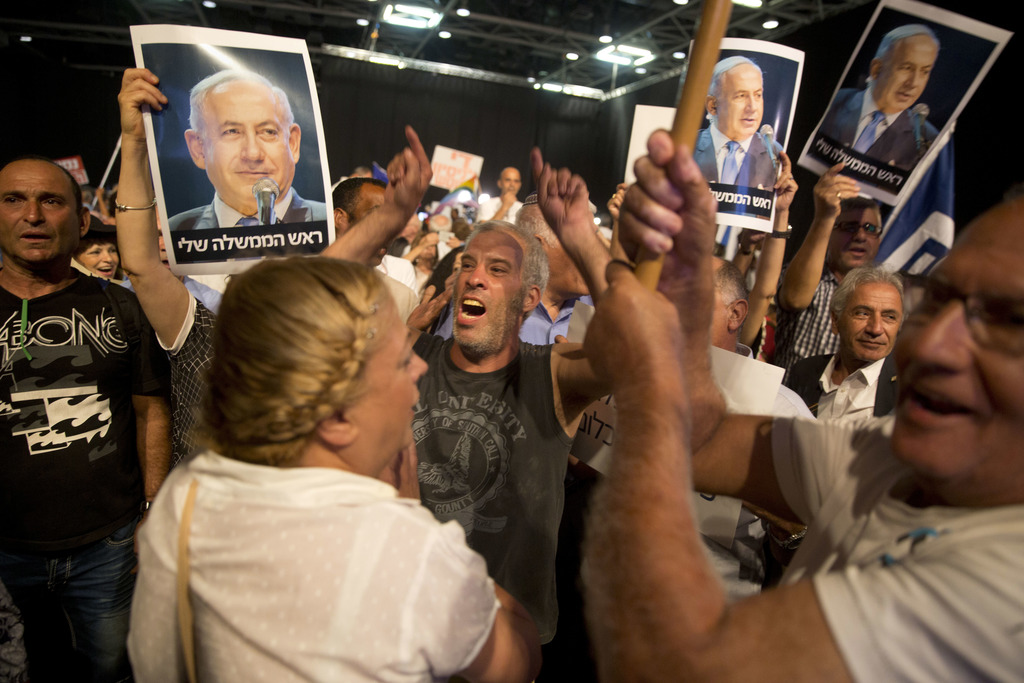 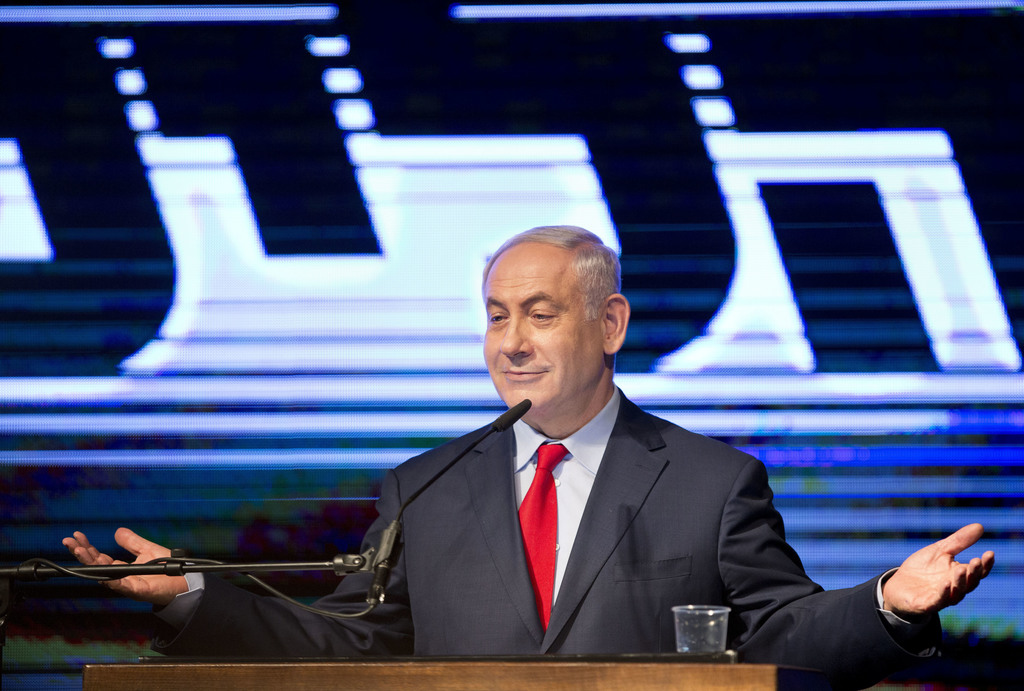 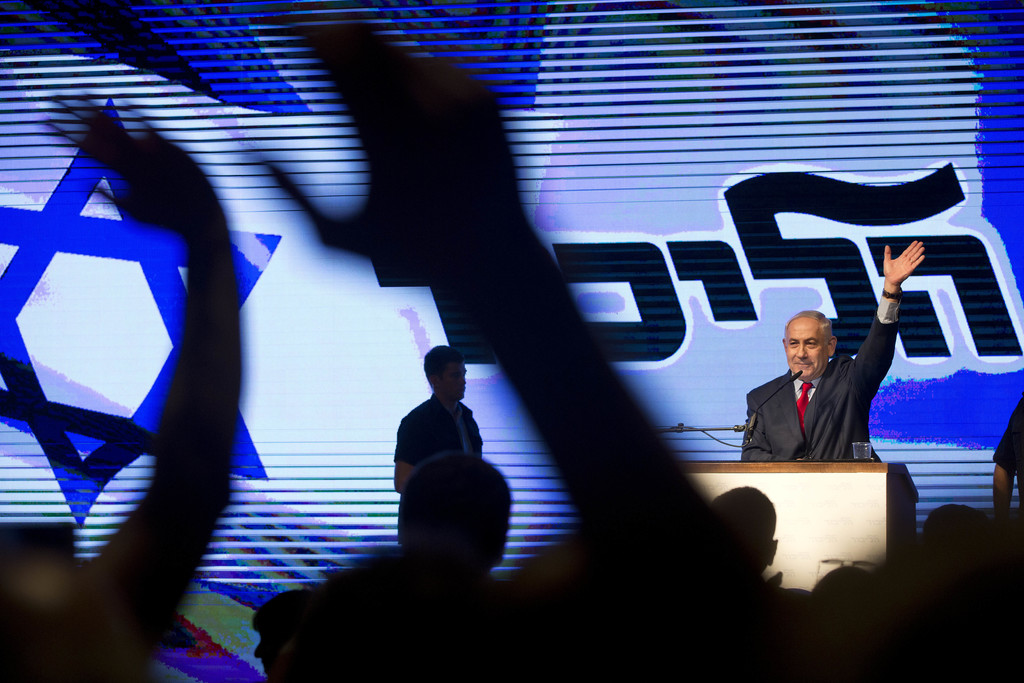 JERUSALEM (AP) — Directly addressing his nationalist base, a beleaguered leader accuses the news media of obsessively promoting a liberal agenda, conducting a "witch hunt against me and my family," and trying to overturn unpalatable electoral outcomes through sinister legal machinations.

This may sound like President Donald Trump. But this time it is Israel's Benjamin Netanyahu.

Netanyahu has always had a thorny relationship with Israel's prominent media outlets, where top writers, broadcasters and editors are generally more open to peace-seeking concessions to the Palestinians than the prime minister's nationalist Likud Party is. But his comments at a Likud Party rally on Wednesday evening — days after police revealed he is a suspect in several corruption cases — were an escalation that could have been lifted directly from Trump's playbook.

With hundreds of adoring supporters cheering wildly, Netanyahu launched into a tirade, accusing the media and political opposition of conspiring to topple him when he cannot be defeated at the ballot box. He carefully avoided any mention of the police and prosecutors who are conducting the actual investigation.

"The thought police in the media work full-time to set the agenda, and woe to anyone who veers away from it," said Netanyahu. "We know that the left and the media — and we know that it's the same thing — is on an obsessive witch hunt against me and my family with the goal of achieving a coup against the government."

The crowd chanted "Down with the Media," and one member held a large placard with a vulgar English expression against the media in front of the TV cameras. A reporter from the Times of Israel news site said Netanyahu supporters hurled insults and epithets at him, while a Channel 10 TV reporter was surrounded by a group of people who taunted him.

The tactic of attacking the media to deflect attention from political and legal trouble also seems part of an emerging zeitgeist in authoritarian-leaning countries these days.

In Vladimir Putin's Russia, independent media have been taken over by Kremlin-friendly figures and muckraking reporters have faced dismissals and even death. In Recep Teyep Erdogan's Turkey, scores of journalists are in jail, and in Viktor Orban's Hungary, the independent media is regularly vilified.

But the most striking parallel, of course, is with Trump, who has constantly attacked the media, especially after he won the Republican nomination about a year ago and many American media outlets began in earnest to fact-check his statements and frequently conclude he has a penchant for uttering provable falsehoods.

The New York Times now keeps a running tally of "Trump's Lies," and Politifact, a fact-checking project operated by the Tampa Bay Times, has classified 69 percent of Trump's statements as either 'Mostly false," ''false," or "pants on fire."

Trump, in turn, has cast journalists in general as his opposition, taken to broad statements accusing the mainstream media of peddling "fake news," called reporters "dishonest" and repeatedly accused journalists of "making up" stories.

In one infamous tweet, on Feb. 17, he wrote: "The FAKE NEWS media (failing @nytimes, @NBCnews, @ABC, @CBS, @CNN) is not my enemy, it is the enemy of the American People!"

His White House has engaged in an extraordinarily combative relationship with the media, restricted access to certain briefings and, for a while, blocked video from the daily press briefings, which traditionally had been broadcast live.

Netanyahu has employed some similar tactics. He rarely gives interviews or holds press conferences, preferring instead staged photo opportunities, handout videos or statements delivered on Facebook and WhatsApp. His government is pushing to close the Arab satellite channel Al-Jazeera, accusing it of incitement. And like Trump, Netanyahu has feuded with several prominent TV journalists over their coverage. When Trump visited Israel in May, Netanyahu and his wife Sara commiserated with Trump and his wife Melania about the perceived unfairness of the media.

The situation is not clear cut. Just as Trump has the support of some right-leaning newspapers, and conservative radio and TV outlets, there are equivalents in Israel, including newspapers and websites allied with the religious and nationalist camps that support Likud. One newspaper, Israel Hayom, was founded by Netanyahu's billionaire supporter Sheldon Adelson and often serves as a virtual mouthpiece for the prime minister.

But when Netanyahu attacks the media, he is referring to Israel's venerable established publications and the main private broadcast channels.

The main boogeyman for his supporters is probably the liberal Haaretz newspaper, which is generally critical of Netanyahu. Its editorial line staunchly backs a liberal world order, and it supports far-reaching efforts to reach a deal establishing a Palestinian state and ending Israel's occupation of the West Bank.

Part of the equation may relate to societal divisions. As in other countries, Israeli journalists disproportionately hail from parts of society — more secular, more educated, more urban and attuned to other cultures — than the base that supports insular policies and autocratic leaders, which can lean toward rural, uneducated and religious.

Netanyahu's base, for example, is heavily populated with Israel's less-privileged: Jews of Middle Eastern descent living in poorer provincial towns alienated from the European-descended "elites" who remain predominant in academia, the legal system, the security establishment and the media.

Netanyahu's version of "draining the swamp" — one of Trump's campaign touchstones — is "changing the elites."

Netanyahu's own background — the secular, European-descended, American-educated millionaire son of a professor — seems to bother his base no more than Trump's wealth and Ivy League background disturbs his voters in rural America and the rust belt.

It has all added up to an effective "us versus them" approach that has repeatedly worked for Netanyahu throughout his three-decade political career.

While all Israeli leaders have had difficult relationships with the media, Netanyahu has taken things to a new level, said Eytan Gilboa, a professor of communications and politics at Israel's Bar Ilan University.

He called Netanyahu's war on the media a "smart tactic." He said both Trump and Netanyahu realize the public's generally negative image of the media makes it an easy target.

"These tactics work very well with the base, but they also spill over to the general public," he said. "They both understand they can discredit the media and the result is further mistrust in the media."

Lost in the debate seems to be that the media had nothing to do with the investigations into possible bribery, fraud and penchant for expensive gifts by the prime minister. The scandals were compounded last week with the announcement that a longtime Netanyahu aid, Ari Harow, had agreed to testify against his former boss.

Gilboa said Netanyahu knows it would be crossing a line to go after police or prosecutors. Instead, he seems to be hoping that the public attacks on the media will somehow pressure prosecutors to back down.

"The left has no connection to the criminal investigations that are gaining momentum against Benjamin Netanyahu. The media is also playing third fiddle in this story. The people running the investigations are public officials whom Netanyahu himself appointed," wrote columnist Ben Caspit in the Maariv daily.

"The thing that is toppling Netanyahu is his behavior throughout the years," he added.