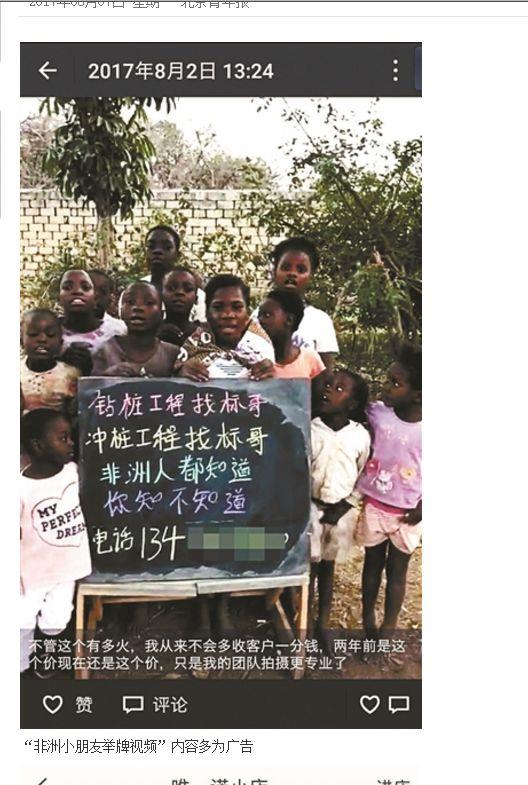 In the videos, the kids appear conveying messages in Mandarin like birthday greetings, marriage proposals and expressing love to companies' advertisements.

People have shown concern about the words the kids are asked to say on camera. In some videos, they innocently repeat swear words in Chinese or advertise X-rated live streams.

"Each child is paid less than 10 yuan ($1.49) for appearing in one video, since there are a lot of children there," said a service provider identifying himself as "African kids holding banners" on Kuaishou, a Chinese live streaming mobile application.

"The service fee mostly goes to the Chinese merchant running the service out of Africa, who can make at least 170,000 yuan a day," the seller added.

The clips have created interest with some people wanting to purchase their own customized videos, but others disagree with the approach since they consider some of the messages the children are asked to say as being inappropriate.

The videos and photos can be ordered on Alibaba's Taobao online store, China's largest e-commerce store.

"Every time a client asks me if I can film African children, I say I can’t because it's illegal," Rui Xiao, owner of a Taobao store that provides similar services with kids from Brazil and Italy, told Sixth Tone.

The platform has yet to be investigated whether such videos violate advertising laws. If the videos are found to contain illegal messages, they might be removed from the website, a Taobao staff member said.