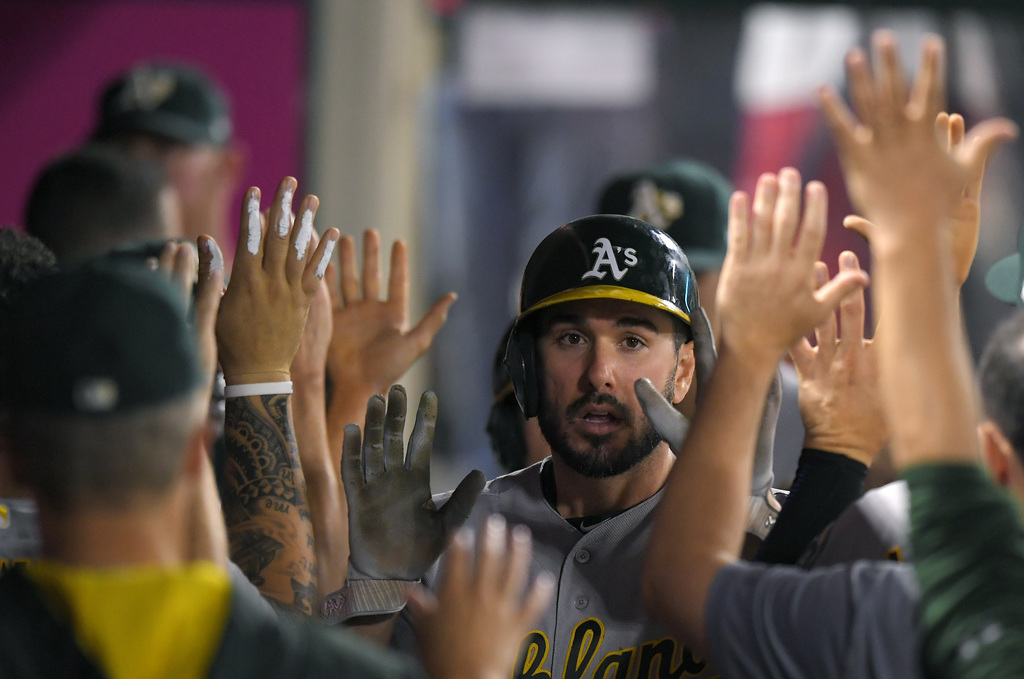 Oakland outfielder Matt Joyce received a two-game suspension without pay Saturday for directing a gay slur toward a fan in Anaheim and he will take part in a public outreach initiative with PFLAG, a family and ally organization supporting the LGBTQ community.

Major League Baseball made the announcement, saying Joyce's penalty was set to begin Saturday, when he also apologized through the team. Joyce said he is "beyond sorry," and the Athletics also made a statement insisting his language was unacceptable and wouldn't be tolerated.

"First and foremost I'd like to start by apologizing to everyone, especially the fans, the Oakland A's, the Bay Area — they've been awesome to me — MLB, and obviously, the LGBTQ community, whom I have a lot of respect for," Joyce said before Saturday's game. "I'm deeply ashamed and embarrassed at my actions and the language that I did use. It's very uncharacteristic of me."

The exchange occurred in the eighth inning of Los Angeles' 8-6 win after Angels first baseman C.J. Cron made a diving stop of Joyce's hard-hit grounder.

As Joyce returned to the dugout, he uttered several profanities at the fan, called him a gay slur and challenged him to fight, according to Associated Press photographer Mark J. Terrill, who overheard the exchange. Terrill said he didn't hear the first part of the exchange.

Joyce acknowledged Saturday that at one point he did invite the fan to "meet me outside."

"I let the emotions and frustrations really get the better of me there. I obviously said some words that should never be said. There's no excuse, there's no good excuse for that kind of language to be said and ever used," Joyce said.

"I really hope the people out there can find it in their heart to forgive me and not to be too quick to judge me on one incident. It's very unfortunate. It's one of those things I'm obviously going to regret. I already do. It's a tough lesson to be learned. I can't apologize enough."

Around baseball, any discriminatory behavior is being taken extremely seriously — and MLB has been firm about its stance.

The Boston Red Sox in May permanently banned a male fan they said used a racial slur, a separate confrontation from insults directed at Baltimore Orioles outfielder Adam Jones one night before. In June, the New York Mets fired their recognizable "Mr. Met" mascot — with the oversized costumed head with baseball seams — for flipping off a fan.