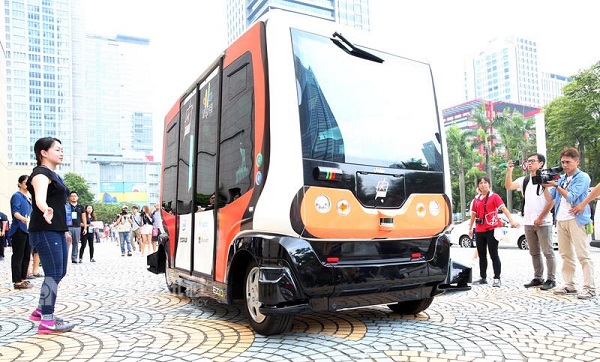 Early this morning, Taipei City Deputy Mayor Lin Chin-rong led the city government team to announce the success of the tests. The next stage will be to have daytime tests in Xinyi Road.

Taipei City Government and the French company 7Starlake cooperated to bring the first EZ10 Self-Driving Shuttle Bus to Taiwan. From August 1 to August 5, from 1 am to 4 am, the EZ10 was tested in the Fuxing South Road to Dunhua South Road sections of the Xinyi Road bus lane for a period of 5 days. The closed road tests were successfully concluded today.

Taipei City Deputy Mayor Lin Chin-rong (林欽榮) announced the success. Media were allowed to try out the EZ10 Self-Driving Shuttle Bus for themselves. From the Fuxing South Road to Dunhua South Road sections of the Xinyi Road, the EZ10 drove at a stately 10 km per hour speed.

Lin said that Taipei City will continue to support self-driving vehicles, whether through breakthroughs in laws and regulations, or by the next step of the National Communications Commission (NCC) application for V2V anti-collision system and V2I infrastructure system testing.

Taipei City Government Department of Information Technology Chief Secretary Chen Hui-min (陳慧敏) said that although the test results were smooth, there were still some wrinkles to be ironed out. The Taipei City Government Department of Land Administration’s GPS (Global Positioning System) uses a US standard, and the EZ10 Self-Driving Shuttle Bus system uses a European standard, so part of the follow-up will be to adjust the shuttle’s system.

Chen also said that the test time was too short, which impacts the construction of the shuttle’s map memory. The 7Starlake company hopes that it can be tested on different sections of roads and at different times and this will be discussed.

Chen said that the Self-Driving Shuttle Bus currently photographically detects traffic lights and hopes that in the future the shuttle bus and traffic lights wireless systems will combine for its navigation.

Taipei City Government hopes that the second stage of tests will be along the whole of Xinyi Road, and not only at night, but also in the day. Thus there would be a mix of self-driving and normal vehicles. The Nangang Science Park, Nangang Station, and Academia Sinica, are likely to be the next test sites.

Taipei City Government and 7Starlake are not yet sure if they will open the vehicles at these test sites for the general public to ride, as they need to consult with central government first.

On the shuttle bus there are six optical radars (LiDAR), providing distance assessment and collision avoidance. The test speed is 20 km or less, and the bus automatically stops if it encounters an obstacle. The car has 6 seats, with standing room for another 6, making a total of 12.

The Taipei City Government Department of Land Administration’s has set up a satellite positioning base station, providing a 24 hour signal for the EZ10 Self-Driving Shuttle Bus. 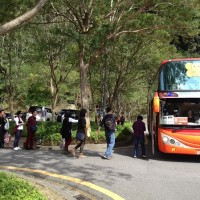