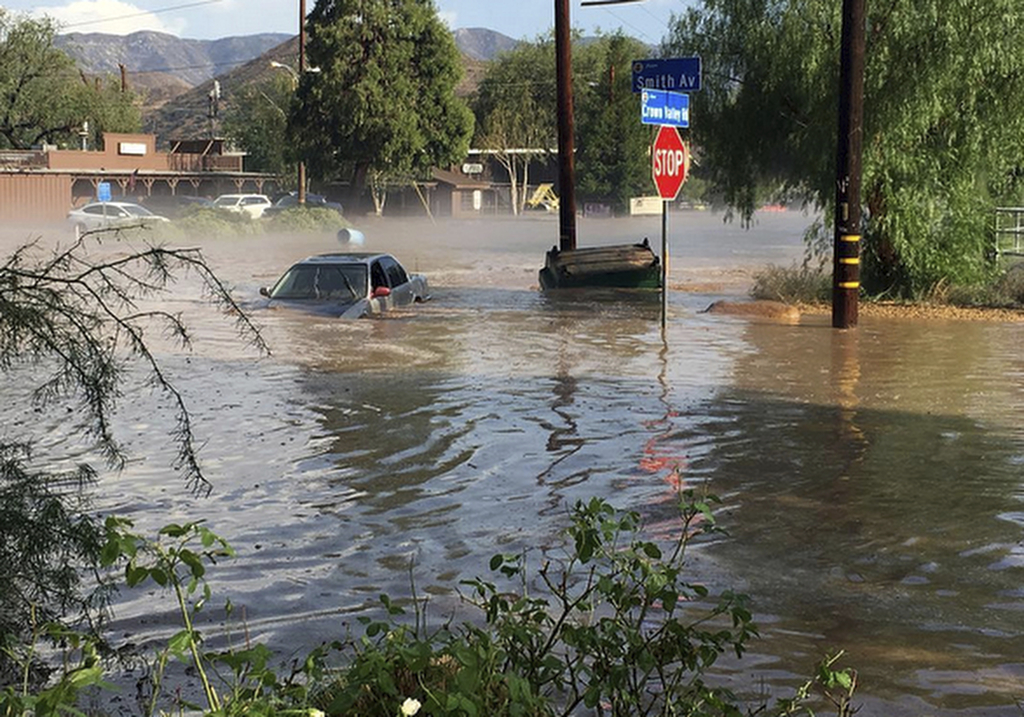 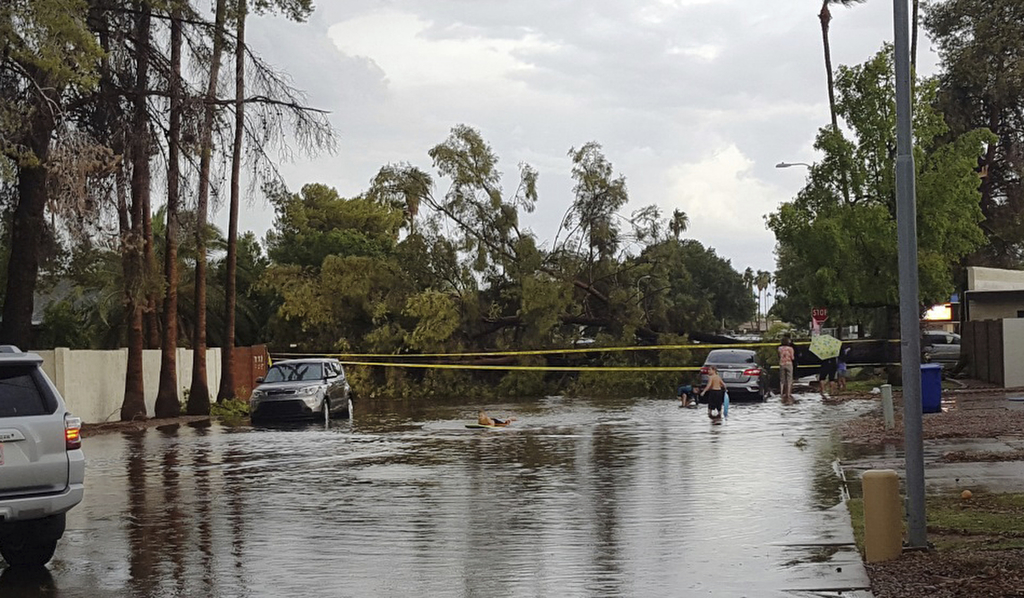 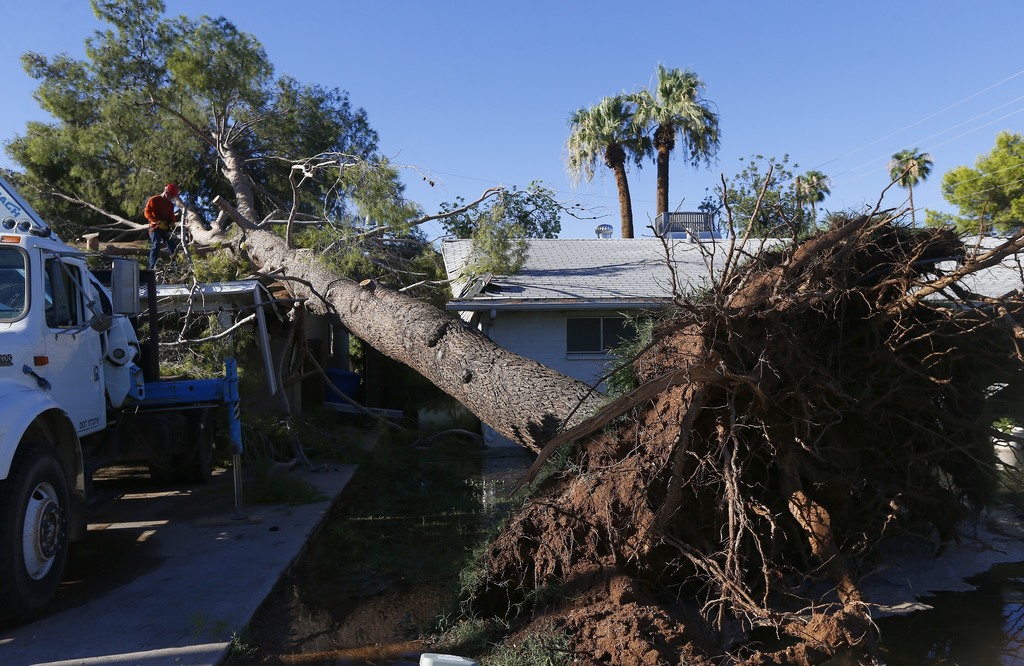 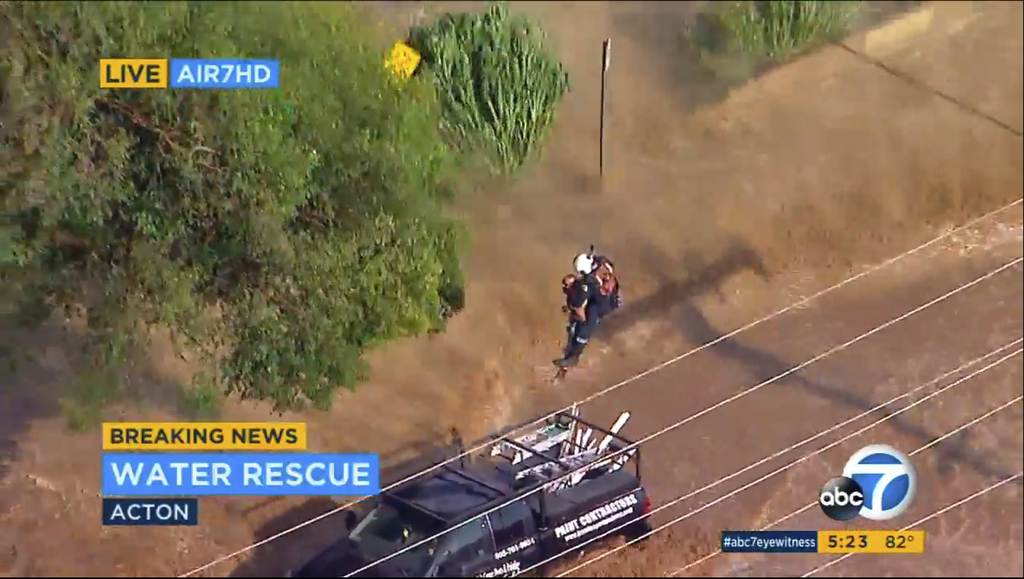 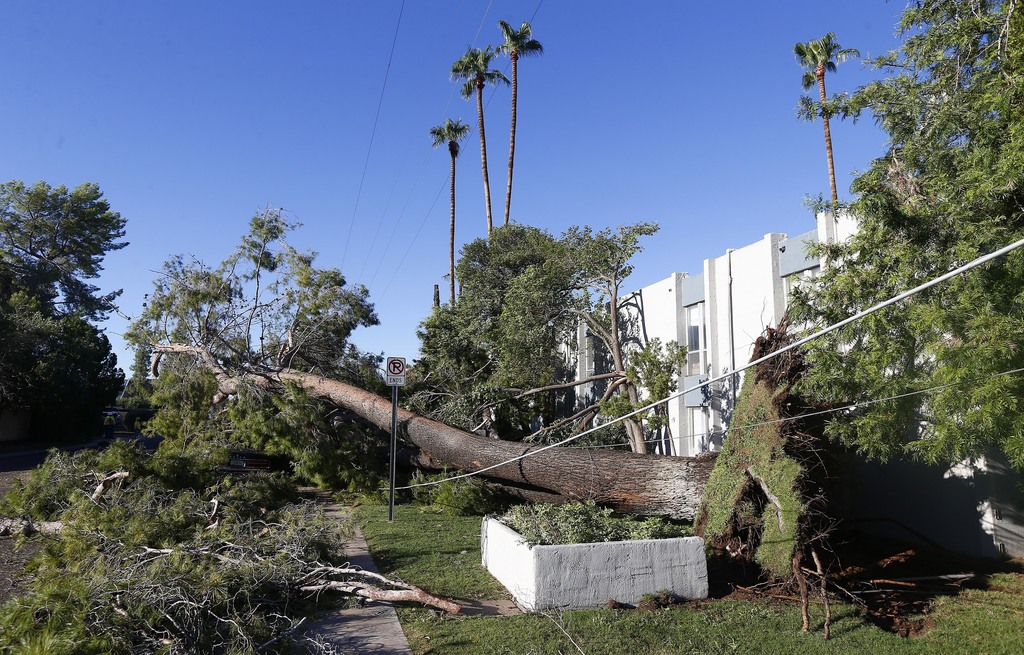 PHOENIX (AP) — Desert communities in Arizona and California were cleaning up Friday after summer storms unleashed muddy torrents into roadways and toppled huge trees into homes and vehicles.

A man in Los Angeles County was hoisted to safety by a helicopter when his pickup truck was surrounded by a river of muddy water.

Jesse Thomas of All About Trees said Friday the phone at his Phoenix tree-removal service was ringing non-stop. He spoke as his crew dealt with an 80-foot tall (24-meter), 20-ton Aleppo pine that crashed into a house from a neighboring property.

"It's been a few years since we have seen a tree this big come down," Thomas said.

The summer storms in the U.S. Southwest are known as monsoons, a term many associate with the Indian subcontinent and the Bay of Bengal.

A monsoon is simply a reversal of winds, National Weather Service forecaster Travis Wilson said. In the American Southwest, that means a switch of the region's wintertime westerly winds for the summertime's southerly and southeasterly flow bringing in moisture from Mexico's Gulf of California.

"With all that heat in the summer, and the clear skies, the moisture gets lifted up into the atmosphere and then we get thunderstorms and a lot of rain," said Wilson. "A lot of wind, too."

In the Phoenix area, the storms flooded streets, delayed flights and temporarily knocked out power to thousands of people. Dozens of utility company workers on Friday were replacing broken power poles and repairing downed lines.

The rainfall average for Phoenix is about 1 inch (2.54 cm) for July and August combined, Wilson said.

A tornado formed briefly during the storms in Phoenix but apparently didn't cause any damage other than kicking up dust, the National Weather Service said.

The Phoenix Zoo was closed Friday as crews cleaned up uprooted trees, damaged structures and flooded trails. All the animals were safe and accounted for and no animal habitats were harmed, Zoo spokeswoman Linda Hardwick said.

Fourteen people in that area were rescued by fire crews, including the man who was trapped in a truck, the Los Angeles County Fire Department said.

The Metrolink commuter train reported cancellations and delays during the Friday morning rush hour. One of its trains on a run between Los Angeles and the high desert Antelope Valley was forced to stop Thursday as rushing water chewed away at an earthen embankment underneath the tracks.