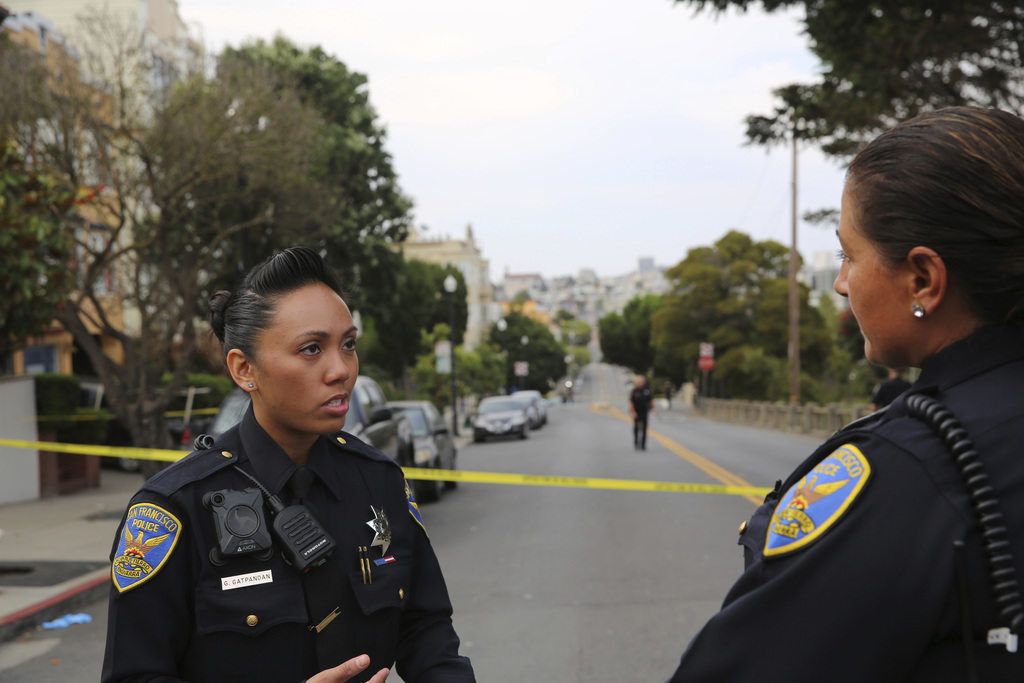 SAN FRANCISCO (AP) — The Latest on a triple shooting at a San Francisco park (all times local):

San Francisco police will station two officers at a popular Mission District park during the day and night following a shooting that wounded three people and sent others running for safety.

KTVU reports (http://bit.ly/2fdBhcN ) that it's not clear when the extra patrols will begin at Dolores Park.

Police say the shooter or shooters remain at large. A motive has not been determined for the Thursday shooting.

Authorities say one man remained in critical condition Friday morning and another was treated and released.

Another hospitalized victim is a teen and no details were being released.

Police continued the hunt for a gunman who opened fire in a Mission District park crowded with parents, children and tourists on a warm summer's day, wounding three people and sending panicky people running for safety.

Investigators were trying to determine a motive for Thursday's attack, which turned normally peaceful Dolores Park into a chaotic scene of bleeding victims and fleeing visitors.

A man who identified himself only as Hatter said the attack came after park regulars confronted about a half-dozen men who were shouting and acting threateningly on a park bridge.

Some of those men wore bandannas covering most of their faces, he said.

Hatter said he "went up there to mediate and make sure everything was OK and nobody was fighting," he told the San Francisco Chronicle.

As he approached, someone shouted "They're strapped, bro!," meaning they had guns. A second later, one man pulled a handgun and rapidly fired six or seven shots, he said.

Two people directly behind him were struck, one in the head and another in the leg, Hatter said, while he escaped with a leg injury, possibly from a fragment of a ricocheting bullet.

"I normally can handle (myself) well in these situations, but I was pretty sure I had just lost my life," Hatter said.

Antonia Juhasz, who has lived in the neighborhood for more than 20 years, was reading a book on a bench when she heard gunshots and at first thought they might be firecrackers.

Then she saw a man holding a gun.

The park, which sits on a hill, was crowded with people, including children in a playground and running around the grass.

"At first people didn't totally react because it sounded like fireworks," said Juhasz, a writer and freelance journalist. "I was yelling at people, 'It's actually a gun, it's actually a gun.'"

Juhasz told the Chronicle that she started shooing children to get down, then crouched behind a trash can and called 911.

Other people dove into the grass or crouched behind trees or benches or ran into the streets.

Josh Long of San Francisco told the newspaper that he was about 20 yards away from the shooting. He saw a bloody victim writhing on the ground and a man in a hoodie pulled over his head sprinting away.

One man remained in critical condition Thursday evening and another was treated and released, said Brent Andrew, spokesman for San Francisco General Hospital.

Another hospitalized victim is a minor and no details of his condition were being released, Andrew said.