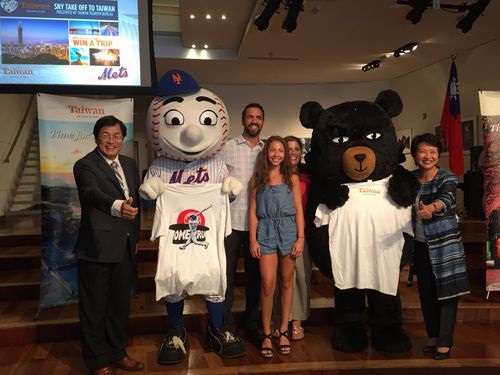 TAIPEI (Taiwan News) In a bid to attract more American visitors to Taiwan, Taiwan's Tourism Bureau announced that it will hold a series of events in collaboration with the New York Mets baseball team.

During the Taiwan tourism week that starts on Aug. 14, a series of commercials promoting tourism to Taiwan will be aired on SNY, a regional sports television network owned mainly by the New York Mets.

Videos promoting Taiwan tourism will also be aired on the Citi Field big screen on Aug. 16, when the Mets host the New York Yankees for the third Subway Series game of 2017. CitiField is the home stadium of the New York Mets.

The Tourism Bureau will give away 40,000 free T-shirts to fans who attend an Aug. 18 game between the Mets and the Miami Marlins.

For those who like culture with their sport, on Aug. 20, there will be traditional Taiwanese performances at Mets Plaza outside the ballpark.

Meanwhile, the bureau said it is holding a lucky draw called "Take off to Taiwan Sweepstakes" in cooperation with SNY, in which two winners will be offered free trips to Taiwan with five-star hotel accommodation.


Everyone who fills in an online questionnaire at www.SNY.tv/TaiwanTourism between Aug. 7 and Sept. 4 will be eligible to enter the lucky draw.

Michael Chang (張維庭), director of the Tourism Bureau's New York office, said that in the first half of this year, the number of North American visitors to Taiwan increased 10 percent from the same period of last year, and he expressed confidence that 10 percent growth can be achieved for the whole of 2017.