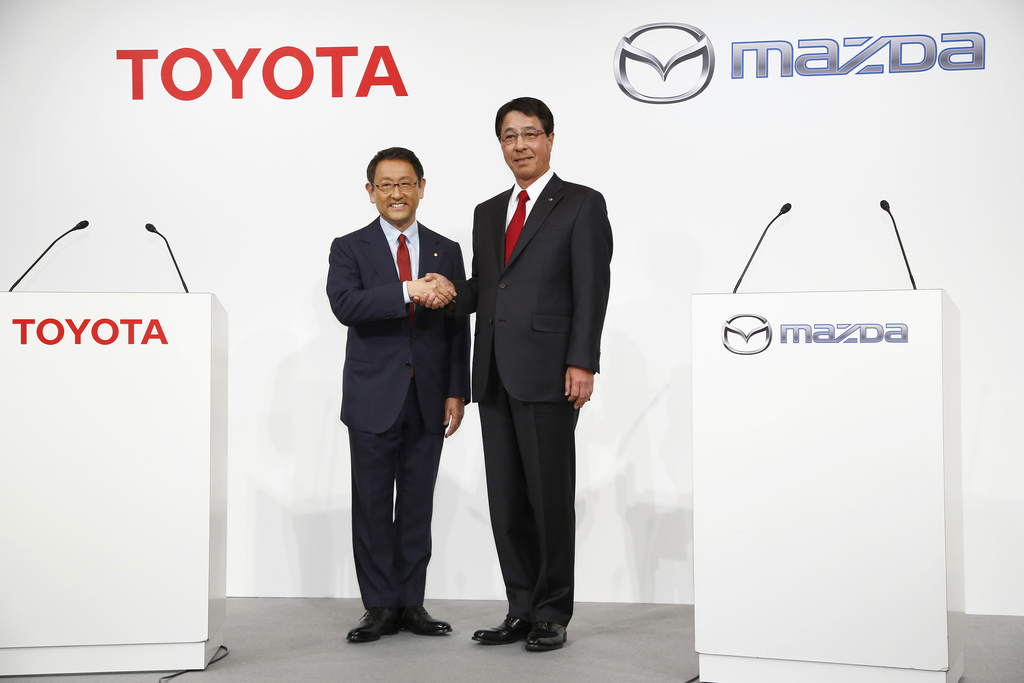 TOKYO (AP) — Japanese automakers Toyota Motor Corp. and Mazda Motor Corp. are revving up on their partnership, reportedly with plans to set up a joint-venture auto assembly plant in the U.S. and work together to develop electric vehicles.

The Japanese Nikkei business daily reported Friday that the two are negotiating an agreement in which Toyota will take about a 5 percent stake in Mazda, and Mazda would also take a stake in Toyota.

Toyota said in a statement that it was planning to propose to its board a partnership with Mazda. It was due to hold a joint news conference with Mazda at a Tokyo hotel later in the day. The company gave no other details. Mazda, which makes the Miata roadster, declined comment.

A person briefed on the matter, who did not want to be identified because an official announcement hasn't been made, confirmed the partnership.

President Donald Trump has been urging Toyota and other Japanese automakers to invest and build more vehicles in the U.S.

Using the same plant to build vehicles can improve cost-efficiency.

EVs have become an increasingly competitive market segment because of concerns about global warming and the environment.

Japanese rival Nissan Motor Co., which is allied with Renault SA of France and Mitsubishi Motors Corp., is the global leader in electric vehicles.

In the past, Toyota, which makes the Prius hybrid, Camry sedan and Lexus luxury models, was not overly bullish on electric vehicles, noting the limited cruise range of the technology. But recent breakthroughs in batteries allow for longer travel per charge.

In 2015, Toyota and Mazda agreed to find new areas where they can work together, but they had not announced specifics.

Mazda, based in Hiroshima, Japan, used to have a powerful partner in Dearborn-based Ford Motor Co., which bought 25 percent of Mazda in 1979, and raised it to 33.4 percent in 1996. But Ford began cutting ties in 2008, and has shed its stake in Mazda.

Also Friday, Toyota reported its April-June profit was 613.0 billion yen ($5.6 billion), up 11 percent from 552.4 billion yen a year earlier. Quarterly sales rose 7 percent to 7.05 trillion yen ($64 billion), as vehicle sales improved around the world, including in the U.S., Europe and Japan.

Toyota is vying for the spot of the world's No. 1 automaker in global vehicle sales against Nissan-Renault and Volkswagen AG of Germany, as the industry gradually consolidates.

A capital tie-up with Mazda would be the latest addition to Toyota's sprawling empire, which includes Japanese truck maker Hino Motors and minicar maker Daihatsu Motor Co. It is also the top shareholder in Fuji Heavy Industries, the maker of Subaru cars.

Her work can be found at https://www.apnews.com/search/yuri%20kageyama