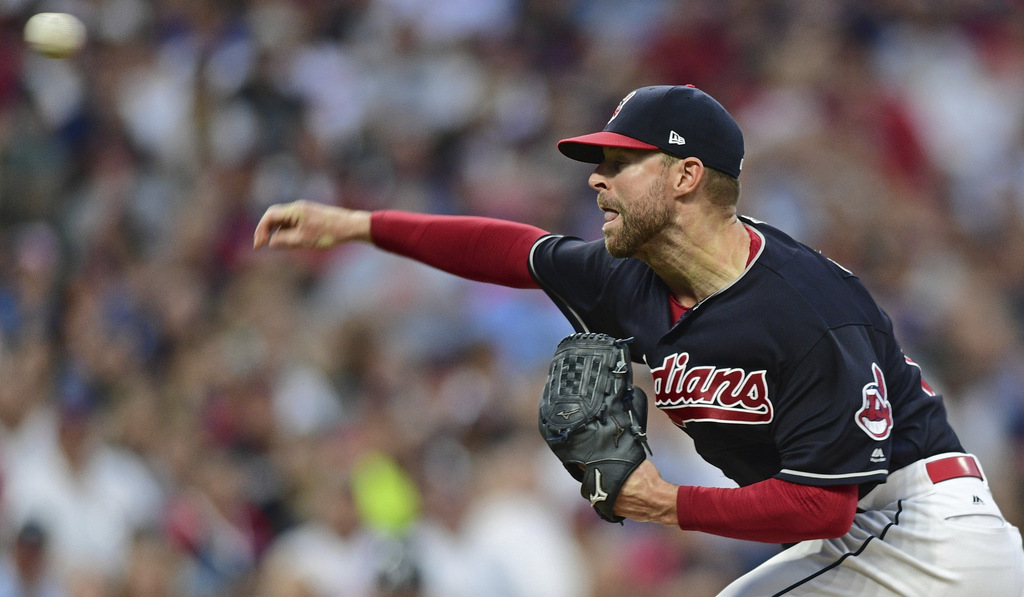 CLEVELAND (AP) — Corey Kluber upstaged Sonny Gray's debut for New York by pitching a three-hitter and leading the Cleveland Indians to a 5-1 win over the sloppy Yankees on Thursday night.

Kluber (9-3) struck out 11 and Cleveland's ace threw his third complete game this season as the defending AL champions won the opener of a four-game series with a potential playoff opponent, ending their losing streak at three.

For five innings, Gray (6-6) was nearly as good as Kluber, but New York made three errors in the first behind the right-hander, who was acquired at Monday's trade deadline from Oakland to help the Yankees return to the postseason.

Yan Gomes broke an 0-for-13 slide by hitting a two-run double to put Cleveland up 4-0.

With his latest dominant performance, Kluber joined Hall of Famers Randy Johnson, Pedro Martinez and Nolan Ryan as the only pitchers to strike out at least eight in 12 consecutive starts.

Kluber carried a two-hit shutout into the seventh before Gary Sanchez belted his 17th homer.

The Yankees sat struggling slugger Aaron Judge. The major league home run leader is batting .164 (11 of 67) with 29 strikeouts since the All-Star break.

CHICAGO (AP) — Paul Goldschmidt hit his third long homer of the game to snap a ninth-inning tie, and Arizona pulled out a rain-delayed victory over Chicago.

Goldschmidt drove a 3-2 pitch from Wade Davis (2-1) deep into the right-center bleachers with one out. J.D. Martinez followed with another solo drive off the All-Star closer.

Goldschmidt's first career three-homer game gave him 25 for the season, and his six RBIs matched a career high.

Brandon Drury also homered for the Diamondbacks, who remained percentage points ahead of Colorado for the top NL wild card.

Willson Contreras hit two home runs and had a career-high six RBIs for the Cubs, who lost consecutive games for the first time since the All-Star break. Their NL Central lead over Milwaukee slipped to 1½ games.

Jake Barrett (1-0) got two outs in the eighth. Fernando Rodney worked around two walks in the ninth to earn his 24th save in 29 chances.

Jose Quintana was hit hard in his fourth start with the Cubs.

DENVER (AP) — Nolan Arenado walked with the bases loaded in the bottom of the ninth inning to give Colorado a win over New York.

Charlie Blackmon and Mark Reynolds homered for the Rockies, who maintained a 5 1/2-game lead over Milwaukee for the second NL wild card.

Mets reliever Hansel Robles (6-3) began the ninth by hitting Jonathan Lucroy with a pitch. After a sacrifice by Pat Valaika, Blackmon was intentionally walked and DJ LeMahieu loaded the bases with another walk.

Robles got Arenado down 0-2 but the All-Star third baseman worked the count full. Robles sent his last pitch to the backstop behind home plate, bringing in Lucroy with the winning run.

Greg Holland (2-1) pitched the ninth for Colorado. Holland had missed two games after cutting his right index finger in his kitchen.

Yoenis Cespedes homered for the Mets.

MILWAUKEE (AP) — Keon Broxton drove in the go-ahead run and saved one with a leaping catch, Matt Garza made a strong start in his return from the disabled list, and Milwaukee edged St. Louis.

Broxton, who robbed Jose Martinez of a homer in the second inning, gave the Brewers a 2-1 lead with a single in the fifth off reliever Brett Cecil (1-4).

Garza (5-5), making his first start since July 21 because of a right leg strain, allowed one run and four hits in 5 2/3 innings to give Milwaukee its first home series win over St. Louis since July 2012. The Brewers won for just the fifth time in their last 17 games.

Corey Knebel worked the ninth and struck out Greg Garcia with two on for his 20th save in 25 opportunities.

Kuhl (4-7) struck out six and walked two as the Pirates beat the last-place Reds for only the second time in 10 tries this season. David Freese went 3 for 4 with two RBIs for Pittsburgh. Andrew McCutchen also drove in a pair of runs. John Jaso's pinch-hit single in the seventh ended an 0-for-34 skid.

The Reds managed just four singles against Kuhl and two relievers as their three-game winning streak was snapped. Billy Hamilton was ejected in the fifth after arguing a called third strike with umpire Todd Tichenor.

ATLANTA (AP) — Alex Wood allowed one run in six innings to avenge his lone loss of the season, Chris Taylor had three hits, including a two-run homer, and Los Angeles defeated Atlanta.

Wood (13-1) evened his record this season against his former teammates. He gave up a career-high nine runs, seven earned, in a 12-3 loss to the Braves on July 21. The left-hander returned to his All-Star form in the rematch, permitting seven hits.

Tony Cingrani, who joined the Dodgers earlier in the day after he was acquired from Cincinnati on Monday, gave up a three-run homer to rookie Ozzie Albies in the ninth. It was Albies' first major league hit.

The Dodgers, whose nine-game winning streak ended Wednesday night, won two of three in the series. They are 21-3 since July 4, with all three losses coming against the Braves.

Mookie Betts hit a two-run homer and slumping Andrew Benintendi went 3 for 3, scoring twice and driving in a run as the Red Sox won their third straight. Benintendi reached base all five times he batted. Hanley Ramirez drove in two runs for Boston.

Nicky Delmonico hit his first career homer, a three-run shot, for the White Sox. Chicago lost its third in a row and fell to 3-15 since the All-Star break.

The Red Sox got 15 hits to back Porcello (5-14), winless in his previous six starts. The reigning AL Cy Young Award winner pitched into the sixth inning and won for the first time since June 23 against the Angels.

The Rays have won three straight since dropping the series opener 14-7, and it's the first time Houston has lost three in a row since June 11-13.

Pitching in relief for the first time this season, Francisco Liriano (6-6) lost in his Astros debut. He was acquired in a trade with Toronto on Monday.

Tampa Bay trailed 3-2 in the seventh but tied it on an error by third baseman Alex Bregman. Souza doubled to put the Rays up 5-3, and Dickerson made a terrific catch in left field to end the bottom half with two runners in scoring position.

Brad Boxberger (3-3) was part of a Tampa Bay bullpen that combined for five scoreless innings. Alex Colome pitched a perfect ninth to convert a save for the third straight day and give him 33 this season.

MINNEAPOLIS (AP) — Joey Gallo hit another massive homer, a three-run shot in the fourth inning that spurred Texas to a victory over Minnesota.

A.J. Griffin (5-2) made his first start in more than two months, giving up one run and two hits over six innings in a resounding return from a muscle strain around his chest. He last started on May 26 and last won on May 9.

Gallo has 29 home runs this season, with four long balls in the last three games. He connected off starter Adalberto Mejia (4-5) to break a tie.

Alex Claudio closed for his fifth save.

The Royals rallied from deficits of 2-0 and 3-2 for their 32nd comeback victory. They snapped a three-game losing streak.

Moss homered in the fifth off Yovani Gallardo after Mike Moustakas walked. That snapped a four-game homerless drought for the Royals, which matched their longest of the season.

Ryan Buchter (1-0) threw one pitch and picked up the win. Kelvin Herrera got his 24th save in 27 chances.

Ian Kinsler hit his 45th career leadoff home run for the Tigers, who built a 7-0 lead in the third inning and ended Baltimore's five-game winning streak.

After enduring nearly five hours of rain delays Wednesday at Yankee Stadium, Detroit ran into more troublesome weather at Camden Yards. The game began 43 minutes late, and only four batters went to the plate before another shower produced a stoppage of 59 minutes.

Baltimore's second triple play of the season occurred in the second inning. With runners on first and second, Tigers catcher James McCann hit a grounder to third baseman Manny Machado, who stepped on third and whipped a throw to second baseman Jonathan Schoop. The relay to Chris Davis beat McCann to complete the around-the-horn triple play.

Tim Beckham had three hits, including his first homer with the Orioles to make it 7-5 in the eighth.

Miguel Cabrera doubled in two runs in a five-run third that ended Tillman's ineffective outing. He allowed seven runs, five earned, in two-plus innings and has gone 14 straight starts without a win.

Tigers reliever Warwick Saupold (3-1) went 1 2/3 innings for the win, and Shane Greene worked a perfect ninth for his third save.

ANAHEIM, Calif. (AP) — Mike Trout hit an early two-run homer and Los Angeles scored twice in the eighth inning to edge Philadelphia for its 12th consecutive victory over the Phillies.

Andrelton Simmons keyed the decisive rally with a double and scored the go-ahead run on a wild pitch by Luis Garcia (1-2).

Yusmeiro Petit (3-0) threw two scoreless innings in relief, and Bud Norris pitched the ninth for his 17th save.

Nick Williams hit a two-run homer for the Phillies.

Blach connected off Chris Smith in the fifth. His first career home run cleared the 399-foot sign in center field and extended an 8-1 lead.

The Giants got 13 hits as they spoiled the return of A's starter Kendall Graveman (2-3) from a strained shoulder that had kept him out since late May.

Parker, sidelined since breaking his right clavicle crashing into a wall on April 15, was 3 for 5 with two doubles. Brandon Belt hit a two-run homer for the Giants.