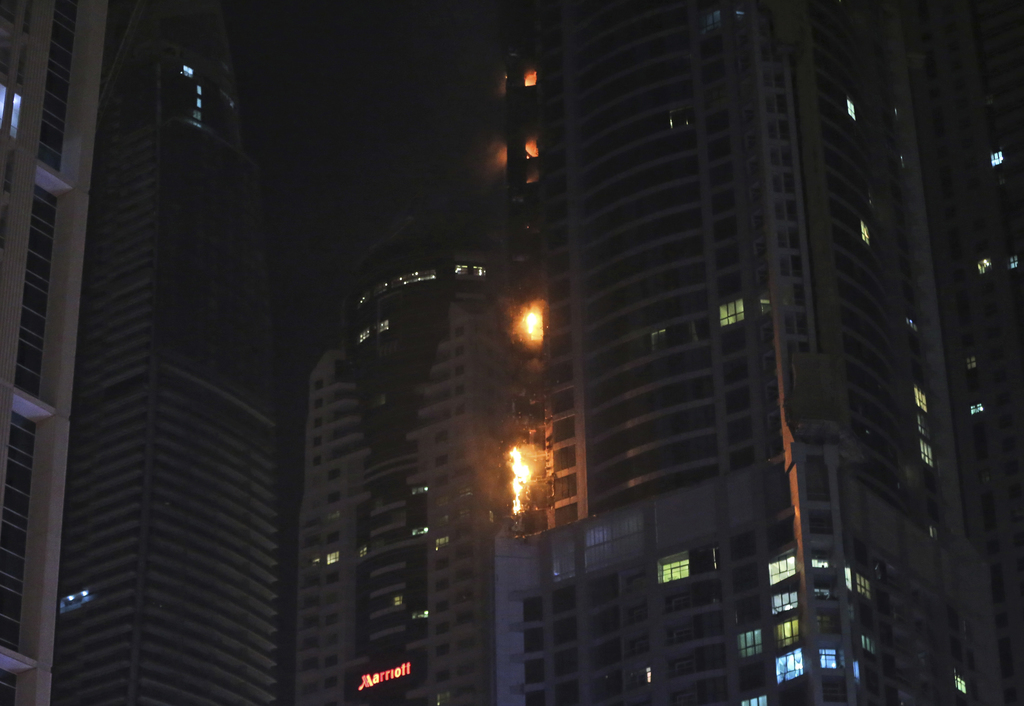 DUBAI, United Arab Emirates (AP) — Firefighters brought under control a blaze that broke out early Friday in one of the world's tallest residential towers in Dubai, engulfing part of the skyscraper and sending chunks of debris plummeting below, the city authorities announced.

More than 40 floors of the 86-story Torch Tower were burning on one side of the building, an Associated Press journalist near the scene of the blaze said. Building residents could be seen on the street outside crying with several saying the fire broke out just after 1 a.m.

Dubai's Civil Defense announced at about 3:30 a.m. that firefighters had brought the blaze under control and that no injuries had been reported.

It was the second time in 2 ½ years that the more than 1,100-foot-tall (335 meters) tower has been ravaged by fire. The tower, located in the popular waterfront Marina district, caught fire in February 2015, but there were no major casualties reported in that blaze.

Early Friday, authorities shared a photo of the charred and blackened tower but it was no longer visibly in flames. Officials said they were now working on providing shelter for those affected.

Dubai police cordoned off several blocks around the building, keeping people away from the fire's falling debris.

Several skyscrapers in the United Arab Emirates have caught fire in recent years, including a towering inferno that engulfed a 63-story luxury hotel in Dubai on New Year's Eve in 2016. In that blaze, as in others in Dubai in recent years, residents escaped without major injury.

Earlier this year, Dubai passed new fire safety rules requiring buildings with quick-burning side paneling to replace it with more fire-resistant siding. Authorities have previously acknowledged that at least 30,000 buildings across the UAE have cladding or paneling that safety experts have said accelerates the rapid spread of fires.

A devastating tower fire in London in June killed at least 80 people and prompted Britain to order more thorough testing on the cladding systems of its towers.