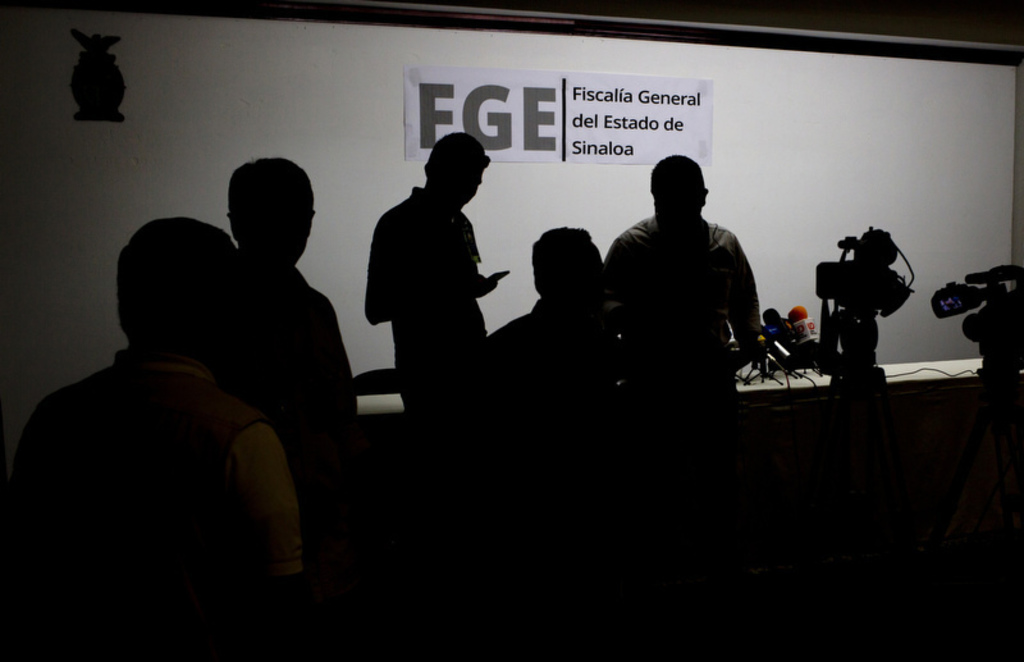 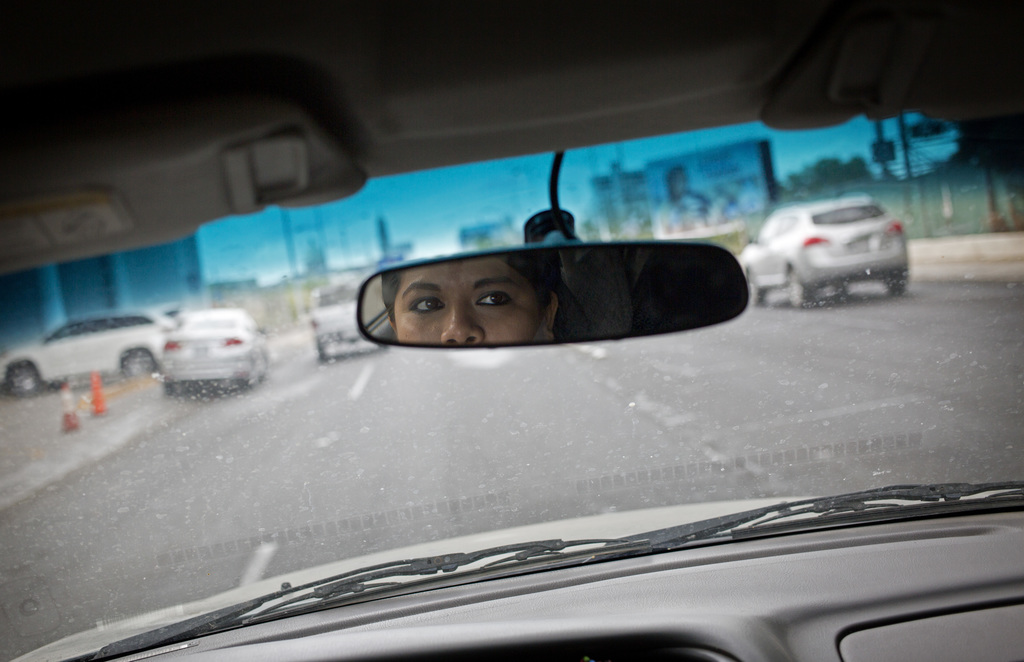 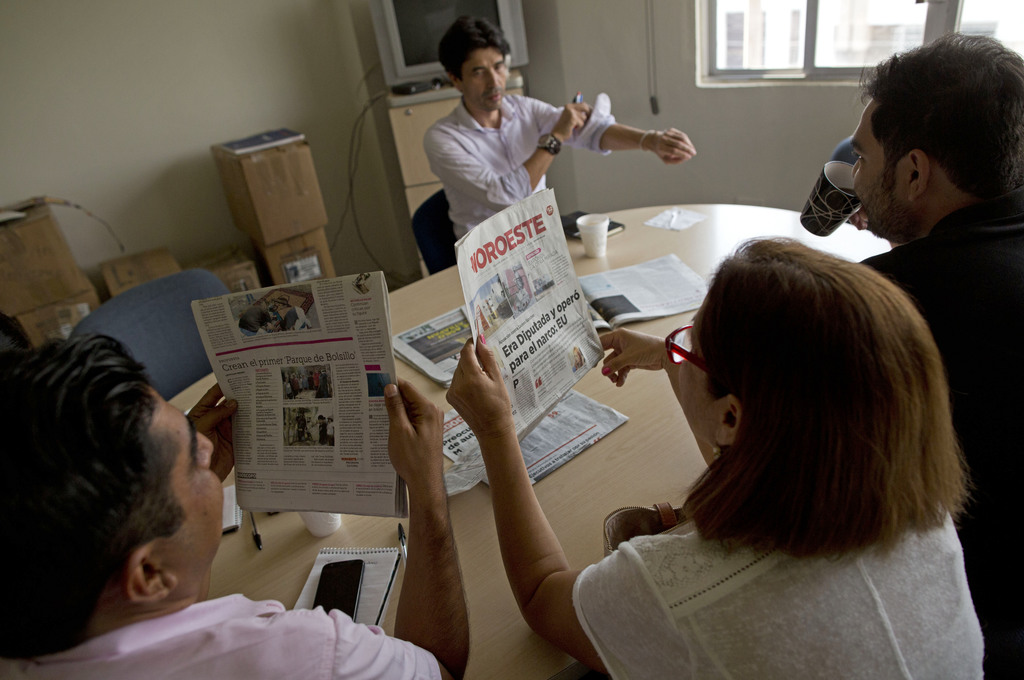 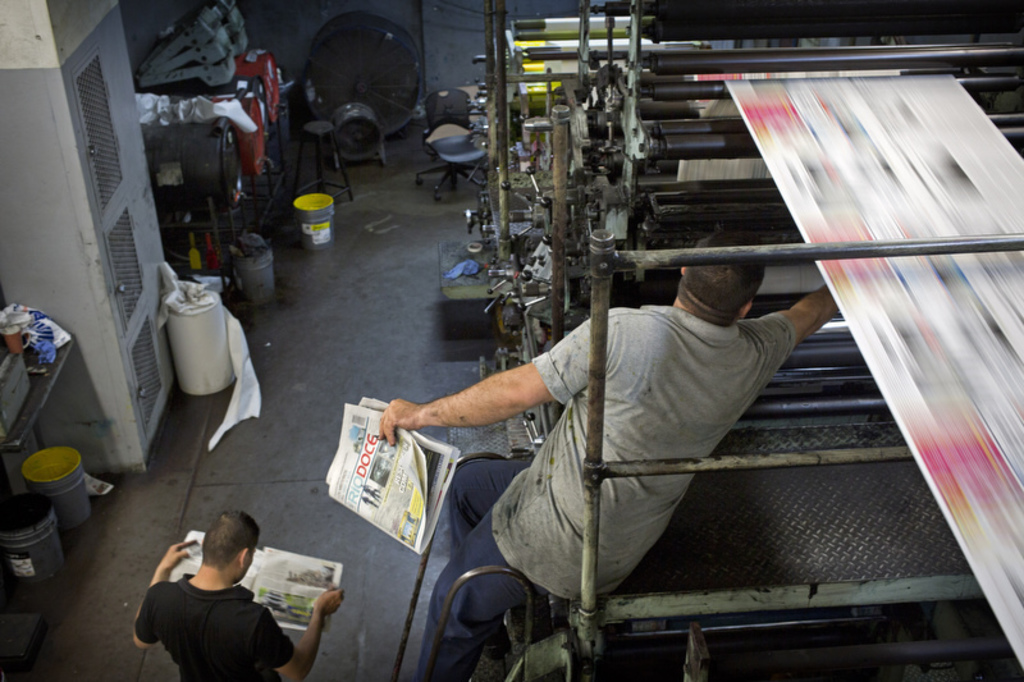 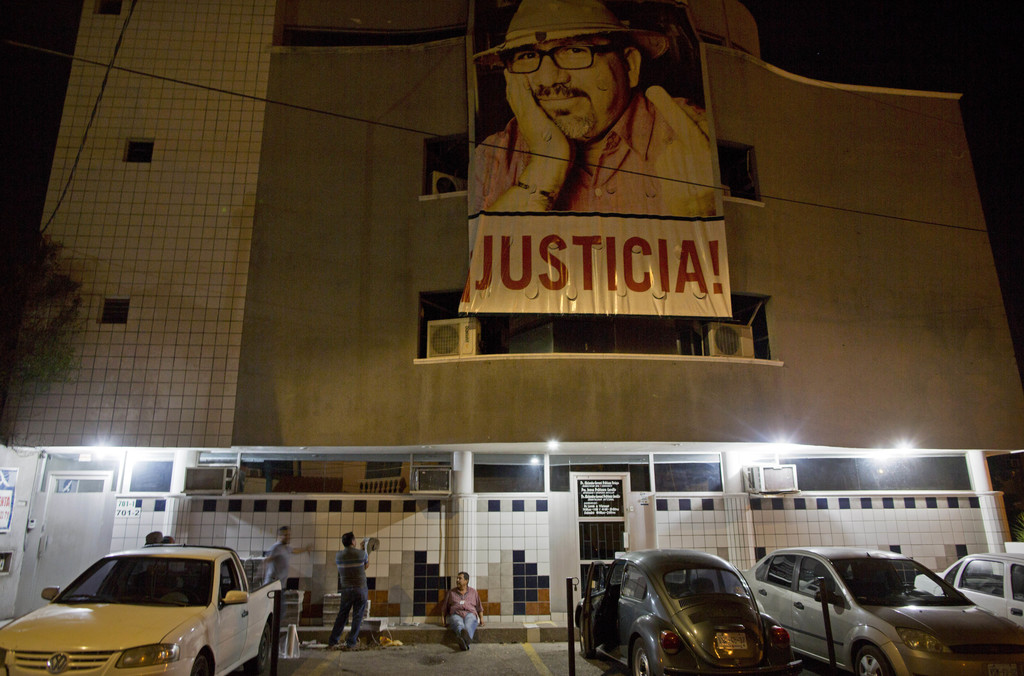 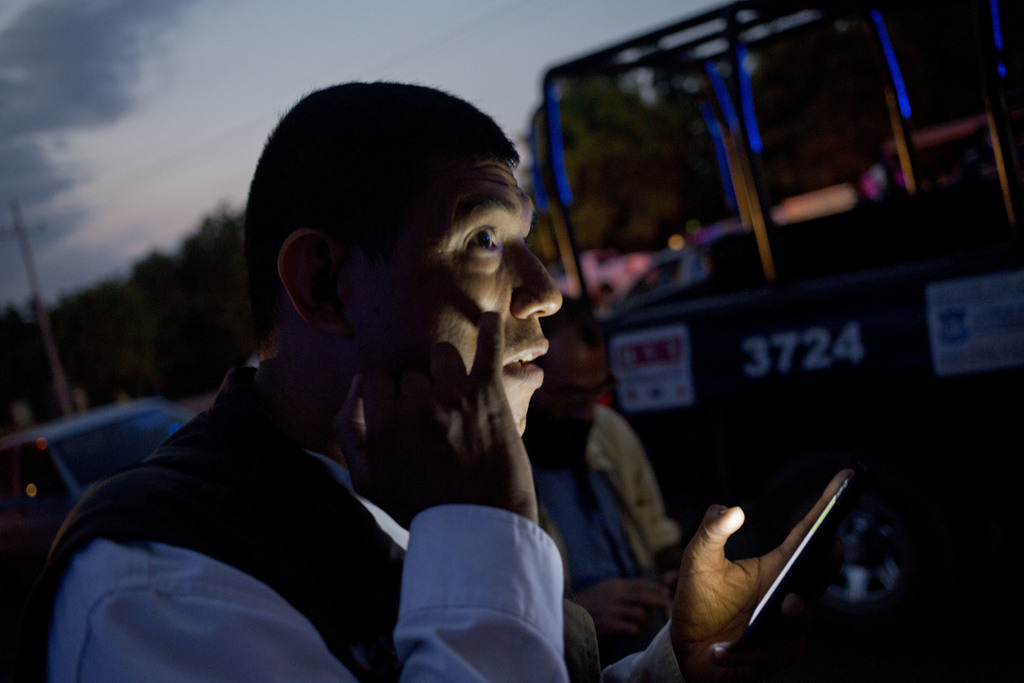 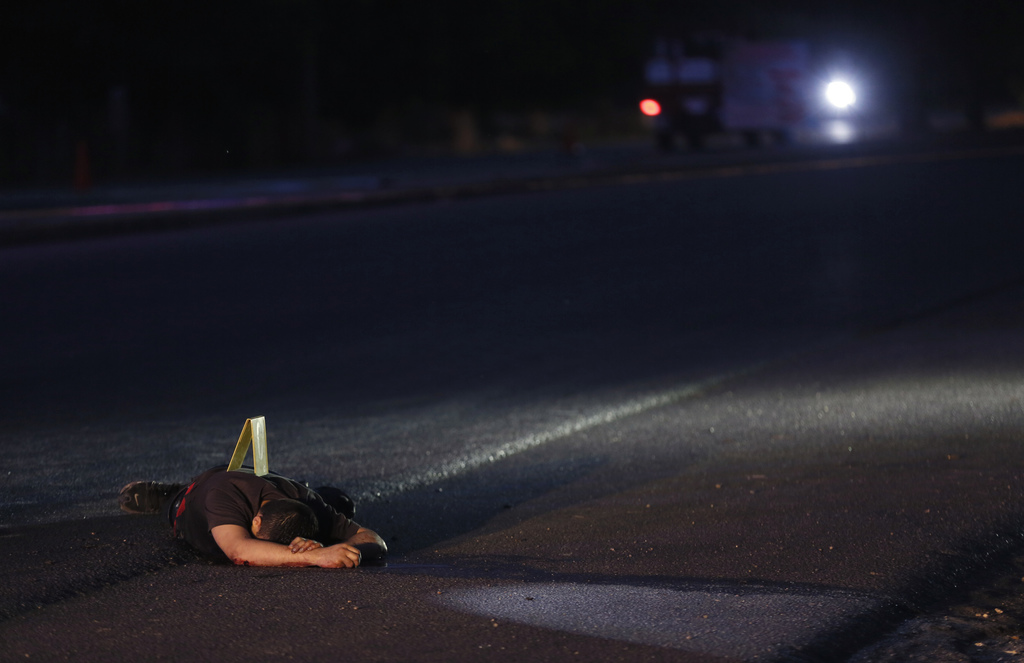 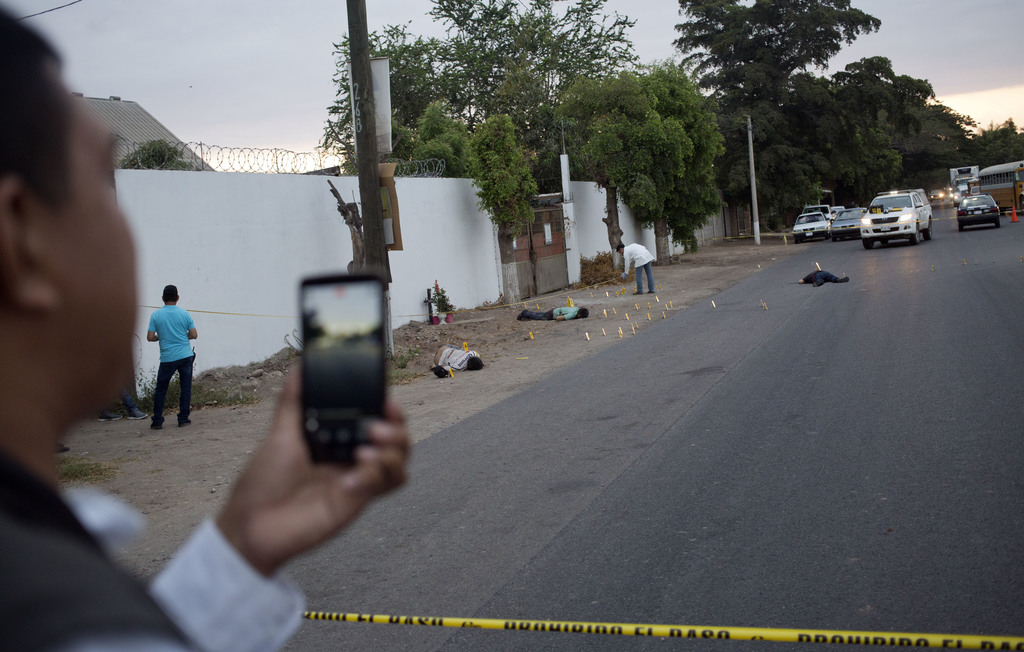 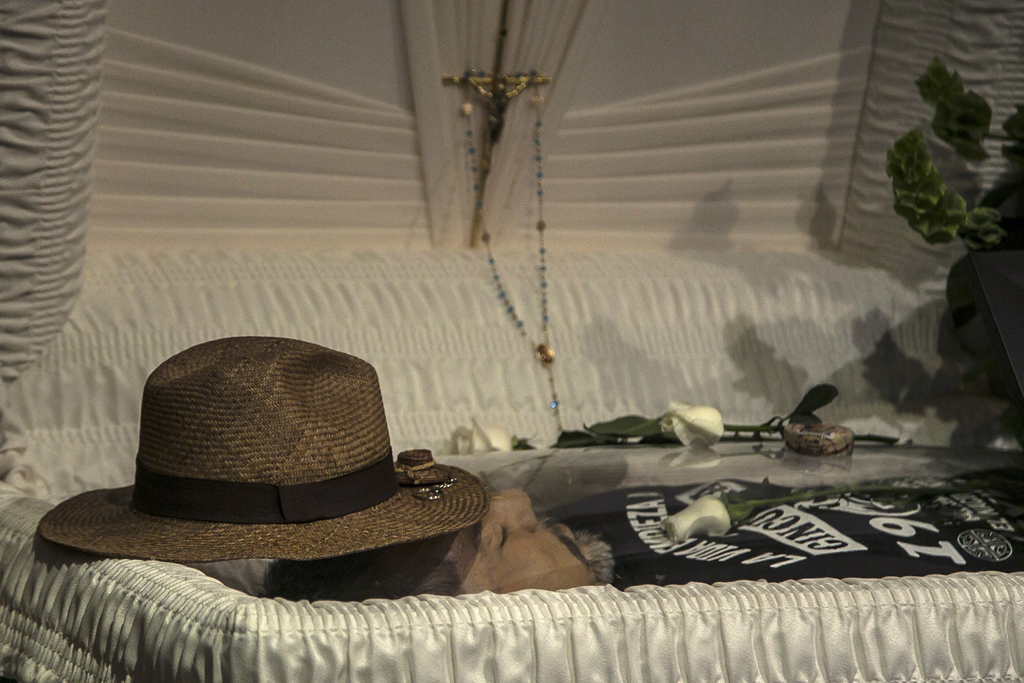 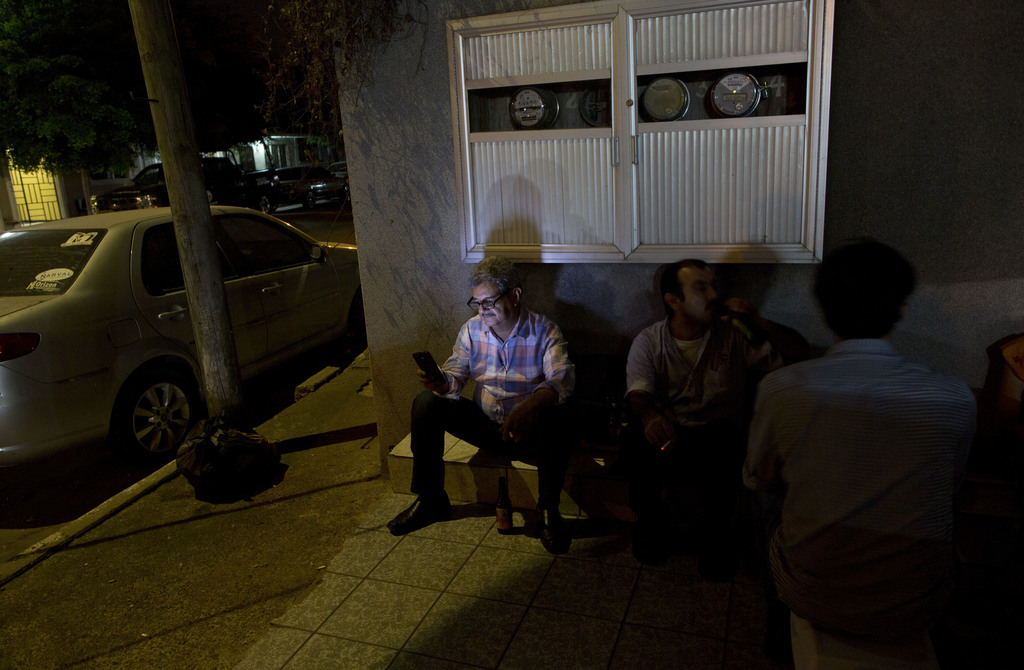 MEXICO CITY (AP) — The absence of editor Javier Valdez Cardenas is deeply felt at the weekly newspaper he co-founded, but his presence is everywhere.

A large photo of Valdez displaying his middle finger, with the word "Justice," hangs on the facade of the Riodoce newspaper building in the Sinaloa state capital of Culiacan. Two reporters in their 30s, Aaron Ibarra and Miriam Ramirez, wear T-shirts that display his smiling, bespectacled face or his trademark Panama hat. The masthead of the paper still bears his name, and each issue has a blank space where his op-ed column should be.

Valdez was one of seven journalists in seven states killed this year for reporting on the mayhem wrought in Mexico by organized crime, corrupt officials and ceaseless drug wars. As bodies pile up across the country, more and more of them are journalists: at least 25 since President Enrique Pena Nieto took office in December 2012, according to the Committee to Protect Journalists, and 589 under federal protection after attacks and threats.

Mexico is now the world's most lethal country for journalists, more even than war-torn Syria. And the killers of journalists in Mexico are rarely brought to justice. Although a special federal prosecutor's office was established in 2010 to handle such cases, it has only prosecuted two, according to the Committee to Protect Journalists.

On the morning of May 15, Valdez left the Riodoce office. He drove just a couple blocks before his red Toyota Corolla was stopped by two men; he was forced out of his car and shot 12 times, presumably for the name of the paper — which translates as Twelfth River.

His body lay for 40 minutes in the middle of a sunbaked street, with a kindergarten on one side and a restaurant on the other, his hat next to his head as if shielding his eyes from distraught family and friends gathering around him.

"I understood that as a message," said Francisco Cuamea, deputy director of the Noroeste newspaper: Anyone could be next.

Valdez, 50, left a wife and two adult children. There have been no arrests — which is no surprise to the national press corps.

"Nobody wants to get involved with the death," said Juan Carlos Ayala, a professor at the Autonomous University of Sinaloa who has spent 40 years studying violence in the state. Authorities have been silent about any progress in the case. "Either they're complicit, or they're idiots."

Sinaloa is home to the cartel of the same name that was long run by notorious kingpin Joaquin "El Chapo" Guzman. Since Guzman's arrest last year and extradition to the United States in January, Sinaloa has been one of the country's bloodiest battlegrounds, as rival factions fight to fill the vacuum. Someone or several people are shot dead in the street every day in Sinaloa, and the cemetery is filled with ornate, two-story mausoleums for drug kings, larger than many homes for the living.

In Sinaloa, "it was impossible to do journalism without touching the narco issue," said Ismail Bojorquez, a co-founder and director of Riodoce, who is wracked with guilt for failing to protect his friend.

When Valdez won an award from the Committee to Protect Journalists for his courage in 2011, he freely acknowledged that he was frightened. "I want to carry on living," he said at the time. "To die would be to stop writing."

His death has forced other journalists to question their own assumptions about how best to do their jobs and stay alive.

It used to be that there were certain unwritten rules. It was OK to report on corruption as long as you were careful not to publish key details or appear to take sides. You must think carefully about story placement and timing. Don't accept money from anyone. Know the red lines for crime gangs.

The old rules, journalists say, no longer apply. In times of fracturing cartels, shifting political alliances and near-total impunity for attacks on journalists, it's no longer clear who can and can't be trusted, what is or isn't safe to report.

Less than two months after Valdez' death, the Riodoce staff met to talk about security.

It's important to change their routines, they were told. Be more careful with social media. Don't leave colleagues alone in the office at night. Two senior journalists discussed what felt safer: to take their children with them to the office, which was the target of a grenade attack in 2009, or to leave them at home.

Security experts wrote three words on a blackboard: adversaries, neutrals, allies. They asked the reporters to suggest names for each column.

Allies are crucial. In an emergency, they would need a friend, a lawyer, an activist to call.

The longest list, by far, is enemies. There are drug-traffickers, politicians, businesspeople, journalists suspected of being on the payroll of the government or the cartels, a catalog of villains who make the job of covering Mexico's chaos a daily dance of high-risk decisions.

Ramirez was unsettled by a recent Facebook comment on a story of hers about shell companies contracted by a previous governor. "These reporters are looking to end up like Javier Valdez," said the anonymous poster, though the comment was later deleted.

Still, she says she has no intention of giving up on Riodoce or its mission.

"We have a commitment to Javier, to ourselves," said Ramirez.

Ibarra admits that covering the drug trade scares him. But he, too, intends to remain.

"Mexico is going to hell," he said, "and that's why I became a reporter."