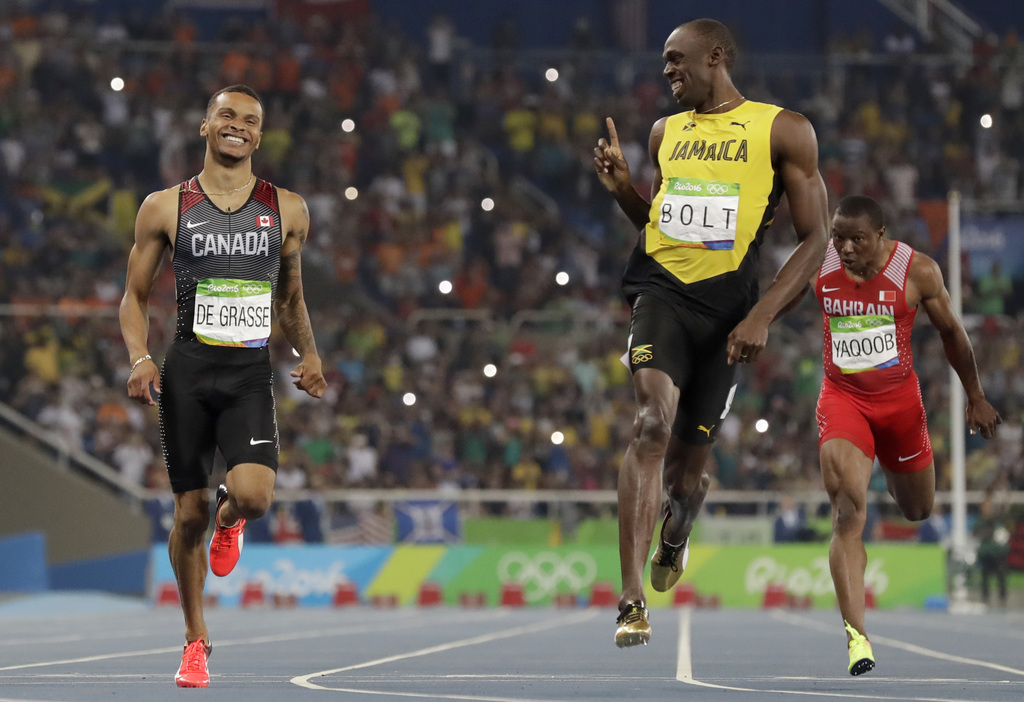 LONDON (AP) — Hardly a week goes by without someone mentioning Usain Bolt and his playful finger wag toward the Canadian sprinter.

It was a point of pride for Andre De Grasse — the Jamaican great acknowledging his presence at the Rio de Janeiro Olympics. Even more to the point: It was a potential sign of things to come, even if De Grasse's bright future won't be on display this week at world championships.

The rematch between De Grasse and Bolt was ruined when the Canadian pulled out with a hamstring injury. It would have been De Grasse's last chance to push Bolt, who is retiring after the meet, and a chance to cement his spot as the heir apparent in the sprint game.

"To not have this opportunity is unimaginable to me but it is the reality I am faced with," De Grasse said late Wednesday in a statement. "I am sad to miss this chance but I am young and will be back and better than ever in the near future."

His future never looked brighter than at last year's Olympics in the 200-meter semifinals. Those heats are supposed to be walk-in-the-park tune-ups for The World's Fastest Man. But De Grasse made Bolt work for it. After nearly getting caught, then pulling away — much later than expected — Bolt glanced over, stared down the brazen 22-year-old Canadian, grinned and shook his finger at the youngster for pushing him so hard.

Bolt clearly hasn't forgotten that race. When asked, earlier in the week, to predict who the next great sprinter would be, the world-record holder refused to mention De Grasse by name, though the reference to last year's race in Rio was unmistakable.

"The last guy I said was going to be great disrespected me," Bolt said.

Should De Grasse become the next sprint champion, he will remind nobody of Bolt. At 6-foot-5, Bolt is uncommonly tall for a sprinter. De Grasse is eight inches shorter.

Bolt is conventionally trained on the track. De Grasse is a basketball player who went to the track on a whim.

He bumped into a friend on the bus in high school. A speedy point guard at the time, De Grasse had no clue how he would do in a track meet, but felt confident he could beat his friend.

They made a friendly wager — and De Grasse backed up his braggadocio. Wearing baggy basketball shorts and borrowed spikes, he started from a standing position instead of uncoiling from the blocks.

"Just kind of winged it," De Grasse recalled of that day in 2012. "I ended up beating my friend and was totally shocked."

In the stands that afternoon was Tony Sharpe, a Jamaican-born sprinter who captured an Olympic bronze medal in the 4x100 relay for Canada at the 1984 Los Angeles Games. On the lookout for new talent for his speed academy, he did a double-take at De Grasse's time — 10.9 seconds with no form at all.

De Grasse trained with Sharpe and hit his stride after only a couple lessons. A few weeks later, he won the 100 meters at the Toronto International Track and Field Games. He was so new to how things worked that when they asked him to step onto the medal stand, De Grasse took the spot for the third-place finisher.

The presenters pointed him toward the top step, which is now the goal at every meet.

"I was like, 'What are you all about, kid? What do you want your future to be?'" Sharpe said.

De Grasse's arrival on the international scene began in 2015, when he tied for the 100-meter bronze medal at world championships in Beijing — a bit player in the scintillating showdown between Bolt and American rival Justin Gatlin.

A year later, De Grasse was hamming it up with Bolt in Brazil, though it wasn't all fun and games. Bolt was looking for the world record, maybe to even break the 19-second barrier in the 200, his signature race. He fell short, and among the reasons he cited was De Grasse's decision to push him the night before in the semifinals.

Asked this week if he has any relationship with De Grasse, Bolt brushed it off.

De Grasse is well aware of what that moment meant for him: "It put me in the spotlight, you could say."

But he isn't fooling himself.

There will never be another Usain Bolt. Still, someone has to win these races once Bolt is gone.

"I still have to become a lot faster to reach what he's done," he said. "But I feel like I'm on the right path."

He can tell not only from the results on the track, but from some of the reactions off it — especially in his home country.

"The other day, someone was like, 'Hey, you're Andre De Grasse. Can I get a picture?'" he said. "I'm like, 'Sure. But can we go outside the bathroom for the picture?'"