Even though China’s land is three times the size of India, it is predicted that India’s population could surpass that of China’s at around 2024.

Currently China has a population of 1.41 billion, and India has 1.34 billion people. Both remain the two most populous countries in the world, comprising 19 percent and 18 percent of the total world population, respectively, according to the new UN report.

The UN Department of Economic Social Affairs’ Population Division forecasts the world population may increase to 8.6 billion by 2030, 9.8 billion by 2050, and 11.2 billion by 2100.

China’s one child policy, coupled with some economic and social challenges to overcome, has led many Chinese couples to stick to just having one child or none at all. China’s aging population is also a concern for the country, which is seeing an increasing number of elderly people.

India’s population has been increasing since the country became independent in 1947; however, the speed of growth, which was still very high at around 17.7 percent in the decade leading to 2011, is slowing down significantly.

The other most populous Asian countries include Indonesia with a population of 258 million, Pakistan with 189 million, Bangladesh with 161 million, Japan and Philippines with 127 million and 101 million, respectively, according to the UN report.

Bhutan, Brunei and Maldives are the least populated Asian countries, according to the report. 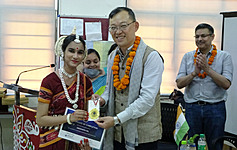