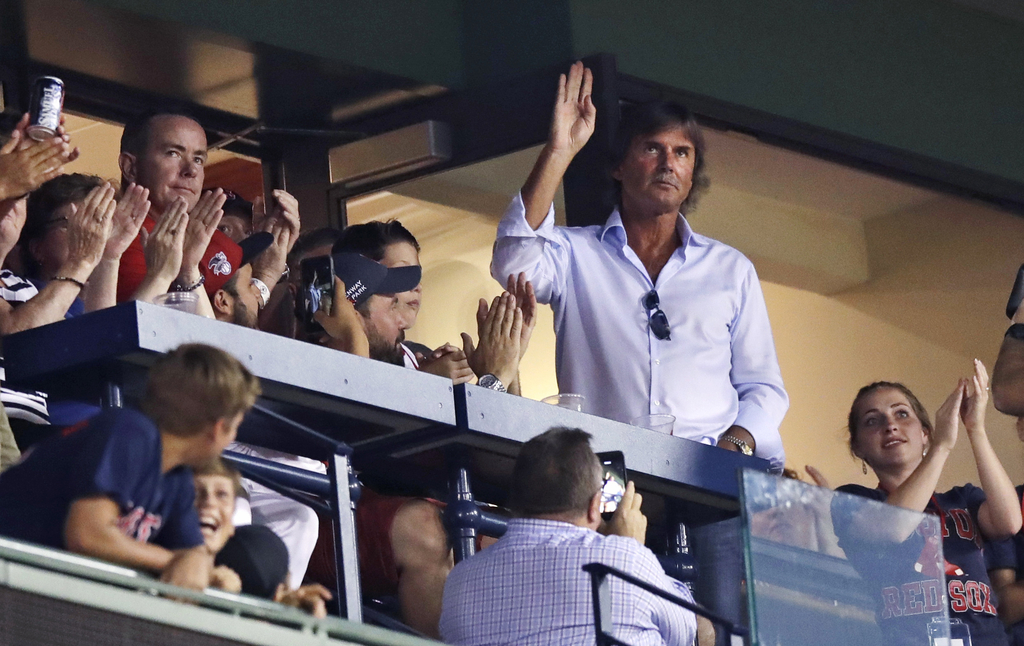 David Price sure has a lot of issues for a guy making $31 million a year.

It showed in June when the pitcher went off on the Boston media over some perceived slights. Nothing terribly newsworthy there, and Price is certainly not the first player to take his frustration out on those who cover baseball.

But when he went after Dennis Eckersley, it became a different story.

We saw it Tuesday night at Fenway Park, where Eckersley basked in a warm ovation from the home crowd when introduced between innings. They've decided who the good guy is in this dustup, and it's not Price.

What was even better was what analyst Jim Kaat had to say while announcing the game for MLB Network.

"David Price didn't confront Dennis Eckersley, he attacked him like a schoolyard bully," Kaat said. "In front of all his teammates to make him look like a big man."

That is pretty much in nutshell what happened, at least according to accounts of the altercation in the Boston Globe. In front of a group of teammates, Price confronted Eckersley on a team plane for not giving Red Sox players the proper respect while working as an analyst on the team's local broadcast.

The thing is, Eckersley isn't just an announcer. He's a former Red Sox pitcher himself and a first ballot member of the Hall of Fame.

He's also one of the most interesting people around when you want to talk baseball. But apparently Price already knows everything about pitching, so he went after Eckersley for making an offhanded remark about the pitching woes of one of his teammates.

"The point is if you're Price and follow the history of baseball, you have to have a little respect," Kaat said on the broadcast.

Kaat is an old school player doing a game on a network that usually bends over backward not to talk badly about any current players. But both he and broadcast partner Bob Costas seemed to want to go out of their way to make a point about how Eckersley was treated.

Not that Price seems to care. There's been no apology from the pitcher, nothing to say he regrets trying to embarrass Eckersley in front of the team other than a throwaway comment about perhaps someday discussing it with him.

It can't be that Price is too busy pitching. After being sidelines most of the first two months of the season he's on the disabled list again with elbow issues.

In the second year of a seven-year $217 million contract, Price has made only 11 starts all year for the Red Sox. It's hardly the kind of production Boston expected when it signed Price to be the star of a staff that is now led by Chris Sale.

Maybe the pressure of trying to live up to a big contract is getting to him. Or maybe he's just another ballplayer with a sense of entitlement who thinks that because he pitches in the major leagues he knows all there is about the game and the people in it.

Here's what he may not know about Eckersley.

The right-hander started 361 games, which by itself would be a fine career stat for most pitchers. But after being converted to a reliever he saved an astonishing 390 more, mostly for the Oakland A's. At the time of his retirement he had appeared in more games (1,071) than any other pitcher in history.

Eckersley pitched 24 years in the big leagues, the last part coming during the steroid era. And he was elected to the Hall of Fame the first year he was eligible in 2004 with 83 percent of the vote.

And he's handled the Price situation as well as he handled hitters during his prime.

"I'm cool with everything," Eckersley told the Globe on Tuesday. "I've moved on. I'm just going to keep doing what I do, which is call it like I see it. It's all about the Red Sox and the ultimate goal of winning it all."

A team player, even though he's no longer on the team. A former Red Sox who will be celebrated long after Price is gone.

The kind of guy fans stand up and cheer for like they did Tuesday night, and the kind of guy Kaat was more than eager to stand up for when the moment called for it.

"I think he'd (Price) like a (second chance) because he found out how popular Eck is," Kaat said. "He's as honest and candid a guy as there is and deep down he'd love to see the Red Sox win. But as an announcer he calls it like he sees it."

Just like the true Hall of Famer he is.