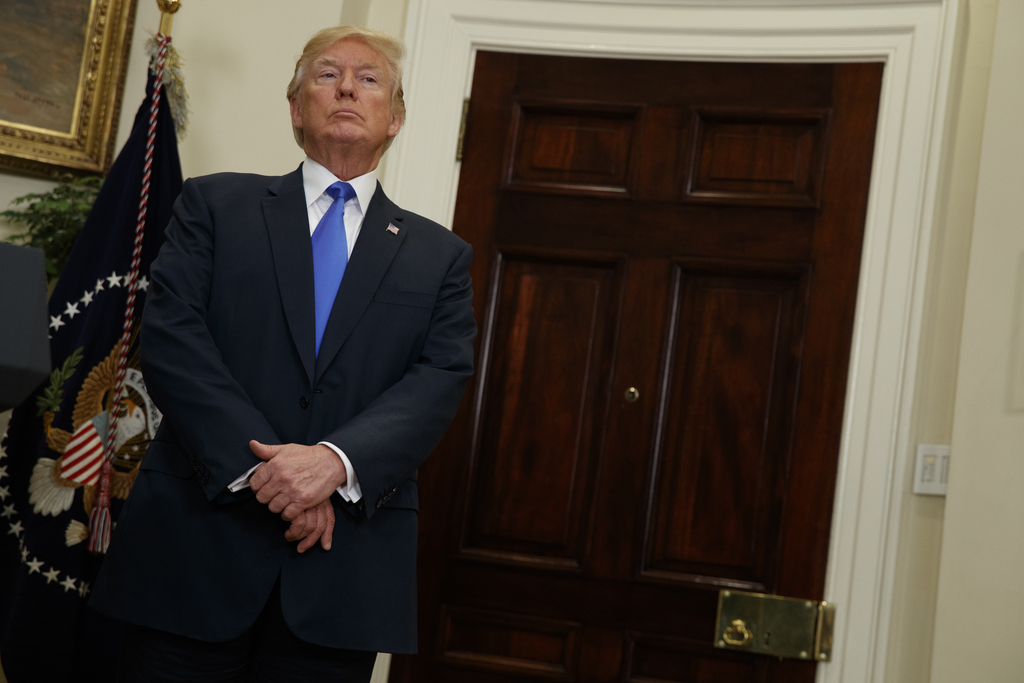 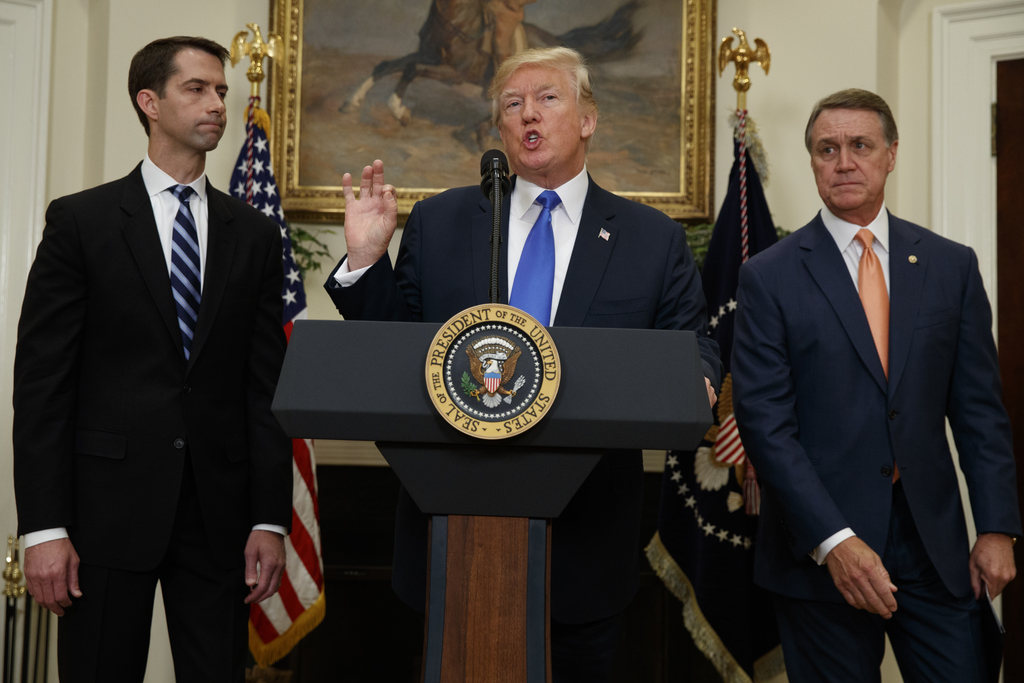 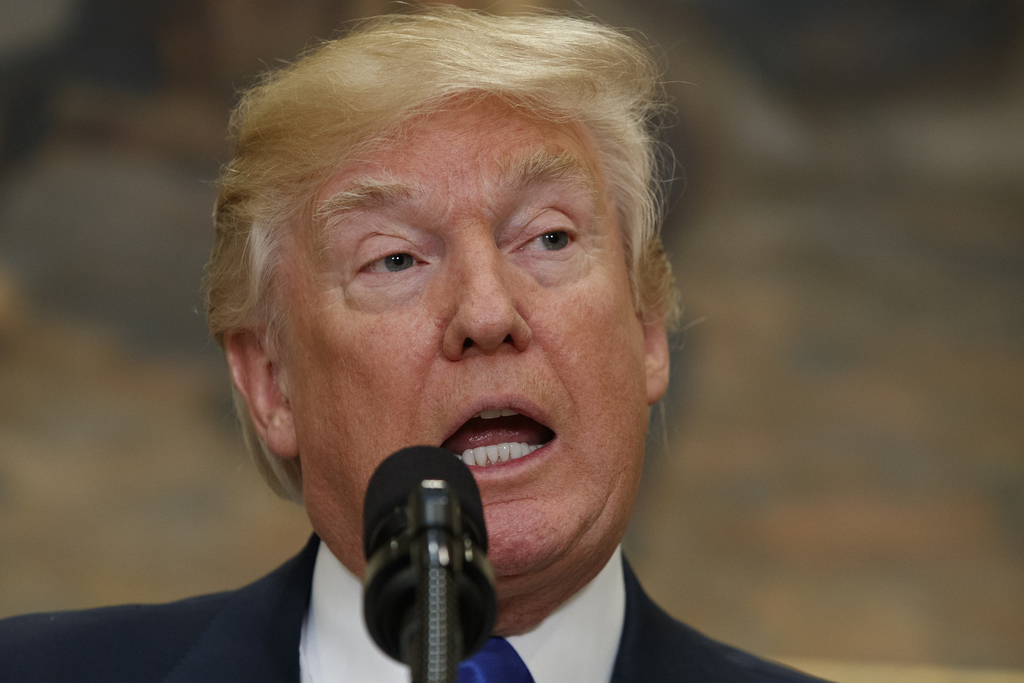 WASHINGTON (AP) — President Donald Trump has embraced legislation that would dramatically reduce legal immigration and shift the nation toward a system that prioritizes merit and skills over family ties.

Trump joined with Republican Sens. David Perdue of Georgia and Tom Cotton of Arkansas to promote the bill, which so far has gained little traction in the Senate.

"This legislation demonstrates our compassion for struggling American families who deserve an immigration system that puts their needs first and puts America first," Trump said during an event Wednesday in the White House's Roosevelt Room.

It was the latest example of the president championing an issue that animated the core voters of his 2016 campaign, following decisions to pull out of the Paris climate treaty and ban transgender people from the military.

Perdue and Cotton's legislation would replace the current process for obtaining legal permanent residency, or green cards, creating a skills-based point system for employment visas. The bill would also eliminate the preference for U.S. residents' extended and adult family members, while maintaining priority for their spouses and minor children.

Overall, immigration would be slashed 41 percent in the legislation's first year and 50 percent in its 10th, according to projection models cited by the bill's sponsors. The bill would also aim to slash the number of refugees in half and eliminate a program that provides visas to people from countries with low rates of immigration.

The rollout included a combative press briefing led by Trump policy aide Stephen Miller, who clashed with the media over the plan and accused one reporter of being "cosmopolitan" when he suggested it would only bring in English-speaking people from Britain and Australia.

The president has made cracking down on illegal immigration a hallmark of his administration and has tried to slash federal grants for cities that refuse to comply with federal efforts to detain and deport those living in the country illegally.

But he has also vowed to make changes to the legal immigration system, arguing that immigrants compete with Americans for much-needed jobs and drive wages down.

Most economists dispute the president's argument, noting that immigration in recent decades doesn't appear to have meaningfully hurt wages in the long run. Increased immigration is also associated with faster growth because the country is adding workers, so restricting the number of immigrants could slow the economy's potential to expand.

Backers said the bill would sharply increase the proportion of green cards available to high-skilled workers and would not affect other high or low-skilled worker visa programs such as H1-B and H2-B visas. The Trump Organization has asked for dozens of H-2B visas for foreign workers at two of Trump's private clubs in Florida, including his Mar-a-Lago resort.

The White House said that only 1 in 15 immigrants comes to the U.S. because of their skills, and the current system fails to place a priority on highly skilled immigrants.

But the Senate has largely ignored a previous version of the measure, with no other lawmaker signing on as a co-sponsor. GOP leaders have showed no inclination to vote on immigration this year, and Democrats quickly dismissed it.

"The bottom line is to cut immigration by half a million people, legal immigration, doesn't make much sense," said Senate Democratic leader Charles Schumer of New York, who called it a "nonstarter."

The bill would create a new points-based system for applicants seeking to become legal permanent residents, favoring those who can speak English, have high-paying job offers, can financially support themselves and offer skills that would contribute to the U.S. economy. A little more than 1 million green cards were issued in 2015.

In a nod to his outreach to blue-collar workers during the campaign, Trump said the measure would prevent new immigrants from collecting welfare for a period of time and help U.S. workers by reducing the number of unskilled laborers entering the U.S.

But the president is mischaracterizing many of the immigrants coming to the United States as low-skilled and dependent on government aid.

Trump has long advocated for the changes and vowed during an immigration speech in Phoenix last August to overhaul the legal immigration system "to serve the best interests of America and its workers." He voiced support for the Senate bill at a rally last week in Ohio, where his call for a "merit-based system" that "protects our workers" generated loud cheers.

Some immigrant advocates have criticized the proposal, saying that slashing legal immigration would hurt industries like agriculture and harm the economy.

"Our system is broken, but the response should be to modernize it, not take a sledgehammer to it," said Jeremy Robbins, executive director of New American Economy, a group backed by former New York City Mayor Michael Bloomberg.