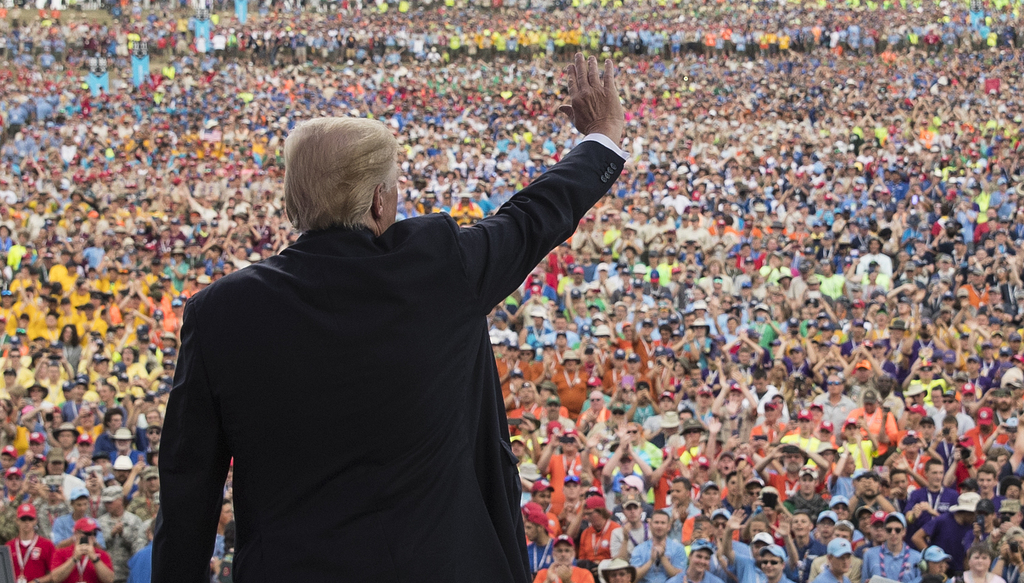 NEW YORK (AP) — The Boy Scouts are denying a claim by President Donald Trump that the head of the youth organization called the president to praise his politically aggressive speech to the Scouts' national jamboree.

Trump told The Wall Street Journal, "I got a call from the head of the Boy Scouts saying it was the greatest speech that was ever made to them, and they were very thankful." Politico published the transcript of the interview.

On Wednesday, the Scouts responded, "We are unaware of any such call." It specified that neither of the organization's two top leaders — President Randall Stephenson and Chief Scout Executive Mike Surbaugh — had placed such a call.

Surbaugh apologized last week to members of the scouting community who were offended by the political rhetoric in Trump's July 24 speech in West Virginia.

Other U.S. presidents have delivered nonpolitical speeches at past jamborees. To the dismay of many parents and former scouts, Trump promoted his political agenda and derided his rivals, inducing some of the scouts in attendance to boo at the mention of Barack Obama, his predecessor.

"I want to extend my sincere apologies to those in our Scouting family who were offended by the political rhetoric that was inserted into the jamboree," Surbaugh said. "That was never our intent."

Surbaugh noted that every sitting president since 1937 has been invited to visit the jamboree.

Stephenson, in a phone interview with The Associated Press two days after the speech, said Boy Scout leaders anticipated Trump would spark controversy with politically tinged remarks, yet felt obliged to invite him out of respect for his office.

Hoping to minimize friction, the Boy Scouts issued guidelines to adult staff members for how the audience should react to the speech. Any type of political chanting was specifically discouraged.

Stephenson, who was not in attendance at Trump's speech, said the guidance wasn't followed impeccably.