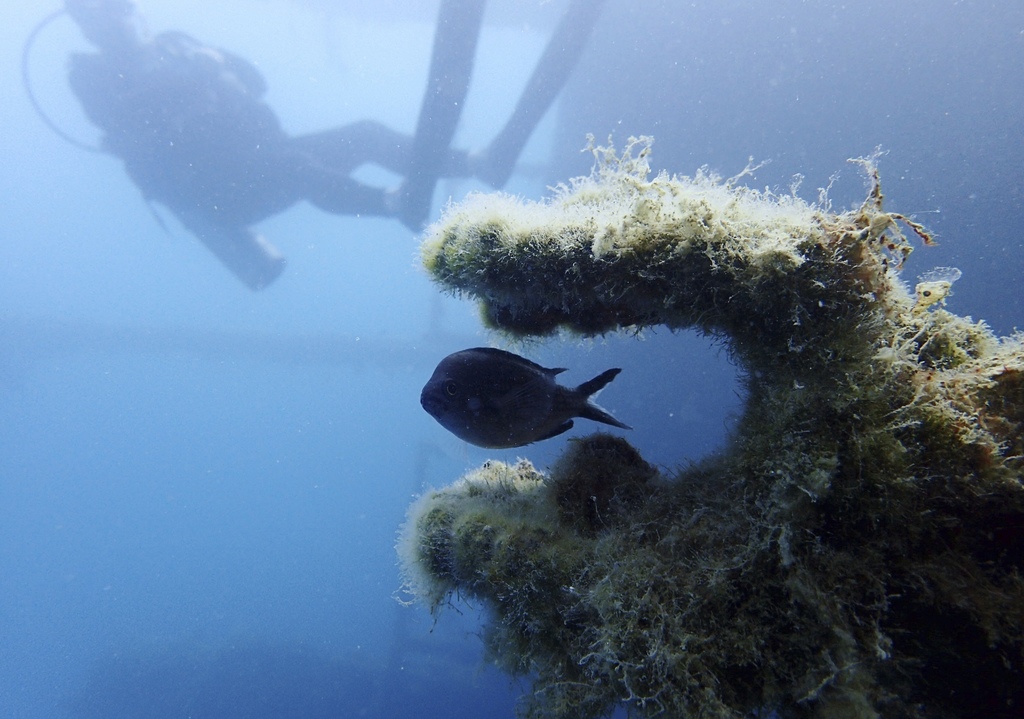 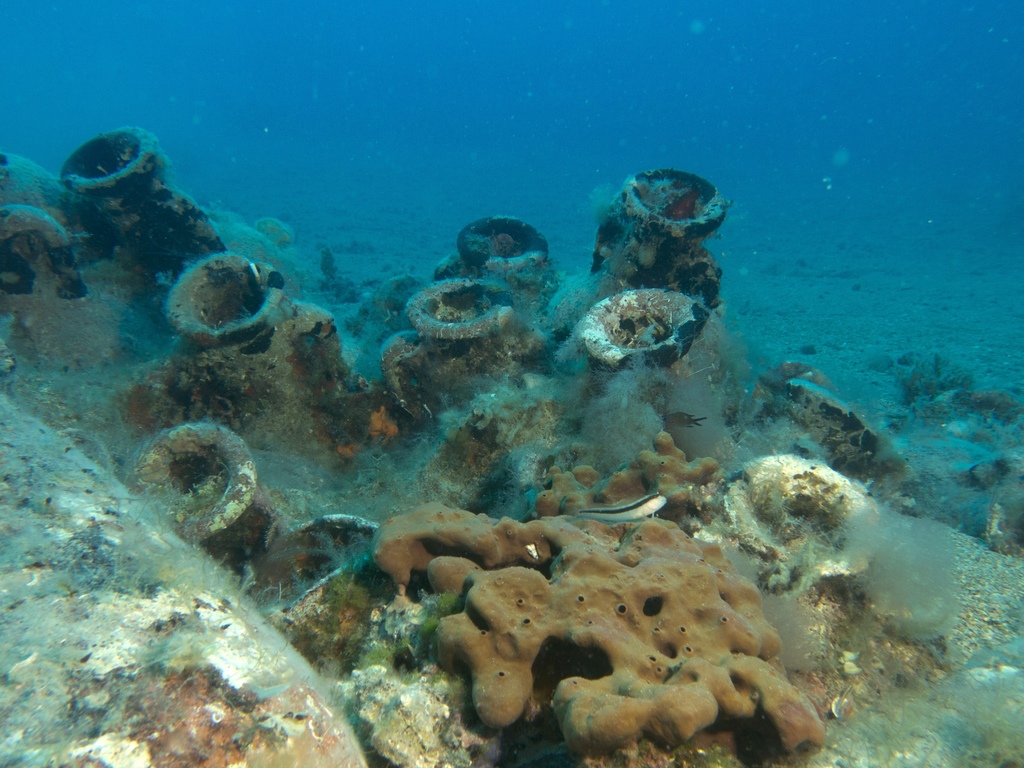 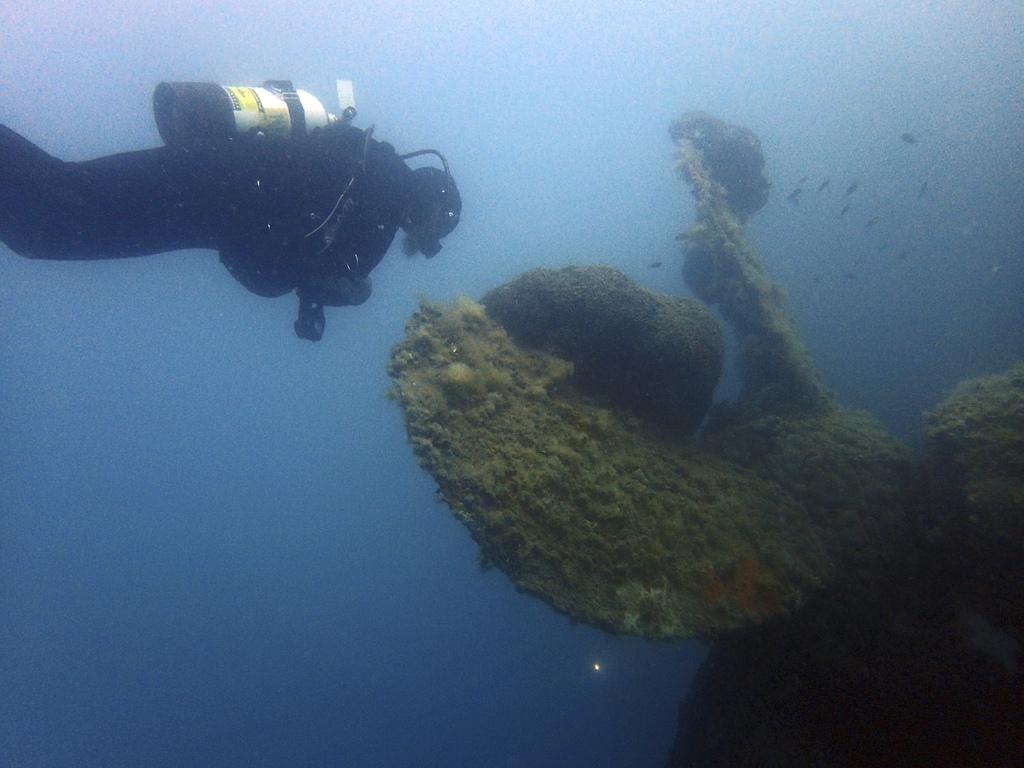 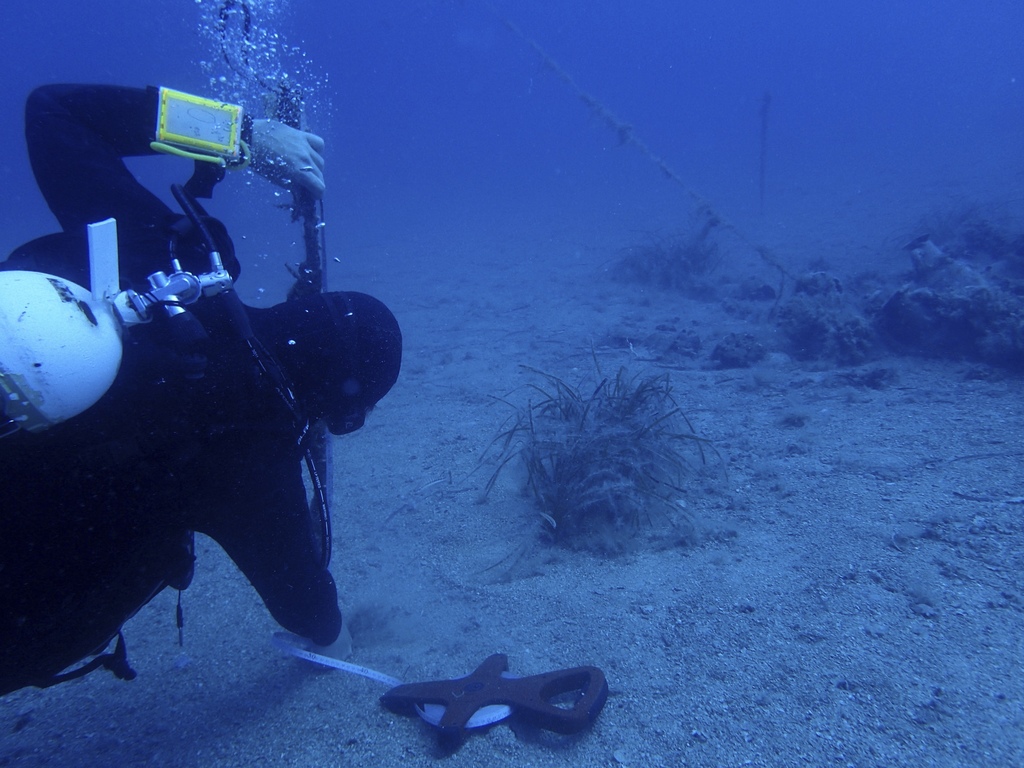 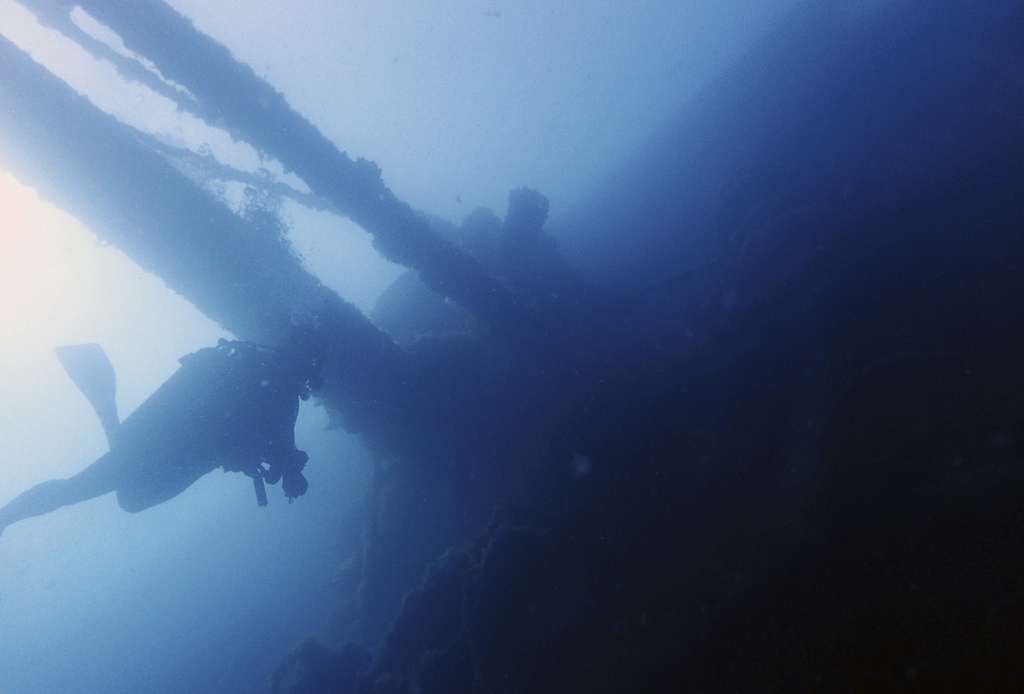 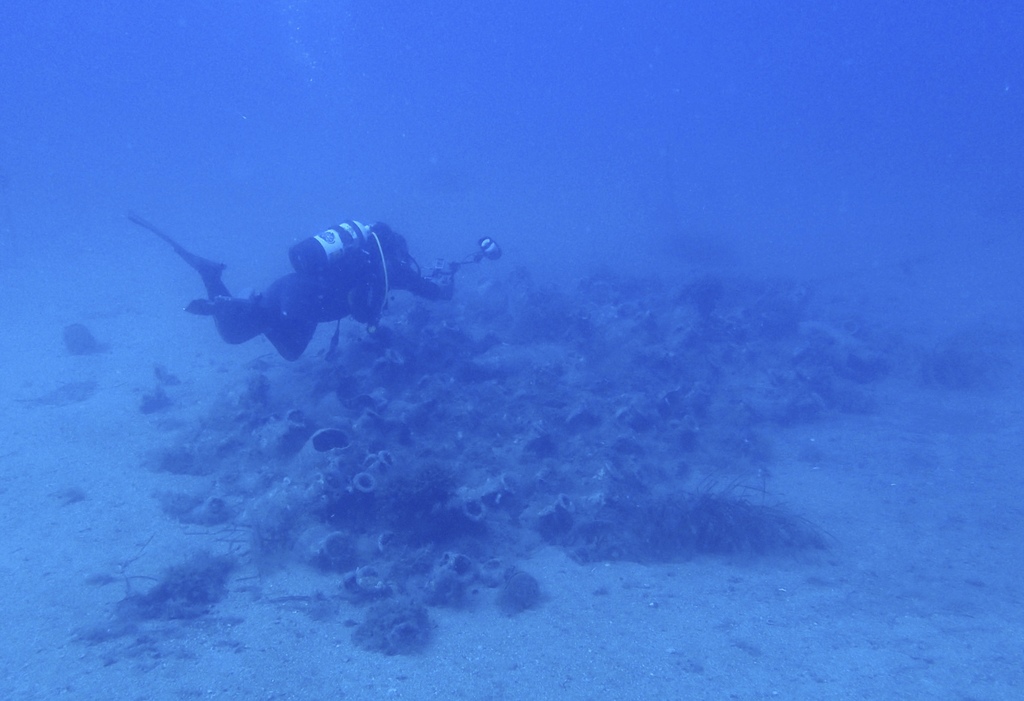 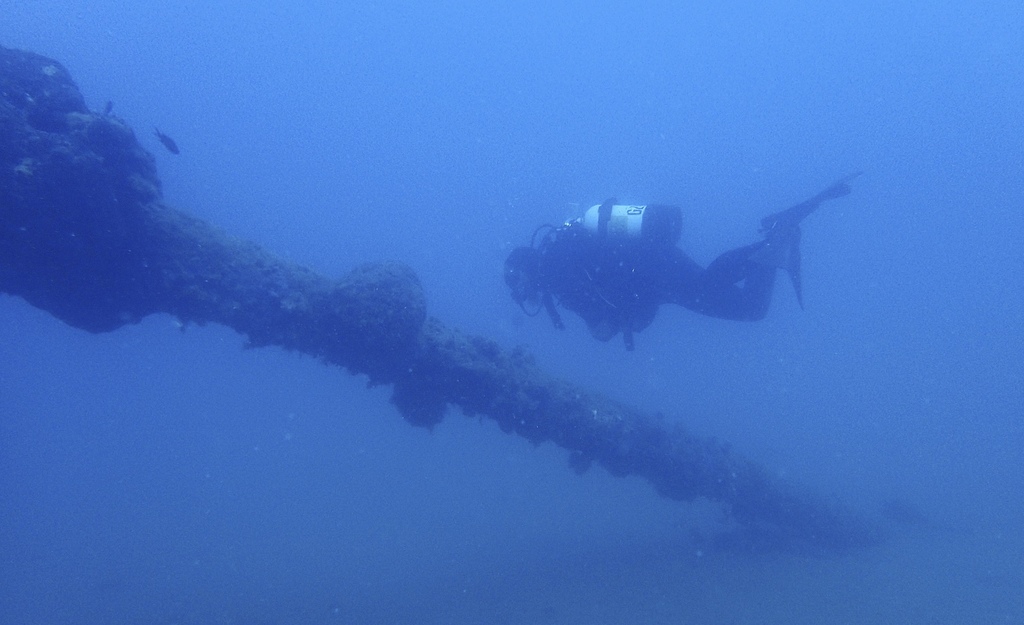 SARANDA, Albania (AP) — Descending beneath the waves, the cloudy first few meters quickly give way to clear waters and an astonishing sight — dozens, perhaps hundreds, of tightly packed ancient vases lie on the seabed, testament to some long-forgotten trader's unfortunate voyage more than 1,600 years ago.

A short boat ride away, the hulking frame of an Italian World War II ship appears through the gloom, soldiers' personal items still scattered in the interior, its encrusted railings and propeller now home to growing colonies of fish and sponges.

Off the rugged shores of Albania, one of the world's least explored underwater coastlines, lies a wealth of treasures: ancient amphorae — long, narrow terracotta vessels — that carried olive oil and wine along trade routes between north Africa and the Roman Empire, wrecks with hidden tales of heroism and treachery from two world wars, and spectacular rock formations and marine life.

"From what I've seen so far, you can't swim more than a few meters without finding something that's amazing, whether it's on the cultural history side or the natural history side, here in Albania," said Derek Smith, a coastal and maritime ecologist and research associate who has been working with the non-profit RPM Nautical Foundation to explore the Albanian coastline for the past decade.

Now Albania's National Coastline Agency is examining how best to study and protect its sunken attractions while opening them up to visitors in a nation that is virgin territory for the lucrative scuba diving industry.

"The idea of presenting the Albanian underwater heritage is a new idea for the country, because so far there is very little known about the rich history of the Albanian coastline, and in particular the shipwrecks," said agency head Auron Tare, who has been involved for the past 12 years with RPM Nautical Foundation's underwater research. "I believe the time has come now that we should present to the world the wealth of this heritage that we have in our waters."

Once more isolated than even North Korea, Albania has gradually opened up to international tourism and shrugged off its former image as a hermit state that briefly turned into lawless bandit territory in the late 1990s. But coastal land development has been burgeoning in an often anarchic fashion, and there are fears the more accessible wrecks could be plundered unless adequate protections are put into place.

Legislation is expected to be passed soon to protect the country's underwater heritage while also granting some access to visitors.

Neighboring Greece, to Albania's south, has struggled with balancing tourism with protecting its ancient artefacts. Greece was so fearful of losing its underwater antiquities it banned diving outright in all but a handful of places. Even today, diving is forbidden on any wreck — ship or plane — built more than 50 years ago, regardless of when it sank.

Albania is going for a more balanced approach.

"I'd say that in the near future the ancient wrecks should be open to scholars and research," said Tare, who noted the country has also lost some of its underwater heritage to plundering in the last 20 years. "Where(as) some of the modern wrecks which do not have much to lose in the sense of looting might be opened up to the dive industry."

He estimated that with access to the more modern wrecks from WWI or WWII, diving could pick up in Albania in the next five years.

The RPM Nautical Foundation, in cooperation with the coastal agency, has mapped out the seabed along about a third of the Albanian coastline, from Saranda near the Greek border to Vlora. Using a combination of divers and high-tech equipment including sonar and a remotely operated underwater vehicle, or ROV, its research vessel has discovered nearly 40 shipwrecks.

"So far RPM has documented from about 3rd and 4th century BC through to World War I and World War II contemporary shipwrecks," said Smith. "So we've got quite a big range of maybe 2,500 years, 2,300 years' worth of cultural resources here on the Albanian coastline that have really largely been unexplored."

One of them is the tightly-packed amphora pile near the shore. Known as the Joni wreck, it was a merchant vessel estimated to have had about four crew members and a cargo of mainly of north African amphorae.

The fact that the pottery was north African "is really important because it shows the trade connections between the Adriatic and the north African coast," said underwater archaeologist Mateusz Polakowski, who has been working with RPM.

Small fish peer out from the necks of the jugs, which the passage of time has concreted into the seabed. The site hasn't been excavated and archaeologists believe several more layers of amphorae, as well as the wooden hull of the ship, might still lie intact beneath the seabed.

"A lot of these wrecks are very important as national heritage treasures," said Polakowski. "Just as much as the biology of it is, just as important as the reefs and the fish populations are, I think these shipwrecks not only become artificial reefs, but they also instill a sense of cultural identity, cultural heritage."

Albania sits at a strategic point at the entrance of the Adriatic Sea and along ancient trade routes from Italy to the Balkan peninsula, Polakowski said. Much more remains to be explored.

"They have about 200 miles of coastline here," said Smith, the maritime ecologist. "Even though we feel like we've covered a tremendous amount of it ... there's always more to be discovered."