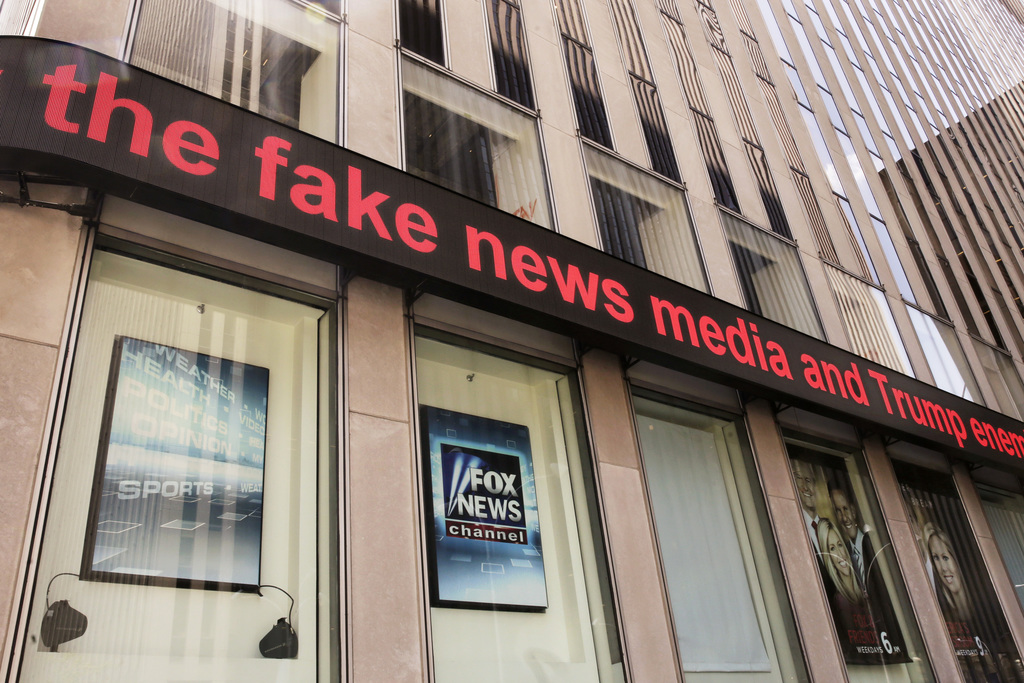 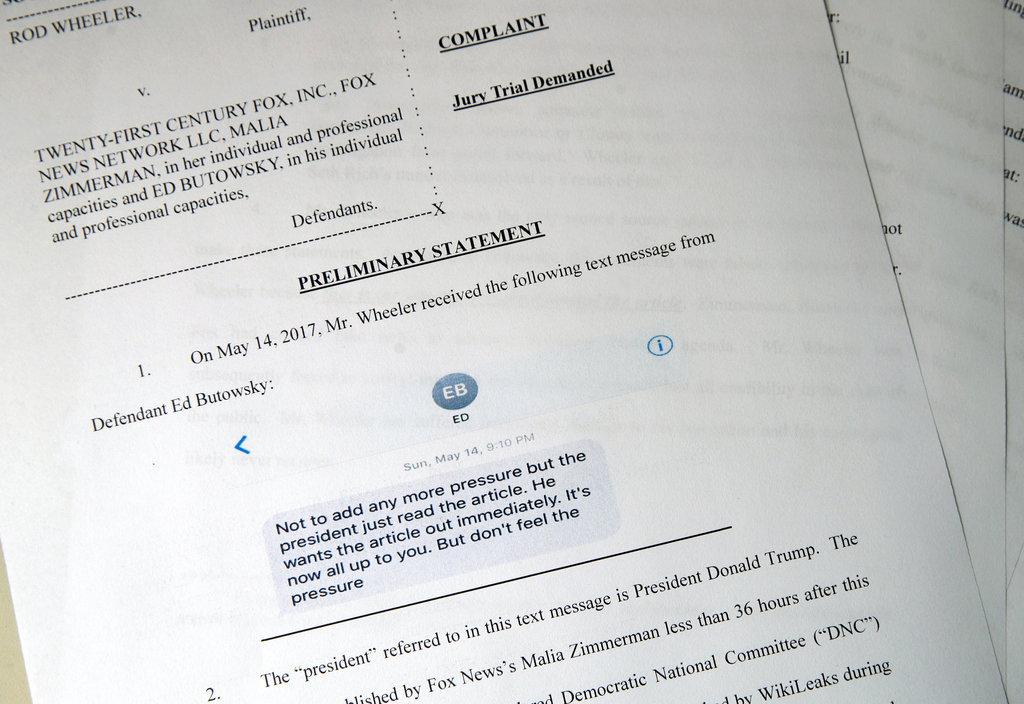 NEW YORK (AP) — A new lawsuit lays out an explosive tale of Trump allies, the White House and Fox News Channel conspiring to push a false story about Democratic leaks and an unsolved killing in order to distract attention from the Russia investigation that has been swirling around the president

The lawsuit was filed Tuesday against Fox by an investigator who had been looking into the killing of Seth Rich, a former Democratic National Committee staff member who died in 2016 in what police say was a botched robbery. The investigator alleges that Fox quoted him as saying things he never said and was willing to show President Donald Trump its story before it was posted online.

It's the second time in two days that Trump has been accused of being actively involved in pushing a public narrative to lower the heat of the Russia story. The Washington Post reported that the president had written a misleading statement for his son to give to The New York Times about Donald Trump Jr.'s meeting last summer with a Russian who promised dirt on Democrat Hillary Clinton's presidential campaign.

Rich's death has become fodder for conspiracy theorists, deeply angering the 27-year-old's family. In May, the story was thrust into the headlines again when Fox posted a story on its website in which investigator Rod Wheeler said there had been contact between Rich and WikiLeaks, the organization that posted a trove of DNC emails last year. The story was heavily promoted by Fox News host Sean Hannity, who has informally advised the president.

In the lawsuit, Wheeler now says that he never made that statement. He also contends he was told his false comments were put in the story because Trump wanted it that way.

Rich's family released a statement Tuesday night supporting the lawsuit. "While we can't speak to the evidence that you now have, we are hopeful that this brings an end to what has been the most emotionally difficult time in our lives and an end to conspiracy theories surrounding our beloved Seth," the family wrote.

Fox says it's "completely erroneous" to suggest it pushed the story to distract from the Russia investigation. Wheeler has made contradictory statements regarding the case and is simultaneously filing a racial discrimination lawsuit against the network, represented by a lawyer who has other lawsuits against Fox.

White House press secretary Sarah Huckabee Sanders said Trump had no knowledge of the false story before it was posted and that it was "completely untrue" that the White House had any role in shaping it.

Wheeler, a Fox contributor on law enforcement issues, said he was brought into the Rich case by donor and Trump supporter Ed Butowsky. He says Butowsky, who has also made occasional guest appearances on Fox News, was intent on establishing a link between Rich and WikiLeaks.

Two days before the Fox article was published, Wheeler said he got a text message from Butowsky: "Not to add any more pressure but the president just read the article. He wants the article out immediately. It's now all up to you. But don't feel the pressure."

Butowsky said in a phone interview Tuesday he has never met Trump and his text message to Wheeler about the president reading the article was "tongue-in-cheek."

Fox removed the story from its website a week after it was published, saying "it was not initially subjected to the high degree of editorial scrutiny we require for all of our reporting." Hannity ultimately backed away, saying he was acting out of respect for Rich's family.

Wheeler also said that he and Butowsky had met with outgoing White House press secretary Sean Spicer and showed Spicer notes on Wheeler's investigation. Spicer asked to be kept informed, the lawsuit said.

Spicer plays down the importance of that meeting.

"Ed is a longtime supporter of the president's agenda who often appears in the media," Spicer said Tuesday. "He asked for a 10-minute meeting, with no specified topic, to catch up and said he would be bringing along a contributor to Fox News. As Ed himself has noted, he has never met the president and the White House had nothing to do with his story."

On the day the Fox story was posted, Spicer was asked about the report that Rich had emailed WikiLeaks. He said, "I'm not aware of that" and did not mention that he had met with Butowsky and Wheeler a month earlier.

One of Trump's attorneys, Jay Sekulow, also devoted attention to the Rich story during several Hannity appearances in May, before his hiring by Trump was announced.

He said that while he hadn't seen "the files" on Rich, the incident "undercuts" the argument that Russians interfered in the election.

At the time, Trump was facing news stories about the investigations into Russian meddling in the 2016 campaign and possible ties between his campaign aides and Moscow. He continues to blast the inquiries as a "witch hunt" aimed at discrediting his election win and tries to focus attention on Clinton, who has largely faded from the headlines.

Jay Wallace, Fox News president, says, "The accusation that FoxNews.com published Malia Zimmerman's story to help detract from coverage of the Russia collusion issue is completely erroneous." Malia Zimmerman was a Fox producer on the story.

"The retraction of this story is still being investigated internally and we have no evidence that Rod Wheeler was misquoted by Zimmerman," Wallace said.

In May, Wheeler told Fox's local affiliate in Washington that he "absolutely" had sources at the FBI saying that there was information that could link Rich to WikiLeaks. But the station noted that Wheeler subsequently said contradictory things to other news organizations, and the station could not contact him again.

Fox News Channel's prime-time opinion hosts, particularly Hannity, make no secret of their admiration for Trump. But any charges that the network worked with Trump on a false story could harm the reputations of the network's journalists.

Trump has fostered an unusually close relationship with Fox and many of its personalities, particularly Hannity. Hannity gave Trump a frequent platform for non-challenging interviews during the campaign, along with advice on air and behind the scenes. The "Fox and Friends" morning show also is a Trump favorite.