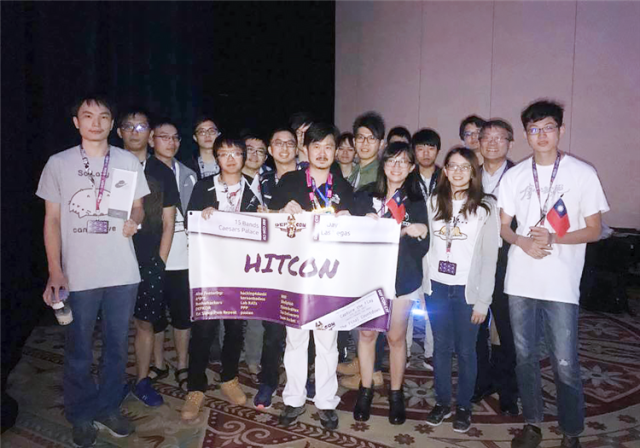 The strong performance of Hitcon continues Taiwan’s run of powerful showings at Defcon starting with second in 2014 and fourth in 2015 and 2016. It also reflects the team’s outstanding form this year as illustrated by top-spot placings at World Capture the Flag in Beijing and Boston Key Party CTF.

Hitcon manager Lee Lun-chuan praised the team’s performance and said it reflects the exceptional understanding of hardware and processor architecture present in the ranks of tertiary education talents in Taiwan. The public and private sectors should ramp up cultivation and recruitment efforts targeting such individuals, he added.

According to Lee, the format of this year’s Defcon presented fresh challenges for participants. The teams were required to protect their network services for defense points and probe those of opponents for attack points using new architecture provided by organizer Legitimate Business Syndicate, he said.

The result was also lauded July 31 by the Ministry of Economic Affairs, which said information security plays a key role in Republic of China (Taiwan) government efforts to promote the Internet of Things sector.

During her opening remarks at the Hitcon Pacific conference held last December in Taipei City, President Tsai Ing-wen said the government will continue investing in sectors relating to cybersecurity and work closely with the country’s cyber experts of today and tomorrow.

To this end, the MOEA Industrial Development Bureau is helping homegrown information security talents participate in international competitions and has co-organized since 2015 the annual Hitcon CTF championship and conference.

The online preliminary of the local event runs Nov. 4-6, with the 10 winning teams set to battle it out for the top prize of US$10,000 during the finals scheduled for Dec. 8-9 in Taipei.