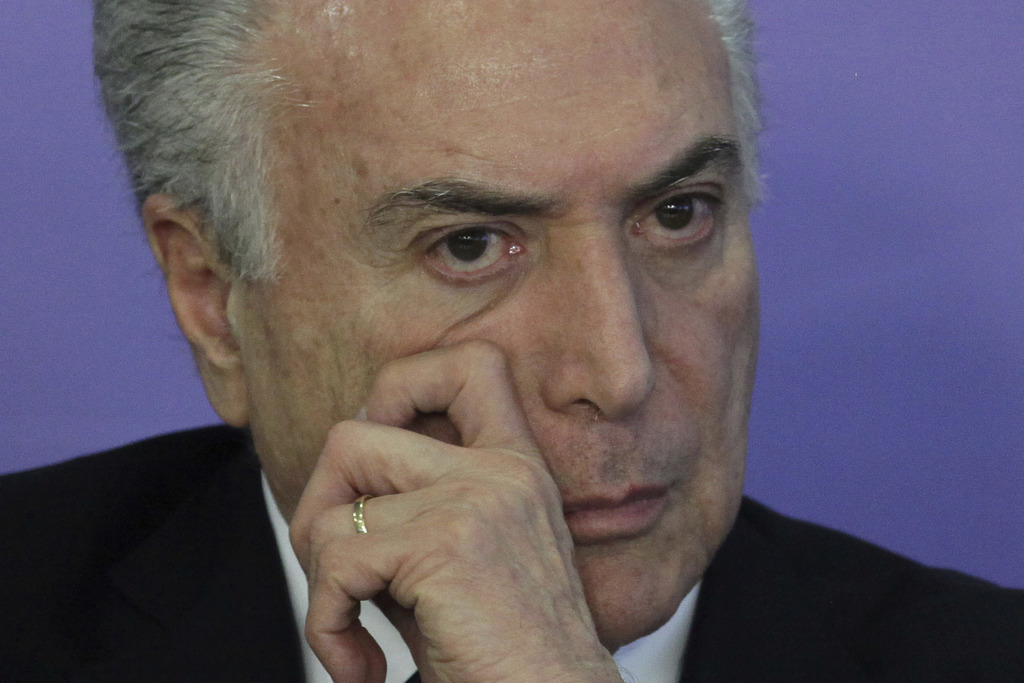 BRASILIA, Brazil (AP) — Brazil's lower chamber of Congress is set to vote Wednesday on whether to suspend President Michel Temer and allow the country's top court to put him on trial for bribery. The key decision comes amid a rocky year for Temer's administration and the result could have deep implications for Latin America's largest nation in the year ahead.

Here's a look at how Brazil got here and what to expect:

Temer was charged with bribery by Attorney General Rodrigo Janot in June for allegedly orchestrating a scheme to pocket much of about $12 million in illicit payments from meat-packing company JBS in exchange for government help on a business deal. Rodrigo Rocha Loures, a former Temer aide, was caught on camera being arrested leaving a Sao Paulo pizzeria with about $150,000 in cash that was allegedly bribe money. Temer denies the allegation and says there is no proof he received any money.

It's the first time a sitting president has been charged with corruption in Brazil. Temer is one of many politicians ensnared in a colossal three-year probe into kickbacks that has led to the jailing of many of the country's elite.

WHY A CONGRESSIONAL VOTE?

Federal lawmakers can only be investigated, charged or tried with the approval of the Supreme Federal Tribunal, the country's highest court. While the court did accept the charge against Temer, there is an added step because the case involves a sitting president — the vote in the Chamber of Deputies. In Brazil's constitution, the Chamber of Deputies is designated as the voice of the people and for something as serious as trying a sitting president, average Brazilians are supposed to be able to weigh in via their representatives.

For Temer to be suspended, two-thirds of the 513 members of the Chamber of Deputies, or 342, would have to vote against him. If that threshold should be reached, Temer would be suspended for up to 180 days while the Supreme Federal Tribunal put him on trial. A conviction would carry two to 12 years in prison. In the interim, Chamber of Deputies Speaker Rodrigo Maia, a Temer ally, would be president.

If the threshold is not reached, the charge against Temer would be suspended and he would continue with the rest of his term, which ends Dec. 31, 2018. However, prosecutors could decide to try him on the charge once he left office.

Maia and other allies of Temer say the president will win the vote by an ample margin, by some counts as many as 50 more "nays" than necessary for him to survive. While Temer is deeply unpopular among average Brazilians — a poll last week put his approval rating at 5 percent — he is known for his ability to wheel and deal behind the scenes with other legislators.

The 76-year-old president has not been taking any chances: His administration has been frantically promising hundreds of millions of dollars in pork for the districts of many lawmakers in exchange for their support.

Despite Temer's confidence that he can stay in power, he is facing two large risks.

First, he is so unpopular that many deputies could decide that being associated with him would put their own political futures at risk. All 513 seats are up for election next year, and Brazilians are already furious at politicians and the seemingly endless stream of corruption scandals. The voting will be televised nationwide by Globo, one of Latin America's largest conglomerates that reaches the vast majority of Brazilian households.

Second, the attorney general is expected to come forward in the next few weeks with a second charge against Temer, alleging obstruction of justice. In March, Temer was recorded by a former JBS executive of apparently endorsing the continuation of hush money to former Speaker Eduardo Cunha, serving a 15-year sentence for corruption. Temer denies wrongdoing. A second charge would spark a second vote, forcing deputies to once more weigh whether to continue being associated with the troubled leader.