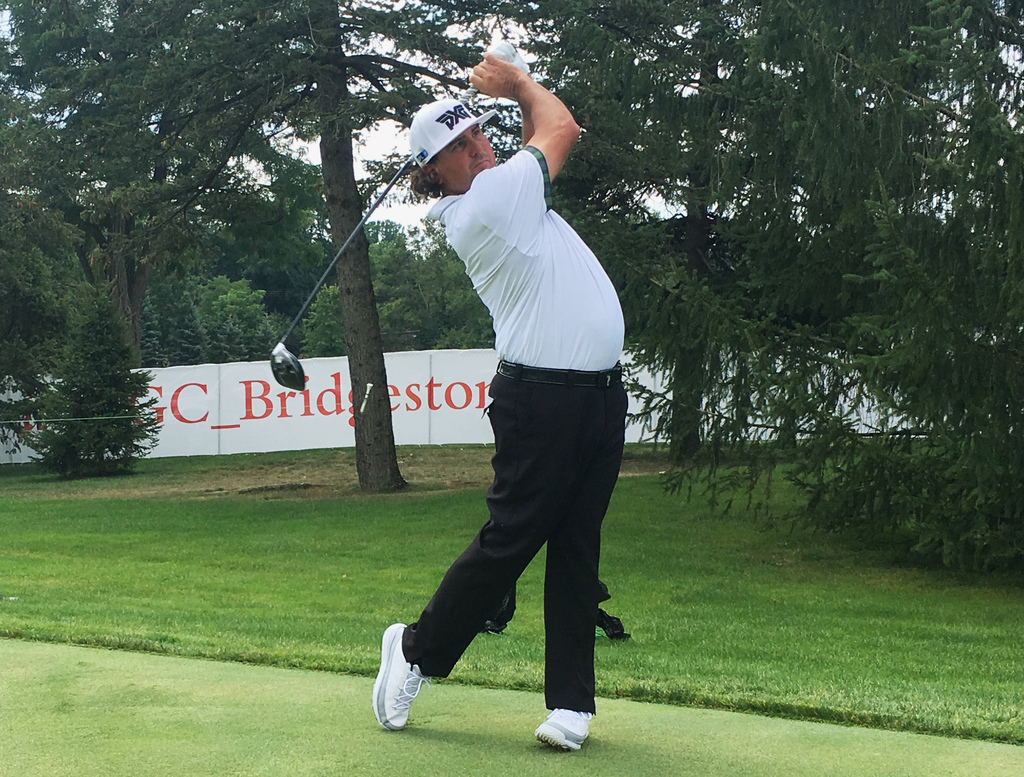 AKRON, Ohio (AP) — Pat Perez is in his 16th season on the PGA Tour and finally feeling like he's in the big leagues.

For the first time in his career, Perez is eligible for all four majors and the four World Golf Championships. And at No. 11 in the FedEx Cup with three weeks before the playoffs begin, he is on track to make it to East Lake for the Tour Championship for the first time.

At age 41, one year removed from shoulder surgery that he feared might end his career, the grass has never looked greener.

"I can't even describe it," Perez said. "The likelihood of me being in this tournament? I was No. 334 in the world. To have the year I've had, it's just amazing."

He wasn't sure which club to hit off the 10th tee at Firestone during a practice round Tuesday because his one and only appearance in this World Golf Championship was in 2009, the year Tiger Woods set a PGA Tour record by winning for the seventh time on the same course. Perez finished 12 shots behind.

Perez and Woods go way back, and it involves more than some fiery (and accurate) comments he made about Woods on his radio show earlier this year.

He beat Woods by eight shots in winning the 1993 Junior World Championship at Torrey Pines. Later that year, Perez won the Junior PGA Championship at Pinehurst No. 4 with a 72-hole score of 271, which remains the tournament record in the boys' division.

But it took Perez losing so much — mainly his health and an equipment contract — for him to realize he could have done so much more.

His left shoulder was in so much pain early in 2016 that his only option was surgery, a perilous prospect at that stage in his career. He slept on his couch for a month because it hurt to get in and out of bed. He wasn't planning to play again until 2017 rolled around.

And then he received a lifeline in the form of a sponsor's exemption from the CIMB Classic in Malaysia, which offered a short field, no cut and a $7 million purse. Perez finished in the middle of the pack, tied for seventh two weeks later in Las Vegas and then won the OHL Classic in Mexico in just his third tournament back.

Just like that, Perez went from wondering if his shoulder would allow him to play again to spending time in the company of the world's best players on the biggest stages.

"I think as a whole, I'm just so much more at ease with life," he said. "It's amazing when you grind, grind, grind forever and don't really have problems. And when it's taken away from you, I just had a whole different vision. I can have it all taken away. A shoulder can go out again. So I guess I'm putting everything into it."

Perez already has made over $3.5 million, nearly twice as much money as his best season.

He was never more giddy than when he received his official letter from the USGA in late May that he would be exempt into the U.S. Open because he was among the top 60 in the world (a career-best No. 40 for Perez). It was the first time he didn't have to go through qualifying.

"I might just go out to the qualifier to watch," he joked that day. "I might stand on the 18th green and read my letter to everyone coming off."

Perez has a brand of humor that smacks of bravado and rubs some the wrong way.

He has a radio show in which he praised Woods for being the needle that moves golf, and then offered a blunt assessment that Woods knows he can't beat anyone right now and that if Woods didn't play the Masters, he wouldn't play the rest of the year.

Woods didn't play the Masters, had a fourth back surgery a few months later and is out the rest of the year. Even so, the criticism was so severe that Perez abandoned social media. He said he recently sent Woods a text — they have known each other since they were teenagers — and Woods messaged him back. It was important to clear the air.

And now for the finishing kick.

"He wants to be part of this team in the worst way," said U.S. captain Steve Stricker, who played a practice round with Perez at Royal Birkdale. "He hasn't been playing as well of late as he did at the start of the year, but there's four events left. He's on our radar, for sure. He didn't play or earn any points last year, so he's done this all in one year's time."

Even if he doesn't make it, Perez feels has made his point, with most of that motivation aimed at Callaway for dropping him last year when he was on the mend.

"It was more the fact everyone thought I couldn't come back and do it," he said. "And there was a little fear. I didn't want to lose my card. I came back and was mad, just mad enough to prove all these guys wrong."

One of golf's most temperamental characters, it might have been the first time he channeled his anger in the right way.