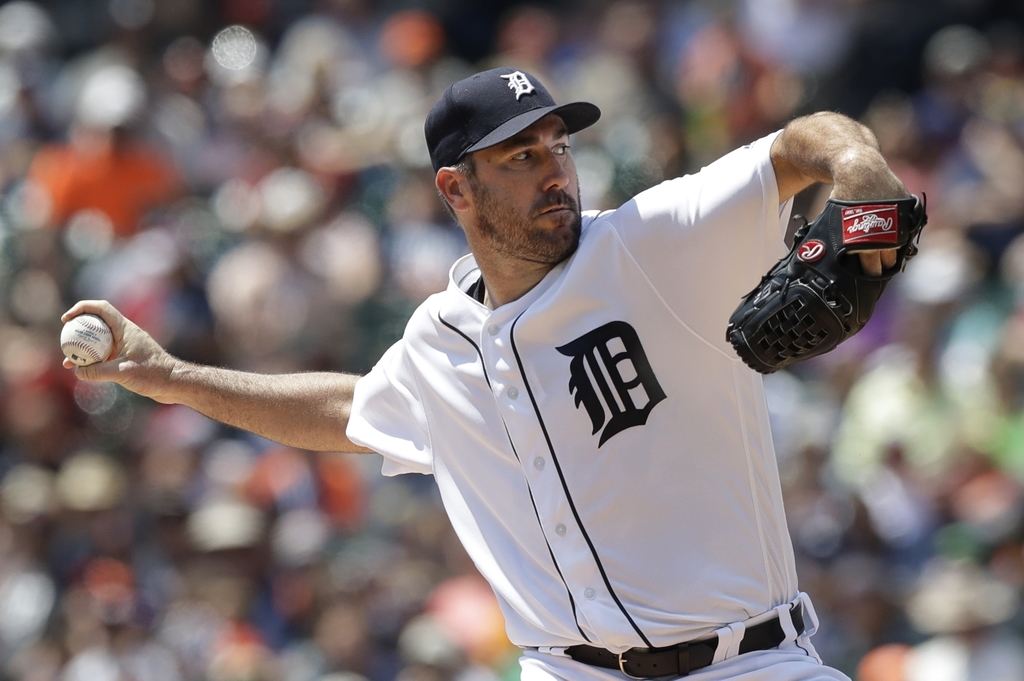 After all the speculation and uncertainty leading up to the trade deadline, Justin Verlander's sense of humor was apparently still intact.

"Source: I'm still in the Tigers locker room," said a message on Verlander's Twitter account Monday. There was even a picture of the right-hander offered as proof.

Verlander was indeed still a member of the Detroit Tigers when Monday's non-waiver trade deadline came and went. Although the Tigers dealt J.D. Martinez, Justin Wilson and Alex Avila in the last two weeks before the deadline, they kept some of their biggest names. Detroit remains with the only major league team Verlander's ever played for, and Ian Kinsler wasn't traded either.

"I do not have a mandate to dump salary," general manager Al Avila said.

The Tigers held onto Verlander and his big contract, instead dealing Martinez, Wilson and Avila in an effort to add some quality young position players to the organization. It's no surprise that Detroit parted ways with those three. Martinez and Avila can become free agents after this season, and Wilson — who became the closer in Detroit earlier this year — is probably worth more to a contending team than to the sub.-500 Tigers.

Detroit acquired minor league infielders Jeimer Candelario and Isaac Paredes from the Chicago Cubs in the trade for Wilson and Avila. The Tigers sent Martinez to Arizona on July 18 for minor leaguers Dawel Lugo, Sergio Alcantara and Jose King — all infielders as well.

Although Al Avila said the Tigers aren't simply shedding payroll, speculation will continue to swirl around some of their more expensive players. Justin Upton can opt out of his contract after this season, and the Tigers have a team option on Kinsler. Verlander's deal calls for him to be paid $28 million in both 2018 and 2019, and it includes a $22 million vesting option in 2020 that becomes guaranteed if he's in the top five of the 2019 Cy Young vote.

Detroit hasn't made the postseason since 2014, and the team is now clearly in a transition phase. Trading Verlander could certainly give the Tigers more financial flexibility over the next couple seasons, but it's not clear how much that would really make a difference.

The bigger issue is how quickly Detroit can reap the benefits of acquiring more prospects. Two years ago, the Tigers traded David Price and Yoenis Cespedes at the deadline, receiving pitchers Michael Fulmer, Daniel Norris and Matthew Boyd in return. Fulmer was the 2016 American League Rookie of the Year, while Norris and Boyd have had their ups and downs.

That's often the case with younger players. They develop at different speeds, and it's hard to predict who will pan out. The 23-year-old Candelario plays third base, and Detroit's major league starter at that position, Nicholas Castellanos, is only 25.

Avila said he wasn't overly concerned about positional variety when bringing in prospects. At this point, the Tigers need good young players, no matter where they might fit in.

"If it happened to be two third basemen as opposed to let's say a third baseman and a shortstop, you still go for the best talent that you can acquire," the general manager said. "No different than what we do in the draft. Later on, if you had to fill in a gap here and there, then you go out and get a minor league free agent. So really, this has nothing to do with Nick Castellanos or anybody on the major league club. This has to do with refilling our organization with prospects at the minor league level."