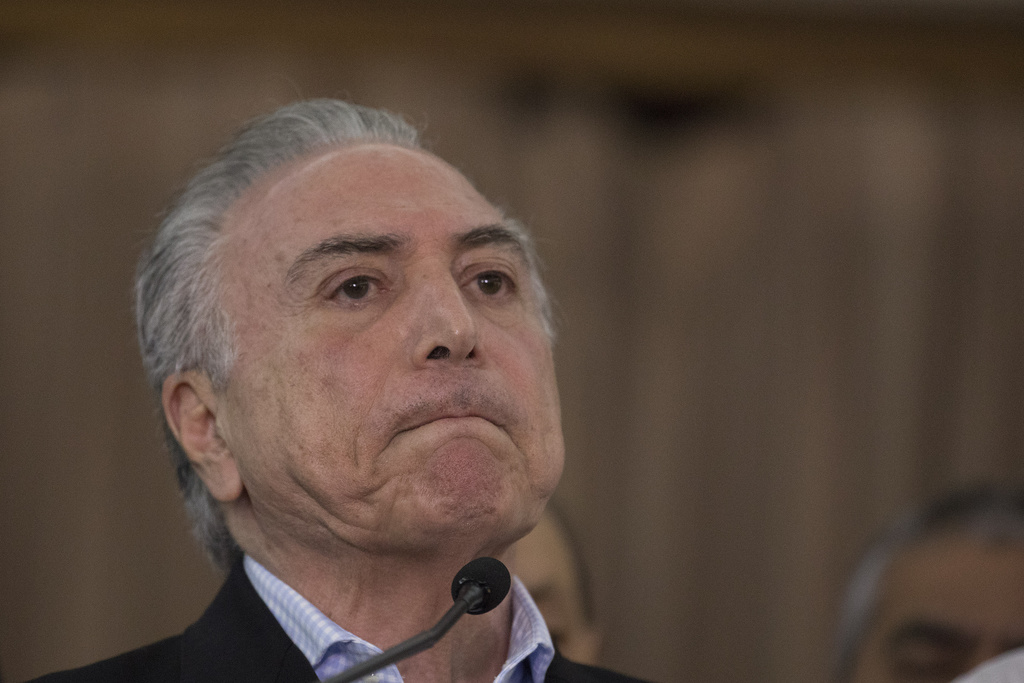 SAO PAULO (AP) — For Brazilian leaders, August is the cruelest month — and one that now presents a potentially fatal challenge to the presidency of Michel Temer.

In modern times, August has been a devastating month for Brazilian presidents, 31 days in which they have been impeached or resigned. One even committed suicide. Temer's own predecessor, President Dilma Rousseff, was removed last Aug. 31 for breaking fiscal rules in her management of the budget.

Temer is facing his own August showdown — a vote in Congress' lower house Wednesday on whether he should be suspended and put on trial over a bribery charge filed against him by Brazil's attorney general.

Opposition lawmakers feel confident about adding Temer to the list of August casualties, either this week with the bribery charge vote or in a likely obstruction of justice accusation that Attorney General Rodrigo Janot could bring before the end of the month. The latter would bring its own vote by the Chamber of Deputies.

"Even if he wins now (Wednesday) it won't be over," said Claudio Couto, a political science professor at Fundacao Getulio Vargas, a Sao Paulo-based university and think tank.

Couto said Temer has been using much of his political capital to curry support ahead of Wednesday's vote, including the promising of billions of dollars in earmarked appropriations for many legislators at a time the country is struggling to emerge from its worst recession in decades.

Temer is accused of receiving bribes indirectly, via a confidant who was caught by police carrying a suitcase with about $150,000 in cash. The case erupted in May when a recording emerged in which Temer apparently tells a meat-packing company executive to keep up paying of hush money to former Chamber of Deputies Speaker Eduardo Cunha, who is serving a 15-year sentence for corruption.

Temer has denied wrongdoing and he adamantly rejected calls for him to resign from across the political spectrum.

Until a few weeks ago, the president appeared to have an ample margin of support among the 513 members of the Chamber of Deputies.

Chamber Speaker Rodrigo Maia, an ally of the president, has said that for much of July, he was confident that Temer would have "a comfortable win" in the vote by the house, where the governing coalition has remained strong enough on some issues to pass legislation. But as August approached, news got worse for the president. Last week, an Ibope institute opinion poll said just 5 percent of Brazilians surveyed approved of Temer.

Adding to the pressure, the vote of every deputy will be public. The member will have to step up to the microphone and say "yes" or "no" on suspending Temer. That could prove risky for the highly unpopular leader because Globo, a dominant TV network across Brazil, has pledged to show the voting live no matter how long it lasts.

The opposition hopes that the prospect of having to support Temer in public might change minds at the last minute, particularly since all members of the chamber are up for re-election next year.

If two-thirds of the lawmakers should vote against Temer, he would be suspended for up to 180 days while a trial was conducted by the Supreme Federal Tribunal, the country's highest court. A conviction by the court could bring a prison sentence from two to 12 years. In that event, Maia would serve out the presidential term, which ends Dec. 31, 2018.

If two-thirds of deputies voted against suspending Temer, the bribery charge would be suspended.

The pattern of grim Augusts for Brazilian leaders goes back to President Getulio Vargas. A populist dictator between 1930 and 1945, he was elected president in 1951 much to the dismay of his adversaries, throwing the country into political crisis. The nation's generals demanded his resignation. Vargas ended up shooting himself in the chest on Aug. 24 in the presidential palace that was still in Rio de Janeiro.

A decade later, Janio Quadros won the presidency by a landslide, and then shocked Brazilians with his Aug. 25 resignation over the country's stance on the Cold War.

President Juscelino Kubitschek, expected to lead Brazil from its then dictatorship, died on Aug. 22, 1976, in an apparent traffic accident that is still viewed with suspicion to this day.

On Aug. 26, 1992, a Chamber of Deputies committee recommended that President Fernando Collor de Mello be impeached. He resigned a few months later.

Oliver Stuenkel, who teaches international relations at the Fundacao Getulio Vargas university, estimates there is 50-50 chance that Temer's administration will end despite the president's apparent advantage.

"We all know the August tradition. It is a long month and a lot more can happen," Stuenkel said. "If there is a second accusation, the risk for him will be substantially bigger."