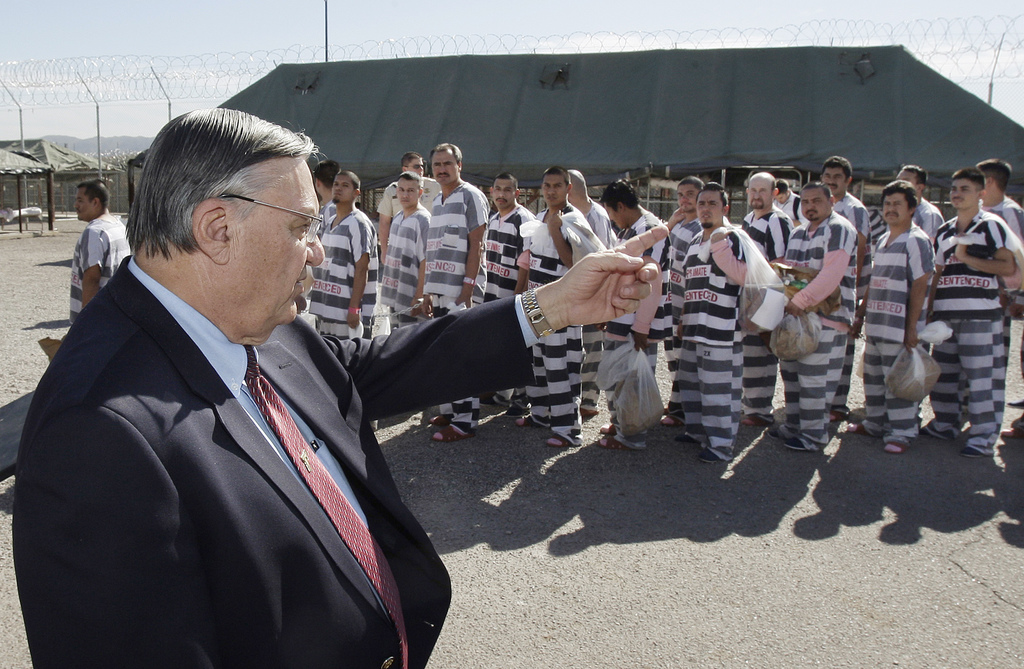 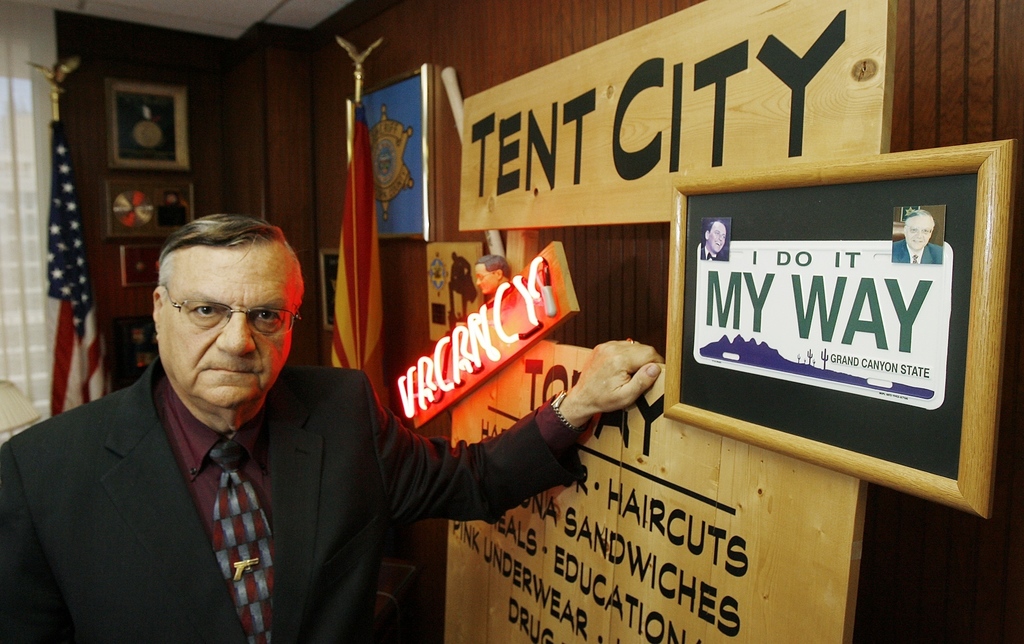 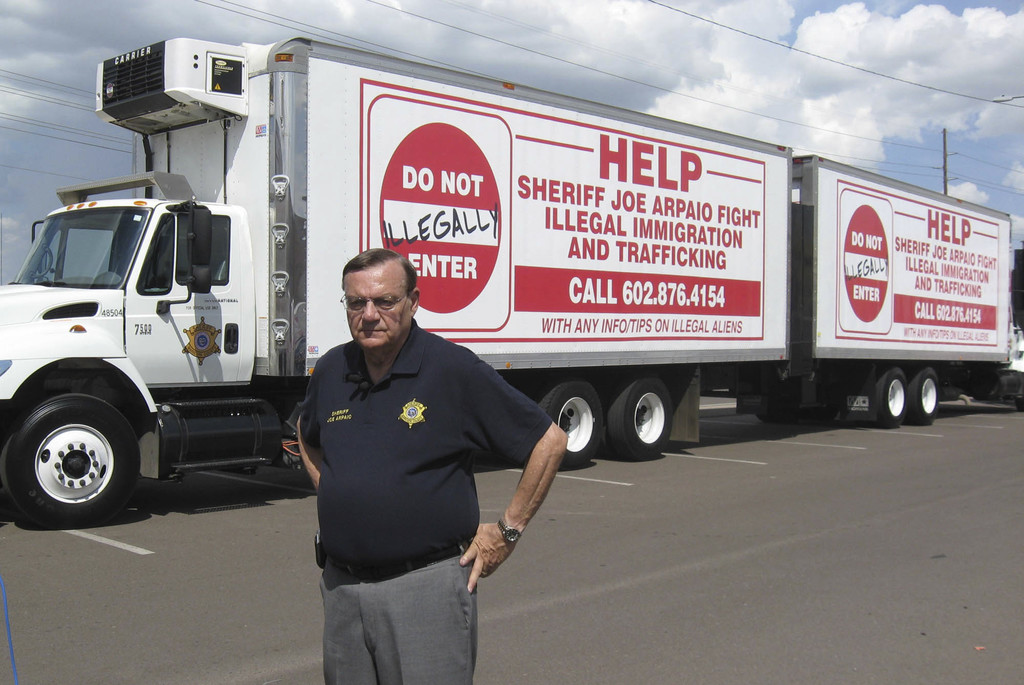 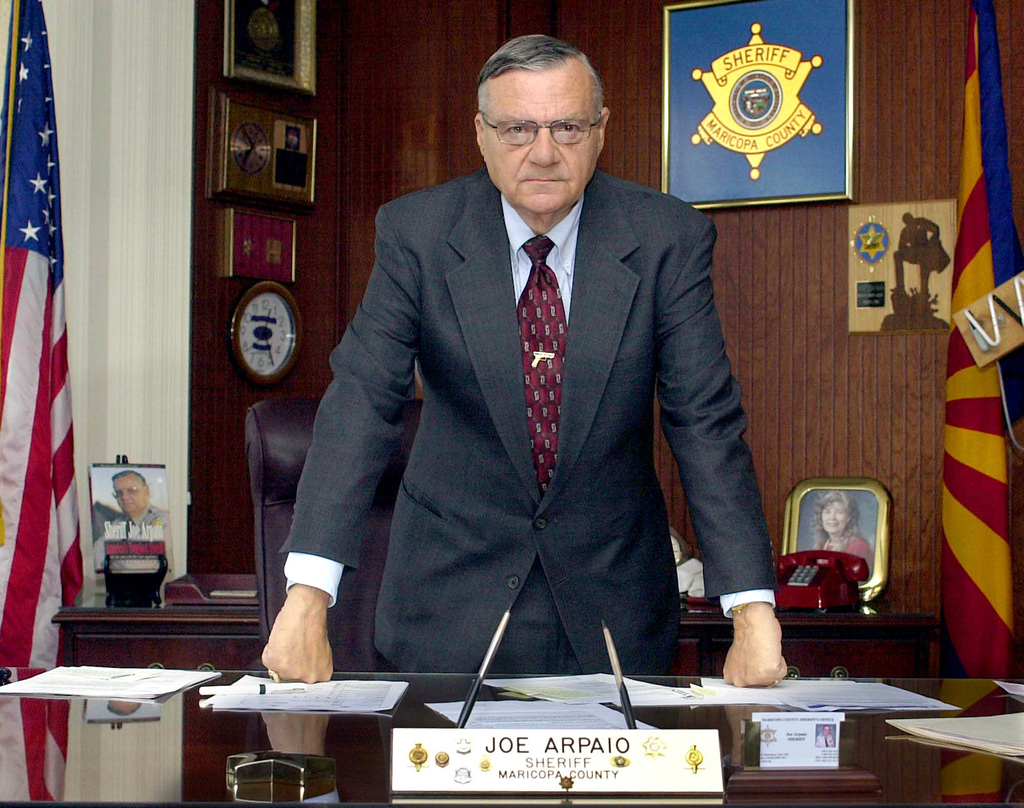 PHOENIX (AP) — Former Sheriff Joe Arpaio has been convicted of a misdemeanor for refusing to heed a judge's order to stop traffic patrols that targeted immigrants. His 24 years as sheriff of metro Phoenix were defined by a series of tough-on-crime tactics and legal problems that cost the area millions of dollars.

Arpaio won points with voters for making jail inmates wear pink underwear and housing them in canvas tents during Phoenix's triple-digit summer heat. His get-tough approach proved popular with voters who believed jail was supposed to be difficult, but it led to lawsuits.

He opened the Tent City jail complex in 1993 to ease overcrowding. But it was criticized for serving as a media promotion tool for Arpaio and contributing to a culture of cruelty within the jails.

He also said his office started dyeing the jail-issued underwear in the 1990s as a way to discourage inmates from taking home the undergarments after they were released from custody. Critics say the change in underwear colors was intended to humiliate men serving time.

Arpaio's successor, Sheriff Paul Penzone, is in the process of closing Tent City and phasing out pink underwear.

Arpaio spent nine of his 24 years in office enforcing federal immigration law. Unlike other local police leaders who left it to U.S. authorities, Arpaio made hundreds of arrests in traffic patrols that sought out immigrants and business raids in which his officers targeted immigrants who used fraudulent IDs to get jobs.

His immigration powers were eventually stripped away by the courts and federal government, culminating with a judge ruling in 2013 that Arpaio's officers racially profiled Latinos.

His refusal to stop his immigration patrols ultimately led to a criminal case that contributed significantly to his re-election loss late last year.

Arpaio was accused at various points in his career of retaliating against political enemies.

He was dogged for years by claims that he launched investigations of judges, politicians and others who were at odds with him in political and legal disputes.

His office arrested two county officials and a judge on corruption charges that quickly collapsed in court. Maricopa County agreed to pay $8.7 million to settle lawsuits by people who said they were investigated on trumped-up allegations. Arpaio contended he was trying to root out corruption in county government.

He was later accused of investigating the judge who presided over a racial profiling case against the sheriff's office and whose order Arpaio ignored, leading to his conviction. The sheriff vigorously denied the allegation.

Arpaio's reputation for being tough on crime was undermined by his failure to adequately investigate more than 400 sex-crimes cases, including dozens of child molestation reports, over a three-year period ending in 2007.

The sheriff offered a qualified apology in December 2011 for the bungled cases, and his office has since said it moved to clear up the cases and took steps to prevent the problem from happening again.

Officials agreed in 2015 to pay $3.5 million to settle a lawsuit that alleged Arpaio botched the investigation into the rape of a 13-year-old girl and failed to arrest the suspect who then went on to attack her again.

Maricopa County spent $141 million defending Arpaio against lawsuits. That includes $54 million in the racial profiling case alone and $82 million in judgments, settlements and legal fees for the sheriff's office, covering issues such as lawsuits over deaths in his jails and the lawman's failed investigations of political enemies.

For much of his career, the taxpayer costs didn't diminish Arpaio's popularity enough to drive him out of office.