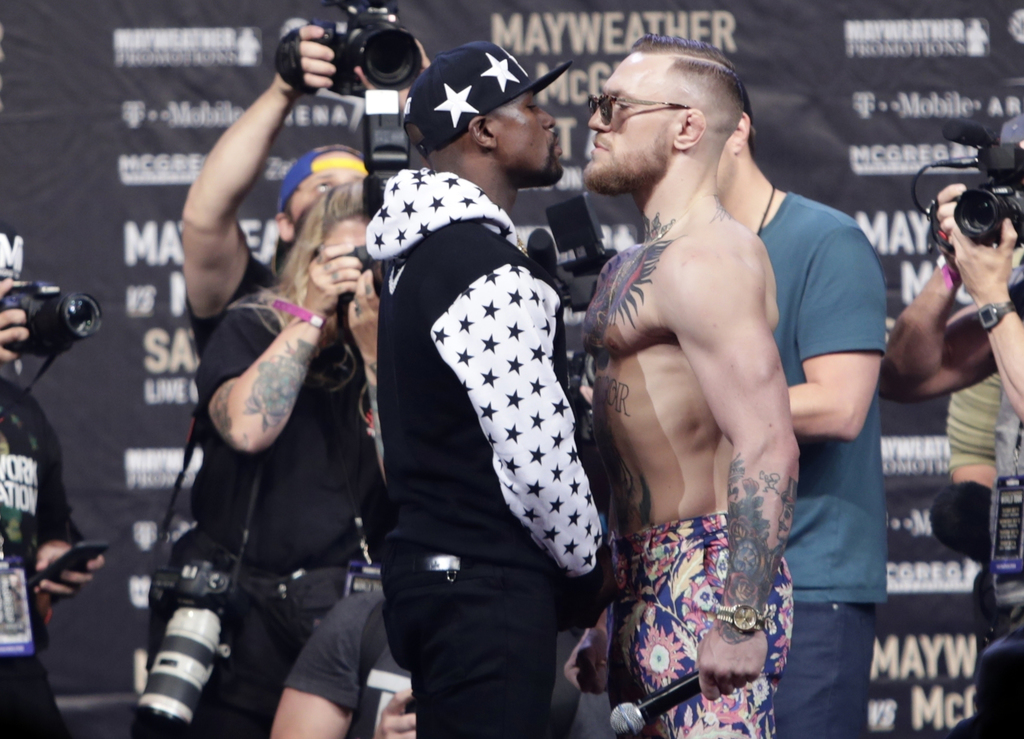 LAS VEGAS (AP) — There's a reason tons of good seats remain for what was supposed to be the year's hottest ticket.

Actually, there are two reasons the hype bubble surrounding the fight between Floyd Mayweather Jr. and Conor McGregor has been punctured, at least a bit.

In their quest to extract every dollar possible, promoters wildly miscalculated their audience. This isn't boxing, with an established wealthy fan base willing to pay thousands of dollars as they did for Mayweather's 2015 fight with Manny Pacquiao.

The 20-something UFC fans that are driving this promotion for the most part don't have 10 grand to blow on a pair of seats. They'll have to be content to sit in front of the television with a few friends, cheering on McGregor from the couch instead of inside the arena.

The other reason might be that the con job that is Mayweather and McGregor has been exposed. And, in a revealing twist, it was done by the fighters themselves.

The drama has already played out, almost before it really got started. The act is tired, as anyone who saw the media tour or watched the first "All Access" episode on Showtime can attest.

See Floyd play with his money. Watch Conor model fur coats and boast that his net worth will quadruple.

Listen as they scream profanities at each other, then try not to laugh at the inside joke they share as they face off for photographers.

It's all a big tease, a fantasyland built on dreams and hopes. It's as phony as the $100 million check that Mayweather likes to wave around when the truth is he can't even afford to pay his taxes without selling some of his assets.

That's enough to sell it to home viewers at $99.95 apiece. It's entertainment, much like Wrestlemania, and a good excuse to get a few friends together for a party.

The bottom line is that there's no there there. This is more reality show than fight, and the reality is that it's such an awful mismatch that Nevada boxing regulators should be ashamed of themselves for even sanctioning it.

But Mayweather is starved for cash, and doesn't mind making a fool of himself to replenish his bank account. The boxer who likes to wear hats proclaiming himself "TBE'" (The Best Ever) is so desperate to sell this fight that he's promoting it by suggesting he's not that good anymore.

"That's what makes this fight so entertaining," Mayweather said on the All Access show. "I'm not the Mayweather of the past."

He's right, because the Mayweather of the past was at least mildly interesting. But the money act is as dated as the check from the Pacquiao fight that Mayweather seems to have trouble cashing.

Gone are the days when he and 50 Cent used to toss around stacks of bills, then head out in the Bugatti to the strip clubs to throw dollar bills at dancers. The Big Boy mansion doesn't seem so big anymore, and there are only so many times you can watch Mayweather sitting in his private jet.

The same holds true for McGregor. His fur coats seem nice enough — though it's hard to be sure the one he wore at the media tour stop in New York was really made of polar bear — and he's thrown out a few genuinely funny lines.

But it mostly feels forced, like the UFC star has been rehearsing too long. Yes, it's easy to mock Mayweather for allegedly not being able to read, but 50 Cent delivered the same material years ago after he and Mayweather had a nasty split.

Indeed, by the time the tour hit New York the trash talk was stale. Aside from the F-bombs thrown out like red meat to the eager crowd, there wasn't anything that screamed "Buy me!" about the fight.

And to think there are three more All Access episodes remaining. That's about three too many for this one-trick pony.

Still, the bottom line is that McGregor's true believers really believe. They're putting money on their man despite the fact he has no chance — other than something truly bizarre happening — inside the ring. They may not be able to afford seats in the arena but they will buy the pay-per-view in numbers that rival the 4.6 million sold for Mayweather-Pacquiao.

Expanding that outside the core of fans driving this fight will be more difficult, though, as shown by the resistance to the insanely inflated ticket prices.

Proof, perhaps, that even a freak show is worth only so much.