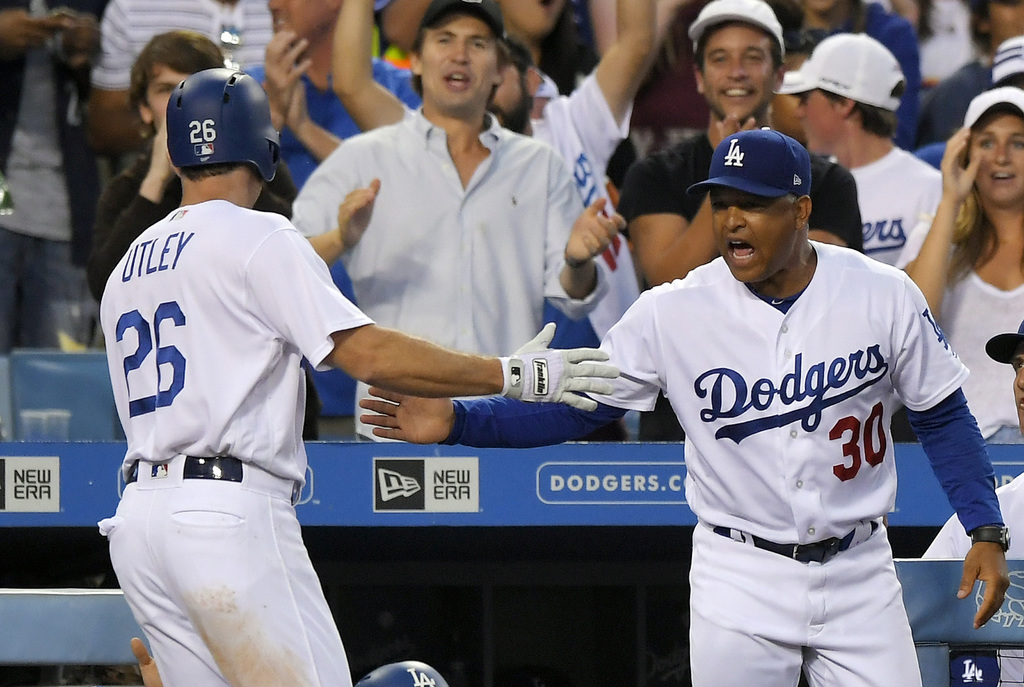 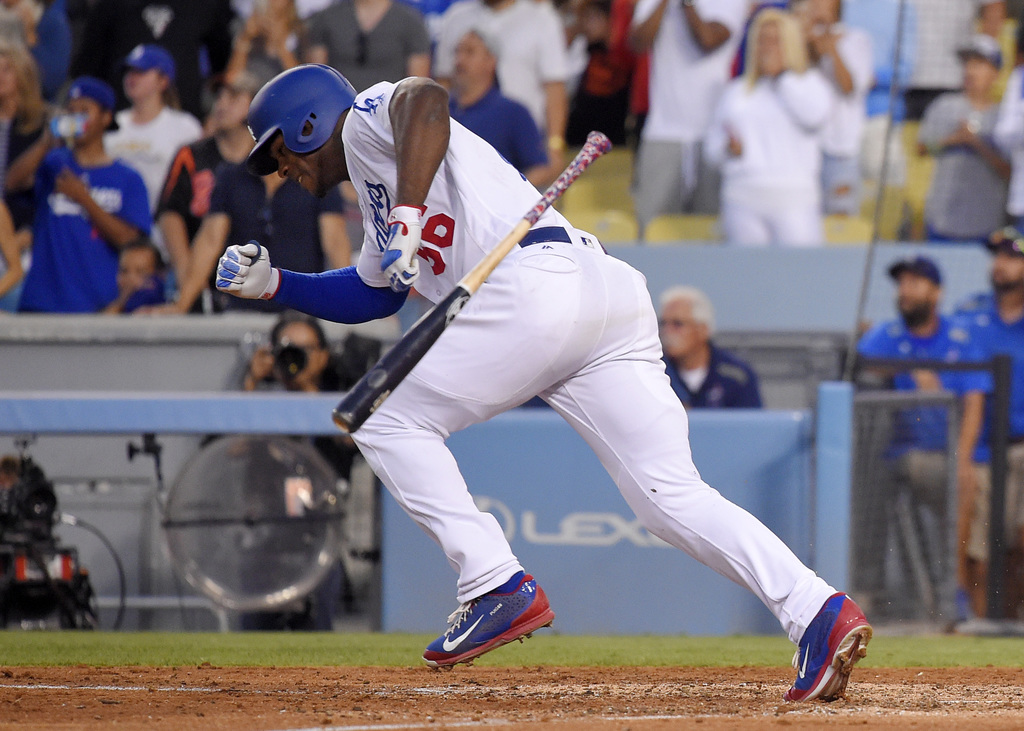 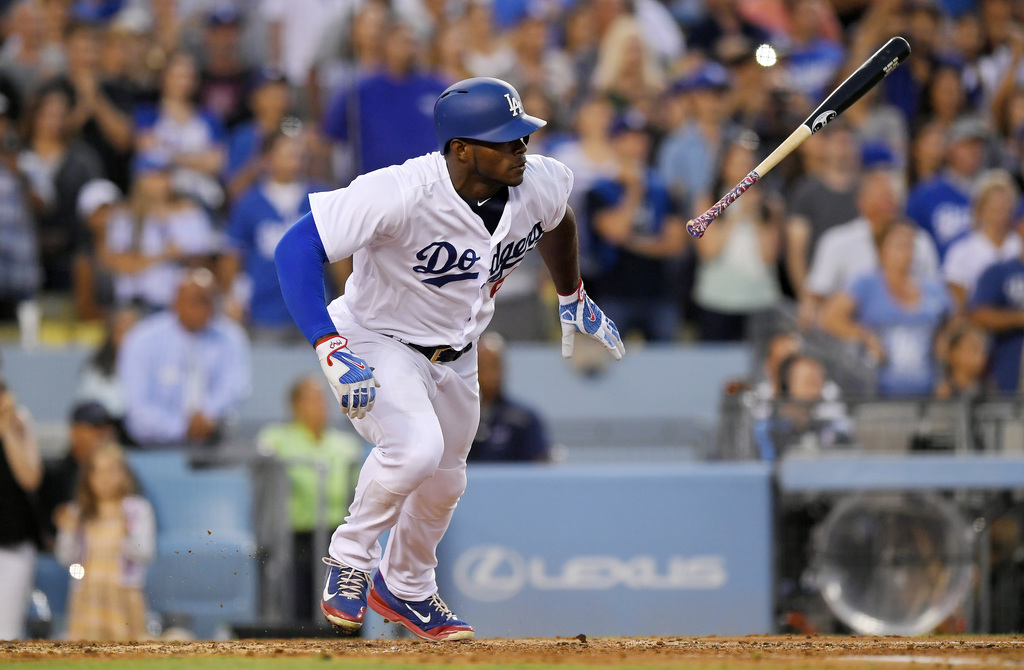 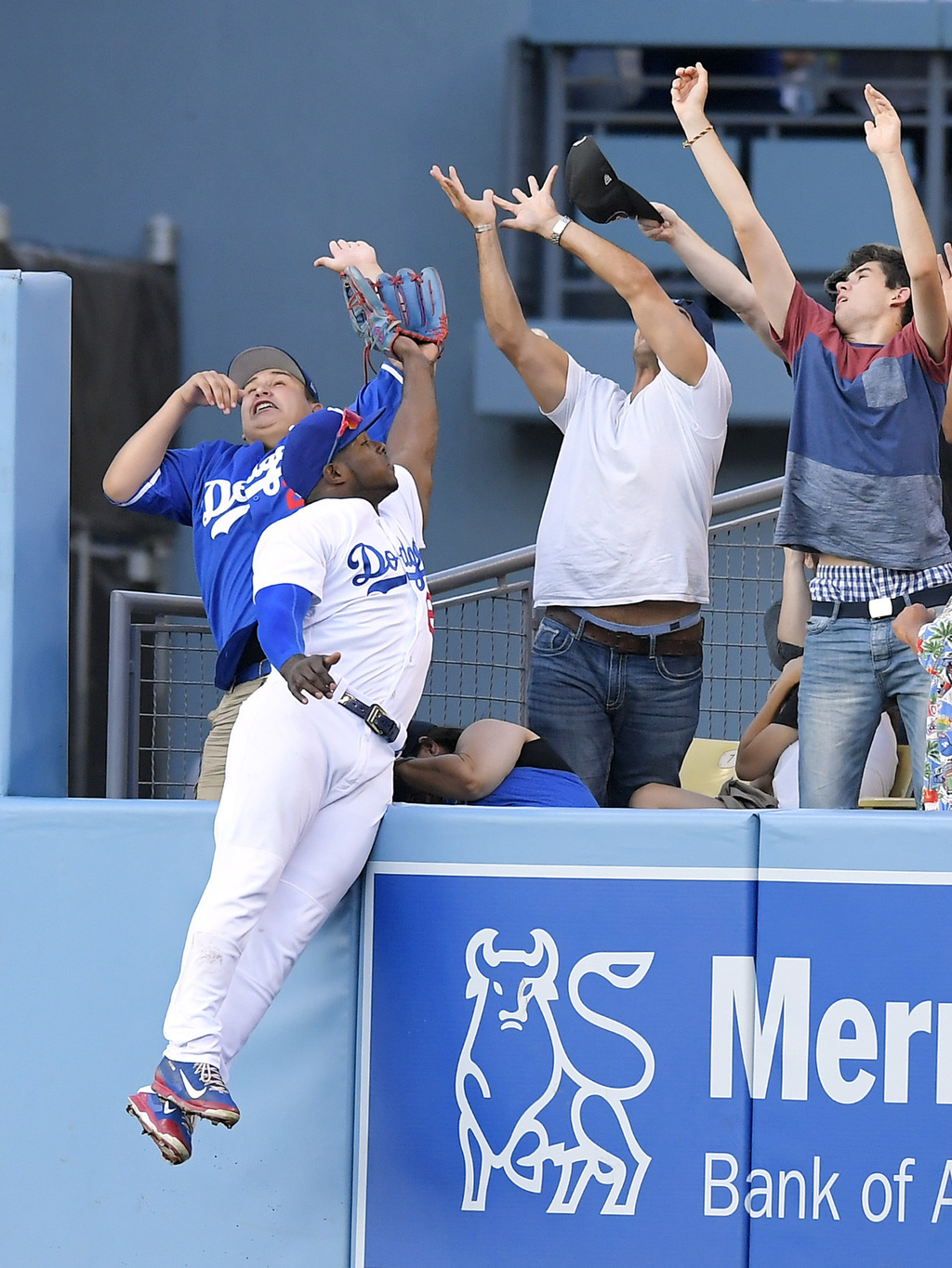 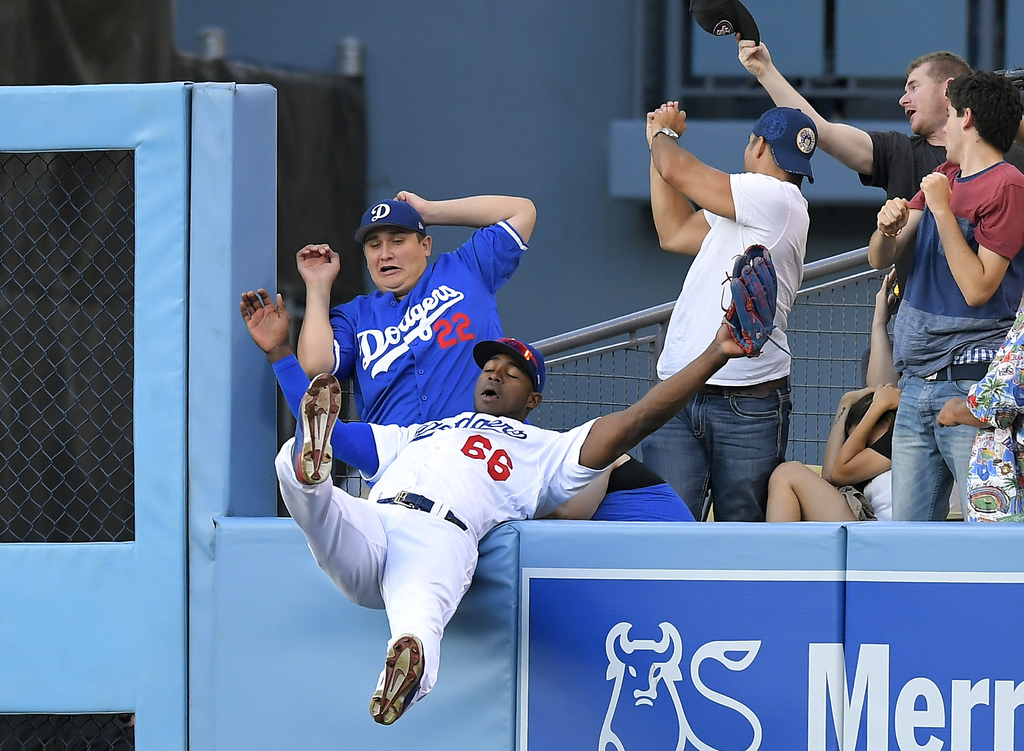 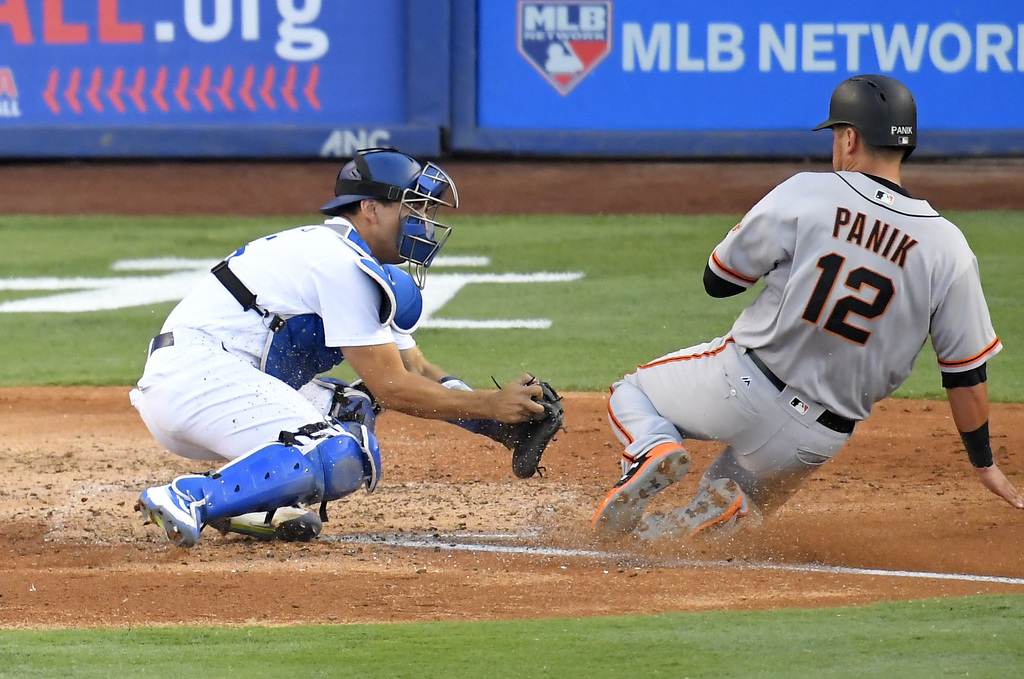 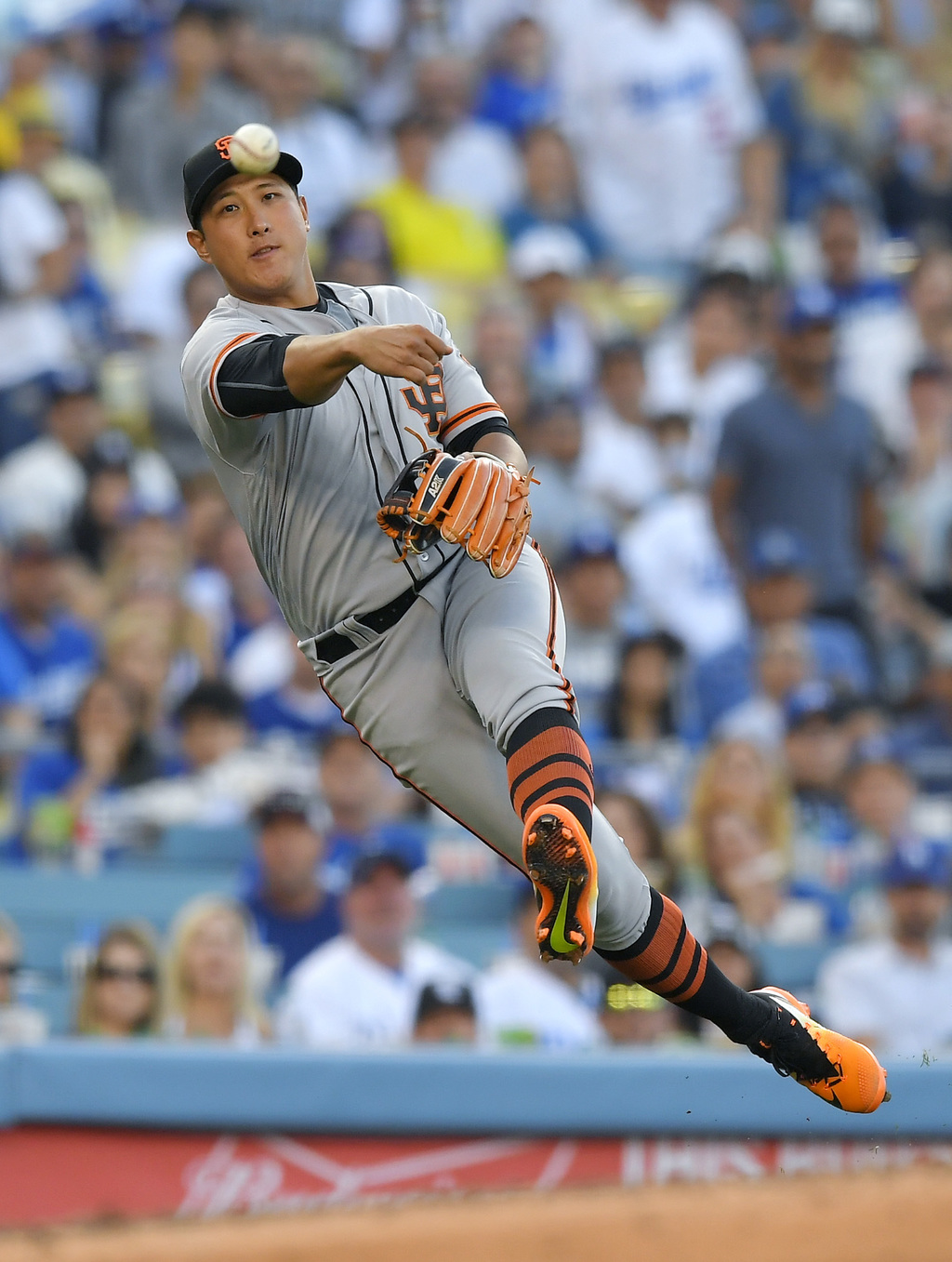 LOS ANGELES (AP) — In a season already filled with so many stirring comebacks, the Los Angeles Dodgers managed to add one that might be their best so far.

Kyle Farmer's two-run double in the 11th inning in his first major league at-bat lifted the Dodgers to their eighth straight win, 3-2 over the San Francisco Giants on Sunday night. Los Angeles players and coaches stormed the field in an unbridled celebration to congratulate the rookie.

"For his family to be here, to have the field stormed by his teammates, coaches, manager, it was something so special," Dodgers manager Dave Roberts said. "I think our players felt his excitement."

"I was just hoping get a good pitch to hit," said Farmer, who had his father, mother, sister, fiancee and his best friend in the stands all the way to the end. "Watching these guys hit the past three games I've learned a lot. It's fun to watch them. I was just trying to put something in the air, hopefully down the line. I did, just got lucky with a good swing."

"He's such a good man. The guys were pulling for him," Roberts said. "For him to be in that spot, we all love moments. Kyle's going to remember that moment for a long time, forever."

The Dodgers won for the 39th time in 45 games, and completed their 14th sweep this season. Los Angeles turned a franchise-record six double plays as it improved to 26-3 at home since June 7 and is now 74-31 overall, 4 1/2 games ahead of the Houston Astros for the best record in baseball.

Joe Panik had given the Giants a 2-1 lead in the top of the inning as he muscled the first pitch from reliever Luis Avilan through a drawn-in infield for a single into shallow center field that scored Kelby Tomlinson from third. Tomlinson had reached third after leading off the 11th with a single to center off reliever Brandon Morrow. He then stole second and took third on Denard Span's grounder to second.

"Everything is going right for them," Giants manager Bruce Bochy said. "Just the opposite from us."

Both team squandered opportunities to score in the 10th. The Giants left runners on first and third as Gorkys Hernandez fouled out to first baseman Cody Bellinger. The Dodgers then stranded runners on first and second when reliever Chris Gearrin retired Joc Pederson on a grounder to second.

The Dodgers tied the game 1-1 in the bottom of the ninth when Chase Utley led off with an infield single, stole second, and scored on Yasiel Puig's single up the middle. The Dodgers went on to load the bases with two outs, only to have Bellinger fly out to Giants left fielder Hernandez.

Los Angeles also came up empty after loading the bases in the eighth on three walks by reliever Hunter Strickland, as Austin Barnes to fly out to right fielder Hunter Pence to end the threat.

Conor Gillaspie had given the Giants a 1-0 lead in the eighth with his seventh career pinch-hit home run, driving an 0-2 pitch from reliever Josh Fields just beyond a leaping Puig over the wall in right field.

Giants: RHP Matt Cain will start the opener of a two-game series in Oakland, the first half of a four-game home-and-home set against the A's. Cain carries a personal eight-game losing streak, losing his most recent start, giving up six runs and six hits in four innings against Pittsburgh.

Dodgers: RHP Kenta Maeda will start the opener against Atlanta on Tuesday, bringing an 8-2 record with a 3.00 ERA over his last 14 appearances. He won his most recent start, giving up a run and five hits in five innings against Minnesota on Tuesday.