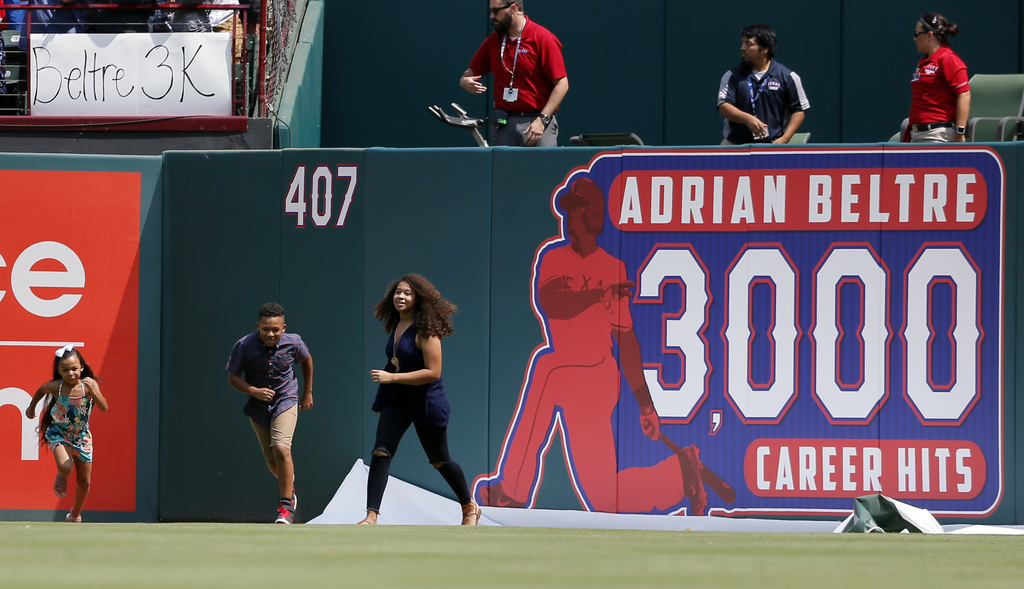 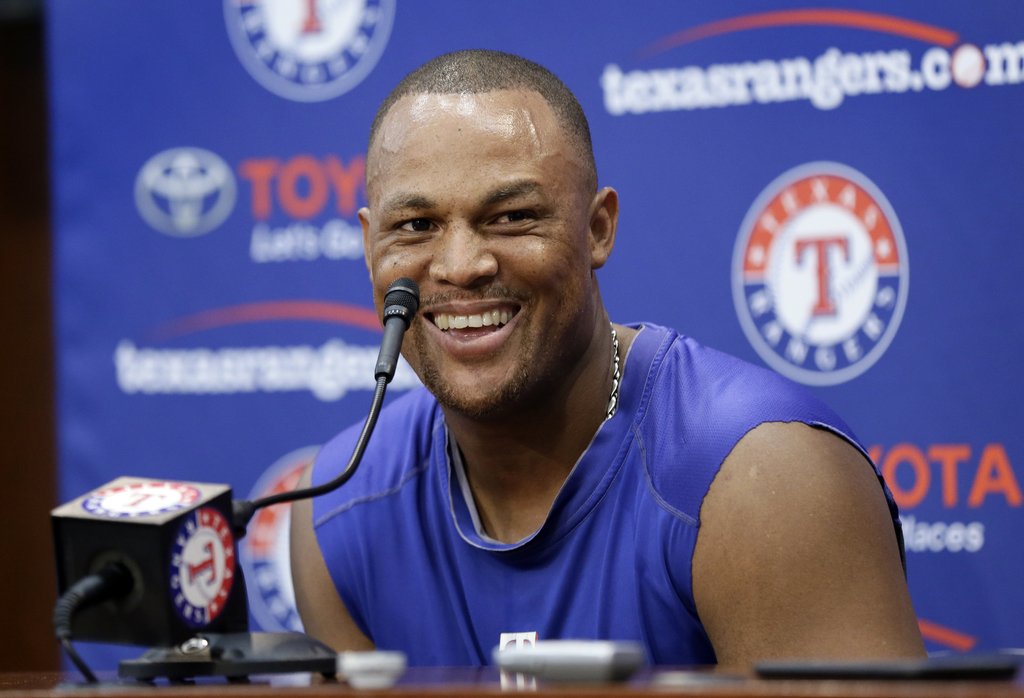 ARLINGTON, Texas (AP) — Adrian Beltre doubled for his 3,000th career hit, reaching the milestone in the Texas Rangers' 10-6 loss to the Baltimore Orioles on Sunday.

The Rangers already were down 4-0 when the 38-year-old third baseman, who went 1 for 5 in his 2,771st game, had a hard hit down the line past third base in the fourth inning.

Beltre became the first player from the Dominican Republic, and 31st overall, to join the 3,000-hit club in the major leagues.

Jonathan Schoop and Welington Castillo homered in a five-run fifth for a 9-2 Orioles lead. Castillo also had the last of three consecutive RBI singles off lefty Martin Perez (5-9) in the fourth.

Wade Miley (5-9) went five innings and one of the four hits he allowed being to Beltre, who grounded a 3-0 pitch that went past the bag and then ricocheted off the side wall into left field.

Caratini homered to straightaway center off a 1-2 fastball from Zach Davies (12-5) with one out in the seventh for a 3-2 lead, delighting the bevy of Cubs fans who made the trek north from Chicago. The Cubs took two of three games in an important series at Miller Park.

With the non-waiver trade deadline looming Monday, the Cubs increased their lead in the National League Central over the second-place Brewers to 2 1/2 games.

Lackey (8-9) struck out seven and allowed five hits over six innings, including Domingo Santana's game-tying, two-run homer in the sixth that just landed beyond outfielder Jason Heyward's outstretched glove in the right-field corner.

DETROIT (AP) — Justin Verlander pitched six scoreless innings in what could be his last start with Detroit.

Justin Upton matched a career best with six RBIs for the Tigers, who handed the Astros their first back-to-back losses since June 12-13.

Upton had four hits, including a seventh-inning grand slam, and scored twice.

In his last start before Monday's trade deadline, Verlander (6-7) gave up five singles and three walks while striking out six.

The subject of trade rumors since last winter, Verlander received a long standing ovation from the crowd of 31,970 when he walked off the mound after the sixth inning.

Lance McCullers Jr. (7-3), whose dad pitched for the Tigers in 1990, allowed five runs on eight hits in five-plus innings.

Cruz provided Paxton with an early cushion with a three-run shot in the first inning and Leonys Martin, recalled earlier in the day from Triple-A, homered in his first at-bat and saved a possible run with a diving catch in right field.

Paxton (11-3) had runners aboard in each of his six innings. The lefthander scattered six hits, striking out eight and walking none, with two hit batters in a 108-pitch outing. Paxton, sidelined most of May with a left forearm strain, was 6-0 in six July starts, allowing six earned runs in 39 1/3 innings with no home runs.

It was just the second win in eight games for the Pirates, who ended the Padres' four-game winning streak.

McCutchen has 22 homers. He connected with two outs in the first off left-hander Clayton Richard (5-12), with the ball clearing the fence just out of the reach of center fielder Manuel Margot. He went deep again in the eighth off rookie Jose Torres and then homered off the right-field foul pole with two outs in the ninth.

It was McCutchen's third multi-homer game of the season and 15th of his career. He also made a nice diving catch in center field to end the eighth.

NEW YORK (AP) — Corey Dickerson hit a go-ahead, two-run single in a three-run third, and Tampa Bay's bullpen allowed one hit over five scoreless innings to salvage the finale of a four-game series.

Cishek (2-1) pitched 1 2/3 innings, and Colome got three outs for his 30th save in 35 chances. Brett Gardner singled with one out in the ninth, advanced on a wild pitch and Clint Frazier walked. Colome then retired Aaron Judge on a flyout and Matt Holliday on a groundout.

Tampa Bay, which had been 0-6 at Yankee Stadium this year, won despite striking out 16 times. The Rays had lost eight of their previous 10 games.

Ronald Torreyes homered and drove in a career-high three RBIs for the Yankees, who had won six straight and eight of nine.

Alcides Escobar added a two-run single in the eighth and drove in three runs for the Royals, who lost in extra innings on Saturday after taking the series opener.

Rookie Rafael Devers hit a solo homer for Boston and starter Drew Pomeranz gave up one run on seven hits in 6 2/3 innings in his 100th career start.

Kelvin Herrera got the final three outs for his 23rd save, getting Mookie Betts to fly out with the bases loaded.

Pearce connected with one out off Bud Norris (1-4). On Thursday, Pearce's slam with two outs in the 10th inning lifted Toronto over Oakland 8-4.

Albert Pujols hit two home runs for the Angels, who were bidding for their first sweep since May.

Chicago had lost 14 of 15 coming into the game, including seven straight at home, and traded fan favorite Melky Cabrera to Kansas City shortly before the first pitch as part of a roster overhaul.

Jose Abreu got the ninth-inning rally started with a double off Bryan Shaw (4-5) to set up Davidon's heroics, the 21st home run of his rookie season.

Tyler Clippard (2-6) pitched a scoreless ninth to earn the win, the first for the White Sox at Guaranteed Rate Field since July 2. That game featured strong pitching from Jose Quintana and David Robertson, both of whom have since been traded.

Lynn (9-6), the subject of trade rumors the past few days, gave up two runs and four hits. He has allowed no more than two earned runs in each of his last six starts.

Lynn retired the last eight batters he faced in improving to 5-0 lifetime against Arizona. Trevor Rosenthal struck out the side in the ninth to pick up his sixth save in eight opportunities.

Martinez hit a two-run drive in the fourth to tie it, then had a sacrifice fly in the sixth that scored Jedd Gyorko with the go-ahead run.

Castillo (2-4) allowed one run on three hits, striking out six and walking one. He outpitched Dan Straily (7-7) — the right-handers were traded for each last January as part of a four-player deal.

The Marlins, who got a three-run homer from Marcell Ozuna in the ninth off reliever Raisel Iglesias, had their four-game winning streak snapped. NL home run leader Giancarlo Stanton was held out of Miami's lineup for the first time since May 31.

PHILADELPHIA (AP) — Freddy Galvis hit a bases-loaded single to right field in the ninth inning to give Philadelphia its second straight walk-off win.

Andrew Knapp led off the ninth with a double to left off Rex Brothers (1-2). Manager Brian Snitker lifted Brothers for Akeel Morris.

Morris walked pinch-hitter Ty Kelly to put runners on first and second. Cesar Hernandez was trying to advance the runners with a sacrifice, but his bunt stayed just inside the third-base line and Freddie Freeman's throw was not in time, loading the bases with no outs.

Galvis pulled Morris' second pitch into right to score Knapp and lift the Phillies to their fourth straight victory and eighth in the last 11.

Kelly's RBI single in the 11th on Saturday night gave Philadelphia a 4-3 win.

In the first game, Charlie Blackmon had four hits and scored four runs, and the Rockies roughed up Erick Fedde in his major league debut.

The Rockies had a 1-0 lead in the second game before Lind's two-run homer off Jon Gray (3-2). One out later, Goodwin followed with his homer for a two-run lead.

OAKLAND, California (AP) — Yonder Alonso homered in the bottom of the 12th inning to lift the Oakland over Minnesota.

Alonzo's 22nd homer of the season came on the first pitch he saw from Tyler Duffey (0-3) and was his second game-ending home run of his career.

Oakland, which won its second straight after a six-game skid, came in tied with the Los Angeles Dodgers for the major league lead with eight game-ending hits.

Josh Smith (1-0) pitched two innings to pick up the win.

The Twins lost for the sixth time in seven games and fell to 1-5 on a disastrous West Coast road trip in which they've blown leads in every game.