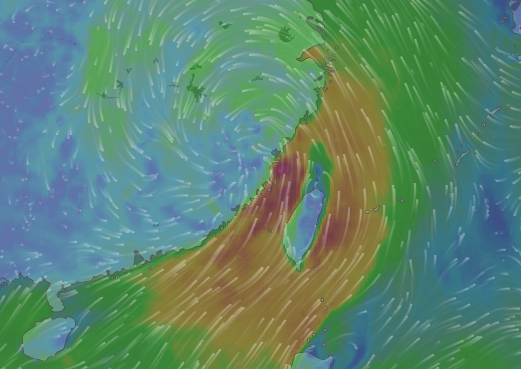 TAIPEI (Taiwan News) -- The eye of Typhoon Haitang, the second of a one-two punch, and the first time two typhoons have hit Taiwan within 24 hours in 50 years, is now over China's Fujian Province, however it is expected to continue to bring rain throughout Taiwan.

Less than 24 hours after Typhoon Nesat made landfall at Su'ao Township in Yilan County, northeastern Taiwan at 7:10 p.m. Saturday evening, Typhoon Haitang made landfall in Pingtung County at 4:40 p.m. on Sunday afternoon. Heavy flooding in Pingtung on Saturday as Typhoon Nesat made landfall. (CNA image)

Typhoon Haitang then swept through southern Taiwan Sunday evening, causing flooding in low-lying areas of Pingtung. As the typhoon continued on a northwesterly path it also dumped heavy rain on Taitung, Kaohsiung, Tainan, and Chiayi. Heavy flooding in Tainan on Sunday as Typhoon Haitang made landfall. (CNA image)

The Typhoon then plowed its way through Matsu before landing at 2:50 a.m. Monday in Fuqing City, east China's Fujian Province.

Though the storm has left Taiwan and is expected to weaken during the day, the Central Weather Bureau (CWB) predicted that its periphery and southwest airflow will bring heavy rain to Taichung, Nantou, Chiayi, Hualien, Taitung, Pingtung, Tainan, Kinmen, Penghu, Matsu, and mountainous areas of Kaohsiung. Residents in those areas are advised to beware of rock falls, mud slides, and flash floods, and should avoid activities in mountain and river areas.

Haitang was later downgraded to a tropical storm and as of 8 a.m. this morning, it was moving in a north-northwesterly direction at 15 kilometers per hour, with maximum sustained winds of 65 kph and gusts reaching 90 kph, according to the CWB.