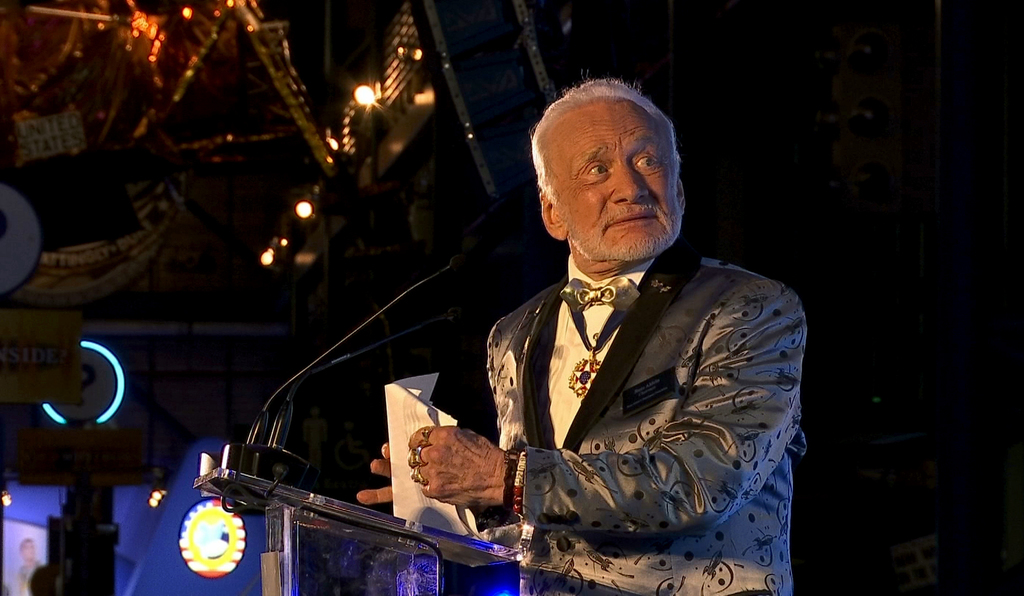 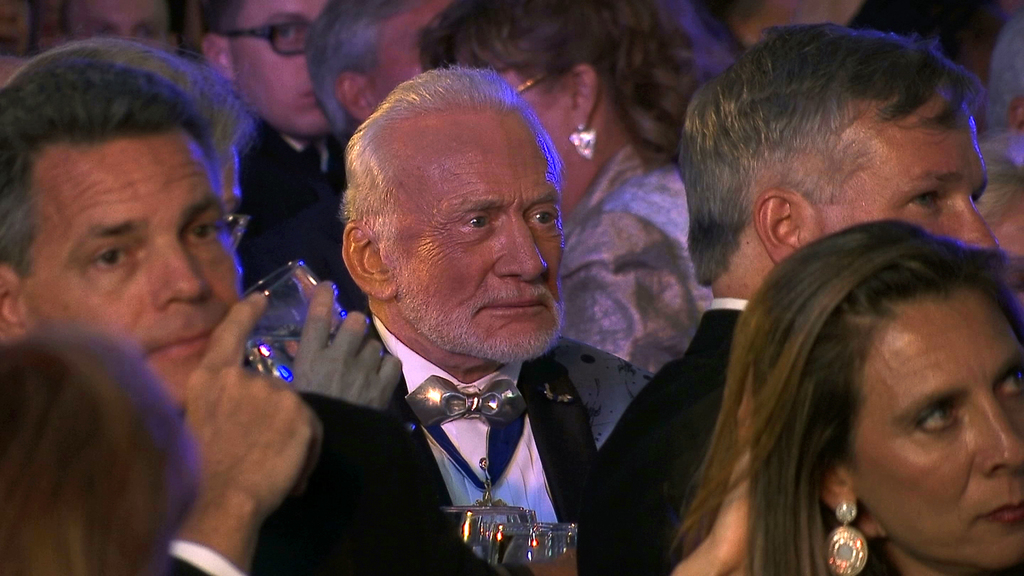 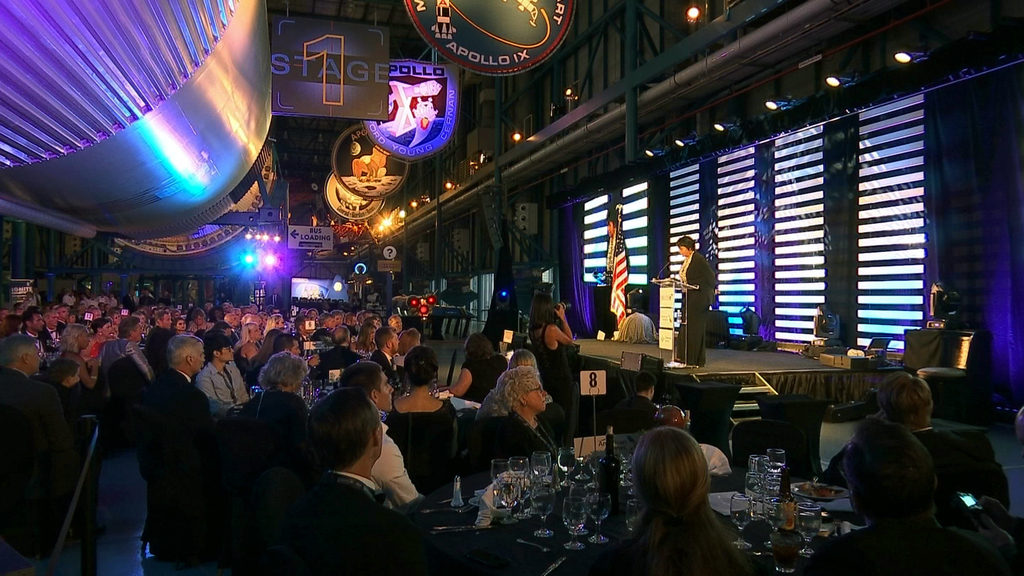 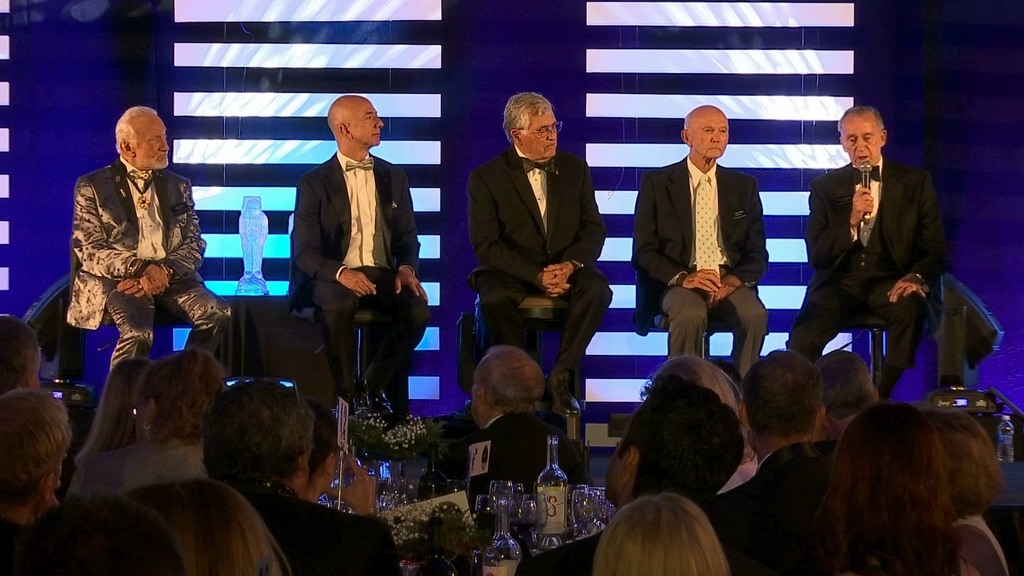 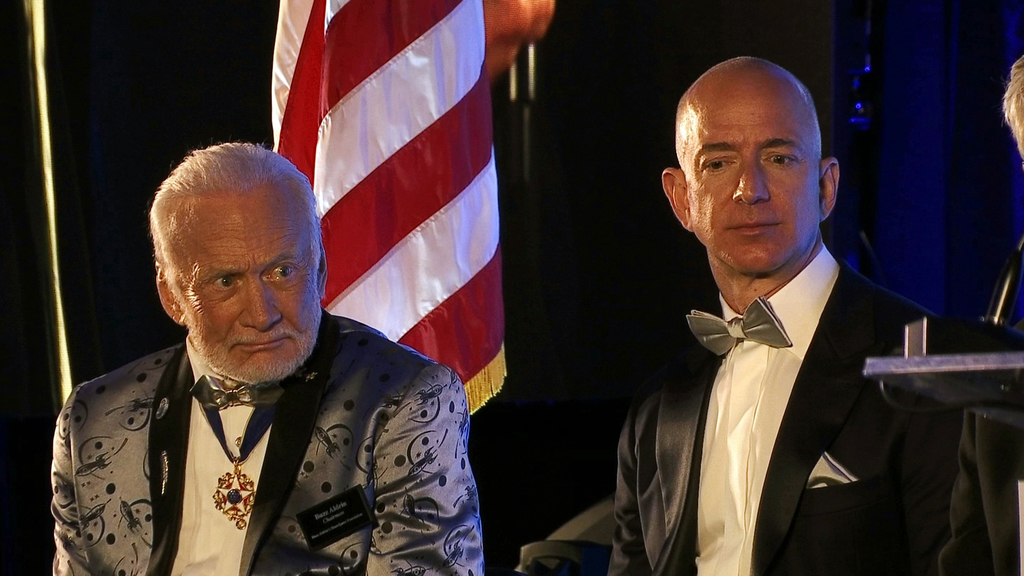 CAPE CANAVERAL, Fla. (AP) — Forty-eight years after he landed on the moon, Apollo 11 astronaut Buzz Aldrin rolled out a red carpet for the red planet at a star-studded gala at the Kennedy Space Center.

Aldrin, 87, commemorated the upcoming anniversary of the 1969 mission to the moon under a historic Saturn V rocket Saturday and raised more than $190,000 for his nonprofit space education foundation, ShareSpace Foundation. Aldrin believes people will be able to land on Mars by 2040, a goal NASA shares. The space agency is developing the Space Launch System and the Orion spacecraft to send Americans to deep space.

Apollo astronauts Walt Cunningham, Michael Collins and Harrison "Jack" Schmitt joined Aldrin, one of 12 people to walk on the moon, at the sold-out fundraiser.

"I like to think of myself as an innovative futurist," Aldrin told a crowd of nearly 400 people in the Apollo/Saturn V Center. "The programs we have right now are eating up every piece of the budget and it has to be reduced if we're ever going to get anywhere."

During the gala, the ShareSpace Foundation presented Jeff Bezos with the first Buzz Aldrin Space Innovation Award. Bezos, the founder of Amazon.com and the spaceflight company Blue Origin, is trying to bring the cost of space travel down by reusing rockets.

"We can have a trillion humans in the solar system. What's holding us back from making that next step is that space travel is just too darned expensive," Bezos said. "I'm taking my Amazon lottery winnings and dedicating it to (reusable rockets). I feel incredibly lucky to be able to do that."

"When Buzz says, 'Get your ass to Mars,' it's not just about the physical part of getting to Mars. It's also about that commitment to doing something big and audacious," Jemison told The Associated Press. "What we're doing looking forward is making sure that we use our place at the table."

Space memorabilia was auctioned at the gala, including an autographed first day insurance "cover" that fetched $42,500 and flew to the surface of the moon. Covers were set up by NASA because insurance companies were reluctant to offer life insurance to pioneers of the U.S. space program, according to the auction website. Money raised from their sale would have paid out to the astronauts' families in the event of their deaths. The covers were issued in limited numbers and canceled on the day of launch.

The gala is the first part of a three-year campaign leading up to the 50th anniversary of the moon landing to help fund advancements that will lead to the future habitation of Mars.

ShareSpace Foundation on Saturday announced a new nonprofit, the Buzz Aldrin Space Foundation, to create an educational path to Mars. During the past year, the foundation has gifted 100 giant maps of Mars to schools and continues to work with children to advance education in Science, Technology, Engineering, Arts and Math, or STEAM.