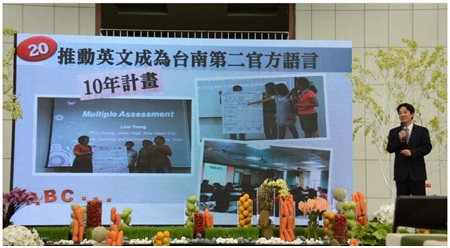 TAIPEI (Taiwan News)—Members of the Spoken English Presentation Class sponsored by Tainan City Government’s Civil Service Development Institute showed impressive results of their learning in a recent presentation as the city is counting on them to become a strong force to present the city to international tourists, the institute said on Tuesday.

Last year the institute sponsored the class for the first time and successfully trained 29 members, who have since then been helping the city government in the handling of international affairs and promoting English as the city’s second official language.

Tainan Mayor William Lai (賴清德) has been leading Taiwan in the effort of making English the city’s second official language. He has set a 10-year agenda for the endeavor, vowing to use English to bring the world to Tainan and market the city to the world.

Civil Service Development Institute director Hsu Ying-feng (許瑛峰) said that in the past when international visitors came to visit the city government, the only way to communicate with them was by hiring translators, which was usually costly and not very satisfactory as they could not convey what the city had been doing to the point.

Since the launch of the English presentation training program for the city government personnel, city diplomacy has become easier and more versatile as more departments are willing to join the program. Department of Personnel director Chiu Wen-chih ( 邱文智 ), who was the first-place winner of last year’s Mayor Cup English Presentation Contest, has received college instructors from Thailand and a German who came to speak in the institute after the training.

The Spoken English Presentation Class adopts the small-class format and includes native speakers as teachers, according to Civil Service Development Institute Cheng Chih-hung (鄭潔虹). The institute opened an all-English class this year, and soon after its opening, the class was full, which showed the city’s effort to promote English has been gaining momentum, Cheng said. During the learning result presentation, a member from the Bureau of Transportation talked about the low-carbon transportation of using T-Bike, bus and walk to tour around the city. A police officer in uniform talked about the worsening human trafficking issue and related case study and gave some thought on the issue. Their performances were quite impressive, according to the institute.

Cheng said that the class is a good tool for the city’s personnel to both sharpen their English and use it in their civil services. Chris said each member’s presentation had impressed him very much for their overcoming the stage fright and the full preparation of their scripts. He said he believes the members have been equipped with the ability to individually handle their tasks and have become a good force of English presentation for the city.

The members promised to see each other in the Mayor Cup English Presentation Contest.