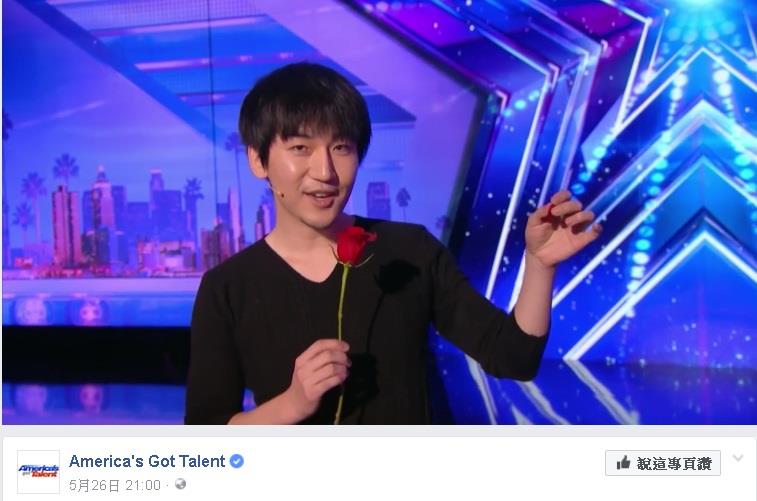 TAIPEI (Taiwan News)--Taiwanese magician Will Tsai (蔡威澤) stunned a full house and received a standing ovation from the judges and audience after performing an Incredible illusion live on "America's Got Talent" (AGT) a couple days ago.

AGT is an American reality television series on the NBC television network, featuring singers, dancers, magicians, comedians, and other performers of all ages competing for the advertised top prize of one million dollars.

Before the performance, AGT judge Simon Cowell asked Tsai, “Okay, Will, is it something we’ve never seen before?” Tsai said, “I’ve never done it for anybody. I just created it for this show.”

Tsai worked with cards, coins and rose leaves during the show, which he said he was hoping would be a turning point for his life.

Tsai’s performance was so great that Cowell later said, “This is the best magic in AGT history!”

Tsai said that AGT production unit invited him to perform for the show, and he felt it was a good opportunity for him. He was originally going to perform a different trick, but the props, which were transported from Japan, had encountered a problem when clearing U.S. Customs and Border Protection, so he changed the act into a coin show.

Tsai, 33, immigrated to Canada with his family at the age of 15. His family was going through bankruptcy at that time, so he had to work three part-time jobs to help shoulder his family’s economic burden, Tsai said. One day he saw a street magic show by chance and stumbled into his career as a magician, he said. After 13 years of self study, he finally made it to AGT and pulled off the great show.

During the show, Tsai used Taiwan’s NT$10 coins as the main prop, and he said he got the inspiration of using coins as a prop in Brazil three years ago when he was told by a doctor to make a will because he was suffering from serious pulmonary infections, Tsai said. After 10 years’ pursuit of fulfillment through work, he realized how fragile life could be, he said.

At the beginning of the show, he said, “I like flowers, because they remind me of how beautiful life is but also very fragile. And that’s why every second counts. In the grand scheme of things, life happens in the blink of an eye. So for the next few moments, don’t blink.”

He said that the whole point of the performance is what he said during the show, and the visual magic is just an aid. Flowers represent fragility of life, and money represents value; many people have forgotten to enjoy the beauty of life when pursuing value, he said.