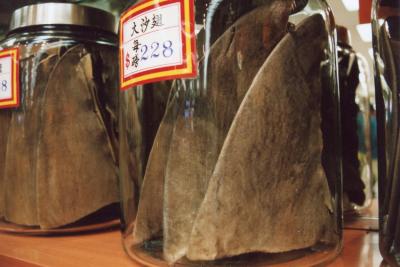 (HONG KONG / WILDAID) Responding to concern from conservationists, another major Chinese airline group has agreed not to transport shark fin products on its flights. In a letter to WildAid, the Eastern Air Logistics Co said the company has banned shipments of shark fin across its four airlines.

"In response to global sustainable development and protection of marine ecosystems, and to prevent sharks from extinction, our company has officially announced all shark fin shipments should be embargoed on the flights of China Eastern Airlines, Shanghai Airlines, China Cargo Airlines and China United Airlines, starting from 15 May, 2017," the policy says.

Each year, the fins from up to an estimated 73 million sharks are used in shark fin soup.

Worldwide, nearly 60 airlines and container shipping companies have adopted policies against the carriage of shark fins. In China, Hainan Airlines remains the only major national carrier yet to put in place a fin ban.

"It is very encouraging to see Chinese airlines leading the way on the issue of shark conservation," said Alex Hofford of WildAid Hong Kong. "US companies such as United Airlines, Delta Air Lines, and FedEx should be embarrassed by their failures to act similarly."

"In the majority of cases, shark fin soup in Hong Kong is ordered from a set menu by a single person on behalf of a large group. This is usually to celebrate a special occasion such as a wedding banquet, birthday, family reunion or corporate event," Hofford said.

"Maxim's has a firm responsibility to end this practice to save sharks and the marine environment by immediately removing shark fin from all its menus, especially its set menus."