TAIPEI (Taiwan News) -- A fire broke out in a auto body repair shop Thursday evening near the corner of Nongan Street and Jilin Road in Taipei's Zhongshang District at 9:50 p.m., according to firefighters on the scene.

Witnesses reported hearing an explosion, followed by a loss of power in neighboring buildings. Flames were then spotted erupting from the Haohan Car Cutie Salon (皓翰專業汽車美容保養), which services luxury sports cars.

Multiple fire engines quickly converged on the scene and extinguished the blaze within approximately 20 minutes, with the help of a fire truck crane.

No injuries were reported at the time of publication. The cause of the fire is not yet known. 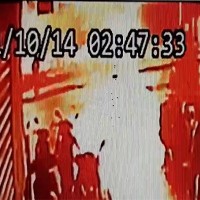