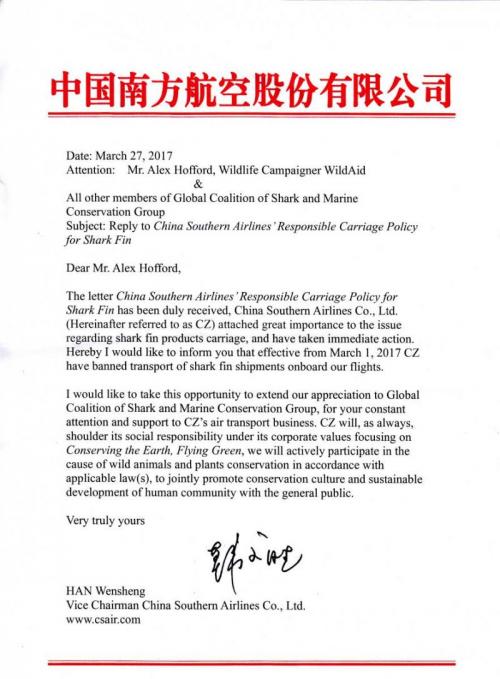 (China / WildAid) China Southern Airlines has banned transport of shark fin shipments on board its flights, according to a new company sustainability policy.

In a letter to WildAid, the airline says it "attached great importance to the issue" and will "actively participate in the cause of wild animals and plants conservation."

The announcement comes in response to a January letter to the airline sent by WildAid on behalf of a large coalition of concerned environmental groups.

"Because China Southern Airlines is based in Guangzhou, this particular shark fin airline ban will be hugely impactful for the simple fact that Guangzhou is the world's largest shark fin trading hub, even eclipsing Hong Kong."

Parts from more than 70 million sharks are used each year for shark fin soup. The harvest process most often involves live finned sharks being dumped back into the ocean to suffer long, painful deaths.

"China Southern Airlines' shark fin ban will no doubt send a strong message to the many Guangzhou shark fin traders that their business activities, which continue to push some species of shark such as the hammerhead and oceanic whitetip to the brink extinction, are often illegal, but always unethical, immoral, cruel and unsustainable," Hofford said.

36 other airlines and 17 container shipping companies across the world have adopted policies against the carriage of shark fins in response to appeals from conservation groups like WildAid.

"Both U.S. carriers have yet to make their exact stance clear on this urgent marine conservation issue. Therefore, WildAid calls on these two American companies, FedEx as well as United Airlines, to join their Chinese counterparts, Air China and China Southern Airlines, by suspending all shark fin shipments with immediate effect," he said.

While shark fin imports into mainland China declined by 80% between 2011 and 2014, according to official government statistics released last year, too many sharks are still killed to supply remaining demand.

WildAid continues to work to reduce further the demand for shark fin in mainland China as well as Hong Kong, Taiwan and other parts of Southeast Asia.

Leadership from major airlines, shipping lines, hotels and other businesses shows the strong public sentiment in favor of conserving sharks and other wildlife.