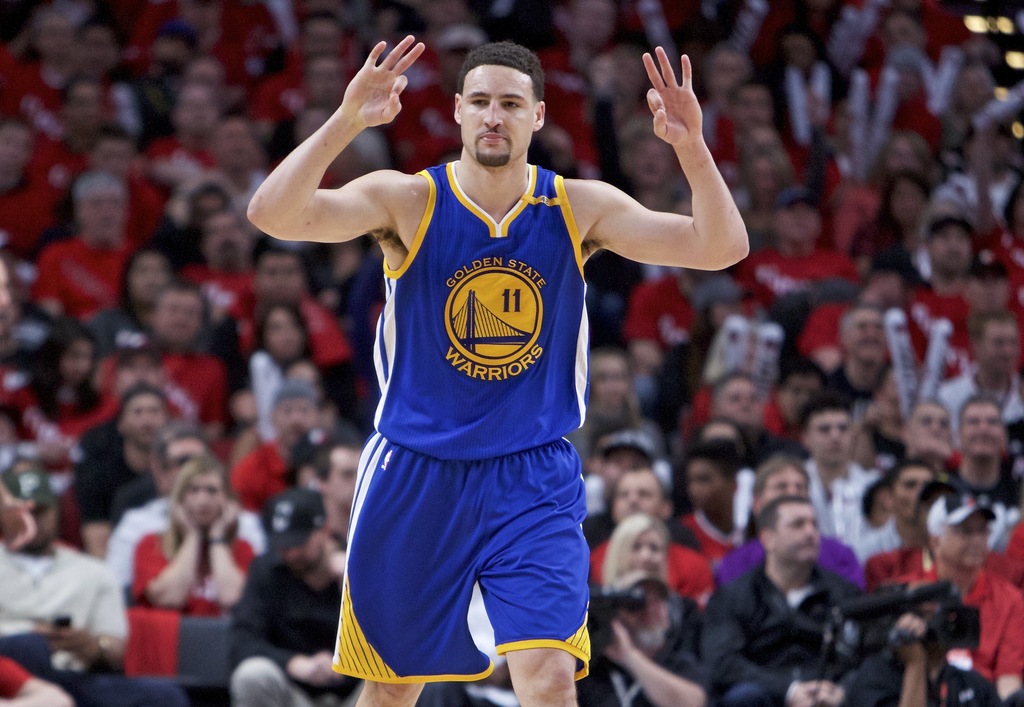 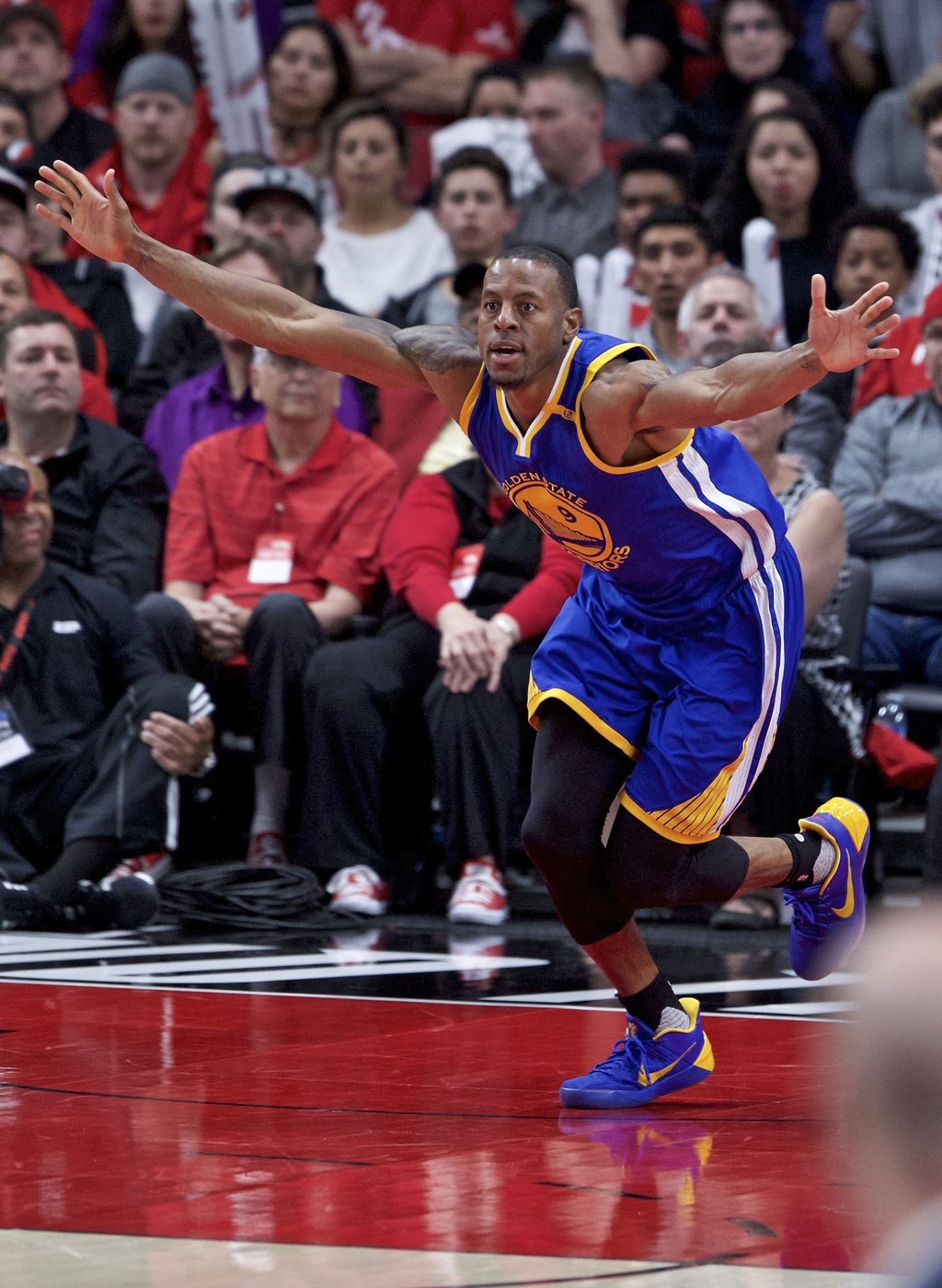 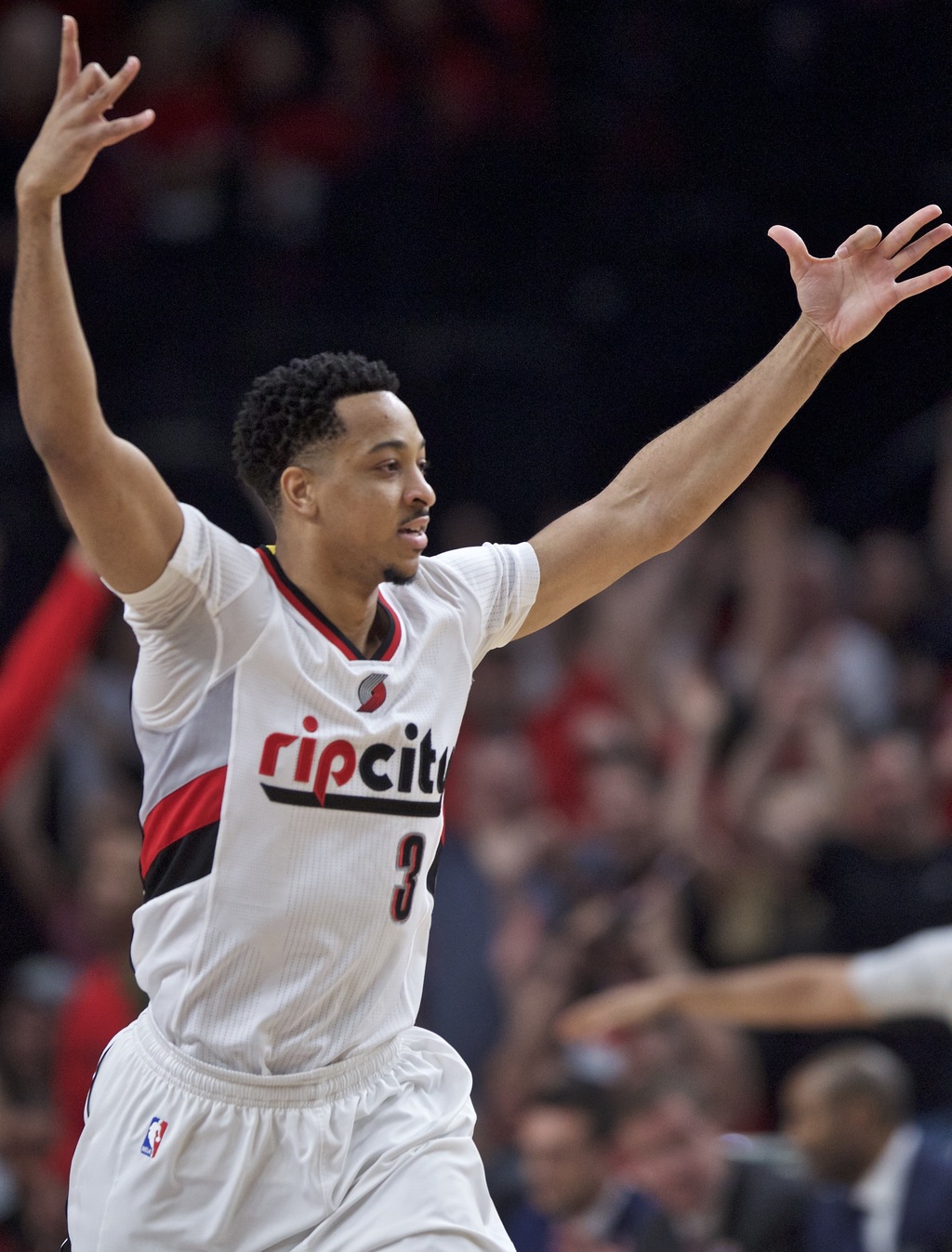 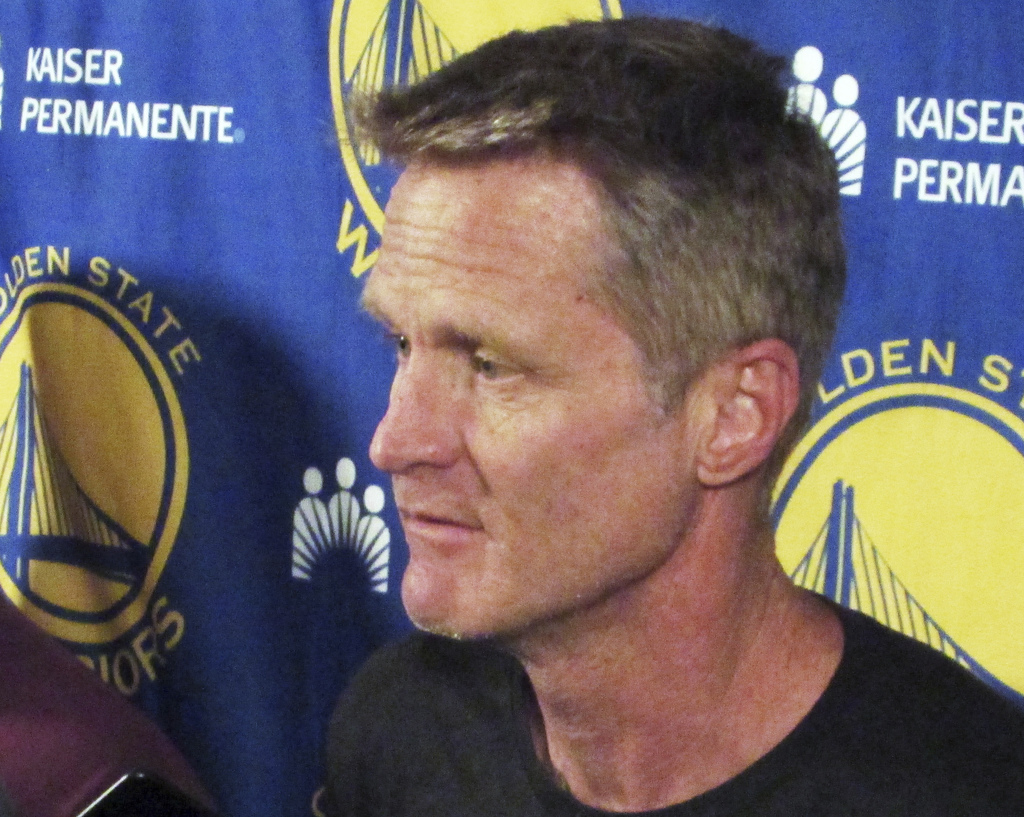 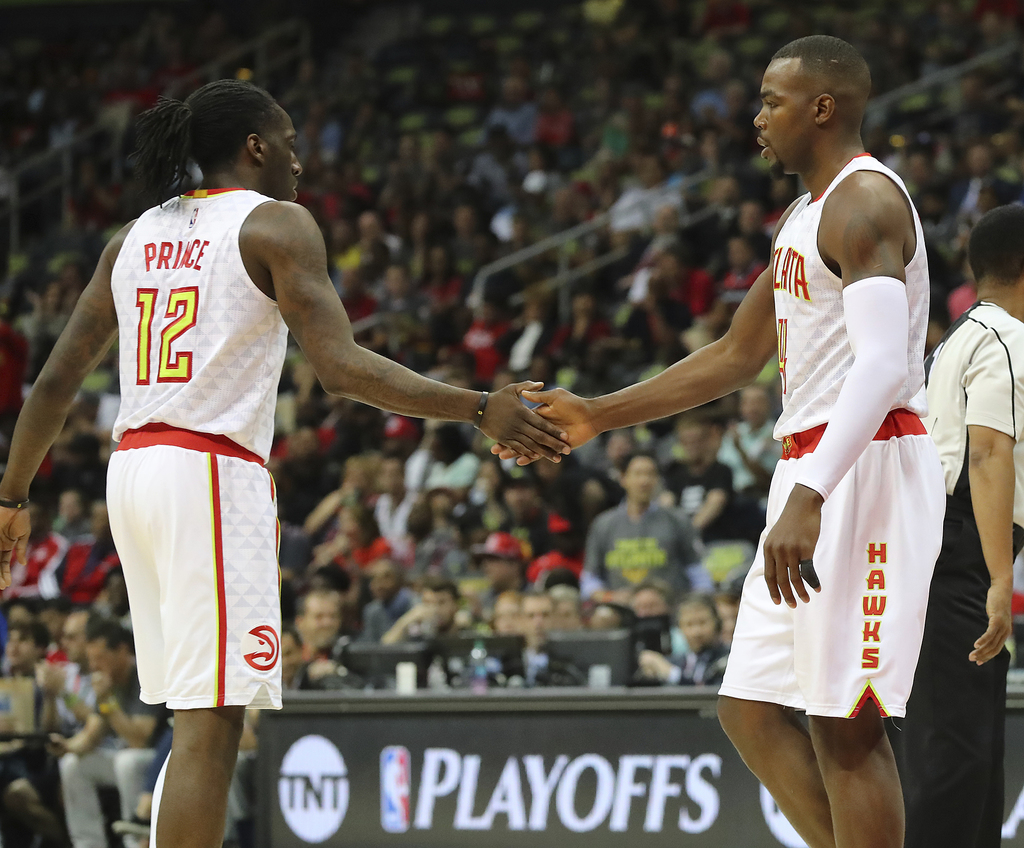 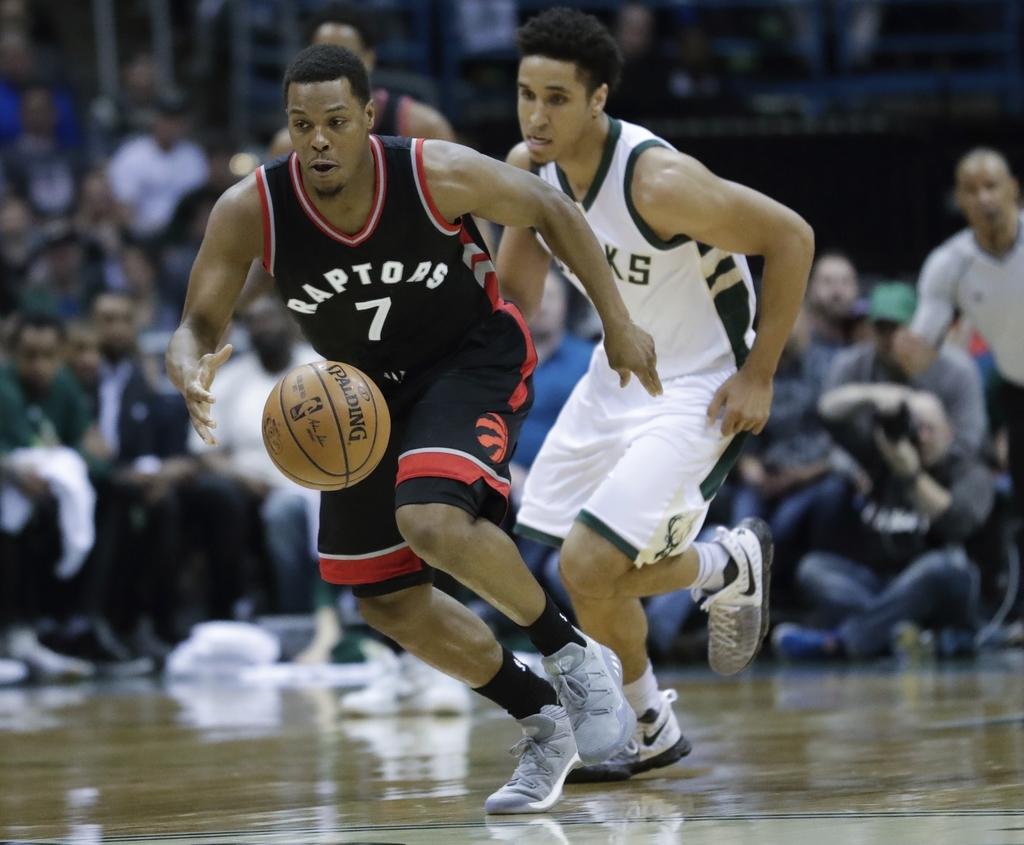 PORTLAND, Oregon (AP) — With coach Steve Kerr unavailable because of a back problem, the Golden State Warriors are in capable hands with assistant Mike Brown.

Kerr, the reigning NBA Coach of the Year, stayed behind at the team hotel Saturday night while the Warriors overcame a slow start to beat the Trail Blazers 119-113 and take a 3-0 series lead.

Kerr announced Sunday that he would not be on the sidelines when Golden State tries to close out the series Monday night at the Moda Center. It's one of three games on tap for the day: Toronto hosts Milwaukee with that series even at 2-all, and Washington has a 2-1 advantage in its series with Game 4 at Atlanta.

Golden State's players praised Brown for stepping into a lead role with short notice. A first-year assistant for the Warriors, Brown has plenty of experience as former head coach of the Cleveland Cavaliers and the Los Angeles Lakers.

"Well we know he's comfortable in that position and he's got a ton of playoff experience. He's been a head coach in this league a long time, a very successful one," Klay Thompson said. "Obviously we miss Steve but Mike did a tremendous job and he's been there before, you could tell. We appreciated his composure. He was tremendous."

In the first of two stints with Cleveland, Brown led the Cavs to their first-ever NBA Finals appearance in 2007. He was named the league's Coach of the Year in 2009 when Cleveland finished with 66 wins.

Draymond Green praised Brown as the MVP of Game 3, recounting a moment in the fourth quarter where he kept Green in the game despite playing the entire third — because the Warriors were making their comeback.

"When (he makes) those decisions that he made like that on the fly, it shows why he's been a head coach multiple times in this league. It shows why he's been to the finals. Why he's been around this league for 30 years," Green said. "He was thrown into the fire. He didn't find out he was coaching until today, and to make decisions like that in a hostile environment about to lose game three, and to do that, that was pretty big time for him. So that was huge."

Kerr, 51 still experiences lingering symptoms from complications following two back surgeries after the franchise's run to the 2015 championship. He missed the first 43 games last season dealing with symptoms such as headaches, nausea and an aching neck.

Here's what to know on Monday:

NEED TO KNOW: The Warriors can sweep the series on Monday and get a bit of rest before they'll face the winner of the first-round series between the Los Angeles Clippers and the Utah Jazz. The Clippers held a 2-1 lead in the series going into Sunday night's game in Salt Lake City.

KEEP AN EYE ON: JaVale McGee. Twice the 7-footer has come off the bench and had a big impact. He had 15 points in Game 2 before 14 in Game 3 — well above his regular season average of 6.1 points. Following the latest game, acting coach Brown said: "In that third quarter, obviously you guys saw it, he was fantastic and that's why we went to him down the stretch. Normally we don't go back to him, but his length, his size, his athleticism we really felt affected the game on both ends of the floor."

INJURY UPDATE: Warriors F Kevin Durant is listed as questionable with a strained left calf that has kept him out of last two games. Also unknown is the availability of Matt Barnes (right ankle/foot sprain), and Shaun Livingston (right index finger sprain).

The Blazers will be without center Jusuf Nurkic. The big man missed the final seven games of the regular season and the first two games of the playoffs with a nondisplaced fracture in his right leg. He came back for Game 3, but wasn't himself and finished with two points and 11 rebounds in less than 17 minutes.

PRESSURE IS ON: The Blazers would like to steal just one away from the defending Western Conference champions. Damian Lillard said pride is on the line: "At the end of the day, we've still got games to play. Right now, you've got to have some pride in having a sweep on the line and try to go get this next one on Monday and go from there a game at a time."

NEED TO KNOW: The nastiness between the teams ramped up even more when Washington's Markieff Morris called Atlanta star Paul Millsap a "crybaby" after the Hawks' blowout victory in Game 3. Millsap took the comment personally and it will be interesting to see how it affects his play. It would be hard to top his last performance, when he led the Hawks with 29 points and 14 rebounds, to go along with five assists, two blocks and one steal.

KEEP AN EYE ON: John Wall vs. Dennis Schroder. Wall has played brilliantly in the series, averaging 31 points per game, but Schroder is also coming off a big game (27 points, nine assists). Schroder changed things up defensively in Game 3, picking up Wall in the backcourt, and it seemed to pay dividends. While Wall scored 29 points, he was held to just seven assists and wasn't quite as effective getting his teammates involved.

INJURY UPDATE: Wizards F Otto Porter Jr. left the last game with a strained neck, but he was feeling much better Sunday and took part in practice. It looks like he'll be good to go for Game 4.

PRESSURE IS ON: G Bradley Beal. The Washington star has struggled with his jumper all series, and he was especially anemic in Game 3 with just 12 points on 6-of-20 shooting, missing all six attempts beyond the 3-point arc. The Wizards want him to keep shooting, however, and believe it's just a matter of time before he breaks out of the slump.

Milwaukee at Toronto, series tied at 2-2.

NEED TO KNOW: DeMar DeRozan was an active presence in Game 4 with 33 points and team-highs of nine rebounds and five assists. The Raptors' star is back on more comfortable turf at home, having erased memories of his 0-for-8 nightmare in Game 3 in Milwaukee. Backcourt mate Kyle Lowry had 18 points, proving once again that Toronto is at its best when its star guards are productive.

KEEP AN EYE ON: Whether the Raptors keep guard Norman Powell in the starting five. The 6-foot-4 guard replaced center Jonas Valanciunas to give Toronto a smaller but quicker lineup to keep up with the athletic Bucks. Powell helped guard Khris Middleton, and the Bucks' second-leading scorer was held to 10 points on 4-of-13 shooting.

INJURY UPDATE: None of note.

PRESSURE IS ON: The younger Bucks and how they respond after the Raptors reset the tone of the series the Game 4 slugfest. Watch how Giannis Antetokounmpo responds after being held to 14 points on 6-of-19 shooting and committing seven turnovers. Playoff games on the road after subpar outings are situations in which up-and-comers like Antetokounmpo polish their reputations as NBA stars.

Paul Newberry in Atlanta and Genaro Armas in Milwaukee contributed to this report.