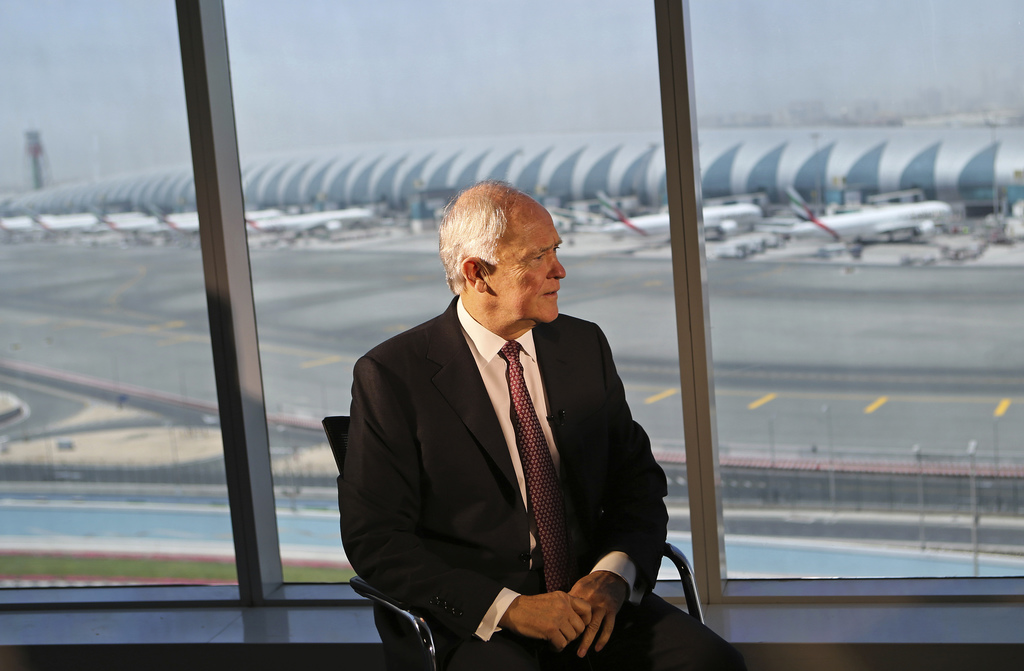 DUBAI, United Arab Emirates (AP) — Emirates remains committed to the U.S. market despite plans to slash 20 percent of its flights in the wake of tougher security and visa measures put in place under the Trump administration, the airline's president said Thursday.

In his first interview since announcing the cutbacks, Tim Clark told The Associated Press that the Mideast's biggest carrier has no intention of pulling out of the 12 U.S. cities to which it currently flies.

He said the decision to cut flights to five cities was a temporary response to a drop in demand, and does not signal a desire by Emirates to halt its expansion in the world's largest aviation market.

"This is not a permanent arrangement. ... I do not see this as a paradigm shift," Clark said. "Obviously our plans remain in place and we are as bullish and as confident about the U.S. markets as we have been."

Emirates said Wednesday it was cutting 25 of the 126 weekly flights it operates into the U.S. from Dubai starting next month. It blamed the move on stiffer U.S. security measures and attempts to ban travelers from some Muslim-majority nations since President Donald Trump took office.

Emirates' base at Dubai International Airport, the world's busiest international air hub, is a major transit point for travelers affected by Trump's executive order suspending visas to people from Iran, Libya, Somalia, Sudan, Syria and Yemen. Like an earlier ban that also included Iraqi citizens, it has been blocked from taking effect by the courts.

Dubai was also one of 10 cities in Muslim-majority countries affected by a ban on laptops and other personal electronics in carry-on luggage aboard U.S.-bound flights.

That surprise decision left Emirates scrambling to implement new procedures allowing passengers to use their devices up until boarding. The carrier also rolled out a service to lend tablet computers to first and business-class passengers on U.S.-bound flights.

Emirates will comply with all U.S. security directives and is "not in a position to judge whether the United States are right or wrong," he said.

Clark declined to detail how much of a financial hit the Dubai government-backed carrier has taken over the past three months, but he described the falloff in passenger demand as "significant."

"It is not something that Emirates does lightly when it starts pulling capacity out of markets that it's spent millions of dollars developing and operating," he said. "So when it gets to this, suffice to say they are falls which cause us to make those kinds of changes."

Emirates does not provide financial details solely for its U.S. operations. The Americas region, which also includes routes to Canada and Latin America, generated $3.3 billion in revenue, or 14 percent of total sales, in the fiscal year ending March 2016, according to Emirates' last annual report.

The cutbacks will mean twice daily Emirates flights to Boston, Los Angeles and Seattle will fall to once a day. Daily flights to Fort Lauderdale and Orlando will be trimmed to five per week.

Emirates and its smaller Gulf rivals have faced stiff resistance from big U.S. airlines and their labor unions, who accuse the Mideast carriers of being unfairly subsidized by their governments. The Gulf carriers strongly dispute the allegations.

U.S. airline executives made a personal pitch to Trump earlier this year to restrict Gulf carriers' access after failing to persuade the Obama administration to curb their expansion.

Clark said he does not see Emirates' decision to cut flights in the U.S. as a victory for his American critics, insisting Emirates would not "be scared off by what people say."

But he did take a jab at United Airlines, which is part of a campaign opposing more U.S. routes for Gulf carriers, over its handling of a passenger hauled from an overbooked flight. An Emirates ad released last week also ribbed the Chicago-based carrier over the incident.

"You need really to put the customer at the heart of your business. You need really to stop treating them as cattle," he said. "The United disgraceful episode was a classic case of how corporate culture indicates that particular company has lost the plot with regard to what it should be doing."

United did not respond directly to Clark's comment, sharing instead a previous statement from CEO Oscar Munoz apologizing for the incident and vowing to "fix what's broken."