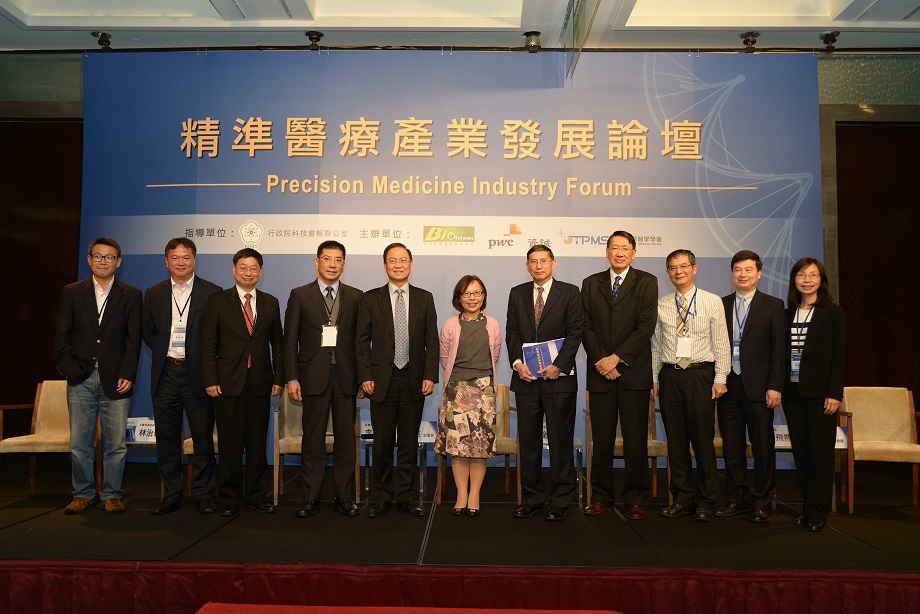 TAIPEI (Taiwan News)—Taiwan's biotech and pharmaceutical industry was one of the first to be named in the original Tsai Administration's 5+2 economic policy to transform the nation's economic structure, and is viewed as the upcoming medical treatment trend that Taiwan cannot miss out on, said Johnsee Lee (李鐘熙), the Honorary Chairman of Taiwan Bio Industry Organization (Taiwan BIO) during the Precision Medicine Industry Forum 2017 in Taipei, Wednesday.

"Fourteen Taiwan hospitals were ranked among the world's top 200 hospitals in the TV program, coming in just second after U.S, which means our medical system ranks third in the world and is the top leader in Asia," said Chang.

Taiwan has taken strides legally by loosening the definition of high-risk medical equipment under the amended Biotech and New Pharmaceutical Development Act Article 3, which was approved by the Legislative Yuan on April 10, 2017, said Lin.

The government is also facilitating the use of the laboratory developed test (LDT) in the biotech field, which takes a much shorter time than the traditional in vitro diagnostic (IVD), said Shiow-Ing Wu (吳秀英), deputy director general, Bureau of Health Promotion, Department of Health, Taiwan.

The nation also has potential to develop molecular targeted therapy for lung cancer caused by Her2exon20 insertion that currently is unavailable on the market, said Shih Chuan (石全), the head of biotechnology research lab at The National Health Research Institutes (NHRI). Shih's lab has developed a molecular targeted therapy drug that is undergoing the process of clinical trials.

Taiwan is closely following the lead of the U.S. in the field of precision medicine. Last September, the U.S. government invited Taiwan to join its global initiative to prevent cancer, the U.S. Cancer Moonshot Plan in September 2016.

A year earlier, U.S. President Barack Obama launched the Precision Medicine Initiative, and invested US$630 million into the project with the aim of gathering the health studies of one million people to build a shared cancer database platform for medical professionals and the private sector.

Since 2014, Taiwan has been trying to build its own 300,000 cohort open Biodata base that can be shared among public and private organizations, and so far has gathered 80,452 volunteers to participate, but progress has been hindered by the lack of talented big data analysis engineers, said Chen.

Medical experts at the forum anticipated precision medicine will become a disruptive technology, clinics in the future will no longer require medical staff, and medical diagnosis might be even conducted online based on the patients' omics profile, said President of Taipei Medical University Yan Yen (閻雲).

Omics is comprised of a person’s genemoics, epigenomics, protemics, metabolomics, microbiome data. In layman’s terms, everything related to one's genetics, metabolism rates, protein, and microorganisms, such as bacteria in the body’s ecosystem.

According to Lee, precision medicine should be beneficial for hospitals and insurance companies by helping reduce waste of medical resources by taking preventive measures in advance.

What is precision medicine?

Precision medicine is not a new concept, doctors were fully aware that each patient’s reaction to the same medication dosage administered was unique for almost 30 years in the U.S, said Chen Yuan-Tsong (陳垣崇), Distinguished Research Fellow at Institute of Biomedical Science at Academia Sinica (中研院).

Different ethnicities' response to the same amount of drugs prescribed by doctors varies widely, the dosage that works for a person of European descent for example, might be toxic enough to kill an Asian, but big pharmaceutical companies did not want the findings to be publicized, he added.

For instance, it has become common knowledge in the medical community that wafarin, a medicine to treat blood clots, is less effective in Asian patients, noted several medical experts at the forum.

"I would like to clarify in my presentation that precision medicine is not the equivalent to targeted cancer treatment,”said Shih.

In short, precision medicine is tailored medical treatment based on an individual's DNA sequence data, which is used to interpret a person’s medical condition and predict what drug treatment would work best for the patient.

Each person reacts uniquely to the same type and dosage of medication, depending on how healthy their metabolism system is, some people can quickly absorb the pill contents, while others might have difficulty digesting it, said Yan.

The final aim of precision medicine is to become a type of preventive medicine that takes into consideration a person’s lifestyle, environmental factors, and health data gathered from wearable health monitoring devices to help doctors take preemptive measures.

"However, most Taiwanese doctors are not traditionally trained to interpret large volumes of genetic sequence data,” said Yan.

Precision medicine is multidisciplinary and promising for those in the medical field, pharmaceuticals, insurance companies, bioinformatics, big data analysis, software algorithm engineers to sort and translate billions of DNA sequence into simple medical language that can be easily interpreted by the average hospital staff member.