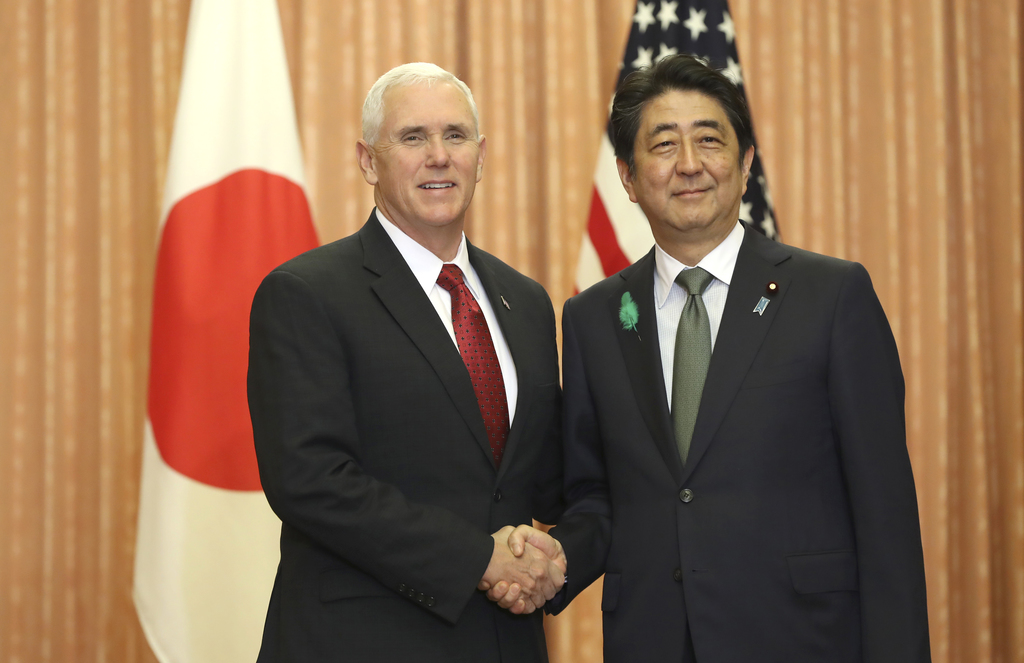 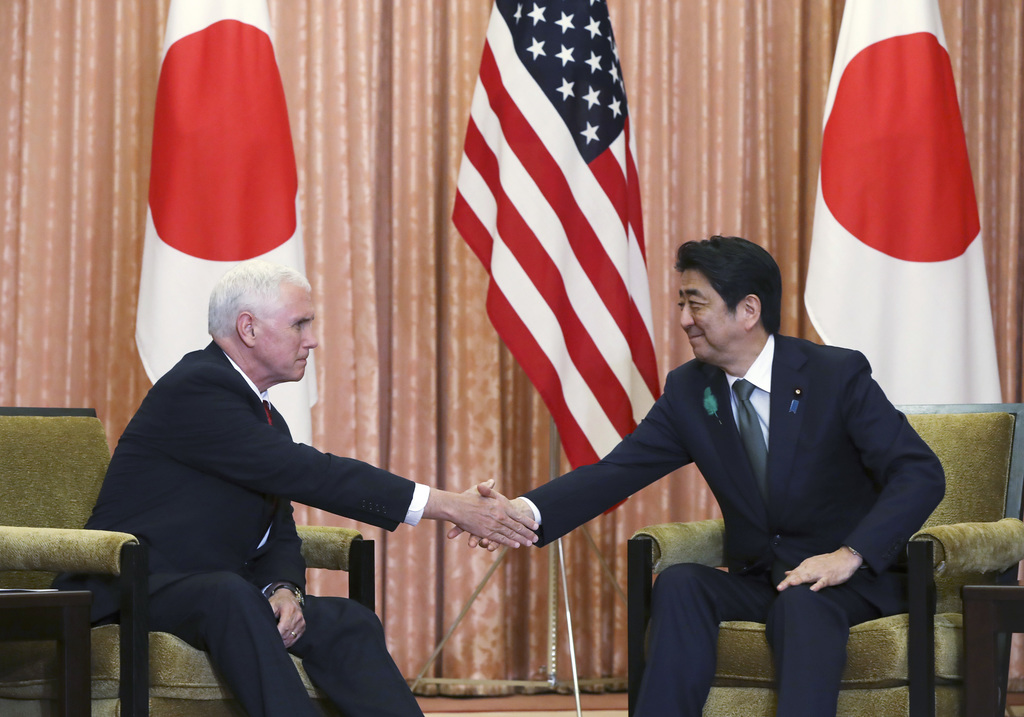 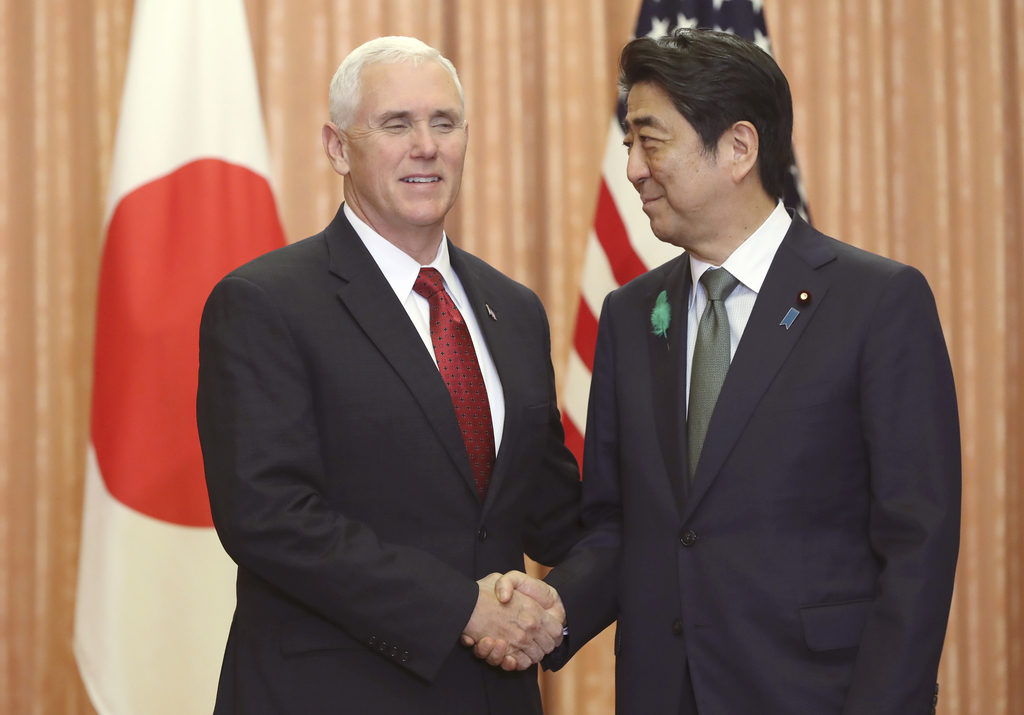 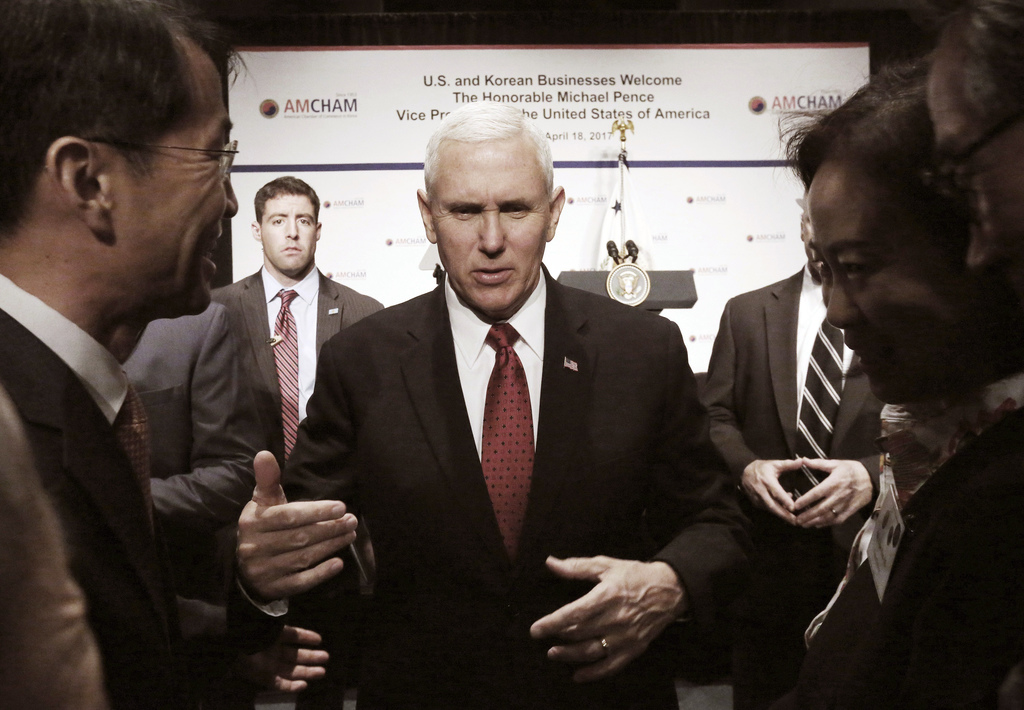 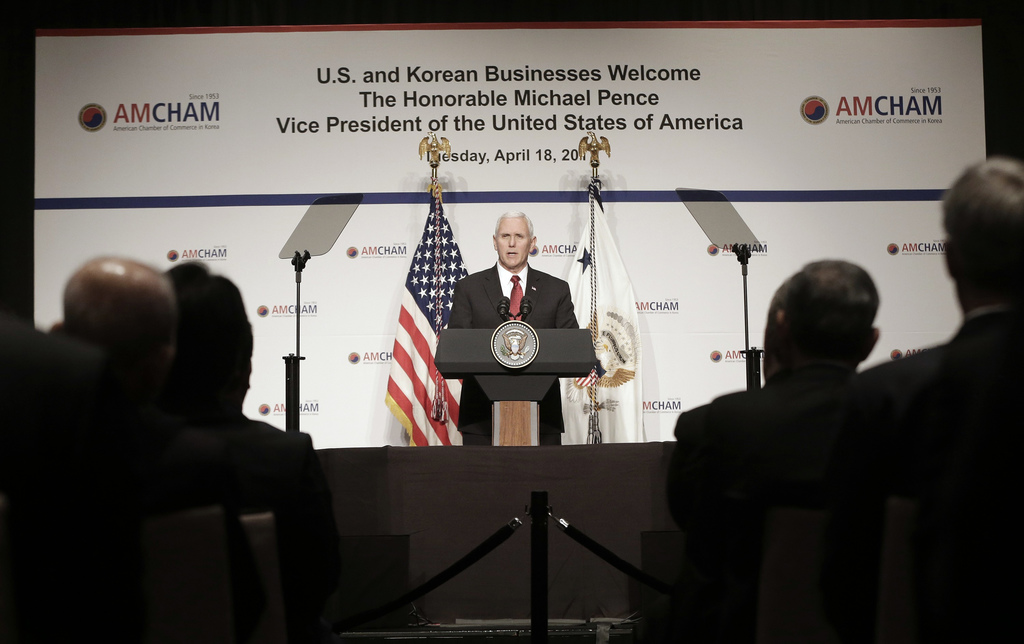 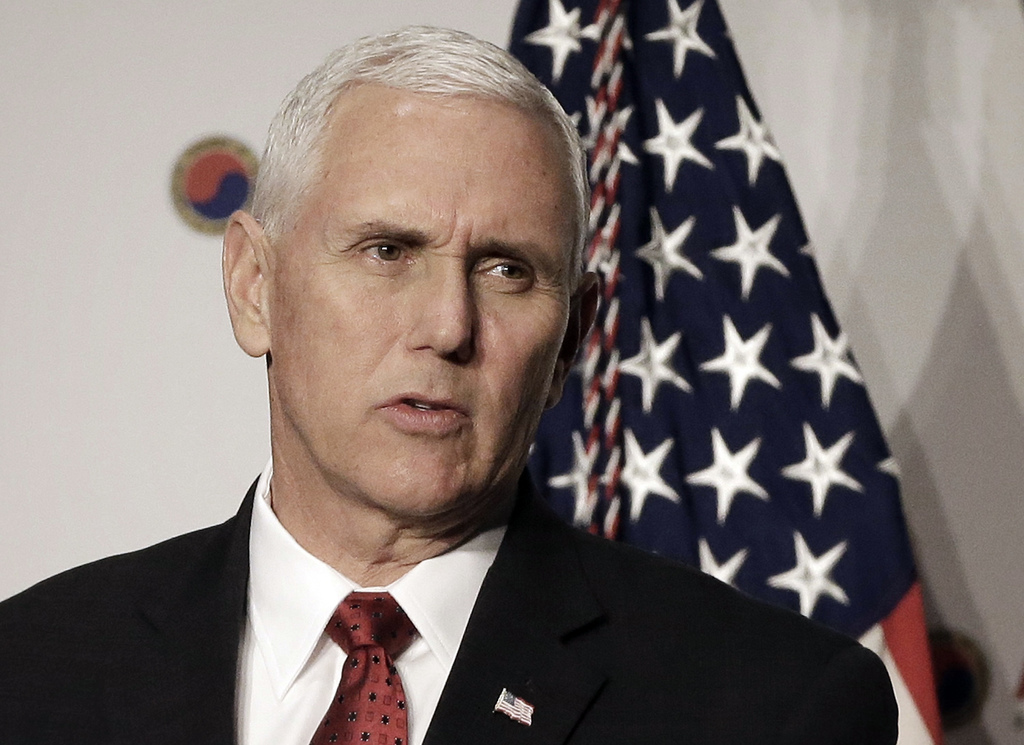 TOKYO (AP) — The U.S. will not relent until it achieves its objective of ensuring the Korean Peninsula is free of nuclear weapons, Vice President Mike Pence said Tuesday while visiting Japan.

After meetings with Prime Minister Shinzo Abe and other leaders, Pence told reporters that President Donald Trump was confident that economic and diplomatic pressure has a chance of compelling North Korea to cooperate.

"It is our belief by bringing together the family of nations with diplomatic and economic pressure we have a chance of achieving a freeze on the Korean Peninsula," Pence said.

"We will not rest and will not relent until we obtain the objective of a denuclearized Korean Peninsula," he said.

The Trump administration has signaled a more forceful U.S. stance toward North Korea's recent missile tests and threats, including a warning from Trump that North Korean leader Kim Jong Un has "gotta behave."

So Pence struck a stern tone after arriving at a U.S. naval base from South Korea.

"We appreciate the challenging times in which the people of Japan live with increasing provocations from across the Sea of Japan," he said. "We are with you 100 percent."

On Monday, Pence traveled to the tense Demilitarized Zone dividing North and South Korea, where he warned North Korea's leaders that after years of testing the U.S. and South Korea with its nuclear ambitions, "the era of strategic patience is over."

A senior North Korean official then accused the United States of bringing the countries to the brink of thermonuclear war.

Pence, on a 10-day Asia trip that will also take him to Indonesia and Australia, said Trump hopes China will use its leverage to get its longtime ally North Korea to give up its nuclear weapons program and ballistic missiles.

In Beijing, Chinese Foreign Minister Wang Yi made a fresh appeal for calm.

Wang told reporters that although U.S. officials have made clear that a military strike remains a possibility, he believes that Washington would still prefer to de-escalate tensions through multi-sided talks.

Abe said Japan likewise hopes for peaceful dialogue with Pyongyang, "but at the same time, dialogue for the sake of dialogue is valueless." Pressure on North Korea is crucial, the prime minister said.

After meeting with Abe, Pence held talks with Japanese Deputy Prime Minister Taro Aso on a new U.S.-Japan "economic dialogue" to be led by the two.

The new forum for trade talks was launched by Trump and Abe during the Japanese leader's visit to the U.S. in February. In part, it is meant to take the place of the Trans-Pacific Partnership, the regional trade pact that Trump withdrew from shortly after taking office.

Pence and Aso said they believed the dialogue could yield opportunities to create new jobs on both sides and to fortify the economic aspects of the alliance.

"We would like to seek the best shape and forum for our bilateral relationship," Pence said. "The TPP is a thing of the past for the United States of America."

He said Trump is certain that negotiating trade deals with individual countries was the best way to ensure they yield "win-win" situations for both sides.

The talks Tuesday did not delve into sector-by-sector issues such as auto exports. With no U.S. trade representative yet in office and other key positions still unfilled, such nitty-gritty discussions will have to come later.

The loss of U.S. participation in the Trans-Pacific Partnership was a blow to Japan following strenuous negotiations, especially over opening its long-protected farm sector to more imports, especially of dairy and meat products.

For now, both sides seem eager to downplay potential for conflict, with Aso repeatedly saying that trade friction has been vanquished in a "new era of cooperation."

As Indiana governor, Pence saw firsthand the impact of Japanese automakers Toyota, Honda and Subaru, whose factories employ thousands of people in his home state.