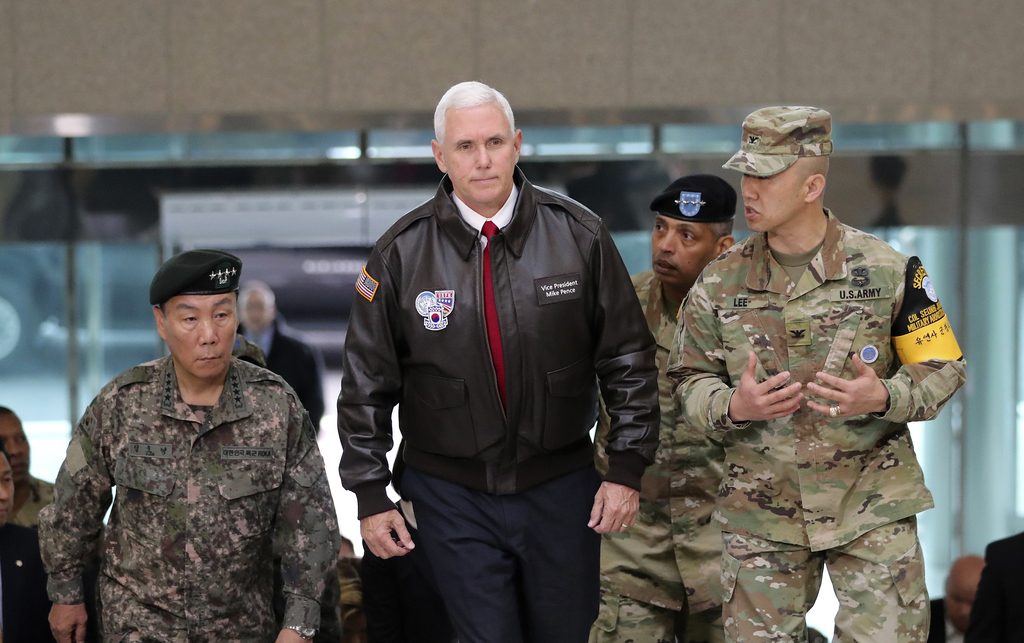 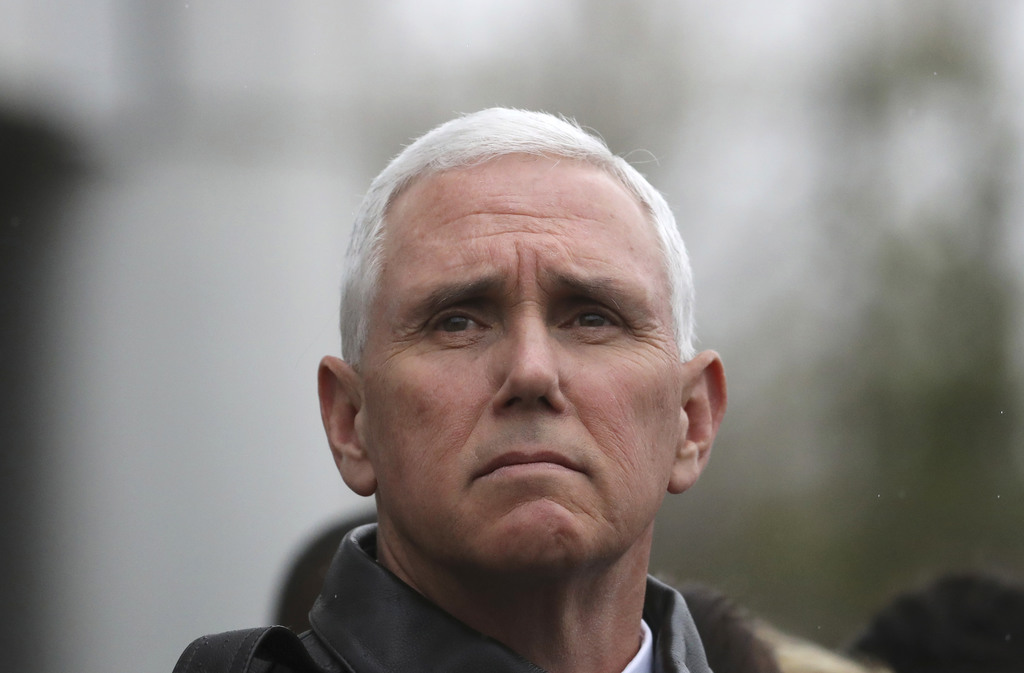 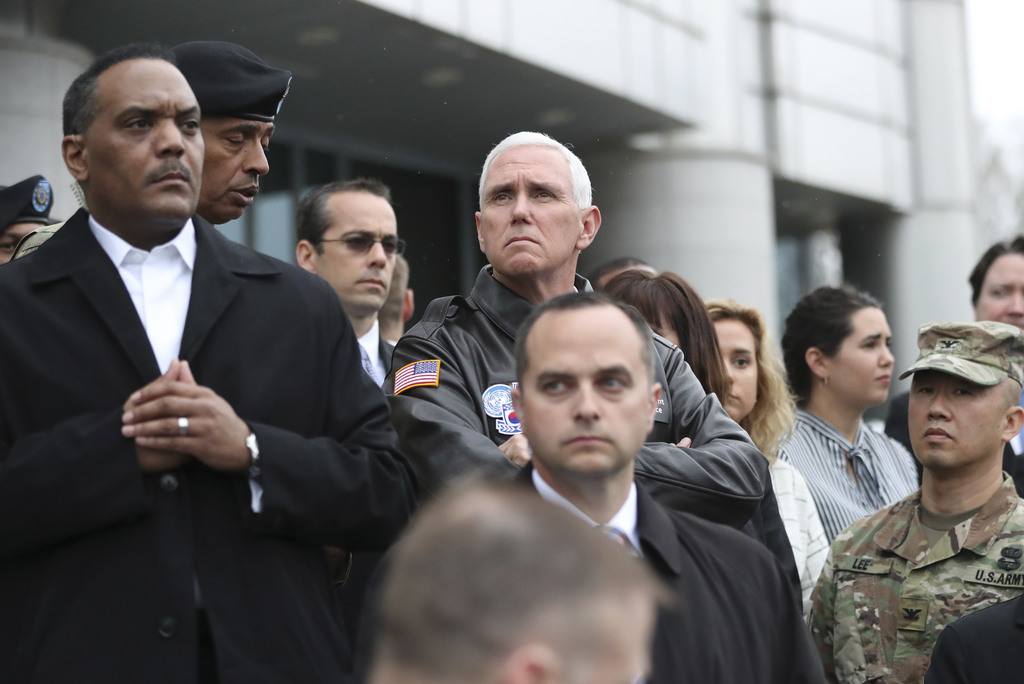 PANMUNJOM, South Korea (AP) — Viewing his adversaries in the distance, U.S. Vice President Mike Pence traveled to the tense zone dividing North and South Korea and warned Pyongyang that after years of testing the U.S. and South Korea with its nuclear ambitions, "the era of strategic patience is over."

Pence made an unannounced visit to the Demilitarized Zone at the start of his 10-day trip to Asia in a U.S. show of force that allowed the vice president to gaze at North Korean soldiers from afar and stare directly across a border marked by razor wire. As the brown bomber jacket-clad vice president was briefed near the military demarcation line, two North Korean soldiers watched from a short distance away, one taking multiple photographs of the American visitor.

Pence told reporters near the DMZ that President Donald Trump was hopeful that China would use its "extraordinary levers" to pressure the North to abandon its weapons program, a day after the North's failed missile launch. But Pence expressed impatience with the unwillingness of the regime to move toward ridding itself of nuclear weapons and ballistic missiles.

Pointing to the quarter-century since North Korea first obtained nuclear weapons, the vice president said a period of patience had followed.

"But the era of strategic patience is over," Pence declared. "President Trump has made it clear that the patience of the United States and our allies in this region has run out and we want to see change. We want to see North Korea abandon its reckless path of the development of nuclear weapons, and also its continual use and testing of ballistic missiles is unacceptable."

The vice president visited a military installation near the DMZ, Camp Bonifas, for a briefing with military leaders. He also met with American troops stationed at the joint U.S.-South Korean military camp, which is just outside the 2.5-mile (4.02-kilometer)-wide DMZ. Under rainfall, Pence later stood a few meters from the military demarcation line outside Freedom House, gazing at the North Korean soldiers across the border.

Meanwhile, Japanese Prime Minister Shinzo Abe, speaking to a parliamentary session Monday, said: "Needless to say, diplomatic effort is important to maintain peace. But dialogue for the sake of having dialogue is meaningless."

"We need to apply pressure on North Korea so they seriously respond to a dialogue" with the international community, he said, urging China and Russia to play more constructive roles on the issue. deforested stretch of North Korea from a lookout post in the hillside.

Pence's visit, full of Cold War symbolism, came amid increasing tensions and heated rhetoric on the Korean Peninsula. While the North did not conduct a nuclear test, the specter of a potential test and an escalated U.S. response has trailed Pence as he undertakes his Asian tour.

Trump wrote Sunday on Twitter that China was working with the United States on "the North Korea problem." His national security adviser, H.R. McMaster, said the U.S. would rely on its allies as well as Chinese leadership to resolve the issues with North Korea.

McMaster cited Trump's recent decision to order missile strikes in Syria after a chemical attack blamed on the Assad government, as a sign that the president "is clearly comfortable making tough decisions." But at the same time, McMaster said on "This Week" on ABC that "it's time for us to undertake all actions we can, short of a military option, to try to resolve this peacefully."

Pence told reporters that the North Korean people and military "should not mistake the resolve of the United States of America to stand with our allies," calling the alliance "iron-clad." He said the U.S. and its allies would deal with the situation "through peaceable means or ultimately by whatever means are necessary."

After a two-month policy review, the Trump administration settled on a policy dubbed "maximum pressure and engagement," U.S. officials said Friday. The administration's immediate emphasis, they said, was to be on increasing pressure on Pyongyang with the help of Beijing.

The officials weren't authorized to speak publicly on the results of the policy review and requested anonymity.

Pence sought to explain the policy in meetings with South Korea Acting President Hwang Kyo-ahn and other top officials in Seoul at the start of the trip, which will also include stops in Japan, Indonesia and Australia. He will aim to reassure allies in South Korea and Japan that the U.S. will take appropriate steps to defend them against North Korean aggression.

The concerns were exacerbated after a North Korean missile exploded during launch on Sunday, U.S. and South Korean officials said. The high-profile failure came as the North tried to showcase its nuclear and missile capabilities around the birth anniversary of the North's late founder and as a U.S. aircraft carrier neared the Korean Peninsula.

The Trump administration is hoping that China will help rein in North Korea in exchange for other considerations. Last week, Trump said he would not declare China a currency manipulator, pulling back from a campaign promise, as he looked for help from Beijing, which is the North's dominant trade partner.

"Why would I call China a currency manipulator when they are working with us on the North Korean problem? We will see what happens!" Trump tweeted on Sunday.

Along with the deployment of the U.S. aircraft carrier and other vessels into waters off the Korean Peninsula, thousands of U.S. and South Korean troops, tanks and other weaponry were deployed last month in their biggest joint military exercises. That led North Korea to issue routine threats of attacks on its rivals if they show signs of aggression.

The White House foreign policy adviser traveling with Pence told reporters that the type of missile that North Korea tried to fire on Sunday was medium-range, and that it exploded about 4 to 5 seconds after it was launched.

The North regularly launches short-range missiles, but is also developing mid-range and long-range missiles meant to target U.S. troops in Asia and, eventually, the U.S. mainland.