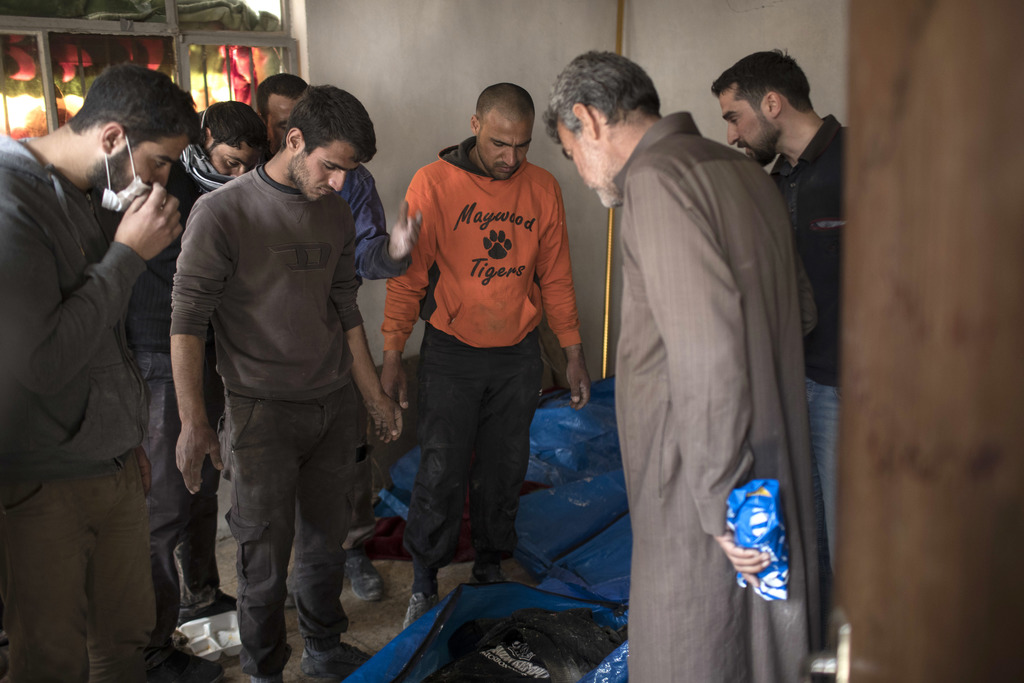 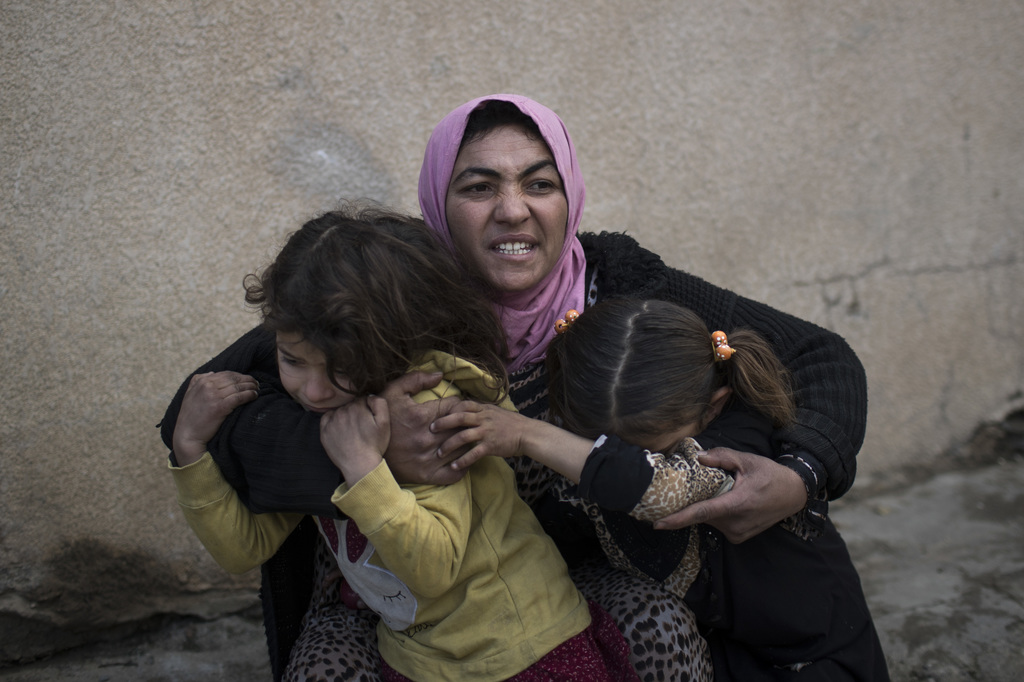 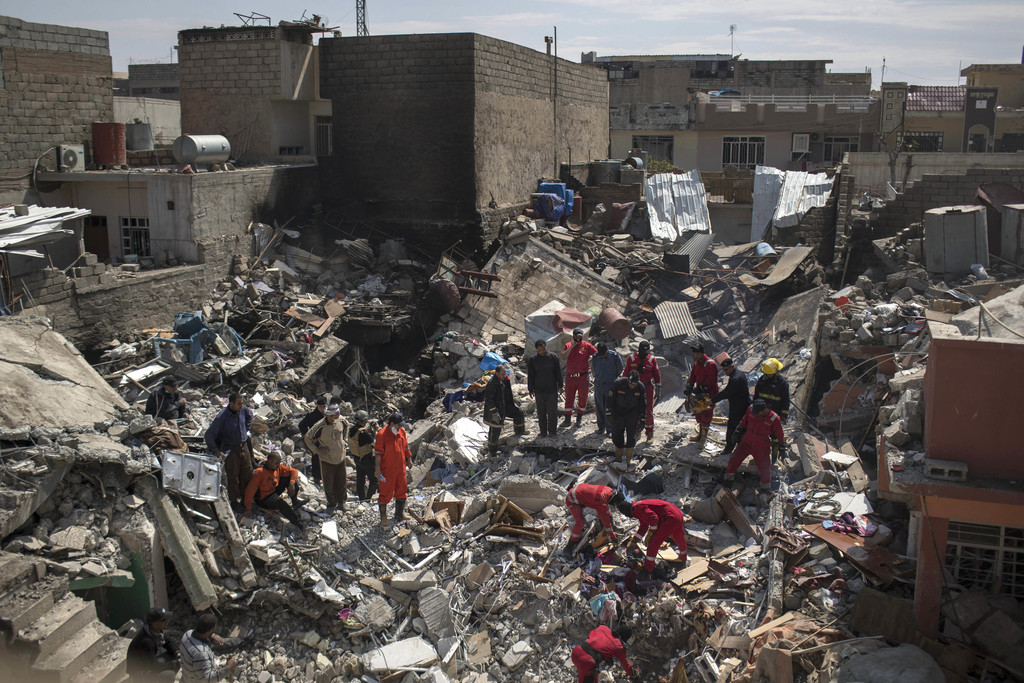 BAGHDAD (AP) — Islamic State group and al-Qaida-linked militants are quickly moving to drum up outrage over a sharp spike in civilian casualties said to have been caused by U.S. airstrikes in Iraq and Syria, posting photos online of a destroyed medical center and homes reduced to rubble. "This is how Trump liberates Mosul, by killing its inhabitants," the caption reads.

The propaganda points to the risk that rising death tolls and destruction could undermine the American-led campaign against the militants.

During the past two years of fighting to push back the Islamic State group, the U.S.-led coalition has faced little backlash over casualties, in part because civilian deaths have been seen as relatively low and there have been few cases of single strikes killing large numbers of people. In Iraq — even though sensitivities run deep over past American abuses of civilians — the country's prime minister and many Iraqis support the U.S. role in fighting the militants.

That has the potential to undercut victories against the militants and stoke resentments that play into their hands.

In Syria, as fighting around Raqqa intensified, civilian fatalities from coalition airstrikes rose to 198 in March — including 32 children and 31 women — compared to 56 in February, according to the Syrian Observatory for Human Rights, which documents Syria's war. Over the course of the air campaign, from September 2014 through February, an average of 30 civilians were killed a month, according to the Observatory.

The U.S. military is investigating what role the U.S. played in the March 17 airstrike in Mosul, and American and Iraqi officials have said militants may have deliberately gathered civilians there and planted explosives in the building. The blast left an entire residential block flattened, reducing buildings to mangled concrete.

Among those who lost loved ones, resentment appears to be building toward the U.S.-led coalition and the ground forces it supports.

"How could they have used this much artillery on civilian locations?" asked Bashar Abdullah, a resident of the neighborhood known as New Mosul, who lost more than a dozen family members in the March 17 attack. "Iraqi and American forces both assured us that it will be an easy battle, that's why people didn't leave their houses. They felt safe."

U.S. officials have said they are investigating other claims of casualties in Syria and Iraq.

Islamic State group fighters have overtly used civilians as human shields, including firing from homes where people are sheltering or forcing people to move alongside them as they withdraw.

Now, the group is using the deaths in its propaganda machine.

Photos recently posted online on militant websites showed the destruction at the Mosul Medical College with a caption describing the Americans as the "Mongols of the modern era" who kill and destroy under the pretext of liberation. A series of pictures showing destroyed homes carried the comment: "This is how Trump liberates Mosul, by killing its inhabitants under the rubble of houses bombed by American warplanes to claim victory. Who would dare say this is a war crime?"

In Syria, IS and other extremist factions have pushed the line that the U.S. and Russia, which is backing President Bashar Assad's regime, are equal in their disregard for civilian lives.

U.S. "crimes are clear evidence of the 'murderous friendship' that America claims to have with the Syrian people, along with its claimed concern for their future and interests," said the Levant Liberation Committee, an al-Qaida-led insurgent alliance.

Some Syrian opposition factions allied with the U.S. have also criticized the strikes, describing them as potential war crimes.

An analysis by the Soufan Group consultancy warned that rumors and accusations of coalition atrocities "will certainly help shape popular opinion once Mosul and Raqqa are retaken, thus serving a purpose for the next phase of the Islamic State's existence."

Criticism has also come from Russian officials, whose military has been accused of killing civilians on a large scale in its air campaign in Syria, particularly during the offensive that recaptured eastern Aleppo from rebels late last year.

"I'm greatly surprised with such action of the U.S. military, which has all the necessary equipment and yet were unable to figure out for several hours that they weren't striking the designated targets," Russian Foreign Minister Sergey Lavrov said, speaking at the U.N. Security Council about the March 17 strike.

Joseph Scrocca, a spokesman for the U.S.-led coalition, acknowledged the spike in civilian casualty reports could change the way the coalition is conducting the war. He said it was a "very valid" concern that loss of life and destruction could play into the hands of IS or cause some coalition members to waver.

"But the coalition is not going to back down when (the fight) gets hard or there's a lot of pressure," he said. "That's what ISIS wants."

In Syria, the deadliest recent strike occurred earlier this month in a rebel-held area in the north. Opposition activists said a mosque was hit during evening prayers, killing around 40 people, mostly civilians, and wounding dozens of others. The U.S. said it struck an al-Qaida gathering across the street from the mosque, killing dozens of militants, adding they found no basis for reports that civilians were killed.

In Mosul, the scale of destruction wrought by increased artillery and airstrikes is immense in some areas.

Abdullah, the resident of New Mosul, buried 13 members of his family in a single day.

Standing in a field now being used as a graveyard, he said: "This was not a liberation. It was destruction."