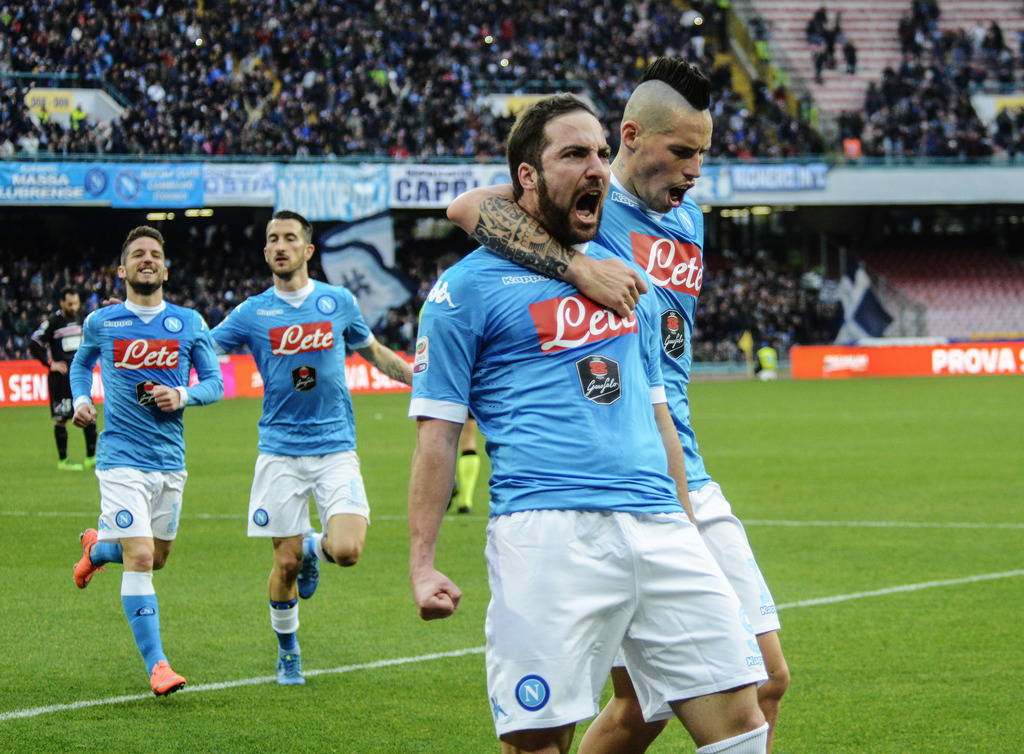 MILAN (AP) — Gonzalo Higuain will face the wrath of a scorned lover when he returns to Napoli for the first time since his move to bitter rival Juventus.

The love Napoli fans had for Higuain swiftly turned to hatred following his transfer for an Italian-record 90 million euros ($100 million) after scoring 36 goals last season to break a 66-year-old Serie A record.

This is the first chance Napoli fans have had to vent their animosity at their former hero, as they were banned from attending the reverse fixture for security reasons. Higuain's reception is expected to include a barrage of whistles and insults.

"I don't know what kind of welcome he will get," Napoli coach Maurizio Sarri said.

"Normally the Napoli fans are very generous. There have been moments of anger but those derived from the jealousy of those who felt a bit betrayed.

"But it has always been love. Higuain made history at Napoli; no other player has scored more than him in a league campaign. That pleased us so much in that season, and at the end the fans will recognize him for that."

With 71 league goals in 104 Serie A matches for Napoli in the past three seasons, Higuain's popularity in Naples was beginning to approach that of Diego Maradona, his fellow Argentine who led Napoli to its only two league titles in 1987 and 1990.

When the transfer was announced in July, Napoli fans publicly threw their Higuain shirts, banners, and scarves into the trash.

Outside San Paolo Stadium at Napoli matches this season, vendors sell toilet paper with Higuain's image printed on it, while his injury earlier this season was widely celebrated in Naples, with one restaurant even offering pizzas at 99 cents to celebrate the player's misfortune.

All this adds spice to one of the most fiercely contested fixtures in Italy, which will be played twice in quick succession. The league match on Sunday is followed three days later by the return leg of their Italian Cup semifinal.

Security has been stepped up, and it is partly down to safety fears that Juventus is not staying in Naples between the fixtures.

Juventus goalkeeper Gianluigi Buffon hopes all the focus will stay on the pitch.

"Higuain will be honored by Sarri's words, but there is a match to be played, a post-match to manage well," Buffon said. "Napoli-Juventus is too important an advert for Italian football to get lost in small or paltry matters, which don't help anyone.

"Napoli plays some of the best football in the world. A lot of credit should go to the coach and the players. We'll face a fearsome Napoli with the right enthusiasm, and with the attention that a great team deserves."

Napoli is third in Serie A, two points behind Roma and 10 behind Juventus. It trails 3-1 in the cup.

Sarri beat Juventus counterpart Massimilano Allegri to the coach of the year award, winning by three votes, and will be hoping for that to be evident on the pitch.

"For once at least, I beat Max. It's nice, even if it doesn't mean that Napoli-Juve will start from 1-0 to us," Sarri said. "Unfortunately on the pitch, Juve's values are tremendously high, it is a very strong team and beating it is always very difficult.

"Whatever formation Juventus puts out it is always the strongest in Italy. Unfortunately, we can but hope that they fall away in the next few years."