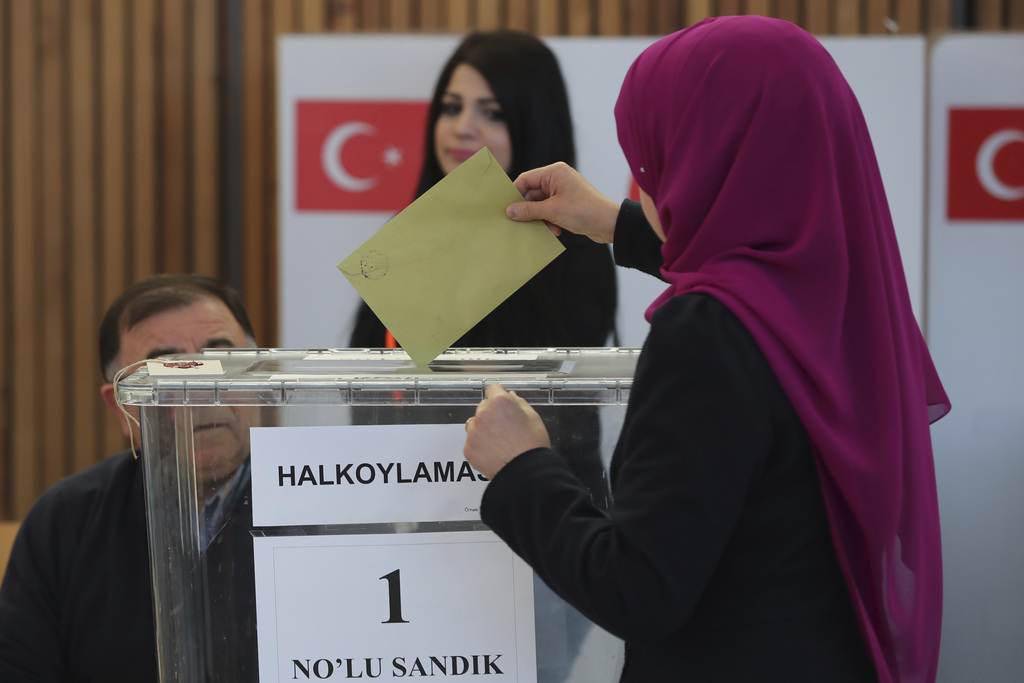 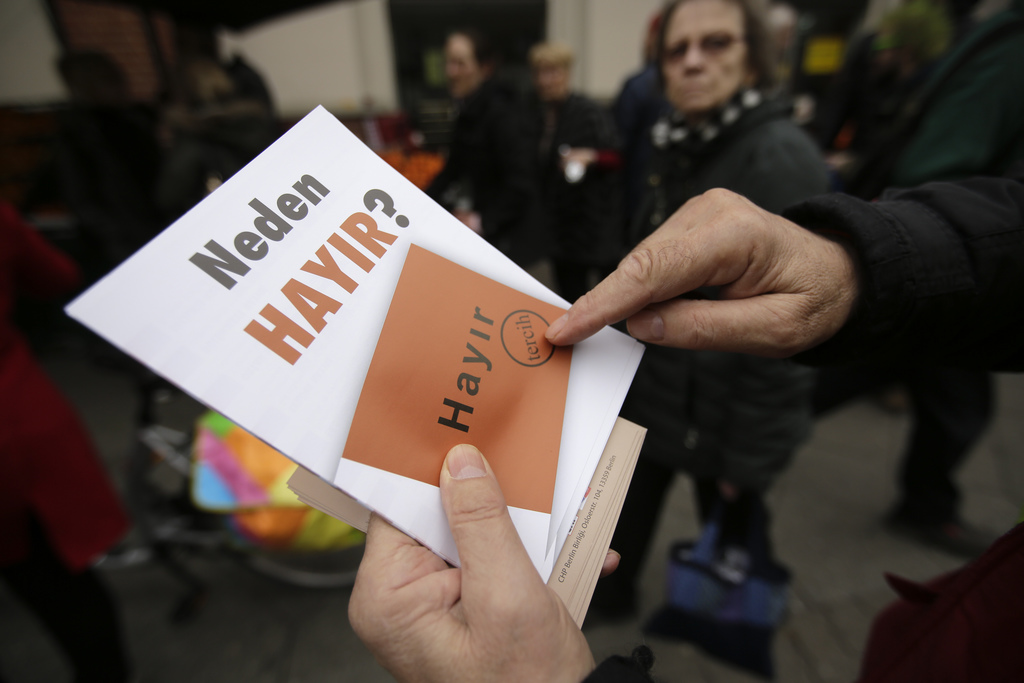 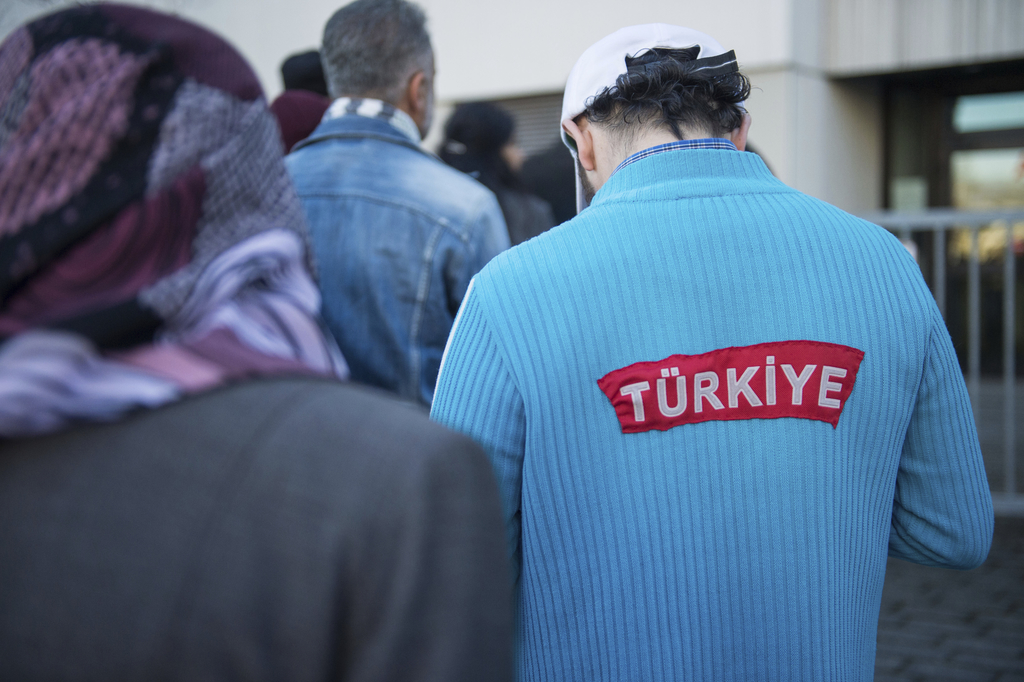 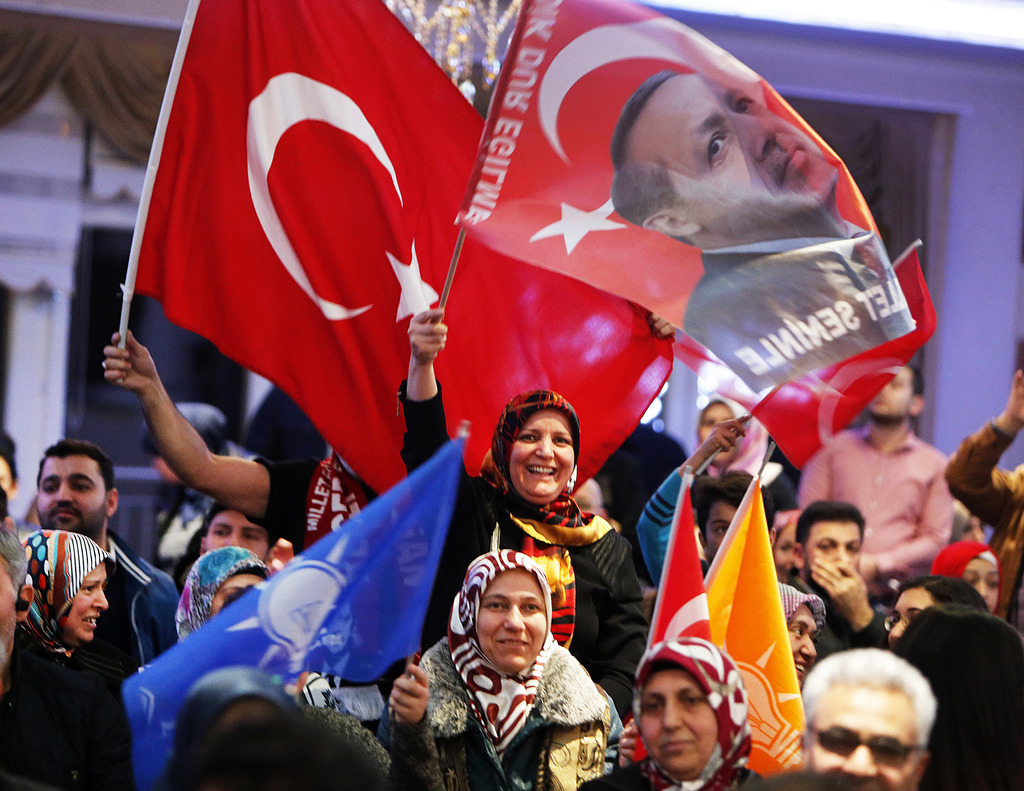 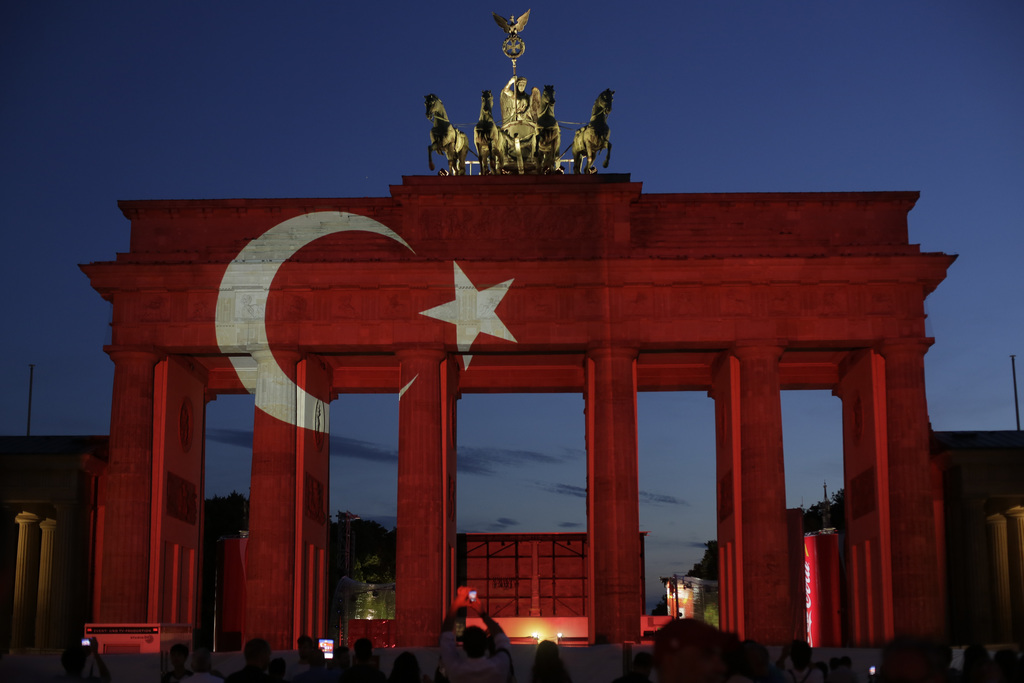 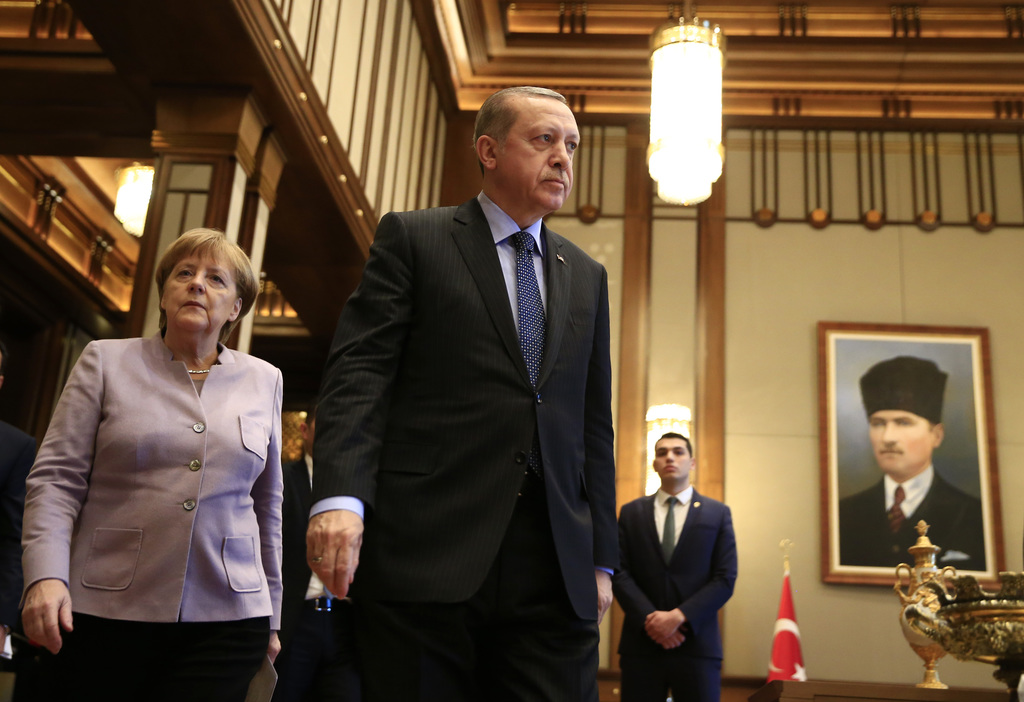 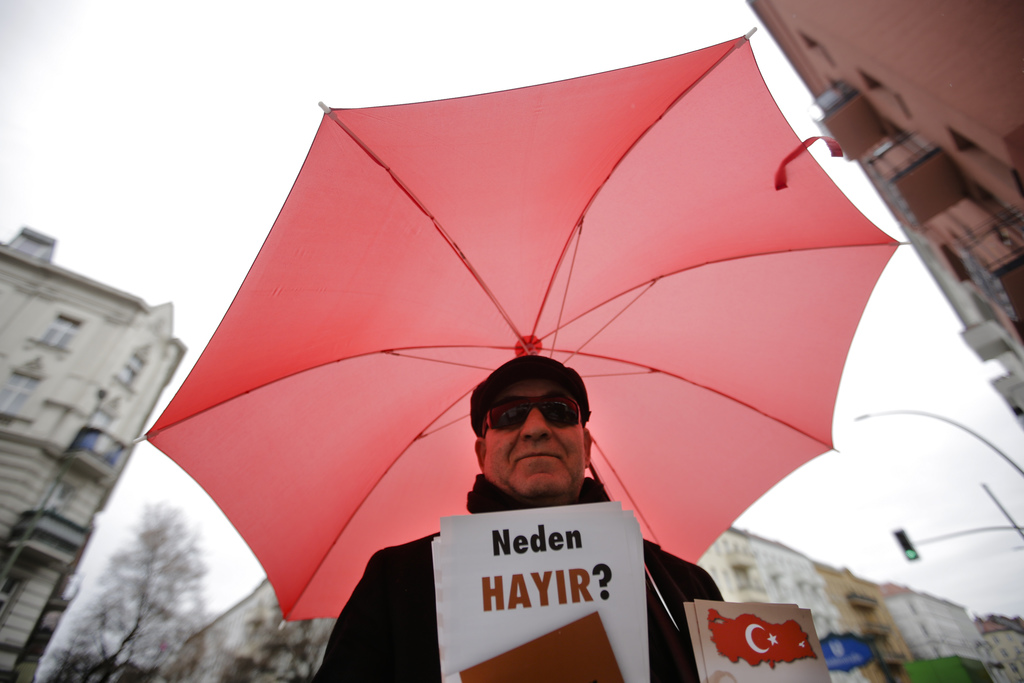 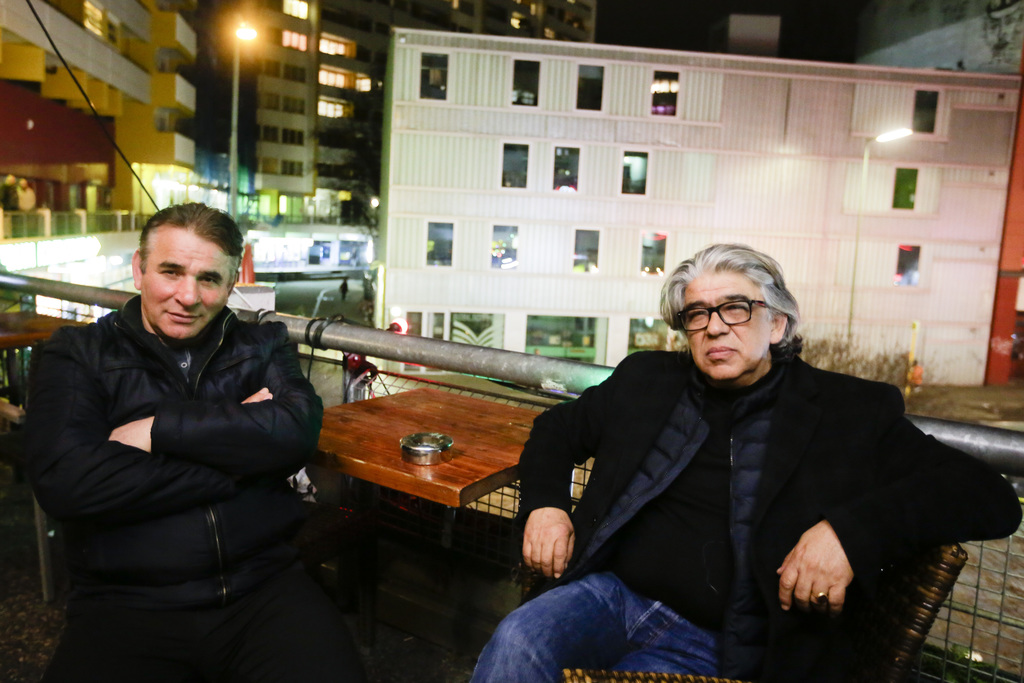 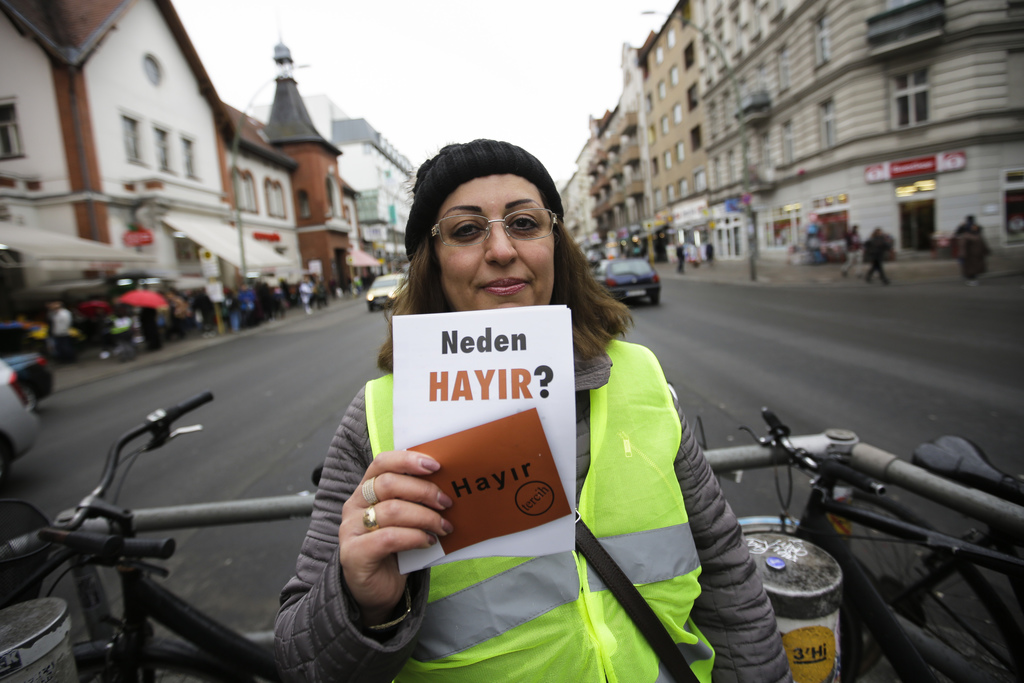 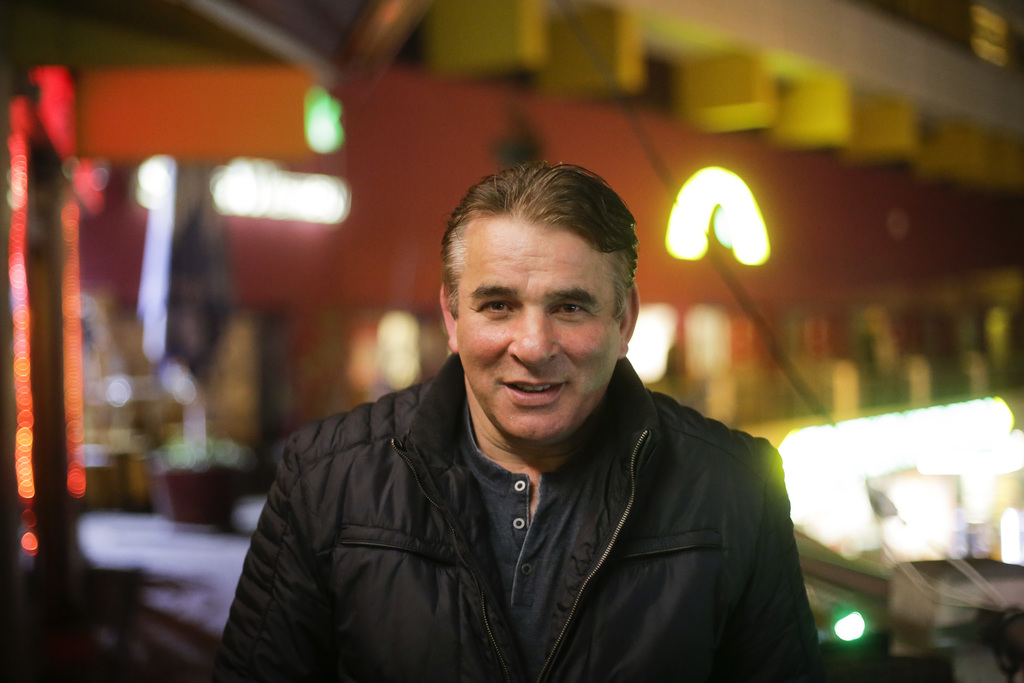 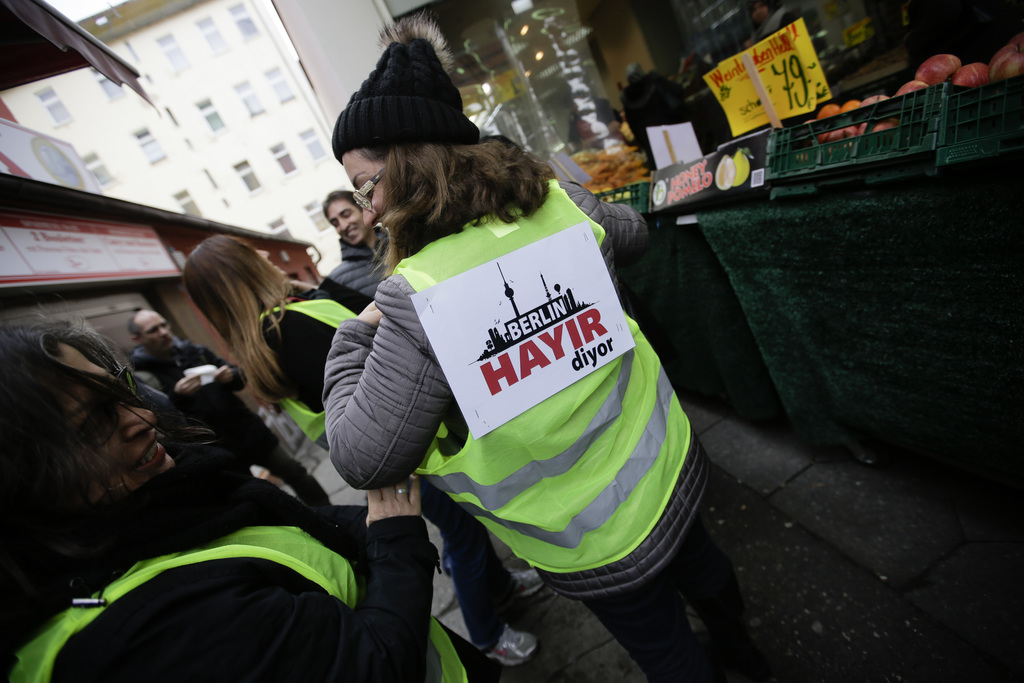 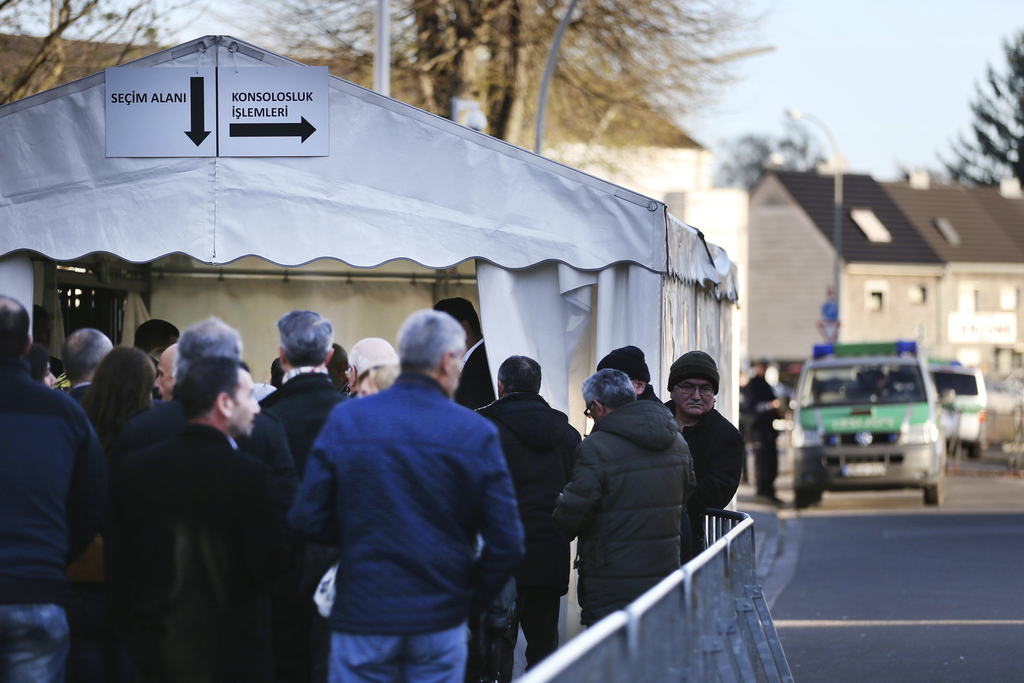 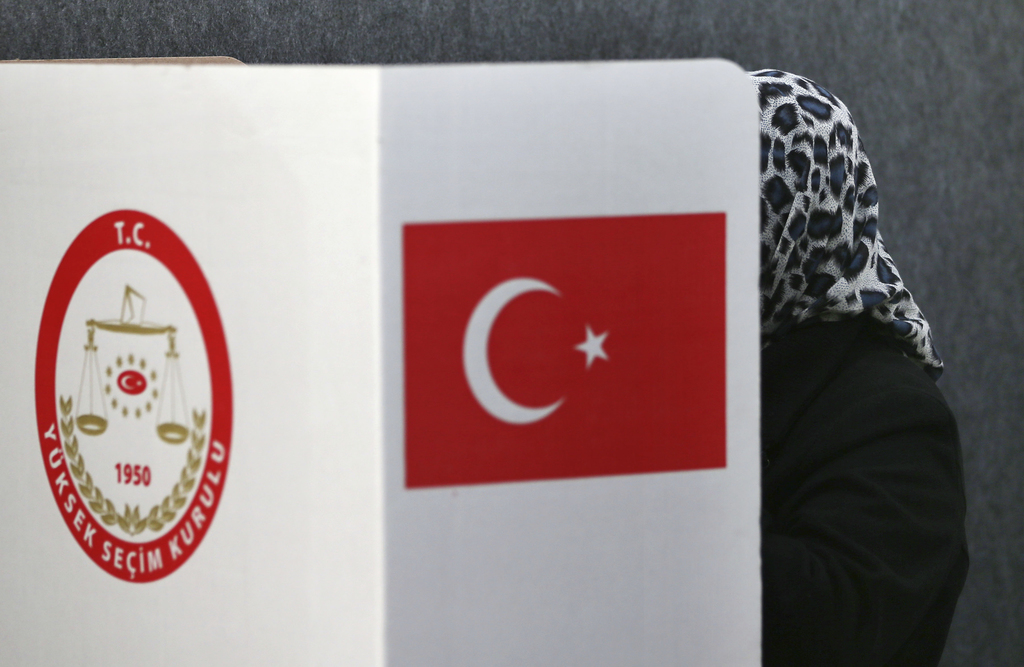 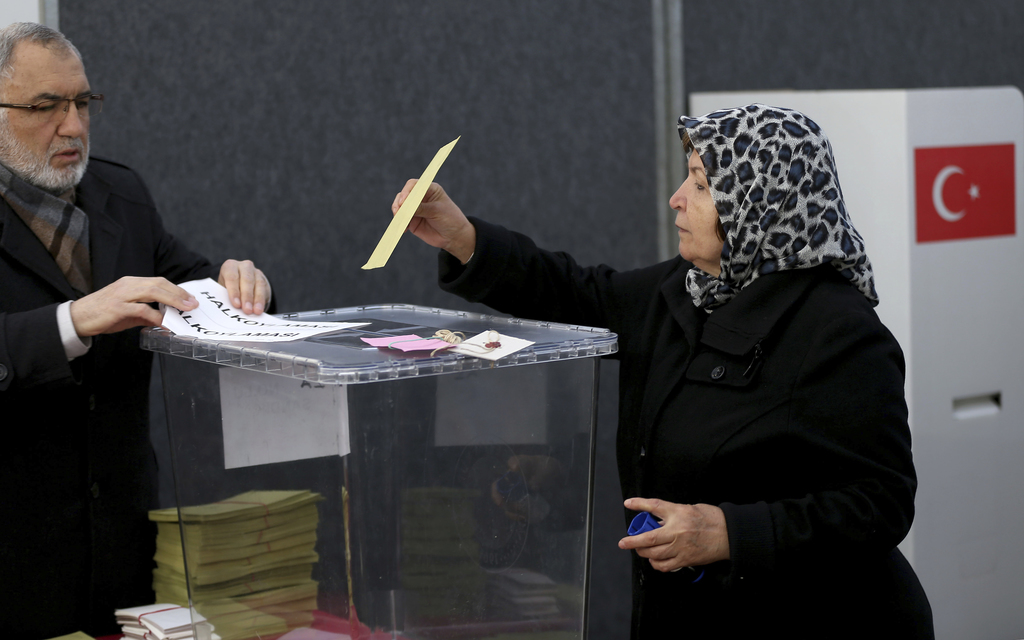 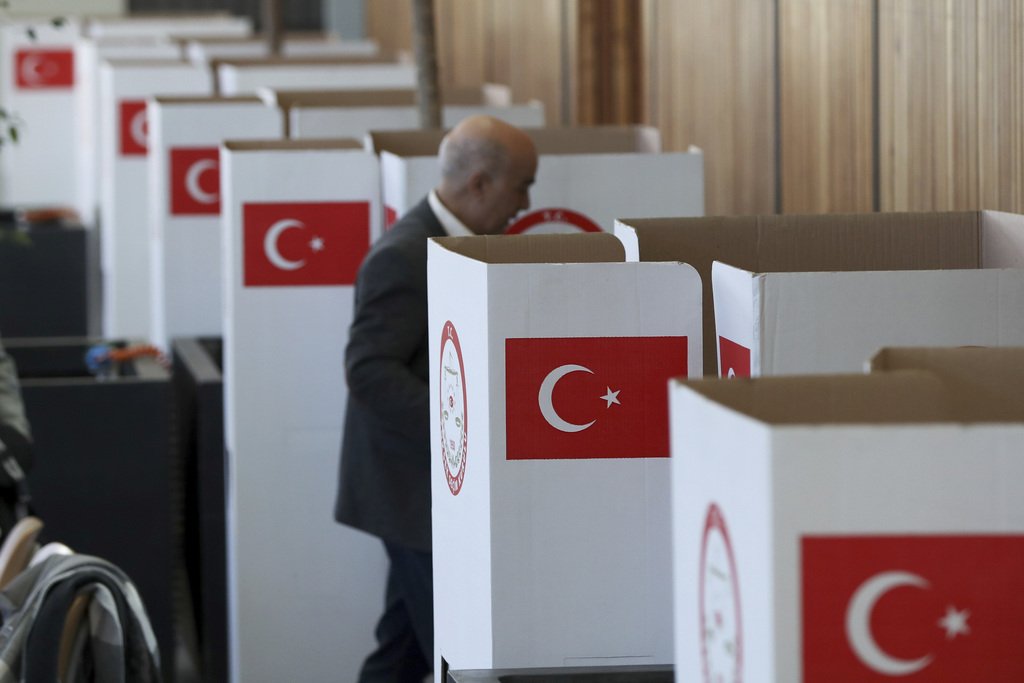 BERLIN (AP) — As polling stations opened Monday in Germany, acrimony has been rising among the Turks here whose votes are crucial in the tight race over whether to expand the powers of Turkish President Recep Tayyip Erdogan.

The 1.4 million eligible Turkish voters in Germany represent about half the total number of expatriates who can cast ballots, and the fight for their support has been fierce.

So far the headlines have focused on tensions between the two leaders. Erdogan, who has been trying to woo the Turks in Germany with rallies and rhetoric, has accused German officials of acting like Nazis for blocking his supporters from holding rallies ahead of the referendum. The move infuriated many in Germany, prompting Chancellor Angela Merkel to threaten that Berlin will take "all necessary measures" unless he stops the comparisons.

But the referendum has also polarized the 3 million-strong Turkish community in Germany more than anything in its 60-year history, said Caner Aver, an expert from the Center for Turkey Studies in the western German city of Essen.

"Erdogan appeals to people who feel discriminated against, people who couldn't find their place in Germany, who have a bad job, a bad education and problems with their own identity," Aver said.

He added the Turkish president has managed to succeed in giving such people a sense of pride as Turks — even if they have never lived in Turkey and often have an idealized, unrealistic idea of the country their parents or grandparents came from.

The absentee balloting in Germany began Monday and runs until April 9 at 13 different polling stations across the country, while the referendum inside Turkey takes place on April 16.

For weeks, advocates and opponents of the referendum have campaigned determinedly across Germany, handing out flyers in front of mosques and trying to persuade fellow Turks in emotional debates at tea rooms or kebab restaurants. Thousands have also attended campaign rallies with politicians flown in from Turkey — whose cancellation in some cities prompted Erdogan's remarks about "Nazi methods."

Ayfer Inci-Pekoz stood in the pouring rain for hours, clad in a neon-yellow vest with the Turkish slogan "Berlin hayir diyor (Berlin says no)," handing out flyers in front of a Turkish grocery market in the city's bustling Neukoelln neighborhood.

Reactions to her efforts were mixed. An elderly worker at the store who was sorting red apples mumbled, "I'm with you, my friend. You don't need to convince me." Yet a young male driver in a flashy car passing by took a flyer, then tore it into pieces immediately and shouted expletives at her.

Inci-Pekoz, a Turkish-born real estate agent who now has German citizenship herself and can't vote, shrugged and turned to two veiled young mothers with strollers. They refused to take the flyers, saying they'd already decided to vote for Erdogan.

"I've always been political and fought for women's rights and democracy," the 45-year-old Inci-Pekoz said. "This referendum scares me. I think if Erdogan wins it will further erode democracy in Turkey."

A "yes' vote in the referendum would grant the president the power to appoint government ministers and senior officials, appoint half of the members in the country's highest judicial body, declare states of emergency and issue decrees.

Senol Akkaya, a 56-year-old building contractor who immigrated to Germany as a child, said he was upset when Erdogan insulted Merkel and he now has a dilemma, since he is a fan of both leaders. He likes Merkel for her no-nonsense attitude and experience as a world leader but he also supports Erdogan, listing what he sees as the president's achievements like building better infrastructure in Turkey and standing up for Turkish immigrants abroad.

It has been Erdogan, Akkaya says, who has given Germany's former "guest workers" — Turks and others recruited in the 1960s by German companies to help rebuild the country after World War II — a new sense of pride.

"People here almost feel guilty if they want to vote 'Yes,'" said Akkaya, sipping tea and smoking cigarettes with friends on both sides of the referendum debate in a cafe in Berlin's Kreuzberg district, where many Turkish immigrants live.

"There's this obsession in Germany now, that if you're for Erdogan, it automatically means you're anti-democratic," he said.

His friend, Ercan Yasaroglu, who runs the Cafe Kotti where they were sitting, is critical of Erdogan's desire to merge the powers of the prime minister and the president. He said the tensions surrounding the Turkish referendum have not only poisoned the atmosphere within the Turkish community but also pitted Germans against Turks.

He says not only have Erdogan's Nazi comments upset many Germans, but the referendum for some is seen as a test of immigrants' support for European democratic values and their loyalty toward the countries they or their relatives immigrated to.

"Democracy means also to tolerate the opinions of your opponents," Yasaroglu said. "We've all done a pretty bad job at this recently. Let's try to focus again on what we all have in common, on our humanity, and on building bridges instead of tearing them down."