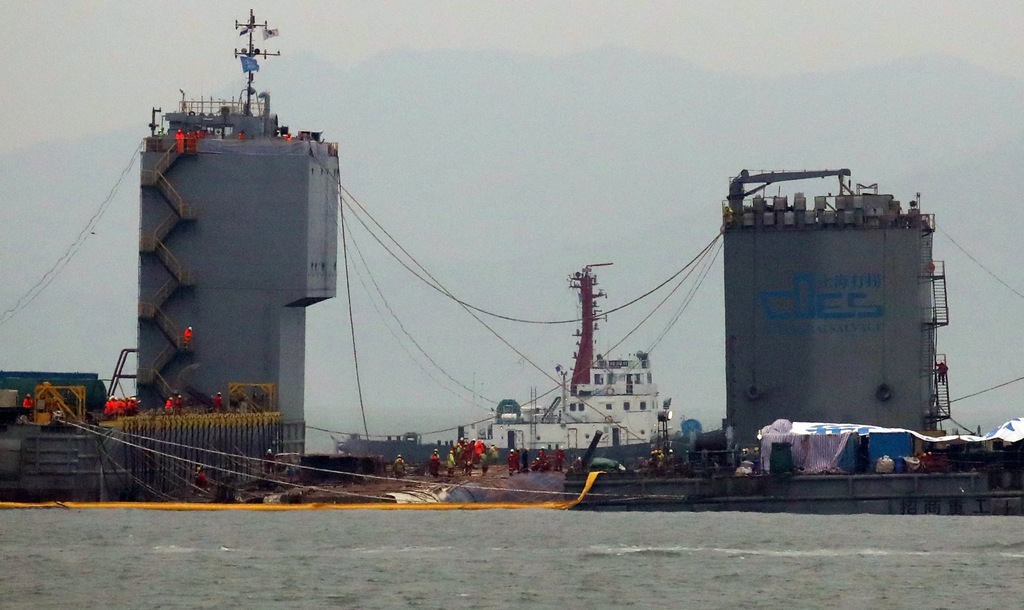 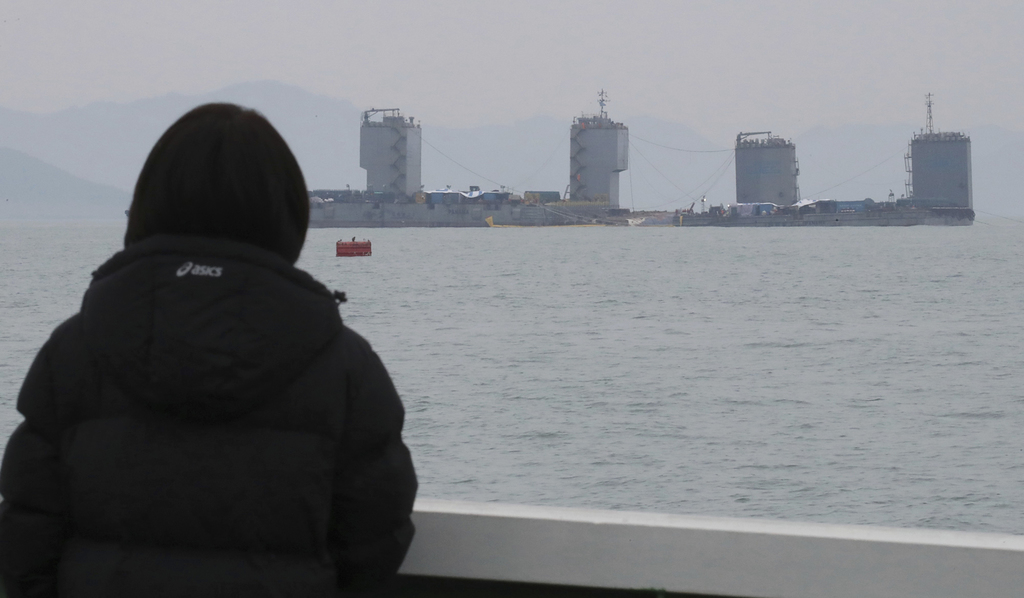 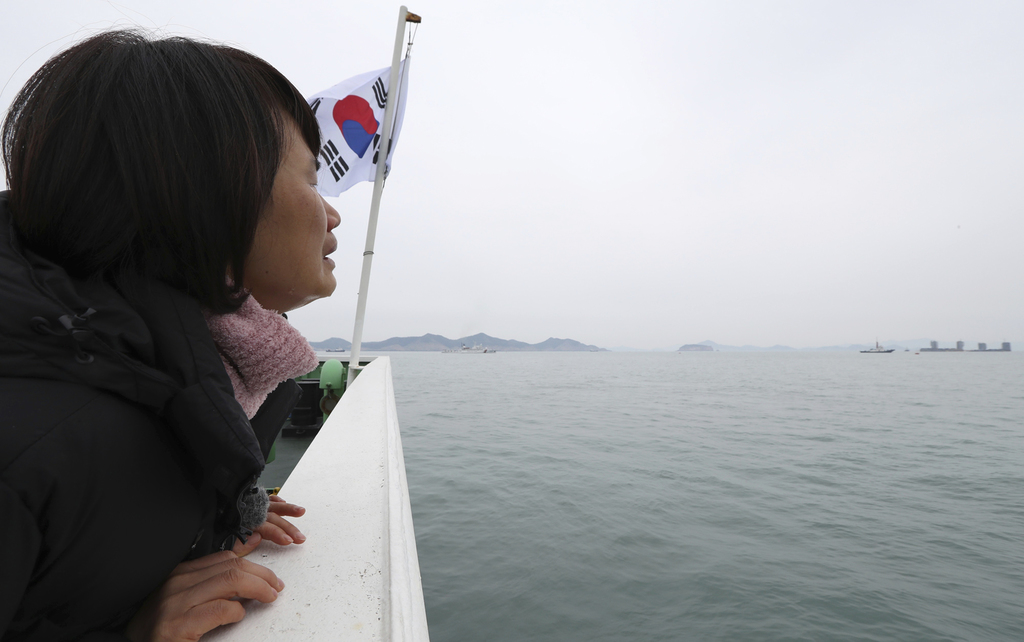 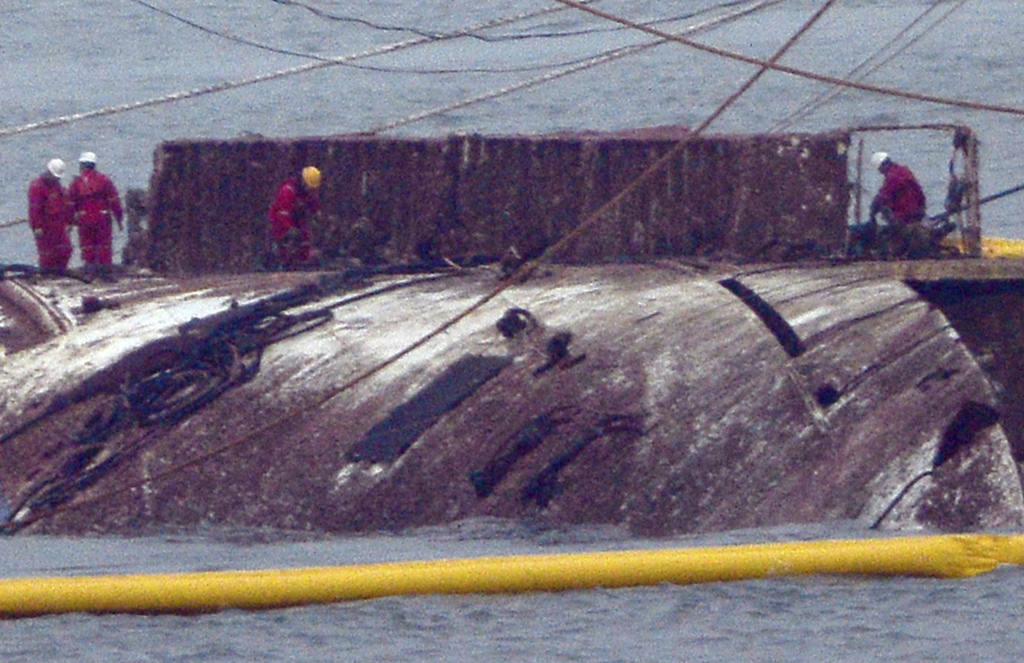 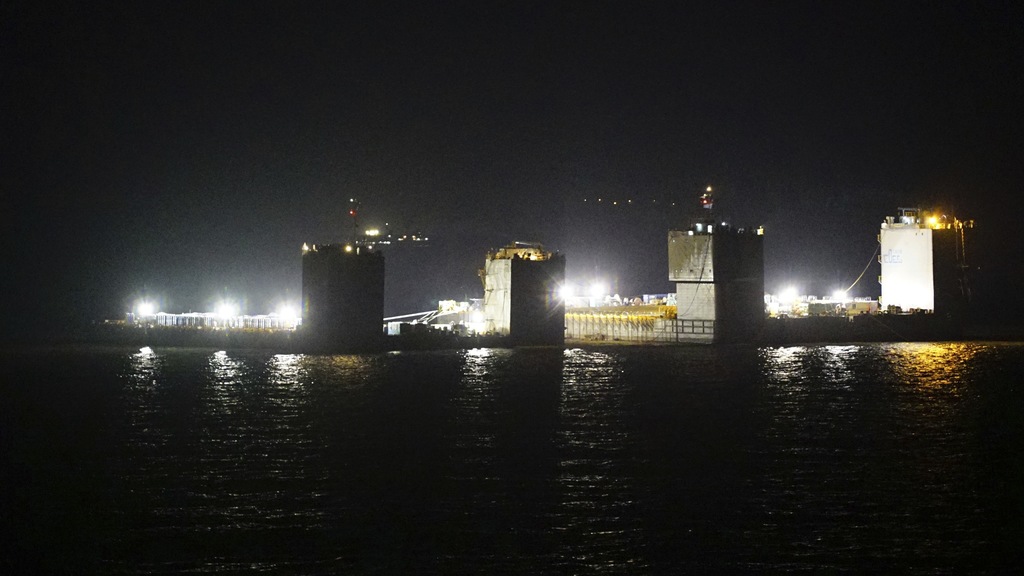 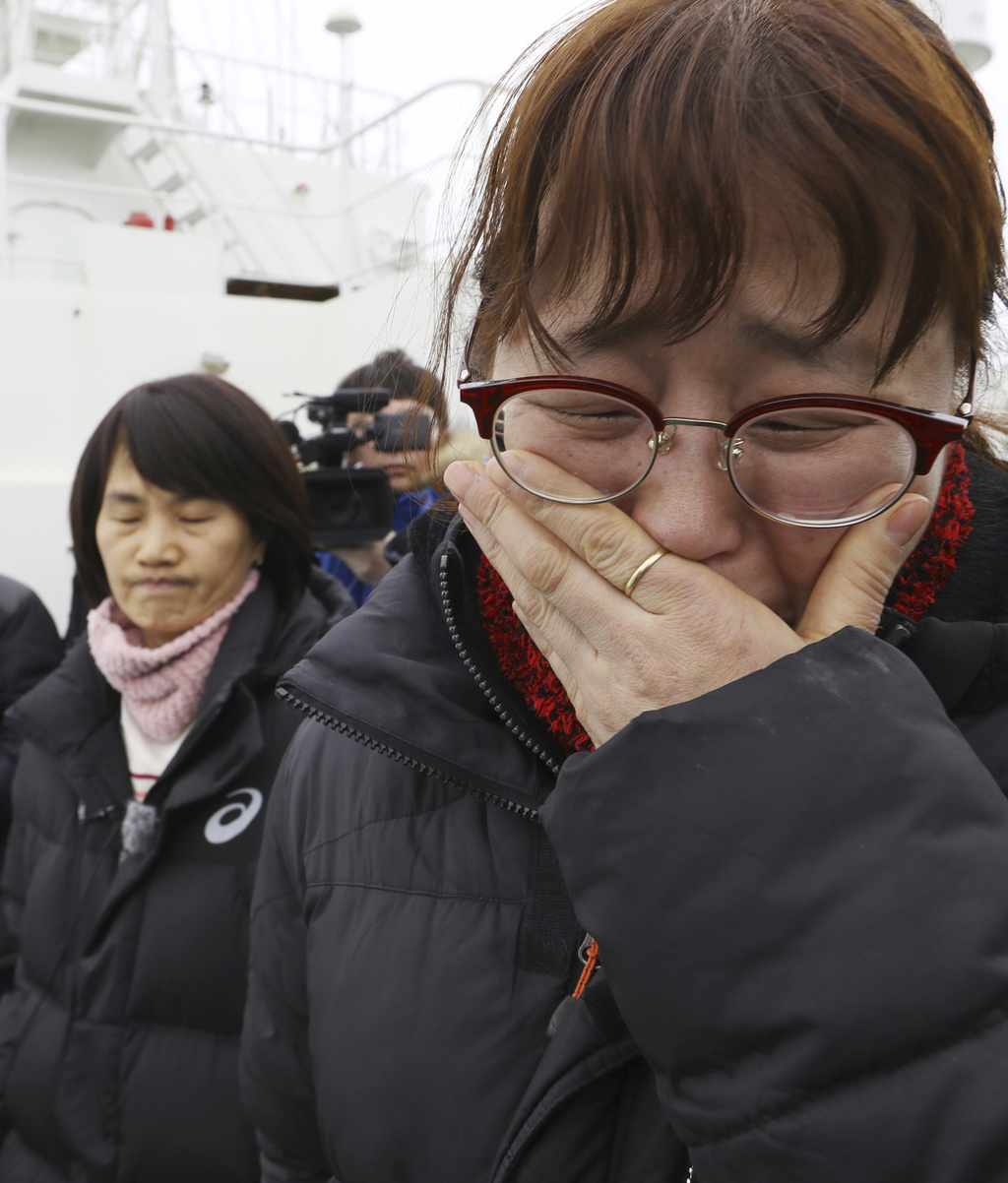 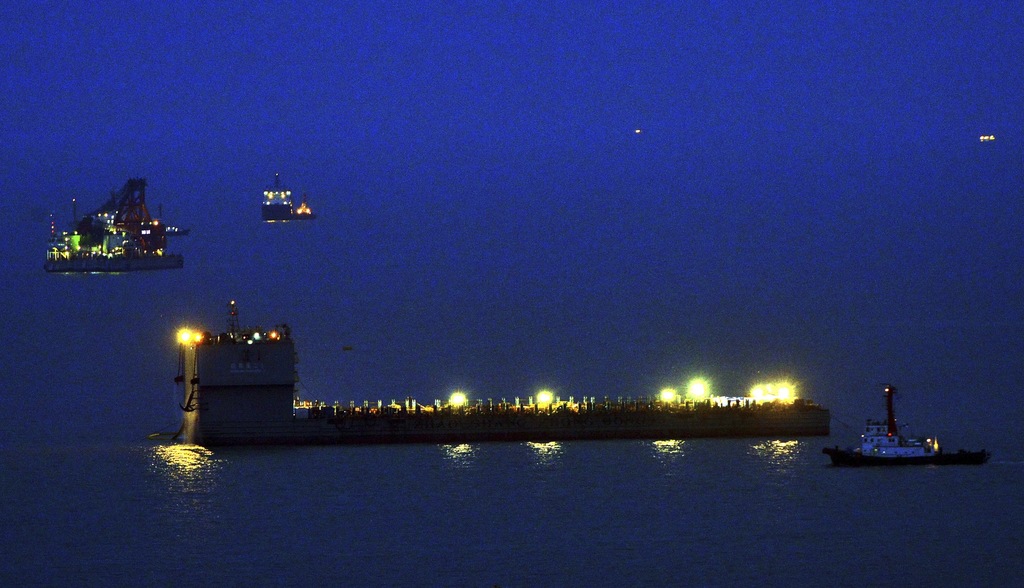 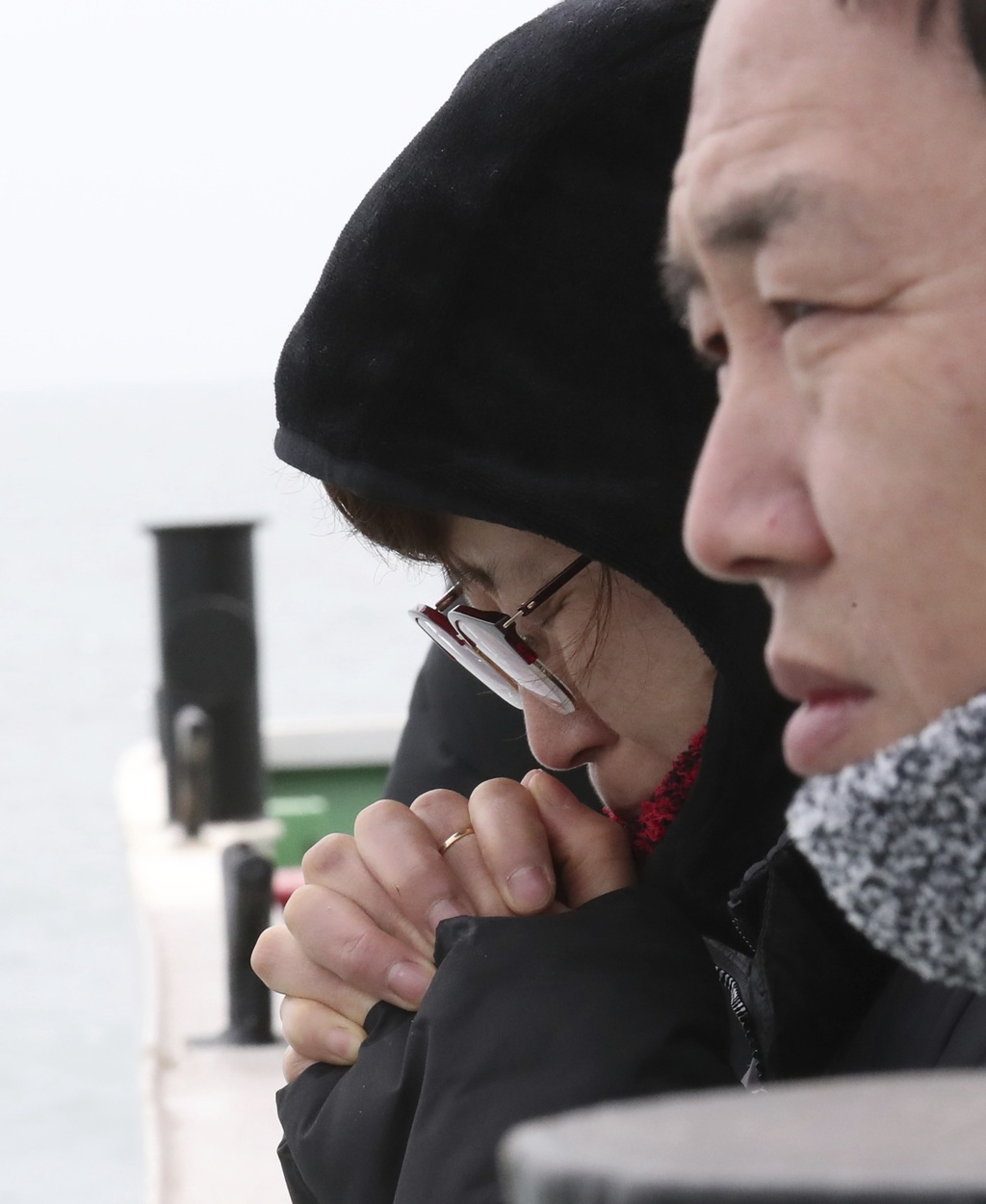 SEOUL, South Korea (AP) — A 6,800-ton South Korean ferry emerged from the water on Thursday, nearly three years after it capsized and sank into violent seas off the country's southwestern coast, an emotional moment for the country that continues to search for closure to one of its deadliest disasters ever.

More than 300 people — most of whom were students on a high school trip — died when the Sewol sank on April 16, 2014, touching off an outpouring of national grief and soul searching about long-ignored public safety and regulatory failures. The public outrage over what was seen as a botched rescue job by the government contributed to the recent ouster of Park Geun-hye as president.

Workers on two barges began the salvaging operation Wednesday night, rolling up 66 cables connected to a frame of metal beams divers spent months putting beneath the ferry, which had been lying on its left side in about 44 meters (144 feet) of water.

By 3:45 a.m., Sewol's stabilizer surfaced from the water. About an hour later, the blue-and-white right side of ferry, rusty and scratched and its name "SEWOL" no longer visible from where it was, emerged for the first time in more than 1,000 days.

By about 7 a.m., the ferry had been raised enough for workers to climb on it and further fasten it to the barges. As of 2 p.m., the top of the ferry was about six meters (19 feet) above the water surface.

Lee Cheoljo, an official from the Ministry of Oceans and Fisheries, told reporters that workers will need until late afternoon or the evening to raise the ferry until its upper side is about 13 meters (42 feet) above the surface.

Workers had initially planned to do this by Thursday morning, but were forced to a temporarily halt when the ferry began rubbing against pulleys and other equipment on the barges as it came up, Lee said. They resumed lifting the ferry after spending hours on operations to better balance it.

Once Sewol is raised to the desired point, salvage crews will then load the ferry onto a semi-submersible, heavy-lift vessel that will carry it to a mainland port. The loading process, including emptying the ferry of water and fuel, is expected to take days.

The bodies of 295 passengers were recovered after the sinking on April 16, 2014, but nine are still missing. Relatives, some of whom who are watching from two fishing boats just outside the operation area, are hoping that those remains will be found inside the ferry.

"I can see it. I can see where my daughter is," Park Eun-mi, the mother of a missing 17-year-old girl, told a television crew as her boat approached the salvaging site on Wednesday. Lee Geum-hee, the mother of another missing student, said, "We just want one thing — for the ship to be pulled up so that we can take our children home."

Once the ferry reaches a port 90 kilometers (55 miles) away in the city of Mokpo, in about two weeks, workers will begin clearing the mud and debris and search for the remains of the missing victims. An investigation committee will also be formed to search for clues that could further explain the cause of the sinking, which has been blamed on overloaded cargo, improper storage and other negligence.

A group representing the families of the victims issued a statement demanding that it be part of the investigation committee. Many bereaved family members and their supporters have been demanding a more thorough investigation into the government's responsibility over the sinking, questioning why higher-level officials have not been held accountable.

The ferry's captain survived and is serving a life sentence after a court found him guilty of committing homicide through "willful negligence" because he fled the ship without issuing an evacuation order.

Park was forced to defend herself against accusations that she was out of contact for several hours on the day of the sinking. The allegations were included in an impeachment bill lawmakers passed against Park in December, amid broader corruption suspicions.

Park was formally removed from office by the Constitutional Court earlier this month. She is now under criminal investigation over suspicions that she conspired with a confidante to extort money and favors from companies and allow the friend to secretly interfere with state affairs.

In a meeting with Cabinet ministers, Prime Minister Hwang Kyo-ahn, South Korea's acting head of state, urged officials to do their best to ensure a successful job salvaging the ferry, and instructed them to plan a thorough and quick investigation once the ferry reaches the Mokpo port.

Salvaging the huge, corroded ferry from a channel notorious for dangerous currents has been a difficult and expensive job. South Korea agreed in 2015 to an 85.1 billion won ($76 million) deal with a consortium led by China's state-run Shanghai Salvage Co. to do it.

While many large shipwrecks around the world have first been cut into sections to be raised, this was never an option for Sewol because there are hopes of finding the remains of the missing victims inside the wreckage.